Only got a couple, but hope these help a tad.

I myself don't know all that much about them, but have you ever played Hegemony: Philip of Macedon or Hegemony Gold? As you play the main campaign it gives you loads of historical information about them, and its not a very expensive game anywhere you buy it from. I would recommend giving it a shot.

I don't think the Illyrians are really worthy of their own faction. It would probably be best to represent them simply as peltasts in the Macedonian faction. 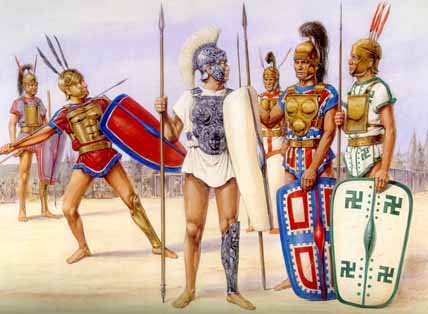 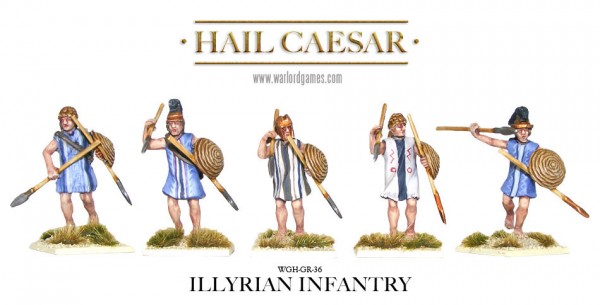 i dont think AD illyrians would be of to much help

And images 2 and 3 are of Samnites and Campanians among other Italian peoples, not Illyrians.

I have something about Illyrians:

I thought these guys were Iberians rather than Illyrians.

I thought these guys were Iberians rather than Illyrians.
Click to expand...

Agreed looks like a Spanish infantry in Carthage army.

Yes I believe those are Iberians not Illyrians. Hey Eugen, post that pic in the Carthage thread too! Nice find.

Stevon said:
Yes I believe those are Iberians not Illyrians. Hey Eugen, post that pic in the Carthage thread too! Nice find.
Click to expand...

I thought these guys were Iberians rather than Illyrians.
Click to expand...

Agreed looks like a Spanish infantry in Carthage army.

Yep, I recognized the hats (helmets? What are they made of?) which seem particular to Iberians, but also the Iberian scuta and caetra shields, plus the falcata choppas.

BATO I: One of the most famous Illyrian Kings

It is supposed that The Illyrian since the 4th century BC had warrior formations which did not differ from Macedonian phalanxes.

Those men when not using their boats to plunder enemy coasts or shipping, are on the lookout for easy pickings, be it from the enemies that surround them or other Illyrian tribes in their vincinity. Their helmet is a standard Illyrian helmet, simple and trustworthy. Armed with a crude mace, and a rope that they use when they assault enemy ships, to either grab them using hooks, or tie up their slaves after the fact. Rowdy and fierce against unarmed civillians, they tend to flee when armed enemies arrive. Brilliant in ambush and cunning in deceit, they can fill the ranks, but not quite hold them.

Historically, Illyrians were notorious as pirates of the Adriatic. Their tribes, used small boats and ambush to offset any quality or quantity of troops stacked against them. They were very succesful. Agathokles of Sicily organised colonising expeditions in the Northern Adriatic, with stopping Illyrian piracy as a stated goal. Later it got worse. In fact Romani first expanded across the Adriatic, as an attempt to stamp off their acts of piracy.

The Illyrioi field a light cavalry that has surprising tenacity on the battlefield. Armed with spears and axes, they are ideal for riding down routing infantry and attacking the flanks of vulnerable phalanxes. While not quite as useful as some cavalry, they have a definite presence as a somewhat inexpensive all-purpose melee cavalry.

Historically, the Illyrioi were a people that inhabited modern Albania, Bosnia, Croatia, Slovenia, Serbia and Montenegro. They were greatly influenced by their Hellenic neighbors to the south and their Makedonian neighbors to the east, but managed to stay fiercely independent until conquered by Philippos of Makedonia and Alexandros of Epeiros. That same fierceness allows them to be a reliable and fitting unit for any Epeirotes general that is clever enough to control the wild Illyrioi provinces.

Lighter than the Hellenic Hoplites, that they used to fight, and equipped with a different shield, a deffinite Keltoi influence, the Illyrioi Thureophoroi, can hold the line, if needed, but their role was to harass rather than fight, and shower the enemy with spears from afar, not go up against it. At this they excell, as it is the very lack of armor which makes them very agile. Only their bronze Illyrian helmet can be considered armor as well as their thrureos shield. They carry a healty amount of javelins which they throw at the enemy but when it comes to close action with their spears, they leave a lot to be desired.

Historically, Illyrioi were hammered by the same force that destroyed Makedonia and killed its king, Keraunos: the Keltoi. As one of the nations to border with them, the Boii nation of them, they did use a lot of their methods in fighting and mixing with their own peltasts, a heavier version was created, the Thureophoroi. While lighter than Hellenic Thureophoroi, they are as good as them or even better when it comes to harassing the enemy and especially pike phallanxes.

This is all taken from Europa Barbarorum website, It's a mod for a game, but that doesn't make it unhistorical, it is the most historically accurate game mod i've seen, they took a good 7+ years developing it because they wanted to get historical facts on every single empire from Britain to India

These guys were crazy, are they greek hoplites, roman centurions, dirty barbarians or box champions?

If this matters (I just wanted to put something in somewhere, as stupid as it sounds, tho it's truth)