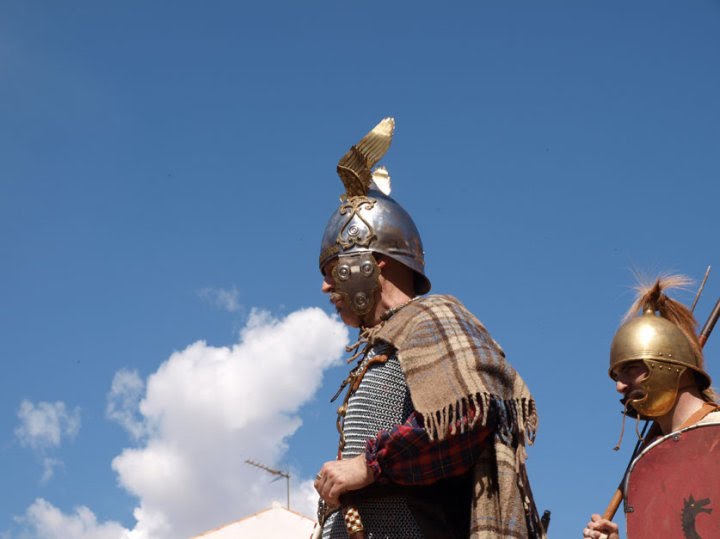 Not sure what year(s) you're looking for, but the siege on Numantia (around 134 BC) is one of the crucial events in the Roman-Celtiberian wars. I have an osprey for this if you want it I can upload it and link you in Skype.

Because you can't mix four different peoples in the same faction. i.e: you posted an image of a supposed Viriato warband in the spoiler and Viriato was not celtiberian.

This is a language map of the Iberian Peninsula at that time.

In modern days Portugal area lived the Lusitanians, the strongest People of the Iberia ( they were winning the war against the romans and almost conquered the entire Peninsula until Viriato, their leader, was assassinated by his "companions").

In modern days Galicia ( Spain) lived the Calocai ( or Galaicos), a Celtic people.

And in the center and South of the Peninsula you will find Celtiberians ( mixed blood or culturally celts with iberians) and Iberian Peoples.


P.S: Avoid at all costs Portuguese articles on wikipedia from the subject, highly biased and uninformed.

rgcotl said:
OK thanks
and maybe you know how the equipment looked of Lusitanians

at least visualization are for us an important thing and our mission is to show it
Click to expand...

If you want to have the work to do it, you can copy the armours and weapons the guys at Europa Barbaorum ( RTW mod) in twcenter made for the Lusitani and ( they made a great job in research) and make a Lusitani faction. In their site: http://www.europabarbarorum.com/index.html; you will find a lot of history research usefull for both iberians, gauls, lusitani, etc.

Hey all, I have a question about these white helmets on these pictures:

The droopy ones with the red crests. I was wondering what the material was, it loosk a bit like linen, but in that case it'd be rather useless as a helmet, surely? Or is there a (metal) cap underneath to provide actual protection? (Also, the knobby hat on number five is nice.)

Frisian, a common citation (I forget what ancient author) is that Iberians had "Sinew caps/headwear". I think that is the common depiction of it. I am not sure it'd be actual tendon flesh, so my view would be rawhide or leather

It may not be too protective but it could serve as a cultural headwear/hat fashion or simply offer some modest padding/thickness.

Since I'm from Portugal I'm interested in this faction. Got some cool links and pictures that may help. Also, since this mod gots a Campaign, will give some maps and info about it.

I don't know if you guys are thinking about working with this faction.

Some Information (Can be found on Wiki)

When the Romans encountered the Greek geographers they used Iberia poetically[clarification needed] and spoke of the Iberi.[9] First mention was in 200 BC by the poet Quintus Ennius. The Romans had already had independent experience with the peoples on the peninsula during the long conflict with Carthage. The Roman geographers and other prose writers from the time of the late Roman Republic called the entire peninsula Hispania.
As they became politically interested in the former territories of Carthage, the Romans came to use Hispania Citerior and Hispania Ulterior for 'near' and 'far Spain'. Even at that time large sections of it were Lusitania (Portugal south of Douro river and Extremadura in western Spain), Gallaecia (Northern Portugal and Galicia in Spain), Celtiberia (central Spain), Baetica (Andalusia), Cantabria (North-West Spain) and the Vascones (Basques). Strabo says[5] that the Romans use Hispania and Iberia synonymously, and distance them as near and far. He was living in a time when the peninsula was divided into Roman provinces, of which Baetia was supervised by the Senate, whereas the others were governed on behalf of the Emperor. Whatever language may have been spoken on the peninsula soon gave way to Latin, except for Basque, protected by the Pyrenees.
http://en.wikipedia.org/wiki/Lusitanian_War
http://en.wikipedia.org/wiki/Roman_conquest_of_Hispania
Story about Viriathus - Important Character 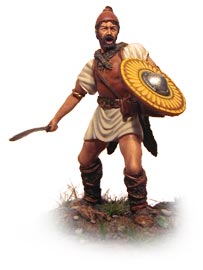 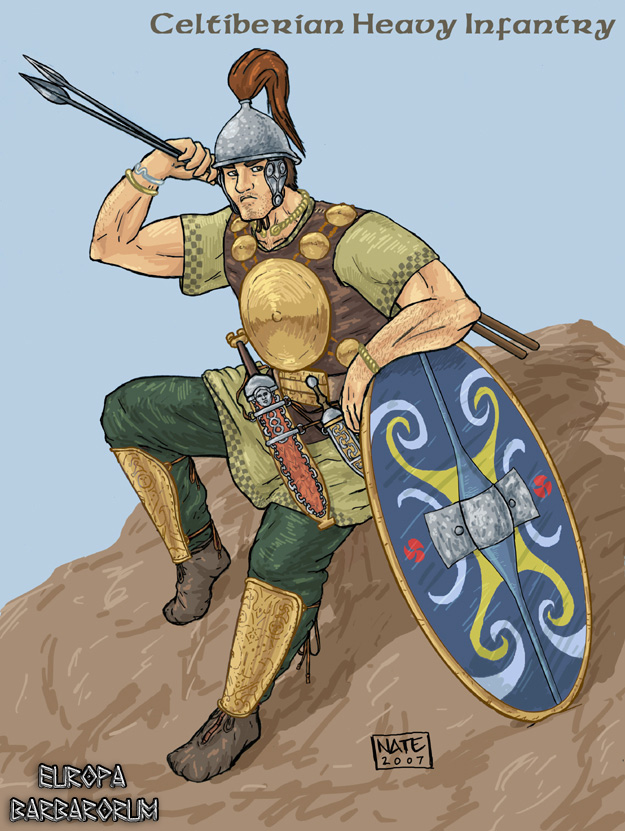 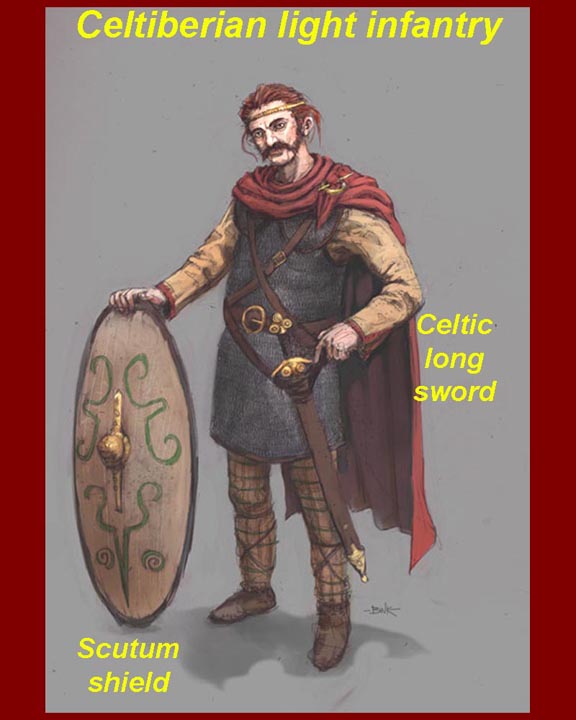 Video about a battle - You can see some gear

Overall Comment:
For what I saw and for what I heard, they used small shields, medium swords maybe the same ones as the macedonia. Light armor. Their gear was really close to the celtic gear. They won battles by using the high ground. They understood that romans tactis were basicly forming squares, that kinda of tactics could only work on flat ground. The Iberian tribes realised that they could stop the roman troops at the pyrenees. This tactis used by the Iberian tribes was applyed by Viriathus. He was born in actual portuguese territory. The Romans realised that Viriathus and his troops were with good moral and they didn't lost any battle. Romans decided to pay to some closest friends of Viriathus saying that they would get better clothes, life and a better house for their family. Viriathus lost his life wile he was sleeping. When the rest of the army discovered that, they gave up. Years have passed and the romans took the most part of the territory (this can be found in the map).

Hope this can help you guys.

Don't forget the carthaginians had a hold on spain. Hannibal had his 50,000 men (mostly mercenaries) in spanish territores and invaded rome through the alps.

Also, the romans adopted the spanish "gladius," so they both had the same swords.

DanielValdemart said:
Don't forget the carthaginians had a hold on spain. Hannibal had his 50,000 men (mostly mercenaries) in spanish territores and invaded rome through the alps.
Click to expand...

DanielValdemart said:
Also, the romans adopted the spanish "gladius," so they both had the same swords.
Click to expand...

Please use the "Modify" buttons instead of double posting. Also try not to point out the most well known things of a faction, should go without saying that we kind of know that stuff already.

Iberians during the siege of Numantia 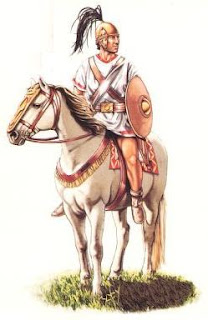 This is my first post so I have no idea what I'm doing with regards to formatting. Feel free to correct me or even copy this and fix the formatting yourselves (make it neater/clearer or whatever).

I'm gonna copy paste a bunch of research that was done for Rome II Total War Iberian mod that I believe will be very useful to you:

A note on tribes:

All the Lusitani, the Celtiberi and probably the Cantabrians too, were either celts or heavily influenced by celts, so they might be similar to an extent to gauls.

I'd say the more unique cultures were the Turdetani (because of the Tartessian Heritage) and the iberians (which were influenced by external cultures, like the phoenicians or the Greeks, but retained their original "feel"). Visually they are quite more unique too (although, again, they will probably be present in the carthaginian roster).

The Vascones were very isolated and part of the distinct Aquitanian culture, so they might be quite unique too (though i'm just guessing here, i have seen very few archaeological evidence of the actual "looks" of the northern tribes).


The only peoples that were not of indo-european culture in Hispania were the Aquitanians, the Iberians and those of Tartessian heritage (mainly the Turdetanians, although they are often included in the iberian group).


Also, those tribes that were more influenced by Greeks bring some interesting options to explore. I always liked this drawing of an Ilergete from the present-day catalonia (i don't know to what extent it is historical, but the greek influences from the nearby Greek colonies of Rhodes and Emporion bring many interesting design options, like iberians with corinthian helmets).

The falcata, it was mainly used in the iberian (south and levant coasts) zone, and to some extent, by the celtiberians, but not by the celts (check the spoiler below). So, again, nothing to do with the Lusitanians (which were heavily celticized). As for the triangular-shaped dagger, I'm not entirely sure but i believe its the same. 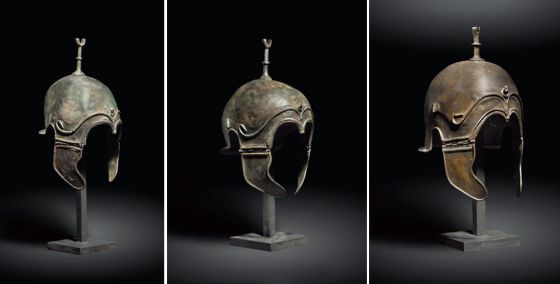 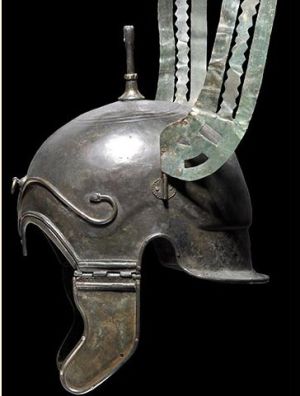 The warriors of the different tribes: 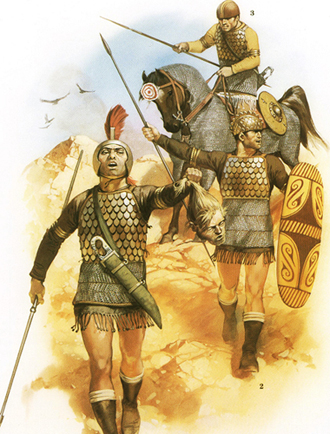 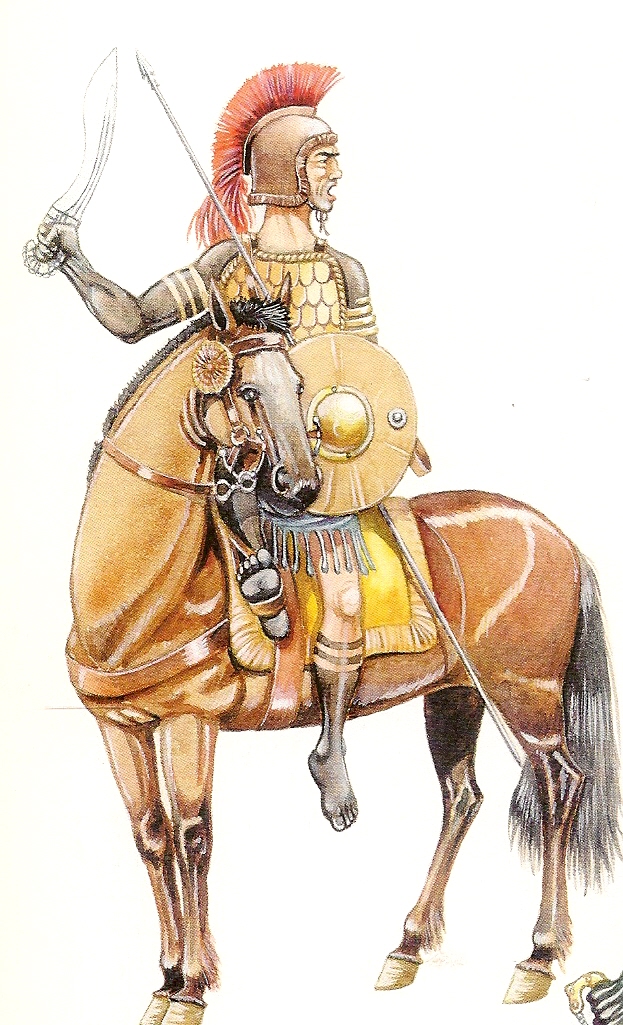 Also based on that vase, some people have assumed they used body painting/tattooing (?) (check the black drawings in legs and arms), but I doubt there is actually any real reference for that other than the vase, it could be any kind of ornamental piece. In the other hand, I seem to recall reading somewhere that that vase depicted warriors in ceremonial garments, so body paint could make sense if it's any kind of ritual.

Celtiberians (present day castille): These people, as the name implies, were a cross of iberian and celtic influences:

There is much more in depth knowledge of iberian tribes in the full post:


If you want to know more, I suggest this other Rome II total war mod post which has loads of pictures of the units they made, they also look pretty great: