Let's just see if it works better or worse. I'm sick of getting killed by a menavlion/glaive wielding defender courser as soon as I spawn. I rush outside with cavalry in sieges too. It is just too OP and breaks the "siege" feeling.
Believe me when I say I'm not a good player. I have never played warband multiplayer and I've like 50 hours in bannerlord multiplayer. I shouldn't be able to get a score like this just rushing out with cavalry. 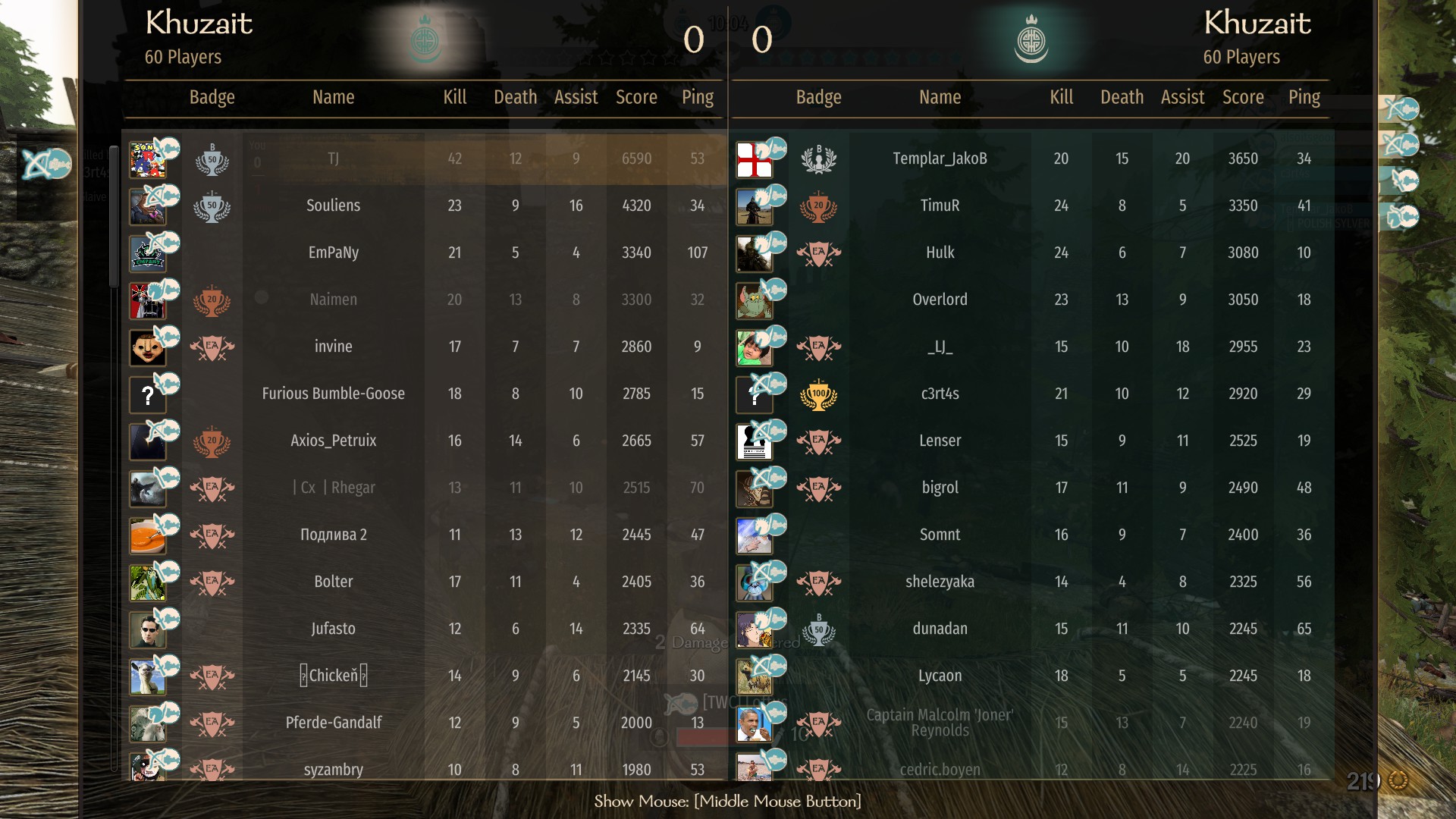 You've made out the issue but I believe your solution to be the wrong one.
Glaives and Menavlions on horseback are brokenly OP - on all gamemodes. The weapons should be nerved or taken away from cavalry completely. Changes to siege specifically aren't necessary.

I don't believe the weapons are the sole problem here. When attacking, I want to be able to focus on assaulting the walls instead of getting picked by cavalry every 5 seconds. Lance, spear, it doesn't matter. Either restrict defender cavalry from getting out or find another solution but in my experience no attacker enjoys this.

I can't believe how dominate horses are in those enclosed spaces within a castle. In Warband it felt more suicidal to be on horseback once inside, here they just destroy.

JimmyCakes said:
I can't believe how dominate horses are in those enclosed spaces within a castle. In Warband it felt more suicidal to be on horseback once inside, here they just destroy.
Click to expand...

Maybe it's because of the bump mechanic.

lockefeer said:
I don't believe the weapons are the sole problem here. When attacking, I want to be able to focus on assaulting the walls instead of getting picked by cavalry every 5 seconds. Lance, spear, it doesn't matter. Either restrict defender cavalry from getting out or find another solution but in my experience no attacker enjoys this.
Click to expand...

On the contrary, I love it when half the defending force is running outside the walls on their horses. Means there's less of them actually defending the flags, which is all you really need to worry about in siege

To be fair I've yet to see cavalry achieve much on either side in siege. It's the issue with public pickup games though - in theory it could be useful for the defenders to sally and stall the siege equipment or hit the attackers in the rear while they're trying to force the gate. In theory the attacker cavalry could be useful to break through defenders behind said gate. That would require some level of organisation though - in practice all I've seen is random cavalry tearing around the place, usually chasing each other, and at best proving to be a slight annoyance (more usually their habit of running solo or in ones and two's simply means they're gold fodder for whoever can be bothered to chase them down). It's pretty much at the point these days I only bother attacking them in passing to break up the otherwise monotonous slog to whichever point the actual fighting is happening.

I mean. It's siege... The more useless cav there are in your base the fewer there are in the castle. I think it's a wash in siege because the stupid cav players leave all the gates open. Which helps disproportionately to the amount of kills they get hurts in a game mode with infinite lives. It's let me capture quite a few castles that otherwise might have held when attacking, but usually leaves me on door duty when defending. If they don't end up changing things about how cav are outfitted (and they could still loot anyway), the solution that comes to mind is on the mapmakers. If you look at the WB native siege maps and the BL siege maps (so far) there is a lot more stuff in the way to break up cav and provide cover. It's not perfect and probably wont ever be perfect, but they provide something against cav leaving the castle. Best bet for attacker is to stick to cover, use the ~ key and pay attention, and keep advancing; cav are looking for people who aren't looking.

Thinking on it more as I type this, maybe letting defenders sally out (spawn cav) for the first 5 minutes, or something. Then imposing either a restriction or limit on cav. But then that would be unfair the the kherghit (I got to learn the new names) faction, but then they don't belong in siege anyway; or at least at a reduced percent chance to appear. Dunno if that would work, probably not in the way intended.

[email protected] said:
Best bet for attacker is to stick to cover
Click to expand...

Given the number of arrows in the air, I'm pretty sure that advice would hold even if they removed cavalry entirely

Siege maps were designed in a way that cavalry would be useful. Once the gates are broken they can start swarming up the insides of the castles and the defenders can test their luck by thinning the numbers outside the walls. I think it's pretty fine. Makes the defence/destruction of the gates much more important than scaling walls.

If you’re getting killed by cav in siege then you really just suck at the game. Don’t ask for a nerf because you can’t move between cover for fifteen seconds till you get to the wall lmao. Terrible suggestion.

JimmyCakes said:
I can't believe how dominate horses are in those enclosed spaces within a castle. In Warband it felt more suicidal to be on horseback once inside, here they just destroy.
Click to expand...

So true. Thats even worse than charging defenders. Horses are too mobile. You can ride through countless people. Riding against obstacles almost never stops you. When you are stopped you can continue riding within half a second...

The maps were clearly designed with cav in mind and to have space to move around even inside the castle walls. Having a certain class not be included in a game mode is stupid and just lazy game design thankfully they didn't take this route. Cav pushing out killing people trying to make it to the wall is legit strategy. Don't call for nerf because they are fulfilling their intended role.