1) Specify where I stated they had loads of armor.

2) The heaps of armor I mentioned;


Mamlaz said:
Or do you mean to tell me that all that heap of armor mentioned in the previous decades vanished into thin air?
Click to expand...

Meaning, I was going by the descriptions in the decades preceding the war.
Click to expand...

Now you are being disingenuous. I was pointing out to you that many would not have had armour, particularly as the war went on. You here clearly state there was a heap of armour mentioned in the decade previously yet you did not provide a clear source for this other than sources, yet again, saying what the soldiers should be wearing, not what they did wear. The records from the Tower of London in 1642, the main armoury in the Kingdom, show that there was some armour including 60 suits of cuirassier armour (barely enough for one troop of horse). About 2300 corselets had arrived from the continent (note they had to be imported) for Essex's army by Edgehill for his 12,000 foot (Old Robins Foot, p.45) and, as mentioned, no armour was purchased for Essex's army after early 1643, even after the disaster at Lostwithiel.

EDIT: We will end this here I think and get back on track. I have slowed up with the mapping for the moment, hopefully I should at least have the Marston Moor, Powick Bridge and Auldearn maps done before the mod releases. Dangerdude said:
Im just going to ignore this very interesting discussion and post a trumpeter which I have been working on today

He's beautiful.
Reminds me of this Royalist figure 'For King or Country' did: And there is this one of the Earl of Essex's Regiment of Horse: Quick update, we are slowly but surely getting there with the mod. We do apologise for the delay and all but as mentioned issues have cropped up that have delayed it a bit. Can't give an exact date at the moment I am afraid.
In the meantime here is a map I have nearly finished based on Powick Bridge, the site of the first battle of the Civil War in 1642. Ironically the last Battle (Worcester) would be fought nearby in 1651: 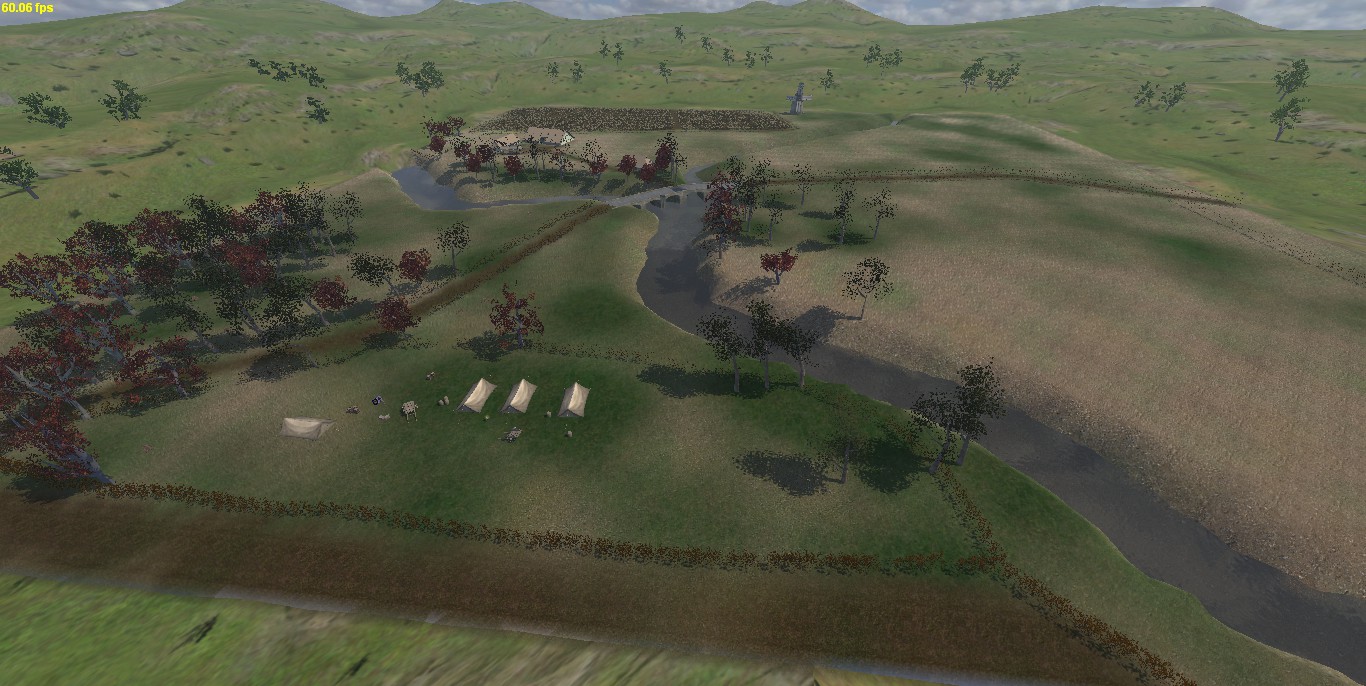 I haven't quite done the right hand side of the map although from what I gather it was largely made up of enclosed fields so it will be fairly open.
Also I have making an attempt to create a scene prop of the Banqueting House at Whitehall: I only put the picture of the ceiling in for reference for the moment. If I get it finished then it may make an appearance in the mod.
Not much else to report, again if you want to make a company or troop (equivalent to a NW regiment as previously discussed) then please get in touch, I have now uploaded some of the officer lists. We are also still looking for a female to record a few lines, anyone who is Scottish or Irish would be useful a well since there are some Scots and Irish regiments in the mod. I have been working on a few new scene props for the mod recently. This one I did of a parish church is nearly complete: Most of the textures are ones already used in Mount and Blade: Warband save for the Royal Coat of Arms. If I get time I may make some new textures but for now these ones will do. It needs a bit of tweaking here and there but it is nearly done. I did not make any pews, pulpits etc. since most of these things can be made using existing items, plus it means the churches can be laid out in different ways depending on the map. Let's hope this will become a good mod. Best of luck!

BerserkerRezo said:
Let's hope this will become a good mod. Best of luck!
Click to expand...

Thank you, we are working hard on it!

The sash looks really nice, but the whole uniform set is 7800 faces?

Well, I have no idea what faces really mean. Is such a high number bad?

Faces(Which can be triangular, quadrant, in Warband's case it is triangular) are basically the physical surface components of your model. For example, a cube has 6 faces, a pyramid has 5 and a rectangle has one face.

Your body armour as a model is a collection of many faces(tris/triangulated faces) which gives it that complex shape. Looking at Native, body armours usually have between 500 and 2000 faces, most mods extend that yo have some more quality armours up to 4-5 000 faces but I do think in this case 7000 is a very high and unnecessary number which might cause performance issues.

BNS Marko said:
Faces(Which can be triangular, quadrant, in Warband's case it is triangular) are basically the physical surface components of your model. For example, a cube has 6 faces, a pyramid has 5 and a rectangle has one face.

Your body armour as a model is a collection of many faces(tris/triangulated faces) which gives it that complex shape. Looking at Native, body armours usually have between 500 and 2000 faces, most mods extend that yo have some more quality armours up to 4-5 000 faces but I do think in this case 7000 is a very high and unnecessary number which might cause performance issues.

Black Watch made it. He is pretty new to modelling so you have to excuse him

Anyways, our scripter finally managed to add ensigns and drummers to commander battle. There are some bugs left though, so we will show pictures as soon as its fixed

I haven't used it before, but supposedly meshlab does a fairly decent job at mesh reduction.  If you only expect a few players to wear that sash (1 or 2), it might be fine without reduction if you don't have a lot of other meshes that have 7800 faces as well.  Significant LODs would also help out.  On a similar note, I also work with the 17th century osp, and the musketeer kit (cartridge kit) is expensive (but necessary) at 2500 faces if I remember right.  To compensate, I remove the leather bag on the back, because it is expensive for how little it adds.  Otherwise, it looks like you guys are coming along, can't wait.

Drummers and Ensigns in Commander Battle by randomcode​ Very good. This needed to be made. Looking forward to it.

YourStepDad said:
Very good. This needed to be made. Looking forward to it.
Click to expand...

Thanks  . There is so little stuff to do on this mod left yet it takes so much time.

I recently posted a new historical guide on the forum discussing the tactics used by the infantry during the English Civil War:
http://steamcommunity.com/groups/pikeshotte/discussions/0/133263024014397104/
It is not perfect but it should give a rough idea of how they fought and how companies should train their troops for events. We have been considering having a pre-release event using the Deluge mod as a test run to see how we can best run events using these tactics. We are in need of more companies to take part if said event does go ahead so if you do wish to form a company then please request one on this page on the steam forum:
http://steamcommunity.com/groups/pikeshotte/discussions/0/276237094318290455/
There should be a link to the officers list I have complied, if you can't find them then PM me on here and I can send them over to you. Nothing is definitely organised yet with this event but it would be great if we could get something together.
If you want to see any other historical guides then you can make a request on the Steam page and I will see if it is doable.

I should just clarify as well, I made the sash on that model others were discussing about earlier (which is what Dazzer was referring to), the armour, buff coat etc. is originally from WFAS as far as I am aware. Will/Wilhelm also did quite a bit for us in the past (think he is working more on mods for Total War: Attilla now) including some artillery pieces from what I recall. I am fairly new to modelling so I am mainly adding a few bits that have not been done like monteros and a few sashes. I have been working on a  few scene props like this church but they won't be in the initial release of the mod:
http://imgur.com/Ys3pUNE
http://imgur.com/neBEiTb