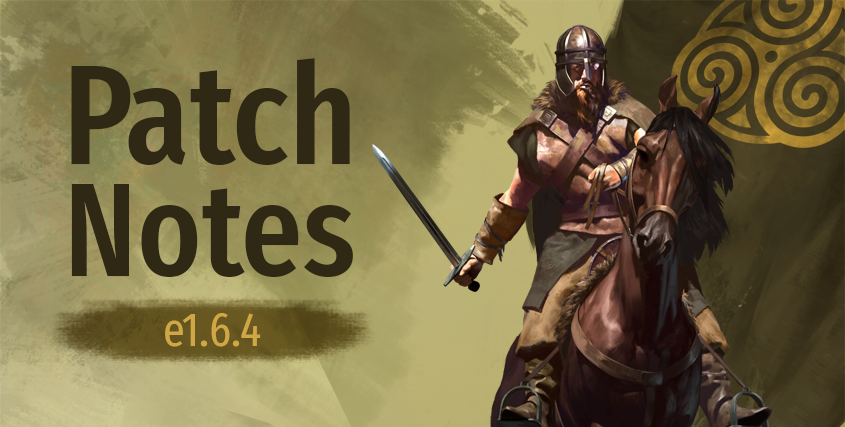 Hey! First thank you so much for the notes and efforts.

But, WTH! It requires 9.4 GB download and overwrites 35.9 GB in total That is good I believe, however just wondering why since there are only few Art entries in the notes.

love the multiplayer changes, thank you so much for your work!

Why was the riding lvl requirement for Saddle Horses not lowered with this patch? There are still no horses which can be equipped with a riding lvl below 10, meaning that the only way to train riding for these characters is through tournaments (an extremely cumbersome method for companions).
Last edited: Oct 25, 2021

Love the addition of iron sights on ballistae, but I don't think we needed to increase their rate of fire. RN, they are pretty much tripod HMGs with their current balancing

? - "Attacks now take into account the relative movement speed between the attacker and the target when deciding if an attack will bounce or not."

Probably the most interesting addition.

Seriously?! After so long time another just crash fix? Anyway, multiplayer game still crashes from time to time, never seen that at any other game..

How about reevaluating essential basic game concepts, which made M&M:Warband great at its time and Bannerlord is still missing.

1.Think about fixing this ridiculous swing arc hitting at its arc start and end at full? Have you ever consulted this with actual sword fencer (applied to all weapons.) Cannot count how many times I've been hit by an enemy not even attacking me or even knowing of me...
2. Friendly fire/dmg, especially in melee is a must. Look at current multiplayer games. Gang of several players from one team in a form of 2h swinging rollball hunting isolated enemies as they spawn. This cannot be stopped, blocked or fought.
3. Too cheap super fast cavalry. Make it expensive, so it won't change to cav fest. Or drop its fastness. Just ruining a lot of games, being consecutively run over from behind in the middle of a melee fight.
4. New maps required, a lot. Maybe also some cav friendlier open map, camp, field fortifications whatever... Where else you want to play some horse archers? What happened to that medieval castle for siege?
5. Multiplayer spawns? Why not some spawn safe zones, with multiple exits on map edge, equally for each team? Rather random, even behind back spawning... sucks for a modern game..

I do still believe for my beloved game successor improvement, but its pace is really disappointing.

Its crashing a lot more than in the previous patches.. With that i mean during the game

@Callum was the hotfix just posted only for 1.6.4?

I guess no one at TW watched this anymore

Neither singleplayer nor multiplayer won't start after I update the game and my graphic card is ondate. Help please

ACG-925 said:
Neither singleplayer nor multiplayer won't start after I update the game and my graphic card is ondate. Help please
Click to expand...

If you are using steam, check integrity of files. Somehow an unannounced hotfix or something broke my launcher, if you are in same situation, do that so Steam will download missing file and you can play again.

can we know what was causing the servers to crash?

i lost all my workshops after my hero died. Is this intended ? I mean the clan still exists with companions and 1 castle and wife is heir but all my 4 workshops disappeared. (They are not in a town which got conquered from enemy).

Who thought of these new prices in multiplayer? Completely ridiculous.
You must log in or register to reply here.

POLL: Your reviews of the COMPLETED FINAL Bannerlord
2 3 4