Introduction:
I am Dekkers and I've made many Persistent World scenes such as Skyrim, Rhadaron, The Holy Lands, the Stormlands, Game of Thrones (Edit of Mike's remake and the original), War of the Three Kings and the North. I've always wanted to create a city map, but with my old PC it was simply impossible due to performance issues and I know it's unlikely that any SO would want to use a scene that's so 'heavy' if that describes it properly, as it'll have a lot of props. Anyway, I gave it a go but as I am having surgery soon I will not be mapping much more and thus I decided to publicly share it, so that if anyone feels like finishing it he/she can do so. This also means that anyone can use this map on his/her server.​

Concept:
The scene consists of around 50% city and 50% landscape. The landscape is roughly finished and contains farms and trees (resources) for the items in the city. The city is full of houses (obviously) and has several factions, some in fortified places, some inbetween houses. There are a lot of taverns and markets, where players will be buying their armor, as the factions won't have armors in their own armouries like they're likely used to. Most of the city can be accessed with the exception of a few places I blocked off as they are so far from the interesting places that no one would go there anyway and so that I spare some props.​

Images [Outdated!]:
The city from above

The city from the front

The city from one side

The city from the other side

The city from the port side 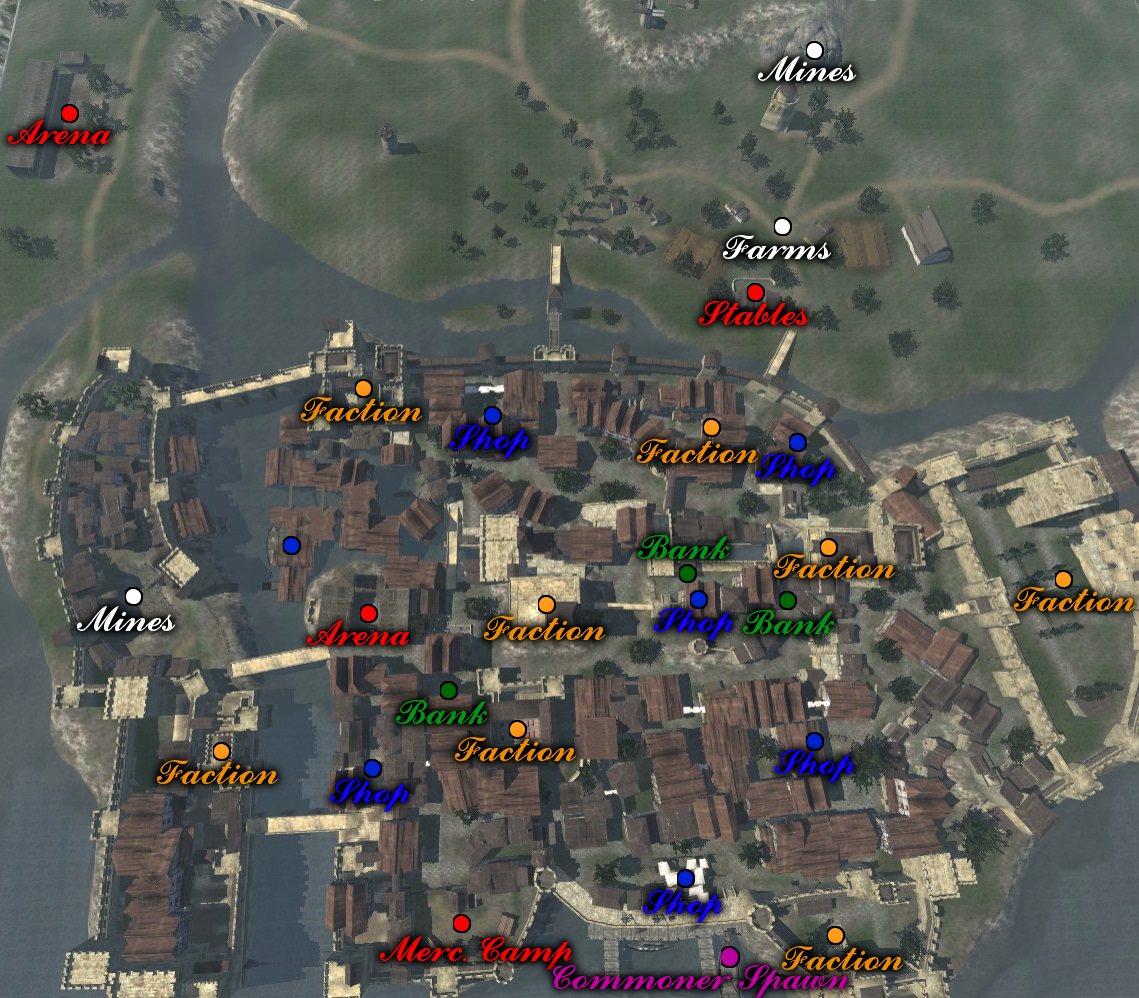 Contact
Wish to ask me any questions? Add me on steam: http://steamcommunity.com/id/Dekkers147/
If you send me a PM on taleworlds it's unlikely that I will read it as I don't browse these forums very often.
You can also ask any questions regarding the map on this topic.

Looks very nice, will be an interesting map to have wars on, lot's of ambushing I would assume.


Froi said:
Looks very nice, will be an interesting map to have wars on, lot's of ambushing I would assume.
Click to expand...

Btw - I forgot to mention that I will probably do some updates myself, I will post the latest version here when I do and I will mention what I updated.

I assume this is the only forum you are not toxic on, dear Dickers.

Hagaron said:
I assume this is the only forum you are not toxic on, dear Dickers.
Click to expand...

I am only toxic when there's reason for it men

That hasn't been the case here (yet)

Looks very good. could have expanded the outskirts and placed some textured fields , and an under-city sewer system

bpopa27 said:
Looks very good. could have expanded the outskirts and placed some textured fields , and an under-city sewer system
Click to expand...

The outskirts still need work, but a sewer system would be too demanding. It requires a lot of props, unfortunately.

the maps just over 400kb it wont lagg, trust me i've done it before,  unless u got a potato pc

bpopa27 said:
the maps just over 400kb it wont lagg, trust me i've done it before,  unless u got a potato pc

I don't have a potato PC anymore, but there will obviously be people who might play it who do have one, so I have to keep it minimalistic. I'd love to do a full scale sewer system, but I'd have to use a lot of props to cover up the ground and for the tunnels themselves, which isn't worth it IMO

Also, map size is at 500kb now and still not finished.

Now that I am starting to feel better after the surgery I had 2 months ago I continued working on the map.

Download for anyone who wants to work on it (it is not playable yet, for the server owners that is!)

Keep working great job! I will try use this.

Before you get hyped, performance is likely to be terrible for people with a toaster PC.

Sorry for the lack of progress. PW is (finally) dying off and frankly I can't be arsed finishing a map that will very likely never be used.

looks really close-knit. i would have to agree it'd be a definite change of pace from the usual PW maps.


Dekkers said:
PW is (finally) dying off
Click to expand...

Out of curiousity, what's the standpoint on this map? It seems super close to being finished!? Looks amazing by the way.

Also, simple question. What style of PW do you see this map pertaining to? What I mean by the question is, is it built for slight RP purposes or head to head combat like larger maps supply?
You must log in or register to reply here.