What started as a small personal project, has over the course of the year developed into some kind of overhaul of at present most and maybe eventually every major settlement scene in TLD. The original TLD scenes, while still outstanding, were designed as light as possible to run on even the weakest computers. However, to me, some settlements (especially Dale and Minas Tirith) felt a bit too small, so I started expanding them. Soon, I also modified sieges in order to make them a bit more interesting, challenging and, all in all, meaningful, even more so since sieges are so rare in this mod. Right now, the collection consists of some scenes that are slightly modified, some more heavily changed and then some completely new creations.

Just as TLD, this package is an OSP, so you're free to change, re-upload or incorporate it into other mods. Please give me some credit.
Keep in mind that you'll need most if not all of the TLD scene props to use these scenes. In the package, I only included those props added or modified by me.

Please be also aware that some scenes are far bigger than their original counterparts. They will all take some time to load and may or may not cause lag on older machines, althoug I tried to skimp on particle effects like smoke. For comparison: I have a low-mid-tier rig with an Intel i5 4570 and a Radeon R9 270X and all scenes run fine.
If you use battle sizer, I recommend reducing the battle size to ~100 for sieges. Not only for performance reasons, but also because I think this gives you a bit more time to enjoy the scene.
Not all sieges are thoroughly tested, so please let me know of any problems you encounter.


Hints
- Some siege scenes (especially Minas Tirith, Hornburg, Dale) offer you different ways of entering the fortress (through the gate, over the walls etc.) Save before the siege attack and take your time figuring out which route works best for you. Pay heed to where your allies need your assistance most or where you can overcome the enemy's resistance more easily. Often, it pays to not charge head over heals into the biggest fight.
- Don't sneak into Moria if you're not able to fight a troll on your own.
- In some scenes, it can be quite hard to find the guildmaster and the traders. Smithes are most easy to spot, just look for weapons. Traders are usually surrounded by boxes, barrels and food. Guildmasters often stand at luxuriously decorated places, have a table and usually book or two nearby. If you still can't find them, open this spoiler:

The Towers of the Teeth

The city of the wraiths

Approach through the haunted woods

Credits
The original and current TLD team for creating and keeping alive this great mod. This OSP is also meant as a tribute to you. TLD for M&B .808 was my reason to buy this game in the first place.
Gutekfiutek for some textures I recklessly stole from his great Polished Buildings pack
Ruthven for some water particle effects which I did not yet manage to get to work properly |-)
Crusaders Way to Expiation Mod: some meshes
Slawomir of Aaarrghh: OSP Map Icons Pack

Make sure to install this submod last, i.e. install the latest (compatible) nightly patch and/or Snouz' TLD Warband Asset pack before this mod! Otherwise the scenes might not look as intended.

Unpack the package into your TLD folder (create a backup first!), allow to overwrite. 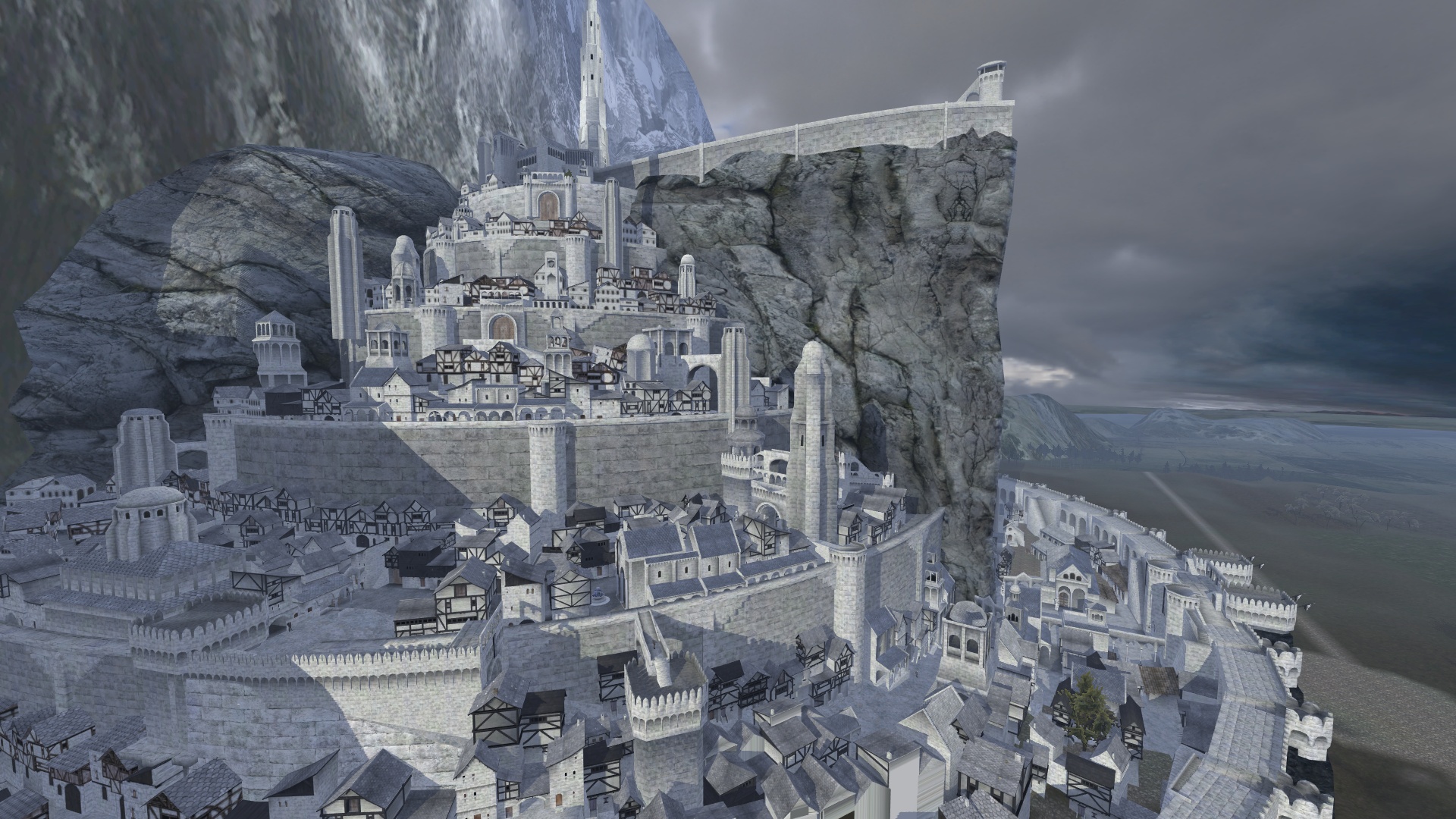 An overhaul of at present most and maybe eventually every major settlement scene in The Last Days (TLD). The original TLD scenes, while still outstanding, were designed as light as possible to run on even the weakest computers. However, to me, some settlements...

Great! You should open a thread in the Steam Workshop page for TLD

These are really cool. I'll have to test how much of a performance hit they are, and if the sieges work properly. (and perhaps if they work better than the default ones)
Expansive scenes are great, but we've learnt hard enough that players need the important bits in one places, so the settlements are not a pain in the ass to use regularly. (not just to explore)

Mr.Milker said:
a pain in the ass to use regularly.
Click to expand...

I might be slightly guilty of that, yes.
However, ususally the walkable area is rather small in most scenes and the only settlements that have the traders and the major apart from each other are (I think) MT, MM and Dale.

Some sieges are a bit experimental, so I'm really dependent on feedback, here. My own preferences might be a bit off.

Whoa, these all look fantastic, I might have to give TLD another play through soon

Does "no new siege scene" means they cant be besieged?

SixRibbons said:
Does "no new siege scene" means they cant be besieged?
Click to expand...

SixRibbons said:
Does "no new siege scene" means they cant be besieged?
Click to expand...

It just means that there's still the original TLD siege scene. Adding a Hornburg siege will be the first thing I do when I come back home, next year.

These all look great, I will try them in my next TLD game

HoJu said:
Great! You should open a thread in the Steam Workshop page for TLD

Did so!  Thanks for the hint.

Pretty neat! I have pinned your thread in the Workshop so that it stays at the top.

Excellent work, especially flooded Isengard. Flooded... ?! I didn't even know that  it is possible. Can someone explain me how to flood Isengard? I know how it was in the Book: Ents and so on; but what about TLD?

Today, I realised that I forgot to place the suspicious man spawn points. So in some scenes, the man could be spawned in inaccessible terrain. Will be fixed in the next version.

Swyter said:
Pretty neat! I have pinned your thread in the Workshop so that it stays at the top.
Click to expand...

Sirg said:
Excellent work, especially flooded Isengard. Flooded... ?! I didn't even know that  it is possible. Can someone explain me how to flood Isengard? I know how it was in the Book: Ents and so on; but what about TLD?
Click to expand...

If I'm not mistaken, you can visit the flooded Isengard after Isengard (the faction) gets destroyed, as the settlement itself is not siegeable. I didn't test it, though.

In Vain said:
If I'm not mistaken, you can visit the flooded Isengard after Isengard (the faction) gets destroyed,
Click to expand...

Oh no, I haven't blamed you in mistake I just thought, that there was another way to destroy Isengard: with the help of the Ents or something like this.

Great work, looks very nice.
But there are some scene props meshes missing in the Brf files, such as almost all dale cupola meshes except dale_cupola_3  and some more meshes. Also some of the scene_props are located at some ood positions, like in dale, where one of the dale_plaza scene props  is blocking the passage behind one of the bridges above the water and another is  floating a few meters above the ground next to the main gate and some texture bugs on some buildings in general.
Also there are many more glitches like in Erebor where you can walk outside the walls at cetain places and see the sky outside.
Again these new scenes look beautiful, even better than the original scenes of the mod, but they're not completely finished as it seems and quite glitchy at some points.

Check the OP, Dale still misses some meshes because they're not OSP.  (That's the reason why I didn't embed the pictures but only linked them.)
Your description rather sounds like a wrong terrain code to me. Could you please provide a screenshot? However, I won't be able to do anything about it until I get back to my computer in mid-January.

For Erebor, I had to disable parts of the collision mesh and didn't bother to substitute it with barrier props. Because I didn't expect players to notice. Will do so for the next update.

Hard to pick a favorite from all those scenes, great work!

In Progress Somehow Our lords are prisoner at our own castle