I am making this thread because it seems that the TaleWorlds/BannerLord community are letting Obelix be heavily involved in things such as hosting when he was banned from the FSE Community/Napoleonic Wars community on Warband for his actions. We gave him several chances but he doxxed several players, ddos'd many more and is still doing this to date. Today is the easiest example to give you but he doxxed a player called BlackBeard as he had a photo of him in his signature (which I removed). It's worth noting in the signature that BlackBeard did post this himself it was a quote from another player. Both were removed as they are ofc a breach of the rules. 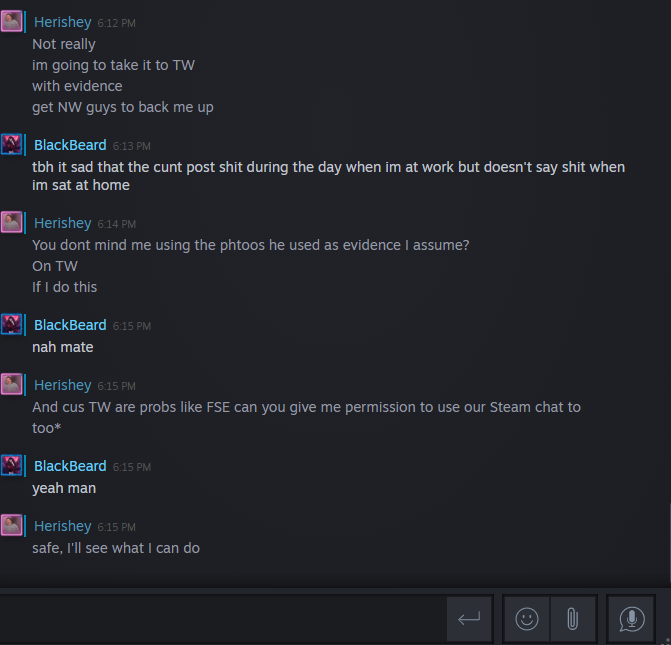 You can see here that he commented on his Steam profile around the time of the Dox to show how proud he is of his work; 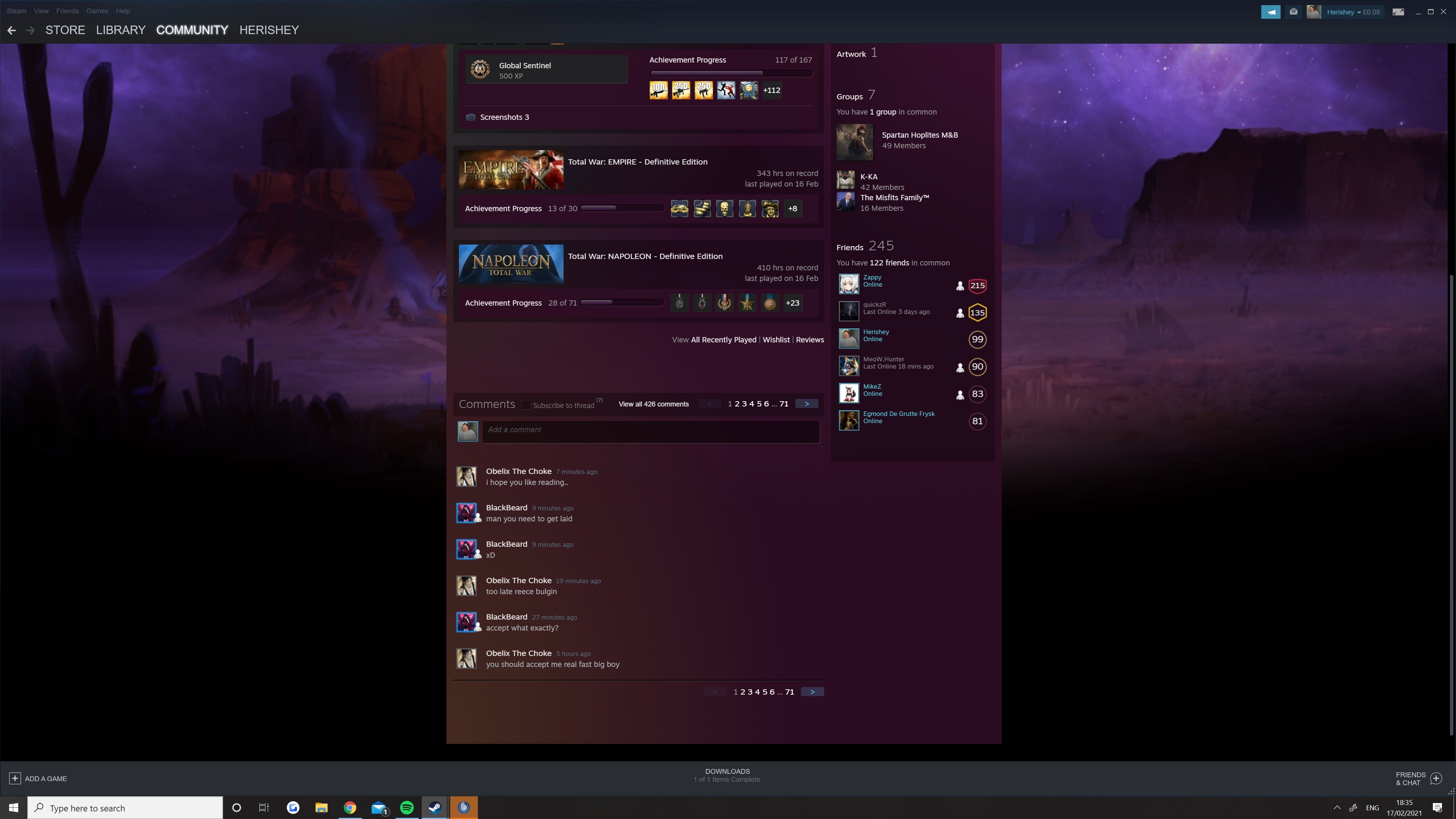 As for the dox itself it can be seen here below. I am a moderator on FSE so I have access to deleted posts.

WIthin the spoiler is these two images;

Now there are several other users from FSE that can confirm Obelix has done this to them. I won't name names as I'm not sure they'd be fine with me doing so but I can give examples of what he did;

Case 1 - Leaked family photos.
Case 2 - Found a familys Facebook added them and sent sexual photos to their family.
Case 3 - Leaked IPs, Emails, Addresses, Names and photos (that is the most common).
Case 4 - DDoS'd players during competitive Warband matches (again pretty common for him, even more so now we banned him from the community).

I can get you exact examples of each of those cases but I imagine those users would want to keep it private so it'd be via PM. I urge you stop supporting this toxic human in your community that is fairly new and still growing. He will only damage it in the long-term. I'm not saying to ban him but giving this person your trust in hosting tournaments and what-not is just obscene.

I will get some NW players where possible to confirm what I have said is factual and not a lie. If it helps I can even get the other FSE moderators to confirm it I'm sure too.

I also got permission from Shadey to use this;

<screenshot retracted since forum rules do not allow the posting of personal correspondence without consent of both parties.> - NoVa (GM)

There are countless examples of this within the Warband Napoleonic Wars community but I only wanted to use those I had permission from.

Off the top of my head I can name at least 12 players that he has targeted just in the last few years. The first of them that I can think of being Rikkert who I'm sure would happily confirm everything I said above, as would just about anyone from the NW community.

This one is from Chuckster. I know its in French but essentially Obelix is threatening Chuckster (again I have permission);

<screenshots retracted since forum rules do not allow the posting of personal correspondence without consent of both parties.> - NoVa (GM)

I hope you're not becoming a elsse-bis collaborating with the EU
No it isn't true
I adviced you some changes and i would give my opinion about it
Either you don't know how to read either you didn't receive the message
Whatsoever, either you do the changes and we'll stay friends either you act like elsse and you will regret it trust me
Otherwise you delete it (the list) and you make another one with another bbcode
I'm not playing NW anymore so believe me that I can attack whoever I want, nothing can stop me believe me
So now you chose but do it quickly and you are lucky I only comeback to my house this thursday
What I did to Rikkert I can do way worse and trust me, I really don't give a **** of being banned from NW's tournament
You have till 11pm to make a choice (15min) and believe me I'm already kind
If you haven't done anything till there trust me you'll regret it my friend
Chuckster : Ok dude lmao I don't give a **** about your list you're just a psychopath
Obelix : 9 minute remaining
Yes, a dangerous psycopath in real life and when somene hit me I counterattack on internet and (french quote so it's hard to say it english but i'd say it result in send him directly to the cemetery, and what are you going to do about it
I'm not a clown of NW like Elsse or Kraz, I won't play the jester on teamspeak
You have 7 minutes left and after that you won't have another chance to comeback
2 minutes
Really unfortunate, your mail will receive logs of your ip on child pornography's website really soon and it will only be the beginning my friend
So your parents and your whole family aswell (receiving logs)
You don't even know what you just triggered, now I will block you and when you will be crying you won't even able to contact me in order to beg me to stop
Good luck

I know Obelix's excuse will be that this is retaliation for what other people said or did to him, but does that really justify everything he has done? In my opinion and I imagine anyone no. You don't fight fire with fire and quite simply he has taken the fire and tripled it. When someone said something insulting to him he brought real life or family into things that did not need it. There is no excuse for this in my eyes.

Another Example can be found here (again I have permission);

<screenshot retracted since forum rules do not allow the posting of personal correspondence without consent of both parties.> - NoVa (GM)

The 2nd email in that screenshot is the name and email address of a family member of Rikkerts.

I'd like to add after the Blackbeard incident earlier he threatened to dox me over Snapchat as well before I blocked him. I forgot I even had him on there. Fortunately I don't care if he does.
Last edited: Feb 17, 2021

What did I just read.. Man this community is getting more insane everyday xD

I mean this is only the tip of the iceberg but I only felt I should post what I have permission to do so.

I can confirm this. He also has sent me messaged with a picture of me from 2014. I honestly don't know how this person is allowed in any community that is related to Taleworlds, FSE or Mount & Blade.

I can also confirm...

Herishey said:
I mean this is only the tip of the iceberg but I only felt I should post what I have permission to do so.
Click to expand...

You did well to do it, it should all show up sooner or later

Fyi he posted that personal information of mine in response to me saying the following on fse:
"you have -1000 IQ" 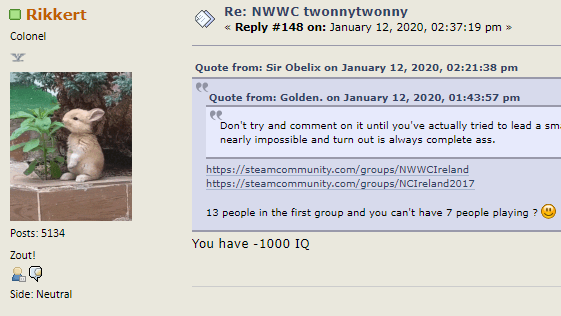 Can confirm this also. Obelix retaliation eta 15 minutes, look for flying pizzas at your front door.

For me , he started going over line when he was delaying rounds for several skirmish matches on puropuse , just like that little polish kid does.

I would def go for perma ban for this guy.


Also this what you posted and what he did he disgusting and real life harrasment is beyond any line. Perma ban is needed here.

If anyone has any similar encounters with Obelix I ask that you do come forward and help prove my case please, thank you.

I can confirm this to be true, should be permanently removed from the community, watch how he will now respond with more doxxing and hate.

can confirm that this guy is as toxic as u can be. shouldnt be involved in any kind of hosting

Alas, I do not believe that people from the ex-community still pollute the environment with such actions. I am afraid we will always face such problems in the future, the most important thing is that people like @Herishey do their part in such matters and I hope everyone will do their part.

In the meantime, let's close the subject because ensuring that such unnecessary people are taken into account and keeping the agenda busy with such things makes them important.

Let's pour gasoline and burn this issue as it remains.

After having my share of fairly bad interactions with Obelix for a while on NW, I had the occasion to sit with him on TS and ended-up talking with him through several weeks where he appeared to me like a completely balanced person. After a while, however, he resumed his threats against other players for some very silly stuff and I decided to cut all ties with him again, explaining to him why although he could act as a completely sane person on several occasions, the actions he decided to use on the daily against people who 'wronged' him were simply unacceptable.

All of that to tell you that although he can act like a normal person if he wants to, he will not hesitate to use any threats at his disposal whenever it suits him. I have seen a lot of cretins and sick people in this game, in NW especially, and I must say Obelix probably is among the highest-rated of those who heavily contribute to damaging the community he wants to be a part of. Between him and Rempica on native, I probably never had such a bad experience with someone who simply got nothing positive to bring to this community other than his so-called 'skill'. He did it in NW, and it won't take long before he does it on Bannerlord too.

I will likely not be involved in Bannelord competitive scene for a while, if not never. I could have just decided to happily let you handle him and let you witness 'his art' from your own eyes. But if you want to put a basic standard of human decency and ethics in your tournaments, Obelix should be permanently banned from all competitions onward. He will lie to you, he will threaten you if you don't side with him and he will act against you and your tournaments or players if he doesn't get what he wants. That's pretty much a given and simply ignoring this post would certainly be easier to do than taking a stand against it. But if you start a multiplayer scene by accepting virtual terror as a normal way of behaving, that's basically equal to shooting yourself with a bullet in the foot.

It's your time to act now.

Can confirm this dude is a pure psychopath, never seen a guy go this far ever over the internet. This man shouldn’t event be allowed to exist in any community ever.

Thank you for your maturity [APE] Superhobo
2 3

Tired of getting banned reacting to teamkillers
2