Queuing NA all the evening, 5H40 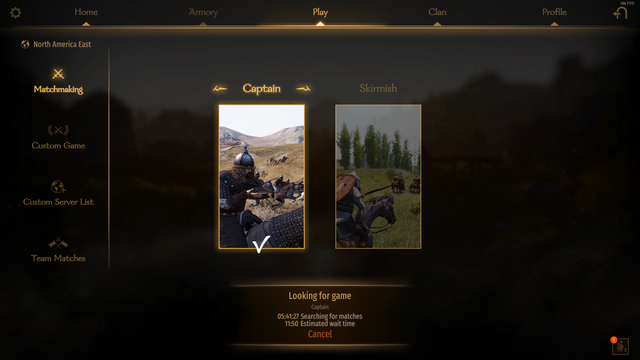 MArdA TaleWorlds said:
Is this issue still on going? Everything seems to be fine and working on our end.
Click to expand...

It is the design of the new queue system that is the problem.

Im going to be honest why are people complaining about the queues being broken. The most likely answer is that no one is queuing.

TheCrusader5 said:
Im going to be honest why are people complaining about the queues being broken. The most likely answer is that no one is queuing.
Click to expand...

Sir we have over 100 players that coordinate to get matches together and queue for hours at the same time, for nobody to get a game.

Thanks for your great feedback. We are still working on and investigating the issues regarding matchmaking. Sorry for any inocnvenience.

MArdA TaleWorlds said:
Is this issue still on going? Everything seems to be fine and working on our end.
Click to expand...

Still happening, have only found 4 games in new patch.

The player base is small, any barriers to matchmaking will ruin multiplayer. I have often had trouble at odd times in NA East to find games. More game modes dilute the player base for each mode. Adding ranked restrictions also hurts matchmaking until there are enough players.

Love the game, especially Captain mode! Hope this gets sorted

Thanks for your response MArdA.

After you asked for more information yesterday, we got some people together and queued for a game on North America East. We had confirmation of at least 6 people in our group queueing separately and no game would start. When we did this, two of the players had already been queued for over 5 hours, here are those screenshots from CommanderAnder and Squirrel of Chaos.

Below are more screenshots from different people in the group when we queued on North America East Captain. You can see that the 'Estimated wait time' is stuck at 11:50 for everyone and we had at least 6 people which should start a game. Not a single game started. 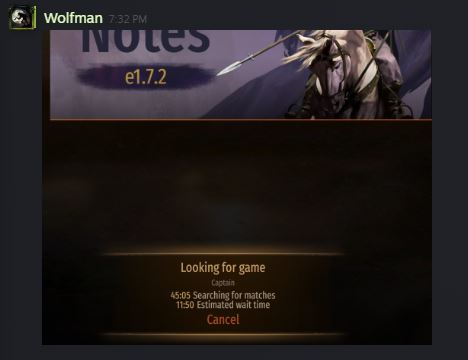 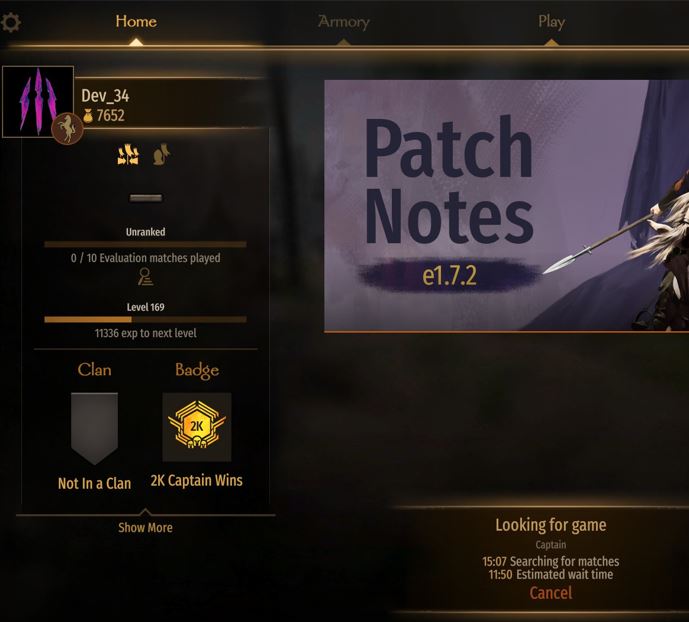 After no luck getting a game on North America East, we decided to try queuing for North America West Captain. We were able to get a confirmed 8 people in our group queued at the same time with no parties. Some of us had completed the 10 evaluation matches for ranked, and some of us had not. The only reason some of us haven't completed our evaluation matches is because of this issue and because we refuse to play on EU with high ping. Again, we were not able to get a single game. We did notice that the 'Estimated wait time' was changing on NAW.

Someone earlier in this thread implied that no one is queueing. That isn't true. Hundreds of people normally play North America East Captain and it has been going strong for years. We had to ask people who don't normally use the forum to report the issue here because weeks have gone by and the matchmaking situation has not improved. We definitely proved again yesterday that something is very wrong with the matchmaking, at least as it compares to how it worked before 1.7.2.

Hopefully you guys have some data on the number of games completed on North America East before and after the 1.7.2 update. This would show that the changes in 1.7.2 caused the number of games completed by the community to drop by over 95%. Correct me if I'm wrong, but this would be my guess based on every Captain player that I know saying that they haven't been able to play the last few weeks since the day the 1.7.2 update came out.

Kind gentlemen and women. I work 12 hour stressful days. I know you devs do as well. The one thing we have in common is our need to get off work and do what we love with those we love. As i dont feel like hanging out with my wife and kids... i do feel like kicking it with the boys. Please please please fix NA servers. This is wack, respectfully.

King of the Opps

Any updates on this? We are approaching a month of the captain and skirmish match maker being completely broken in NA.

I would like to bump this again. The majority of my play time last week was spent in NA East queues with hopes of playing a Captain match making game, which never came to fruition.

We don't have any updates as of now.

Havent been able to que for a match for the past few weeks. Solo or party, even in peak hours

any update on a possible solution?

Thanks Loop for your much needed thoughts. I refuse to play captains mode because the ranking system favors new players and I can't cue with friends anymore. I have over 3500 hours on both MP/SP and over 3800 wins. My clanmate has over 4000 wins and he only plays MP. We can't join up in any server both EU and NA. And if I lose, I lose a ton a points and if I win I only get a couple of points. The ranking system would have made sense 2 years ago but it's completely broken at the current state. I have a full time job and this game is the only entertainment I have time for. Please fix the cueing, ranking and bring back parties!

Please go back to old matchmaking so we can get into a game. After many long waits in que, I've managed to get into 1 captain match since the new update, which someone left and the game ended on warmup. I don't bother trying anymore.

It's been over a month since the 1.7.2 update and the same matchmaking issues persist. Is there any chance this issue can be addressed by offering custom Captain servers hosted in North America East & West? With custom servers we could bypass the matchmaking issues.

Its crazy that most of multiplayer has been unplayable for over a month and the devs are just letting it die.
Last edited: Jun 28, 2022

Can we get some acknowledgement on this issue. The NA players have been hung out to dry. Is this game dead or is there a plan forward?

Fcharles said:
Can we get some acknowledgement on this issue. The NA players have been hung out to dry. Is this game dead or is there a plan forward?
Click to expand...

Bump for an answer please.

Still experiencing issues.
You must log in or register to reply here.