If you have any question or you want to suggest something, feel free to do it here!​

atleast give us maps and facs for week one if its supposed to start this weekend. dont care about groups just yet

HKP said:
atleast give us maps and facs for week one if its supposed to start this weekend. dont care about groups just yet
Click to expand...

This was published in the announcement thread: https://docs.google.com/spreadsheets/d/1kreGxkSeuc7MY7l_dFKFHWrUG_x-byigqofm13YCS34/edit?usp=sharing

Check the pages at the bottom of the google sheet, what you looking for is the 'Groups' one. You will find all the information there but just in case, here are the details for your matches:

So it does start this week?

Harman said:
So it does start this week?
Click to expand...

Pretty sure it does. Taken from the ruleset:

(1) All official Nations Cup matches must take place in the time frame given by the tournament administration.
Group stage - From Monday the 30th of September to Sunday the 3rd of November. One match per week.
Click to expand...

The actual forums threads should be posted anytime soon but in the meantime, you can just refer to the google doc.

guess i missed that with all the spamming there, sorry

I don't know if anybody else feels like it, but I find German servers very laggy and hard to swing a sword or shoot an arrow on. Maybe a restart to those servers may work.

perhabs add yona and lp to the ban list 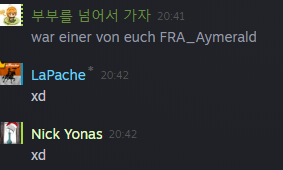 Is there any evidence you have against Blade or is it "just a bad guy in general"?

how will my game have the sassy swag it needs then

I would like to discuss the whole situation regarding my ban. It all started with an unofficial warning from Watly after a scrim with BeNe. During that game both sides were insulting each other, yet only I have been warned for it. Here is my conversation with Watly from that day:

Since that I have only played 3 matches: official with Germany on Monday, and scrims with Bene and Turkey on Tuesday. I haven't insulted anyone during those games, despite provocations from the Bene side:

Suddenly, after 2 days I'm getting banned for "inappropriate behaviour". I have asked Watly what the real reason behind my ban was, and what evidence he has against me. As I said I have been unofficially warned before and haven't been misbehaving since that day.I tried to talk with Watly, asked about the server logs or screenshots proving that I haven't been behaving well but he failed to provide me with them. Here's a screenshot of our conversation:


I also talked to other admins, but I learnt that it was a personal decision made my Watly, and other admins have no say about my ban.

Now I do understand that you may not like me at all Watly, but in a situation when you are the main admin of the tournament you can't just ban me without any reason, what was the reason behind my initial warning if you wanted to ban me anyway? If you're banning me it would be great if you could at least present any evidence of me breaking the rules.

I'm writing this forum post because it's simply impossible to solve this problem with Watly on Steam, at this moment I feel like I have been banned for no reason, and haven't been shown any evidence.

I'm surprised you're even allowed to start in tournaments these days

Permbanning someone for a bit of all chatting in a language the other team doesn't even understand without a warning is too much anyway. Especially if you have Arni in your admin team who did the exact same thing for 3 years straight more or less.

If they got proof that blade was the aymerald guy the ban is fine but i doubt that such evidence exists.

You have been insulting in multiple matches not just one. But still a permanent ban is a bit exaggerated tbf but deserved nevertheless.

First thing's first, I don't agree with a permanent ban, but I do think punishment is necessary. Blade, you knew you had something coming when you decided to test the administration team's patience by constantly being provocative. Impersonating FRA_Aymerald knowing it was a soft topic as this 'person' ruined part of a match isn't mature in any circumstance. If you were to be compliant with administrators and zipped your mouth, you wouldn't be banned right now, so before you continue to appeal your ban, you should first consider apologising.

I'm not trying to make excuses here with my post, I'm not saying I haven't been insulting anyone before I got warned. What I mean with my post is that I have stopped to insult people once I got warned by Watly. Then suddenly, 2 days later I got banned despite fixing my behaviour and not breaking any rules.
I do agree however that impersonating Aymerald was in a very bad taste, and I wish to apologise for it. When people started to suspect that it could have been me who did the whole mess, I went out of my way to prove that it wasn't me, I did send enough screenshots which prove that at that time I was playing another game.