§ 1.2 ROSTER
[list type=decimal]
[*]Team rosters must consist of at-least 8 players.
[*]Should a player not be on a roster and play for a team, then the player will be treated as a member of said team and will be added to their roster.
[*]Any player who has not yet played in a MOLE'S TOLL CLASH OF THE CLANS SEASON 1 match may join a team at any time. However, once a player has played for one team they may not play for another team until the transfer week. The transfer week will take place in the second week of the group stage. After the transfer week ends, players will not be able to transfer teams, unless under special exemption from the administration team. The transfer must take place during this week or it will not be accepted.
[*]In order for a team to register, they must elect a player to be captain to handle all issues pertaining to the tournament for their team. Teams are also permitted to list a co-captain to help manage the team.
[*]When the single-elimination phase of the tournament begins, teams will not be able to make any substitutions to their roster.
[*]Team banners must abide by the TaleWorlds forum rules.
[/list]

§ 1.3 MATCHES
[list type=decimal]
[*]You will have until Tuesday, 11:59PM (EST) to finish your match for the week.
[*]By entering your team into the tournament, you understand the obligation of playing at least four weeks of matches as a team; joining the tournament and leaving during the ladder stage is harmful to the proceedings of the tournament.
[*]Only team members, referees, administrators and streamers are permitted to be on the server during a MOLE'S TOLL CLASH OF THE CLANS SEASON 1 match.
[*]Any discriminate or malicious language used during an official match will result in a punishment for the offending party or team.
[*]Both teams have to agree to play on a particular server. If teams cannot agree on a particular server, they must ask a referee or tournament administrator for a decision.
[/list]


§ 2.1 GENERAL
[list type=decimal]
[*]Khergit Khanate is not a usable faction.
[*]Each match will consist of two maps, each map consisting of two first-to-three sets. Rounds will count both towards the match win and towards the round differential, which acts as a tiebreaker in the standings.
[*]The lower seeded team will start their match as the top spawn of the map of their respective choosing. They will then swap spawns for the second set of their map. The higher seeded team will start the map of their choosing after the first map as top spawn, and then swap sides on the next set.
[*]Each team is required to play exactly 7 players; should a team be unable to do so, the other team can play the match out or request a default.
[*]If a team forfeits mid-match, all remaining rounds shall be scored for the opposing team.
[*]Upon the change of the map, the first round will not be live.
[*]Teams are granted 5 minutes of preparation between each set, and 10 minutes between each map. After this period ends, either team may request for a "live on re" meaning the match will be considered live upon reset even if one side is not ready to play.
[*]Substitutions are allowed between rounds, meaning you can substitute any player at any time during the match.
[/list]

§ 2.2 LADDER STAGE
[list type=decimal]
[*]The groupstage will be played over four weeks and 6 teams will make it to the playoffs. The playoffs will be single elimination with winners advancing to the next round until the finals.
[*]Seeding will be determined by the amount of points and rounds won. A win is 1 point, and a tie is 0.5 points. If a tie in points occurs, the round difference will be used, and then the Bucholz system.
[*]Map picks will be done same day, five minutes before the match start.
[*]The groupstage uses a modified Swiss system.
[*]Factions will be pre-determined each week by the administrative team.
[*]Each week, teams will be able to pick from all available maps in the map pool, minus any maps banned by themselves or their opponents. Upon both teams arriving to the server or earlier at an agreed time, teams will exchange picks and bans.
- The higher seeded team will make the first ban. The lower seeded team will then make a ban. This process will repeat until a total of four maps have been banned. At this point, the lower seeded  team will pick its first map, followed by the higher seeded team picking its map.
- The lower seeded team's map will be played first, followed by the higher seeded team's map. Teams will start as top spawn on the map of their respective choosing.
- The map selection process should occur within five minutes of the scheduled map time. Only captains or a selected representative may provide picks/bans. Should no captain or co-captain provide picks/bans, the other team will be given full control over unclaimed picks and bans.
[*]Week one match-ups will be selected randomly.
[/list]

§ 2.2 ELIMINATION STAGE
[list type=decimal]
[*]The final seeding from the ladder stage will determine the bracket for the elimination stage.
[*]The top six teams will advance into playoffs.
[*]The playoffs will consist of a quarter finals, semi finals, finals and 3rd place match using single elimination.
[*]Factions will be determined in picks and bans. Factions may not be repeated each map.
[*]Each match, teams will be able to pick from all available maps in the map pool, minus any maps banned by themselves or their opponents. Upon both teams arriving to the server or earlier at an agreed time, teams will exchange picks and bans.
- The higher seeded team will make the first ban. The lower seeded team will then make a ban. This process will repeat until a total of eight maps (each team bans 4) have been banned. At this point, the lower seeded  team will pick its first map and faction, followed by the higher seeded team picking its faction for the first map, then the second map and their preferred faction. The lower seeded team will then pick a faction for the second map. Factions may not repeat for both maps.
- The lower seeded team's map will be played first, followed by the higher seeded team's map. Teams will start as top spawn on the map of their respective choosing.
- The map selection process should occur within five minutes of the scheduled map time. Only captains or a selected representative may provide picks/bans. Should no captain or co-captain provide picks/bans, the other team will be given full control over unclaimed picks and bans.
[*]If the score is tied at the end of a match, a third map will be randomized from the unpicked or unbanned maps, as will factions.
[/list]


§ 4.1 VIOLATIONS
[list type=decimal]
[*]Altering files for an advantage. Cosmetic changes, such as round timers and crosshairs, do not count.
[*]Exploiting glitches on maps. Glitches are defined as areas in match which, if exploited, gives one team an advantage over the other that was not intended by the map maker.
[*]Joining of another teams voice communication to gather information.
[*]When requested by the match referee (at the beginning of the round) players should take a screenshot of their game view while holding their primary weapon. Players should ensure the screenshot contains the referee message, the scoreboard and buildings/other textures/players and post it on the forum within 30 minutes of the match ending. Failing to comply with any part of this rule will result in a 1 match ban for that player.
[*]Playing for a team which you are not on the roster of.
[*]Spawning in a eighth player for the purpose of dropping gear for his team.
[*]Impersonation of staff members.
[*]The admin team is not all-knowing and as such if an instance comes up that does not necessarily fit any of the points shown above, they still reserve the right to deem it cheating, and thus to take the appropriate actions.
[/list]

§ 4.3 PUNISHMENTS
[list type=decimal]
[*]Any violation that occurs during a live round of the tournament and is determined to have an effect on the outcome of that round will result in the immediate or retroactive loss of that round for the offending party.
[*]Penalties will follow a severity system, and for every repeat offense, the severity will increase. The levels of severity are the following:
[*]The severity of the violation is determined by the administration, and will be determined for every individual case, though precedent set by previous infractions will be taken into account.
[/list]
MAP POOL


The servers played will be listed here:

There are no server bookings at the moment. First come first serve. Thank you! Server donations are welcome!
STAFF

Thunderbeu Steam
REGISTRATION
Use this format to signup!
[/list]
Code:
Code:
If you would like to add a player to your team, please use this format:

Code:
Don't have a team to play for? No worries, sign up as a free agent:

Code:
Tournament started! Do your matches!

[size=16pt]NORTH AMERICAN​
SEVEN VERSUS SEVEN
MOLE'S TOLL SERIES
WILL YOU GIVE YOUR TOLL TO THE MOLE?​

TEAMS
Battle hardened warriors gathered from all across Calradia...

Achaner said:
Since I'm out of a team, here I go again!

Kohath said:
Signing up as a free agent. Being a European, I doubt there will be much interest. If someone is looking for a nightwalking Norwegian though, hit me up!

[size=16pt]NORTH AMERICAN​
SEVEN VERSUS SEVEN
MOLE'S TOLL SERIES
WILL YOU GIVE YOUR TOLL TO THE MOLE?​

ANNOUNCEMENTS:​
April 9: "Make your tournament less memey" - Arys
April 10: Added rule under TEAM RULES/MATCH ORGANISATION to clarify server locations for matches for different regions
April 18: Removed Ruins, River Village, and Field by the River because they're too large. Moved Mountain Fortress to open maps.
April 24: wow cool thread man!
April 25: Due to popular demand, the format of the tournament has been changed from 5-aside to 7v7 battles. This was done due to 5-aside tournaments being generally lacking and that many players would enjoy seeing old style 7v7 battles again. All captains have been informed of this change. If you have not been contacted, please talk to one of the staff listed on the staff list.

Because of this change:

The roster cap will be increased from minimum 6 maximum 10 to minimum 8 maximum 14.

The sign ups have been delayed until May 14th.

Mountain Fortress will be moved back to closed maps and the original open maps reinstated. Random Plains will be making a come back this tournament, however this will be open to debate.

NA vs NA matches will be played exclusively on Chicago unless agreed otherwise by both captains. 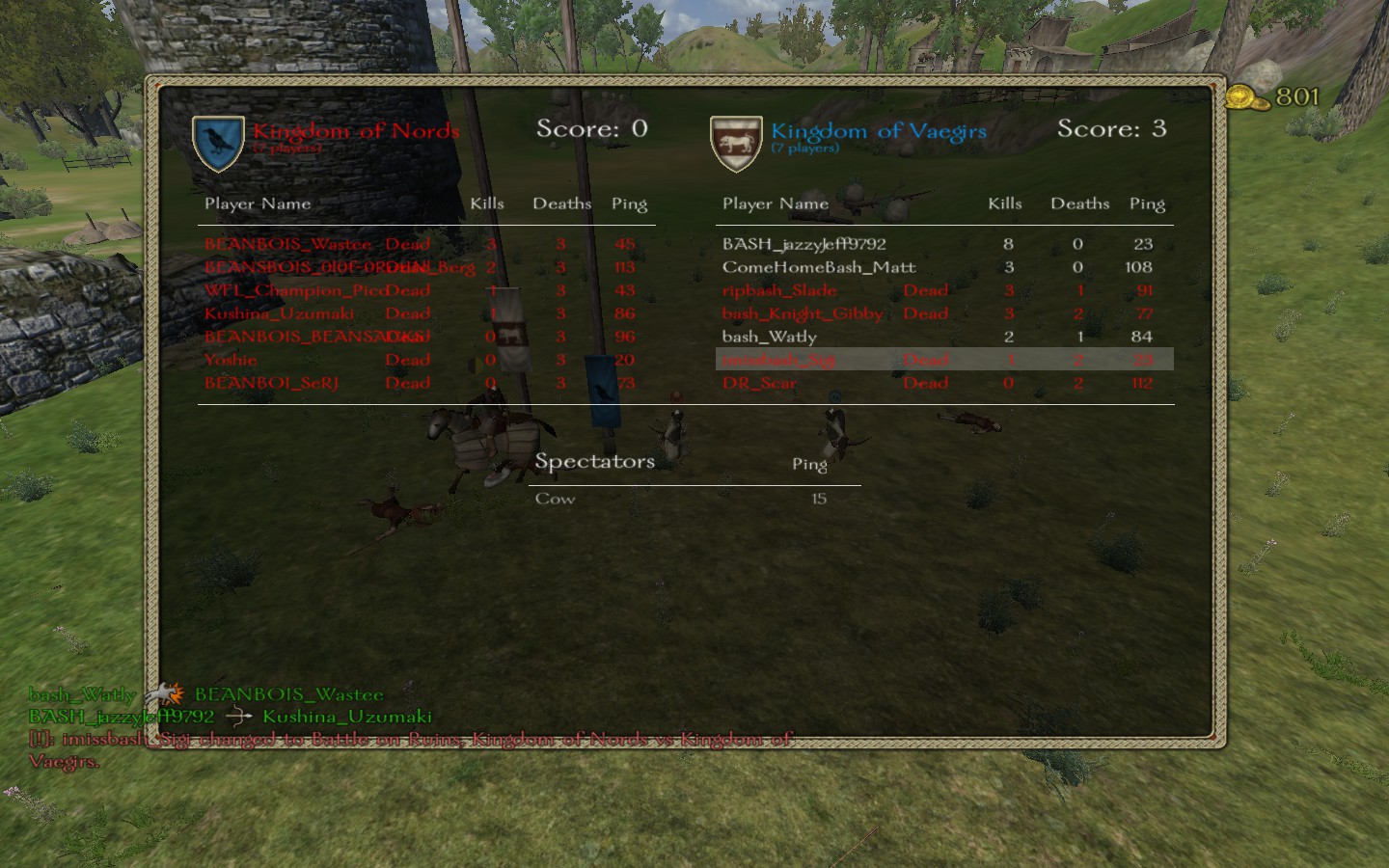 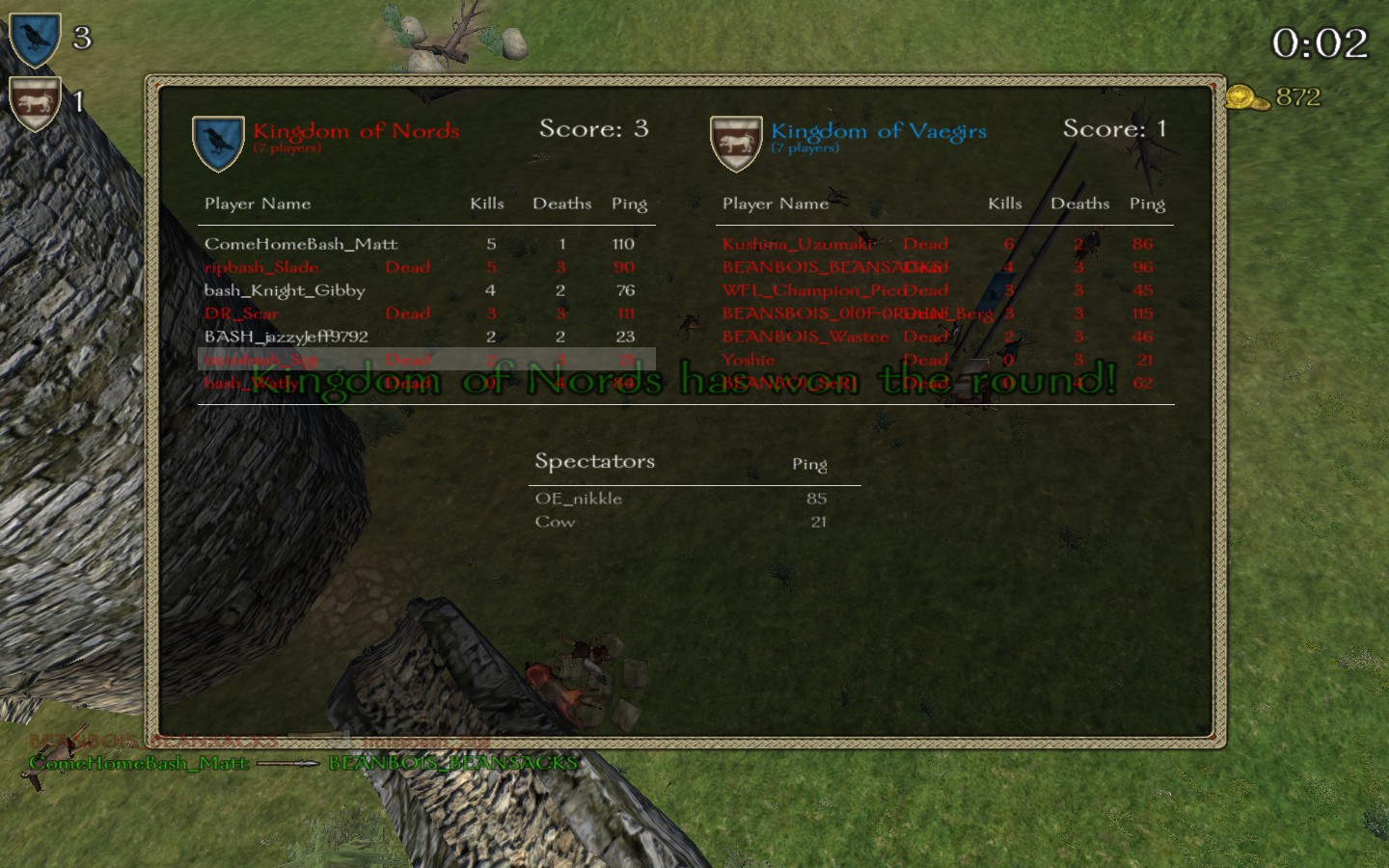 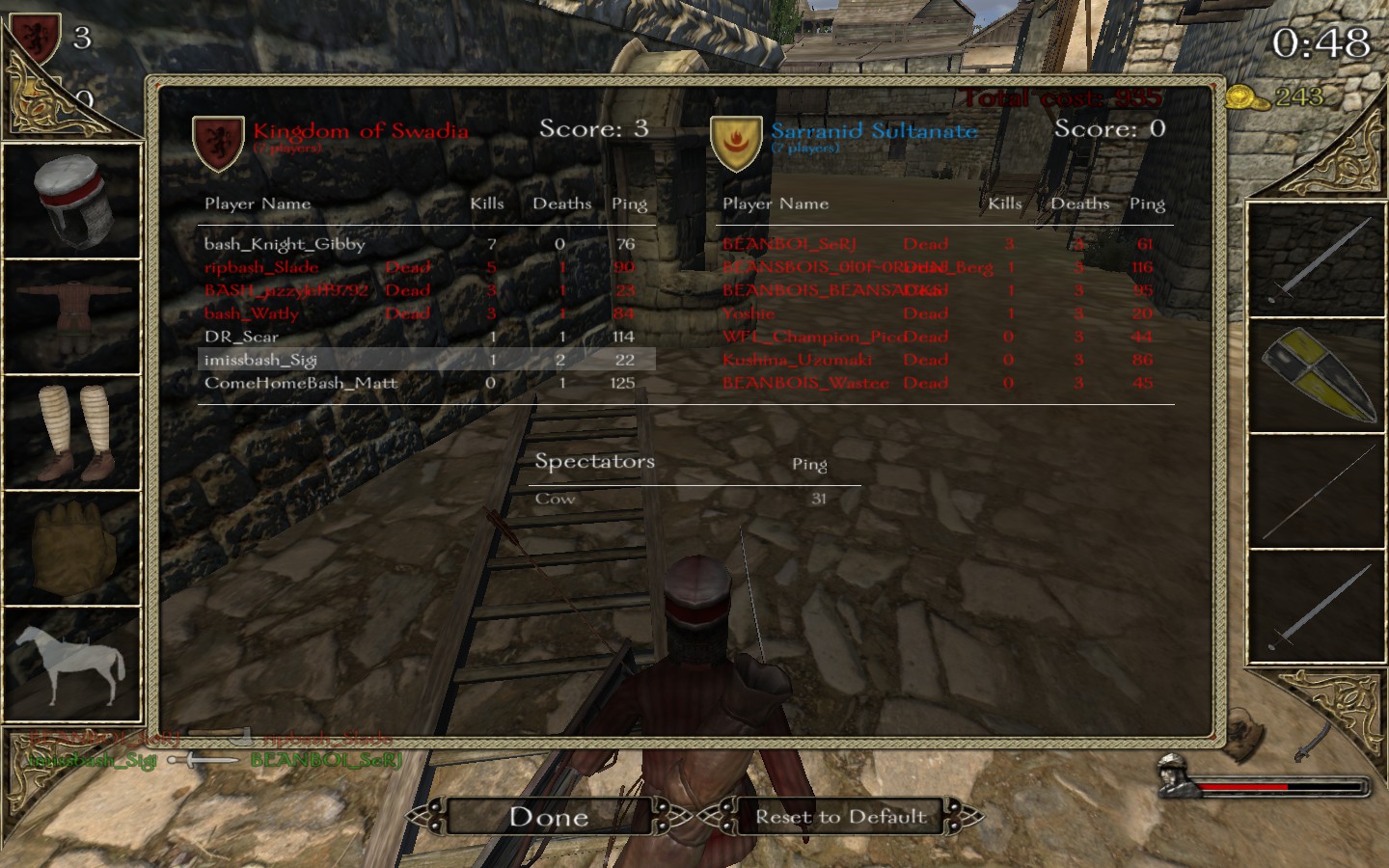 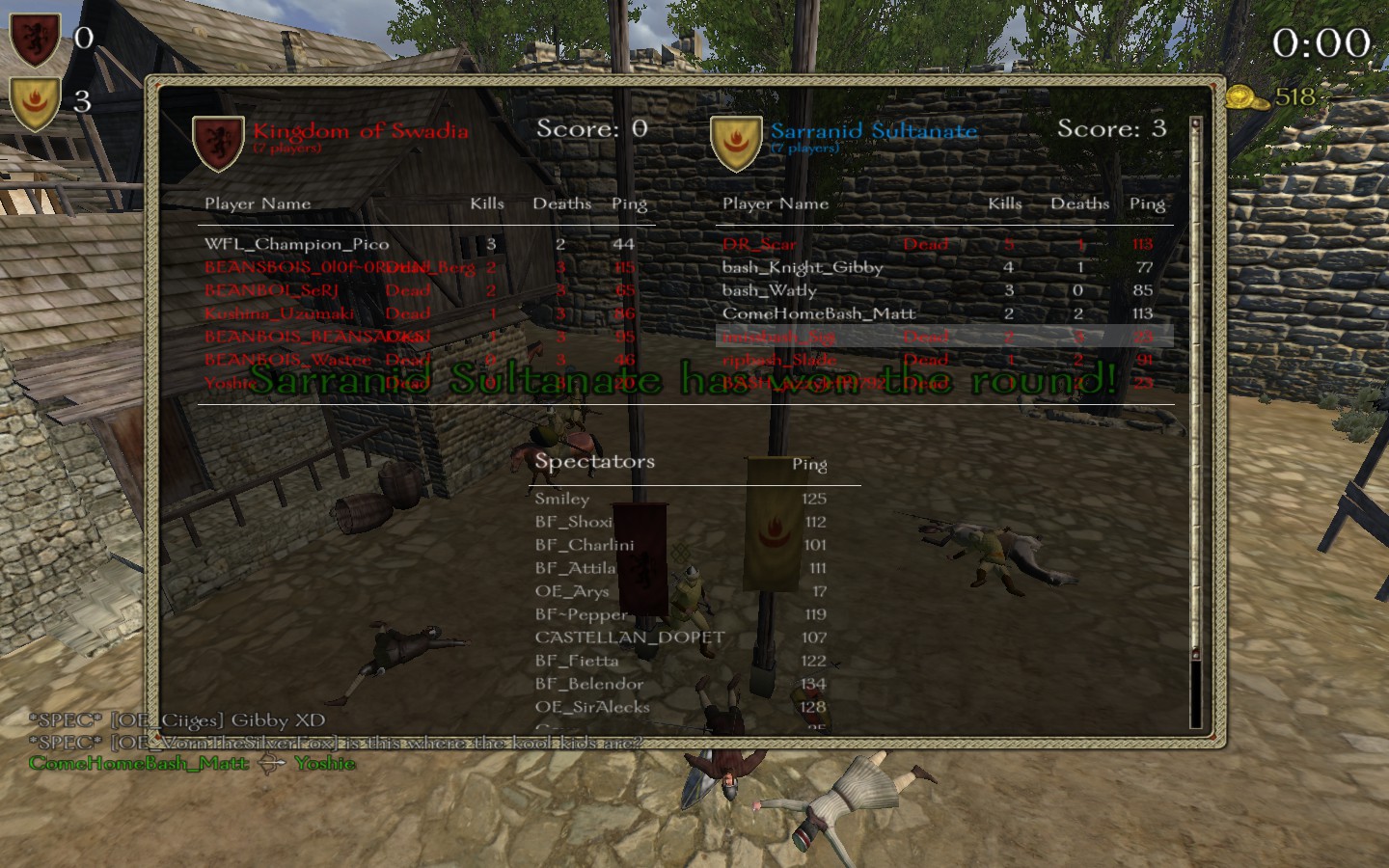 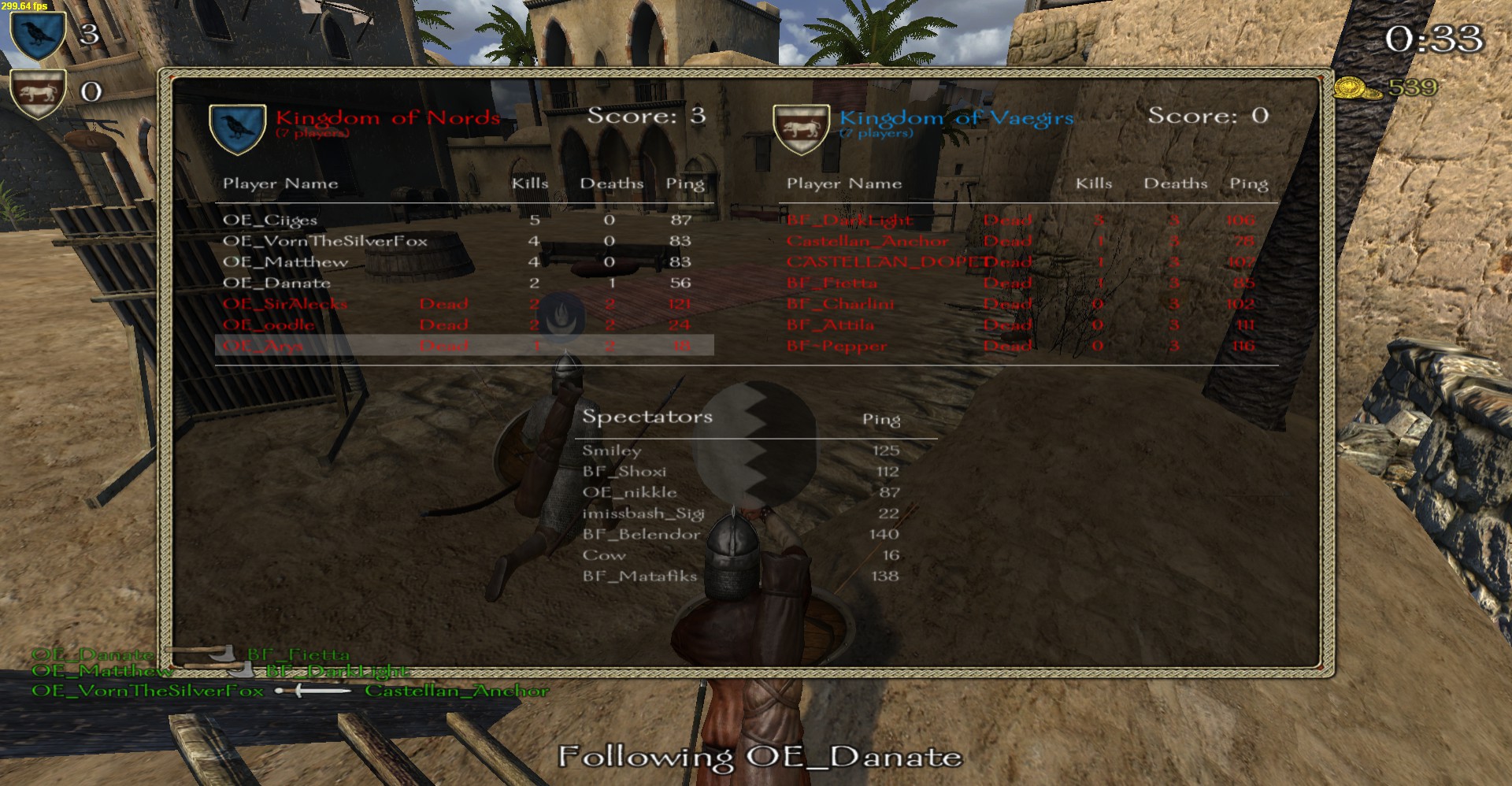 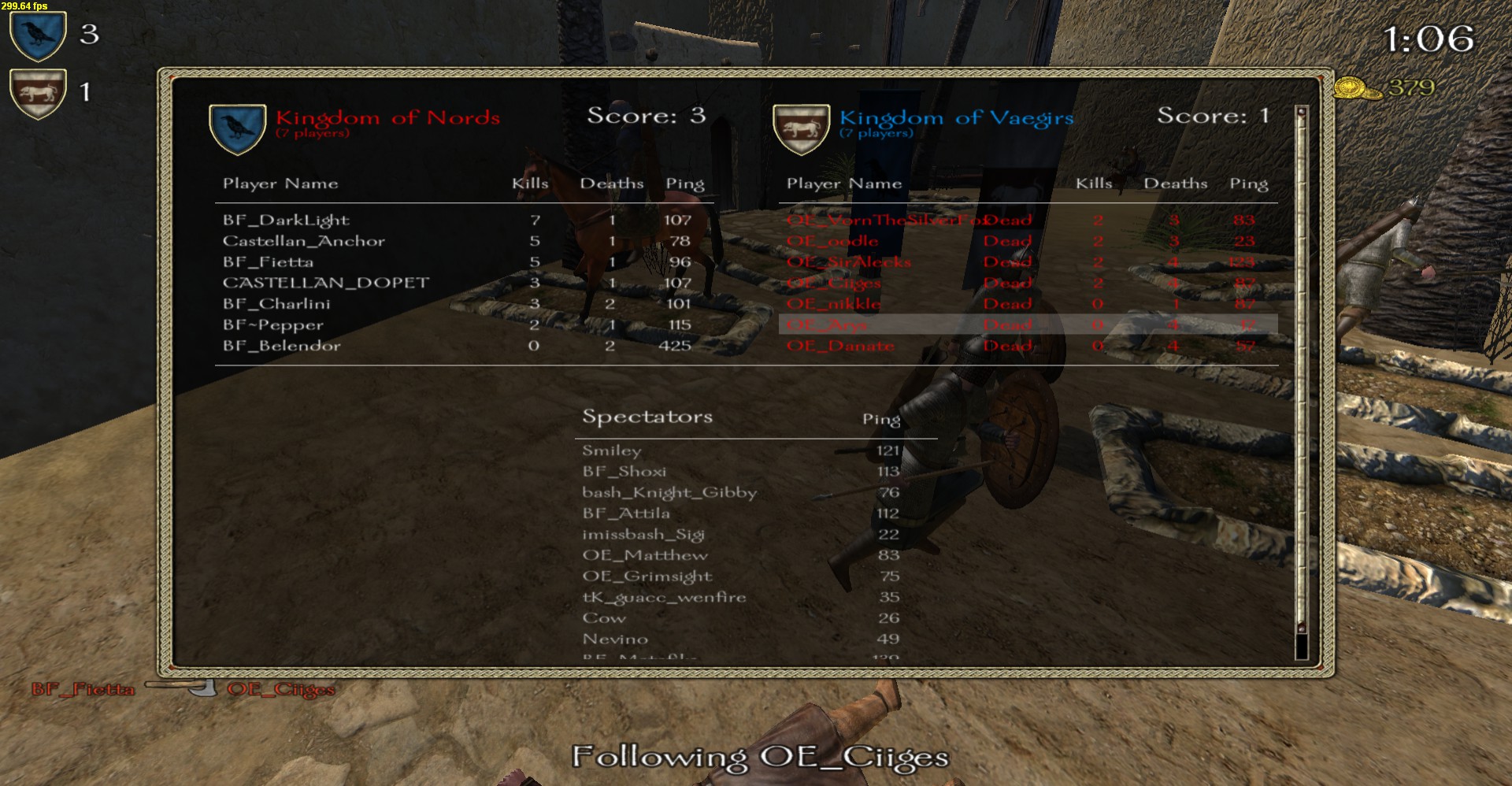 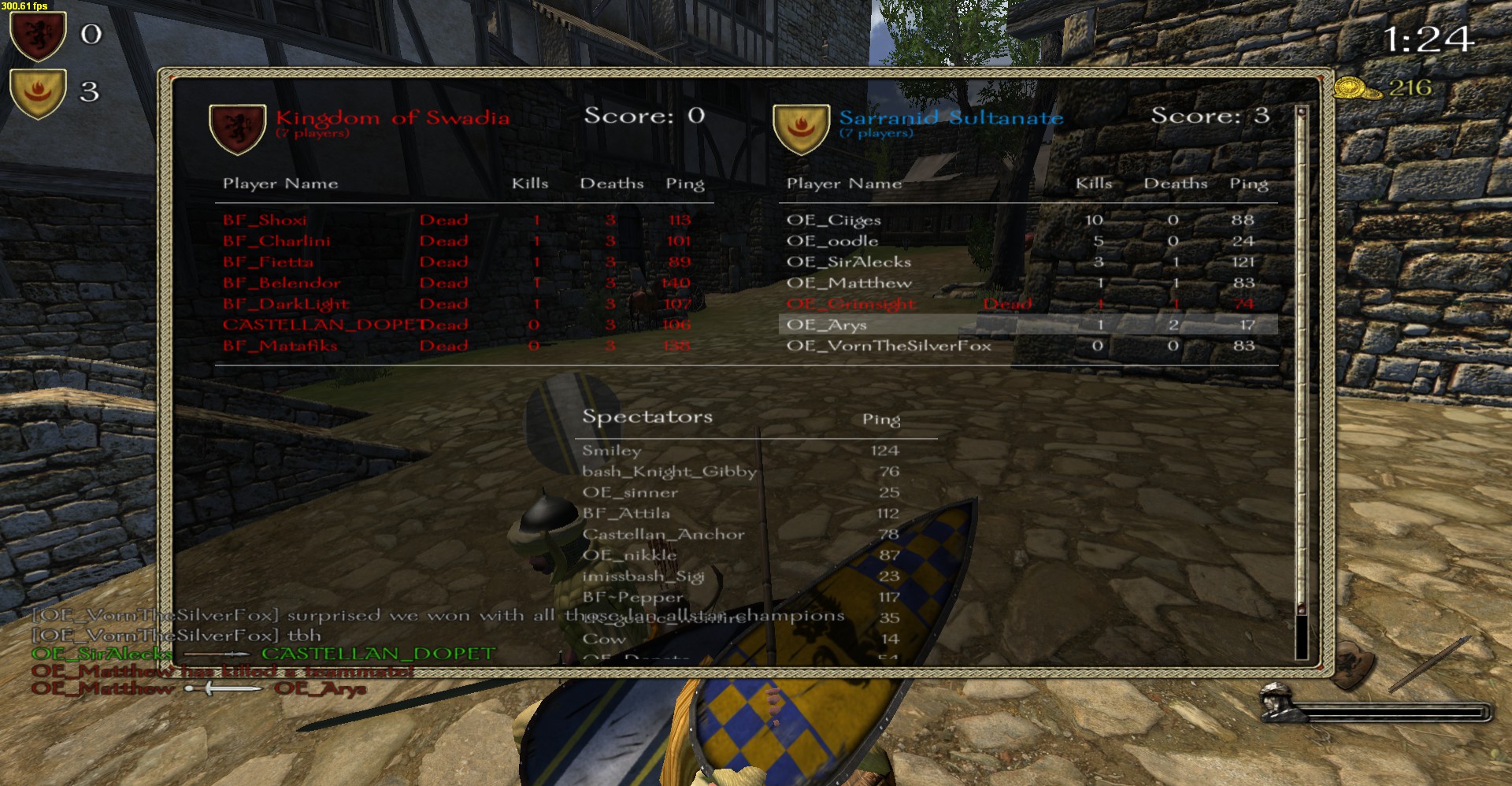 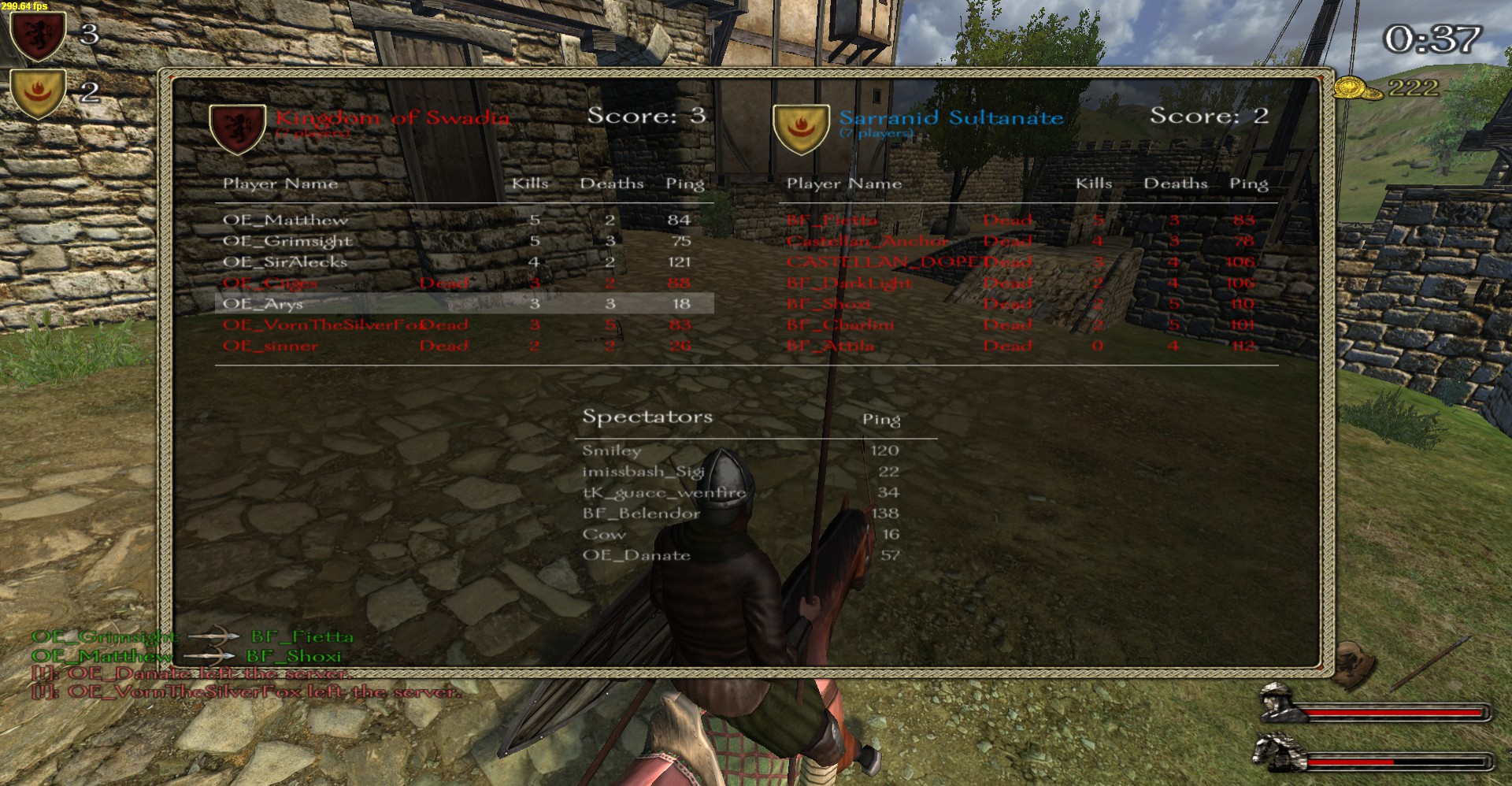 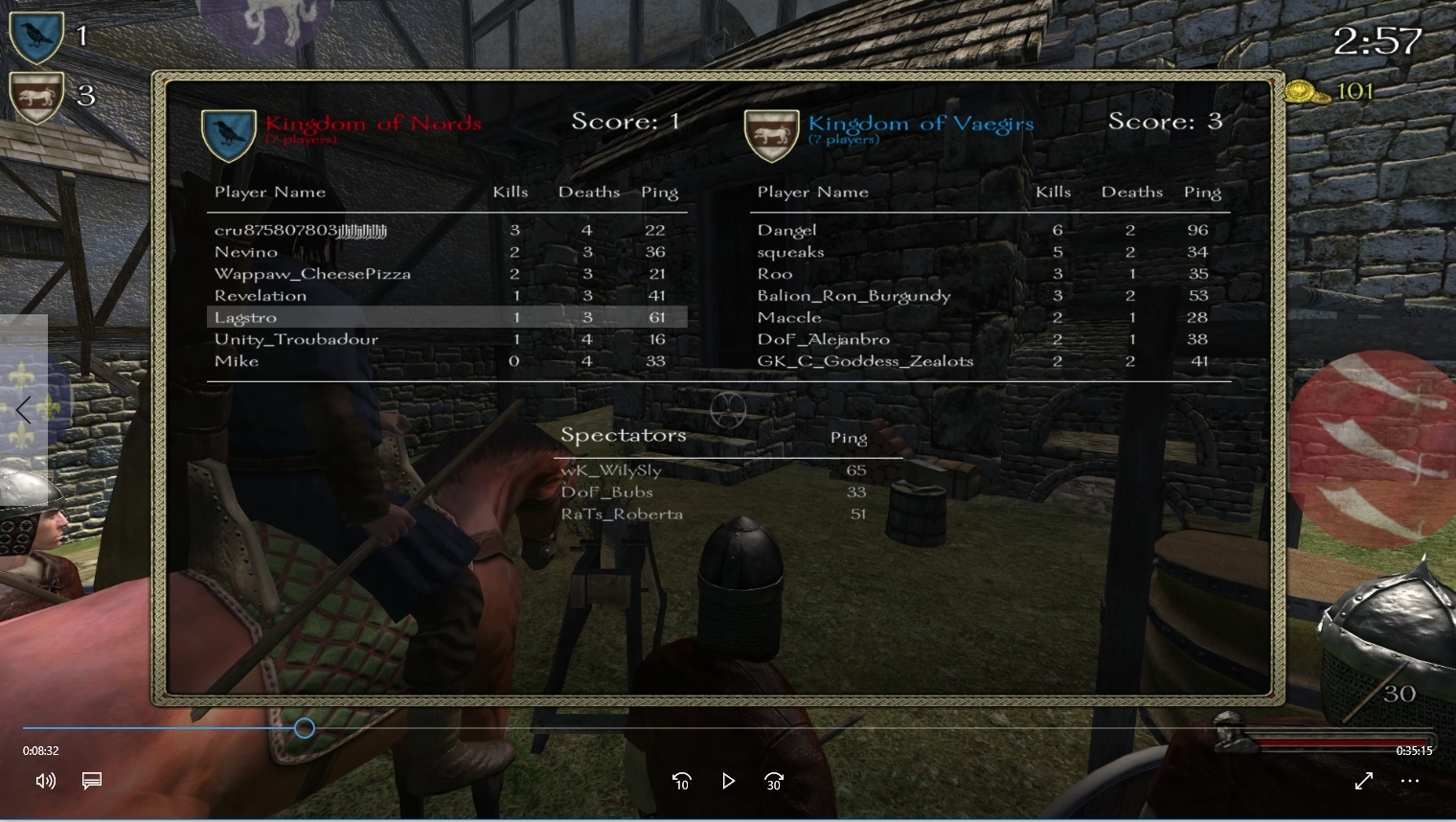 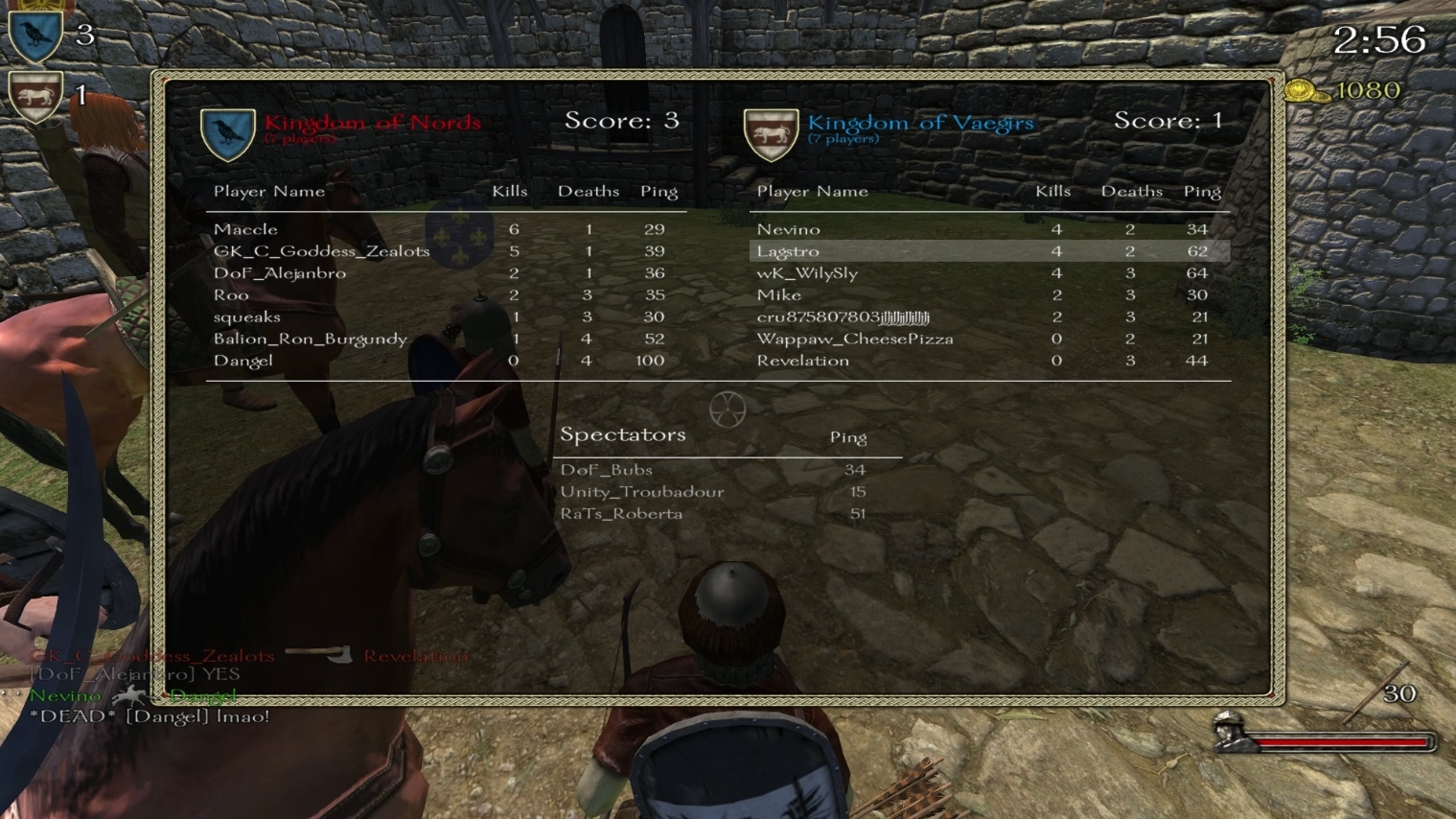 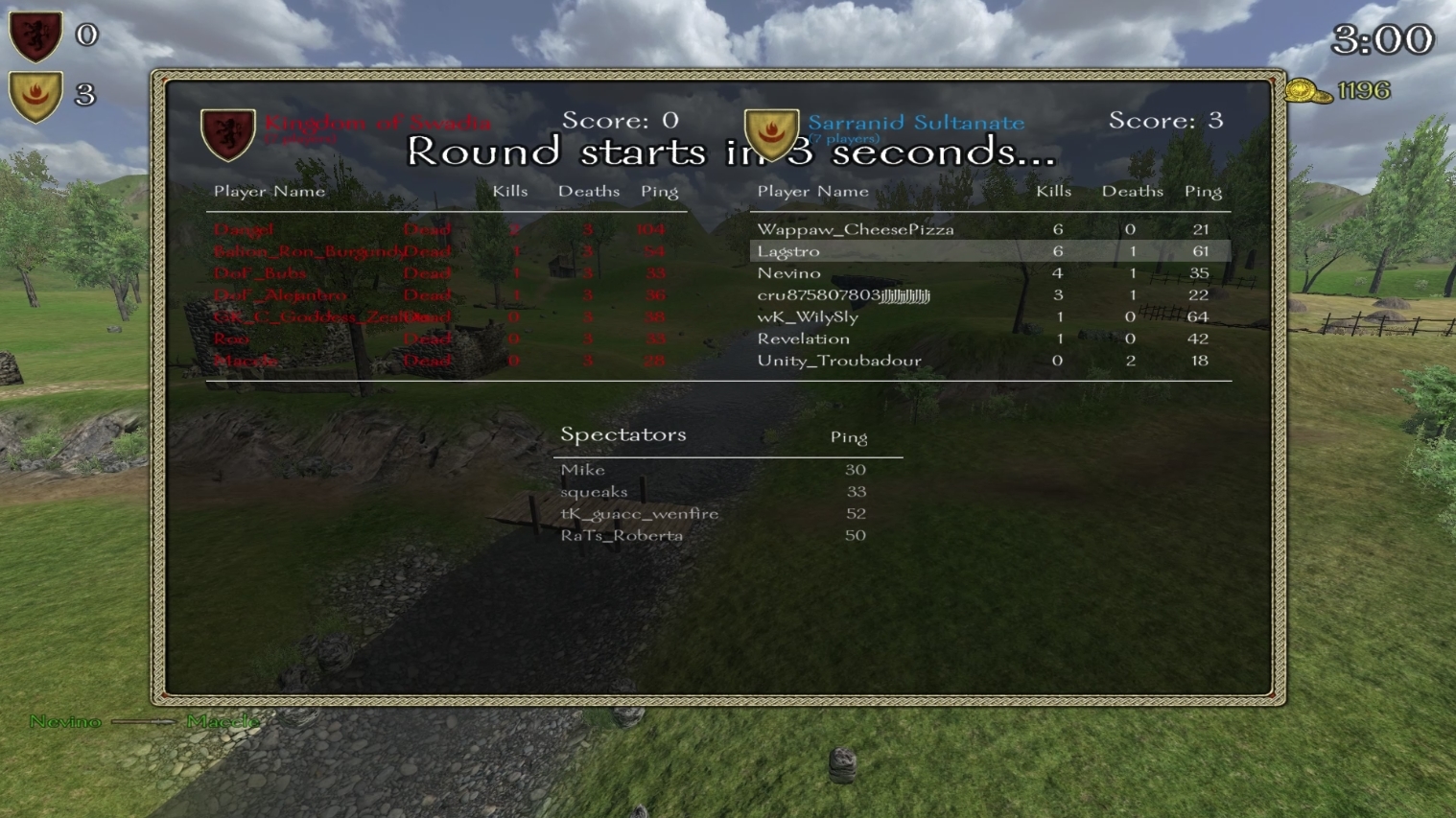 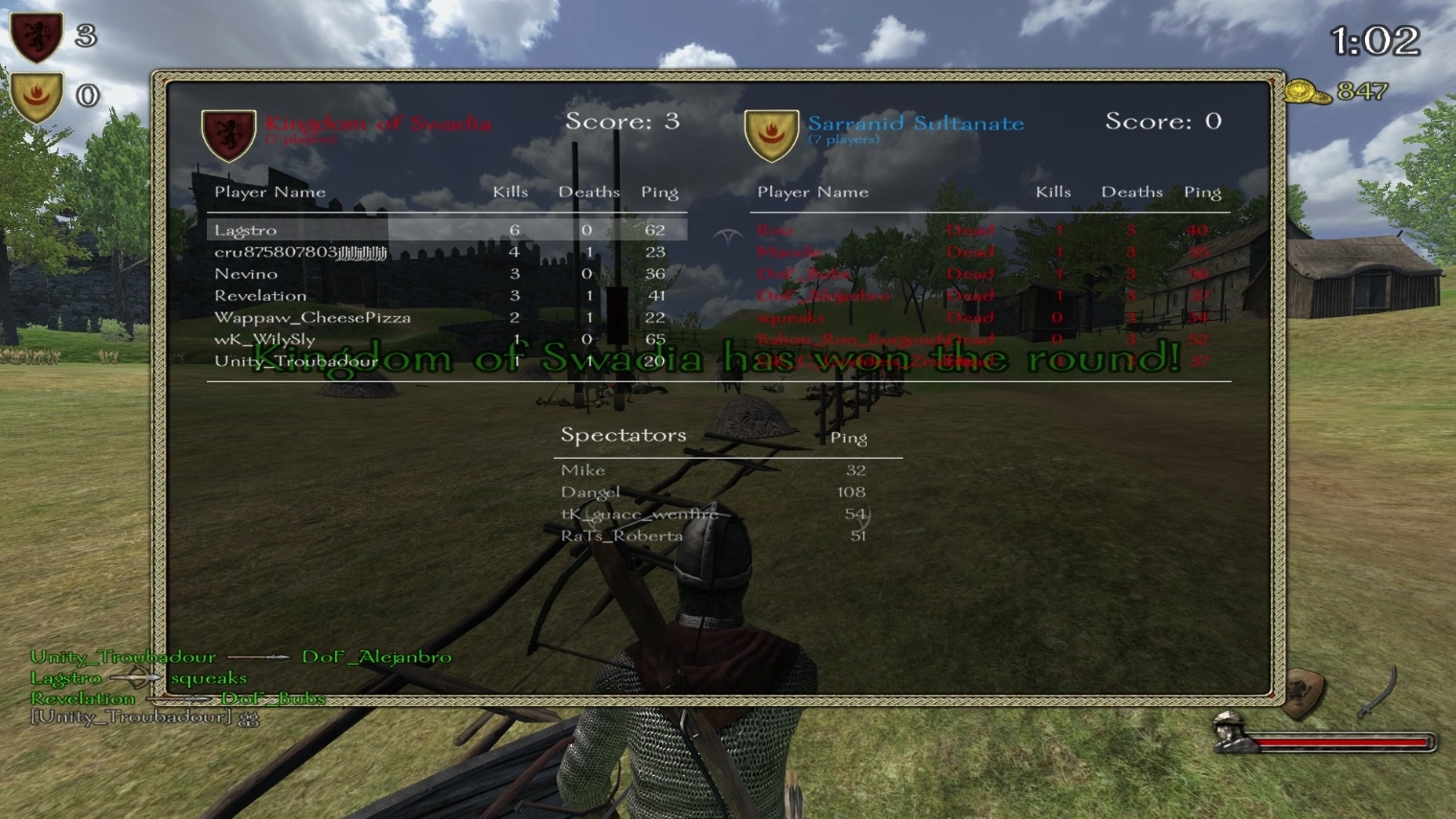 Remnants of the Clan Turtle Default Win over No Names

Maybe name this one something else?

if only i had 5 friends

So, EUs are not allowed in both of your tournies?

Efe Karacar said:
So, EUs are not allowed in both of your tournies?
Click to expand...

Where does it say EUs aren't allowed?

EUs are all invited to join except for you, smellendor

I must have missed it, alright. Title of the OP says "NA" as well.

Doesn't matter, it was a simple question. No need to make it biggie. Feel free to decline if that is how you want to play.