This sounds like something resembles multiplier effect of simple short-run model in macroeconomics, so it is supposed to be easy to accomodate this problem by manipulating numbers.
But I still believe the root of this prospersity/food-related issues lies elsewhere.
If by design the development team expects a normal Bannerlord playthrough run for at most 20-30 years(in-game), this approch is ok, but family/clan system looks redundant if this is the case. If the development team expects a normal Bannerlord playthrough can run for generations, then it's not good idea to put a soft cap that can be reached in one generation on prospersity of fief. (Though tbh current content of Bannerlord can't support such a long playthrough) Well, surely it's possible to make the soft cap only reachable after generations by doing nothing but numerical manipulation, but then this part of the game will be boring. Player cannot intereact much with this part of game, simply sit there and watch. I'm not major in game design during university, but my friend recommends a textbook for game design major called 'player make decisions', I really like this idea, player should be allow to make decision so they can intereact with the game world.
So my point is that player should be given more space to manage their fief, like food production.
Last edited: Mar 11, 2021

My idea of the problem is, you need garrison to maintain security and maintain loyalty. to maintain a garrison you need +food. + food increases prosperity, prosperity increase food consumption. When there is no way to limit prosperity growth, prosperity keep growing till it becomes - food, - food kills garrison and then it affect other aspect of the town. I think if we can either stop prosperity growth to a certain point or prosperity stop growing when food production is natural rather than decrease when no food within the city, town will be manageable and ownable

Bloodmastery said:
Sure here they are:

I got +12 in one of my towns and i`m not using any "cheats" out side game mechanics like Governor perks and town buildings, think this is the highest i manage to get it. 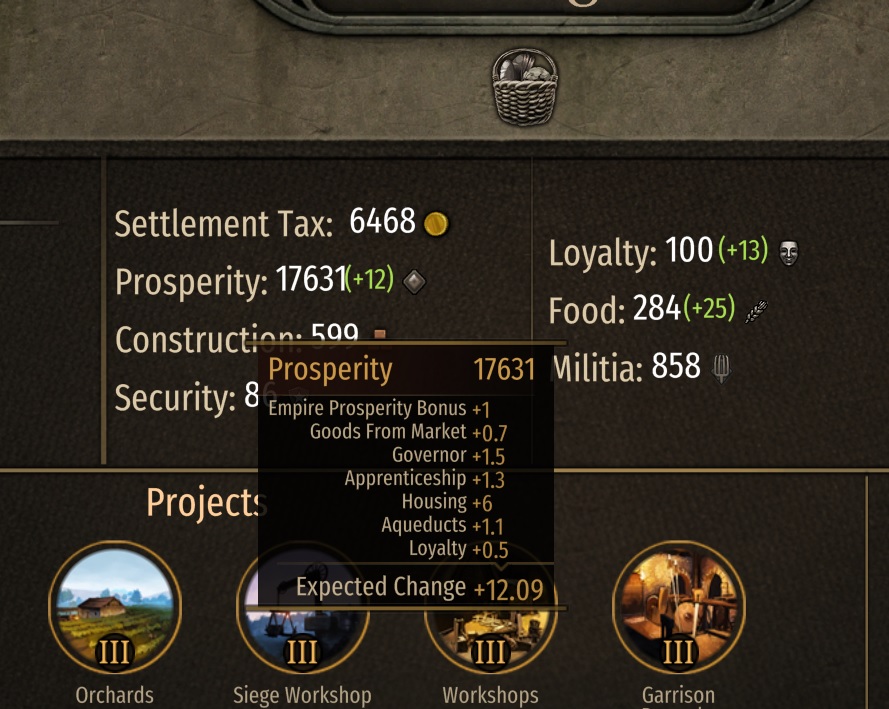 On a side note i have manage to get all the city from trading and never had my towns under attack so that might be the one reason they are overpopulated ?
Click to expand...

@Bloodmastery can you send this game's save file to [email protected], I was checking how these values go that high and having a town with 599 construction is also weird (even prosperity is 18K I need to check how construction go that high also I can check other variables). Thanks.
You must log in or register to reply here.

Today I let the AI f6 a siege out of spite and disgust for the lack of being able to jus.... well ANYTHING