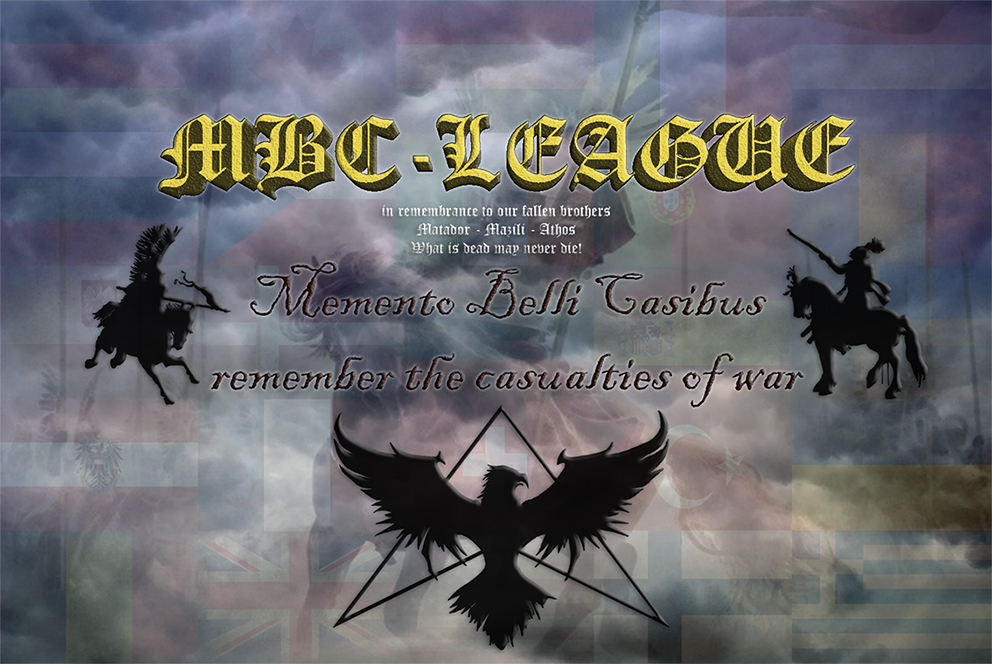 - Any active/inactive clan from any Mount&Blade game can apply for the MBCL. All matches will be played in With Fire and Sword but this does not mean we are excluding Warband and NW clans from applying.

- An applying clan needs to fill an application form, either on the TaleWorlds forum (https://forums.taleworlds.com/index.php/topic,366579.0.html), or on the league’s steampage (http://steamcommunity.com/groups/MBCleague).

- Multiclanning and playing as mercenary for league matches is forbidden! This means that if a player is in two clans at the same time, he has to leave one in order to join the league as member of the other. If any player is seen playing in 2 clans, either by their in-game name or their character ID, that player will instantly be banned from playing in the league.

- Each player can play his/her first match in the league without their ID written in the clans roster, but the ID have to be added there after this match

- If a player leaves the clan during a league and decides to join another, he/she is not allowed to play for a week after the day of leaving the previous clan.

- The applications will be closed on 07.July.2017! After that day, a schedule will be made for the clans, containing the clanwars-to-commence (link will be added later).

NOTE: Dates for application deadline and week 1 can change, depending on how much teams apply!

- Any form of insulting, cheating, hacking, glitching and other abusive behaviour is forbidden! Referees and league admins are obliged to first warn people that break this rule, but after one warning, they must kick the people if they keep breaking the rule. A kicked player can return to the server, but if he/she breaks this rule again, he will receive a ban from the MBCL after the match.

- The so-called "3-point-crosshair" is forbidden. Using this crosshair in a match will be handled like using hacks or cheats.

- Every With Fire and Sword faction (except Crimean Khanate) is a playable faction in the MBCL.

- Every "regular" With Fire and Sword map can be played


The score system of the league works as follows:

> A winner of a league match gets 3 points while the loser gets 0.

> In case of a tie or draw score, both teams get 1 point.

- Each clan plays against each other clan once, so the league will last exactly the amount of weeks as the amount of clans that sign up.

- Each match has 16 rounds, 8 rounds on the first map and 8 on the second. After playing 4 rounds on one spawn of the map, the map is reset and the clans have to play 4 rounds on the other spawn of the map (NO faction change). The clan that has a better score after these 16 rounds takes the victory and the 3 points. If the score is drawn, then both teams get 1 point.

- The round time is 4 minutes (240 seconds), which means that the flags spawn at about 2 minutes.

- There is a troop limit of 50% for every match. This normally means that the number of a troop class cannot extend 50% of the number of players in a team.

- The respawn time is 5 seconds.

- The spectator camera is locked on team members.

- After the clans got their map and faction, a new discussion thread has to be created on the Steam forum (http://steamcommunity.com/groups/MBCleague) (or preferable under the weekly match thread which will be posted every week on taleworlds), with the maps, factions and the match time (which clan leaders should discuss between each other). This same discussion should contain the match results, in a form of comment under the thread.

- Any person who is not in the clans that play the match can be called to be referee. Referees have to take screenshots of the match and post it under the match thread.

- Both clans can agree to play without a referee. If this happens both clans have to do screenshots for each spawn. The screenshots and the final score should be posted under the weekly match thread.

- Matches can be done on every day of the week, at every possible hour. It is advisable that clans check the match schedule (link will be added later), as well as the Steam forum’s discussion of matches, so that they can adjust the match time. The schedule will be made after the applications are closed.

- The minimum number of players that a clan has to bring to a match is 7. When a clan does not meet this requirement, the other clan can demand an autowin, or the match can be postponed. A clan can take 15 extra minutes to collect their members after the official time the match is going to start.

- At the beginning of a match, each team has to select 2 members that are allowed to talk using global chat/T-chat. If any unselected members use T-chat, they will receive a warning, and if they do it a second time, they can be kicked from the match by the referee.

- If a player is suspected to be cheating during a match, he can be asked by the opposite clan’s leader to make screenshots for verification. Each clan can demand screenshots from just 3 players of the opponent.  If you play the "non steam version" and you cant take a screenshot you are supposed to use your phone and upload the pictures you took from your screen.
The screenshots or the photos must be made and shown immediately after the question for it came and should be shown to the referee when the spawn ends.
If there is no referee the screenshots must be shown to the league council after the match.


NOTE: The league servers are running on "Gotha's Adimi Tool - for Wfas". (https://forums.taleworlds.com/index.php/topic,344878.0.html)


Players banned from this league for hacking and/or excessive insulting:
- Dares

With friendly regards: The League Hosts​