Even in the most recent beta patch. I did an experiment with scripts recently to amuse myself - took all the fiefs for my own clan, created a kingdom, hired many companions, and created new clans with them, one for each fief. All fiefs were fully upgraded before granting them, too, and all towns got a few million units worth of food, so prosperity, loyalty etc is through the roof. And relation with all clan leaders was at 100.

So basically there's one kingdom that is insanely rich, and a bunch of landless ones that constantly wage war on it, but, of course, get steamrolled all the time because they are outnumbered and have no money. They can't even loot a single village, because there's always a party nearby to defend one.

So, why the hell would the lords in the rich kingdom ever defect to the landless ones that the rich kingdom is already at war with? They literally have nothing to gain doing so - their fief is immediately surrounded by the enemy, their villages are raided almost instantly, and then the fief itself is predictably besieged and taken. Enticed with money? The other rulers don't have have any to speak of, while my clan has literally billions.

And yet, after a couple of in-game years after setting it all up and letting it run, this is the map: 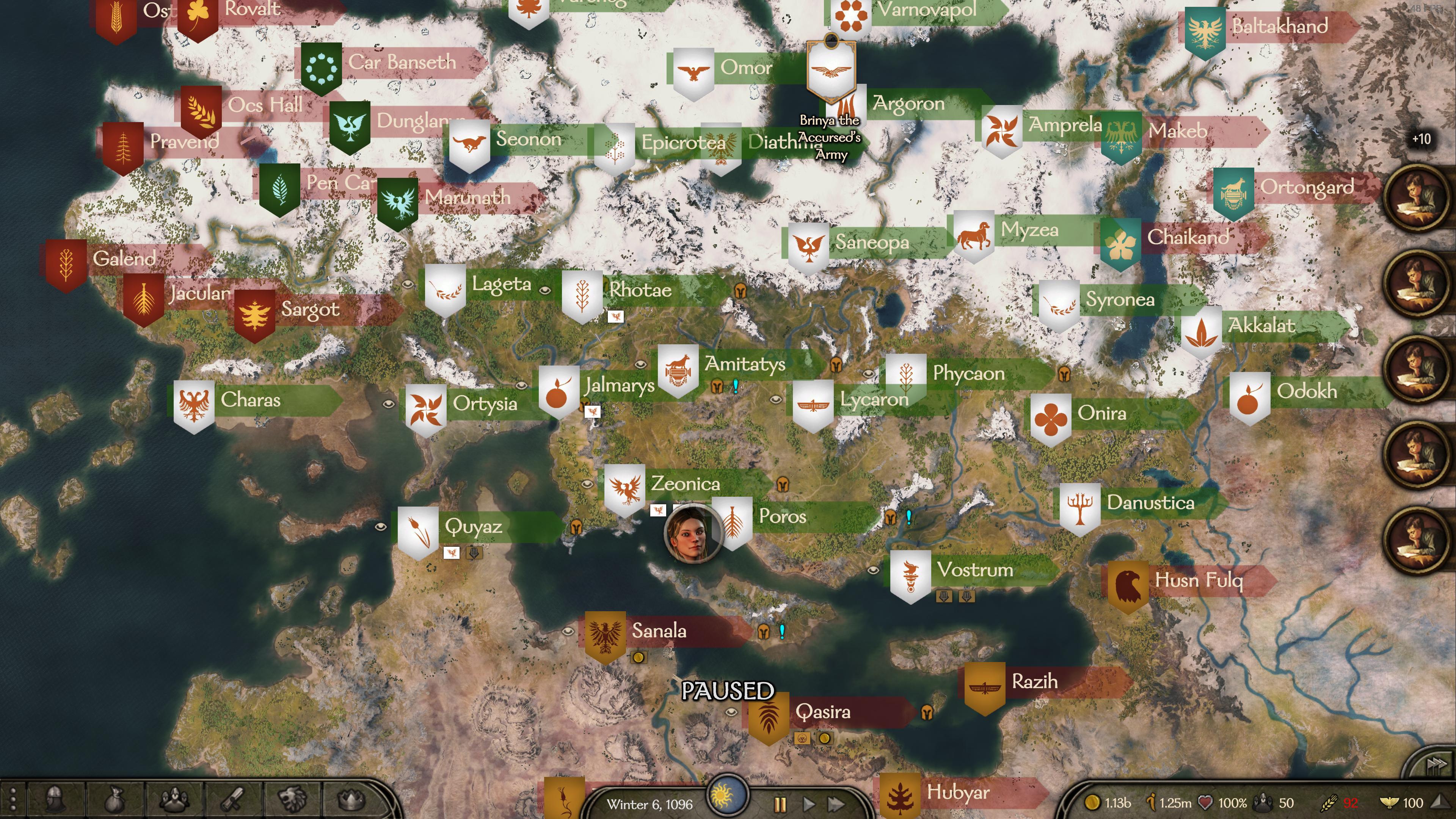 As you can see, most of the non-Imperial cities have defected to other kingdoms by now. The ones that did so last obviously had good reasons; but, again, the map was entirely white initially.

Mind you, if this happened over time - say, 2-3 generations - I'd even consider it realistic; regional separatist tendencies rearing after a long period of unification etc. But the lords who defect are still the same ones who were granted fiefs by me in the first place, not their grandkids. And they still have 100 relation with me. So is the defection basically just random then?

I haven't done this but I'd suspect they want to take more fiefs and can't because their aren't any so some codes make them have chance to flip to a faction that (in thier extra special logic) can siege a faction. It probably checks each day or something, so some will flip because and not any reasons as reason is understood by a human. I haven't had anyone flip in normal game play where there's endless wars (now typically 6/7 factions, counting broken factions) but I have no idea if this is coincidence. I even have fief-less clans for a extended amount of time and non have flipped on me. But yeah, the system is not good and the vassals have no intelligence or appearance of such.

IMO the problem starts with making the AI behavior all focused on prolonging the game loops. It should be made form the ground up with the goal being a rewarding and interesting player experience, then any other considerations for balance or pacing should be secondary. What we have was a bare bones system (which was fine for April 2020, to get things going) that instead of being transitioned or replaced with a more robust and content full one, has just been bandaged and bolstered to make it perpetual and bloat the perceived gameplay length

Given that the resulting pattern on the map is very clearly along cultural lines, I think that cultural preferences must have something to do with this. I might flip all the governors' culture to imperial and see what happens then. Although even so, the security concerns of switching should largely override that IMO (one thing that the map above doesn't clearly show is all the fiefs that have defected but then besieged and taken by my kingdom's lords - but there are quite a few).

I suspect that, fundamentally, the issue is that every day, the model calculates some score internally to determine the desire to secede, and then does a random draw. Which means that, even if the desire is very low, so long as it's non-zero, a daily check will pass eventually and defection will happen. It should only be possible if it crosses some critical threshold first. And furthermore, as with fiefs themselves rebelling, there should be a clear indication that said theshold is being approached, so that the ruler can actually do something about it.

Does seceding or defecting increase depending on relative power compared to other kingdoms as a rubberband mechanic to prevent Kingdoms dominating one another?

StaceMcGate said:
Does seceding or defecting increase depending on relative power compared to other kingdoms as a rubberband mechanic to prevent Kingdoms dominating one another?
Click to expand...

It doesn't seem like it. I didn't have anyone leave me even though I would have fief less clans for sometime. I don't know what will happen if I just let the game run now though. I suspect they maybe want war and if there isn't any maybe they want to defect.

Oh, there's plenty of war! Those fief-less kingdom will basically declare war on you as soon as possible, and will maintain it for a very long time (there seems to be a different bug at play here where, even though they get hammered hard, peace tribute calculation still favors them for some reason). So most of the time there's war, and enemy parties for my lords to fight, just no fiefs to target.

I looked at the code for this calculation, but it's rather convoluted. Seems to boil down to "value" of the given clan to either kingdom, but it also seems like there's basically a non-zero random chance to defect once you get past some (too small?) threshold.

Nov 28, 2022
VVL99
[PS5]Cannot make new parties, caravans are showing up as leaderless and governors are in the wrong towns.