Hi! im new to this forum and need to ask a question. i have a new longbow that i bought and am having difficulty with it. it is a 50# bow with a 28" draw but when i shoot it the arrow barely goes anywear! it doesnt go very fast and curves down all the time. and then the string smacks me in the wrist! idk what to do! any advice is greatly appreciated!!!

If you're confused as to why the string is smacking into your wrist, I don't think you should be using a longbow.

NO! i know perfectly well it is smacking me in the wrist thats not the problem! im wondering why its not shooting correctly! lol! i was just trying to add as much detail as possible! Haha!

Used to make recurve self bows when I was a kid.

You didn't give much information, someone could just say "You didn't pull the string back all the way" and it would go by your description.

Did you remember to rope it?

which longbow do u have?
do you have the curved part towards you and the flat part away?
is it the right string length? should it be shorter?
are the arrows to heavy?

Although shooting instinctively and immediately is sound advice, it would not cause the sort of issue here.

Based on the stunning lack of information, I formulate the following theories hypotheses:

1) Your string is elastic (wet maybe?)
2) The spine of your arrows is inappropriate, causing them leave the bow sideways.
3) You are notching the arrow in a misaligned place
4) Your bow is poorly made/ has too much mass, causing undue inertia
5) Your bow has too much internal friction
6) your bow has a recurve and is strung backwards
7) Your bow has taken a severe set
8[inserted to prevent cool smiley]) Your shooting technique is outside of the bounds of reason, and therefore, outside of my imagination
9) Your arrows are too heavy (unlikely)
10) Your string is too long

Devercia said:
Although shooting instinctively and immediately is sound advice, it would not cause the sort of issue here.

Based on the stunning lack of information, I formulate the following theories hypotheses:

1) Your string is elastic (wet maybe?)
2) The spine of your arrows is inappropriate, causing them leave the bow sideways.
3) You are notching the arrow in a misaligned place
4) Your bow is poorly made/ has too much mass, causing undue inertia
5) Your bow has too much internal friction
6) your bow has a recurve and is strung backwards
7) Your bow has taken a severe set
8[inserted to prevent cool smiley]) Your shooting technique is outside of the bounds of reason, and therefore, outside of my imagination
9) Your arrows are too heavy (unlikely)
10) Your string is too long
Click to expand...

could be pretty much anyone of them, you need to give us a bit of info.
my bit:
make sure you have the arrow nocked properly.
if you keep hitting your arm, your stood wrong. or dont wear baggy sleaves or both of them.
the arrow your using could be too heavy.

string hit is usaul thing for those using drawn bows, so unless your stood stupid its not that. though itll probly hurt, i dont get that because i have wierd bowed arms where my elbow never goes straight.
are you stood with your bow arm straight out of the side from your arm? so you can draw across your entire chest?
---o> like that rather than \o>

okay thanks for all the replies but i finally figured it out. i just didnt have the brace hieght right. makes me feel kinda stupid.. lol but i was curious and did a bunch of different tests and found im left eye dominant should i start trying to shoot left? or just keep shooting right? haha

oh and sorry it took so long to reply i dont get many chances to get on the computer... :/

I'm left eye dominant as well, but strongly right handed. It means that shooting barebow, I either need to shoot left handed, or close my right eye and have no depth perception. For warbow archery, which is largely about judging distances, it's better to shoot on your eye-dominant side if you have the musculature to support it. For victorian longbow archery, or Olympic barebow, I don't find that it makes a difference.

I have to say though that 50lbs is a pretty damn heavy draw-weight for you to be learning archery on. Hopefully there's a local archery club who can give you better advice than the internet though?

yea 50# is quite high for starting out, Ive done bare bow field archery for over 10yrs, give or take a few years out, and i only starting using 50+ bows when i was in my early 20s, before then i used 35# which is your standard draw weight for Field archery and target archery. for adults, using a 35# at 13 may explain my bowed arms and massive fore arms, seriously I'm not lying here but i digress.

i would seriously recommend you find a club somewhere near you to join, either for tips or if nothing else a safe place where you can shoot with harming yourself or others. and chats, Ive found guys who get to play with "toys" either archery airsoft or reenactment, are all mental and really friendly.

yeah when i first started out i only had my grandpas old 50 pound compound so thats what i started on so i figured if i can draw it why go for a lower draw weight haha but i can barely draw the compound with my left and its only made for right hand so now i have a problem lol and i dont know if there are any archery clubs aroun d here for me to join... :/

Drawing a compound is fairly different to drawing a longbow, or a warbow. With a compound, the draw is stacked at the beginning of the draw, and becomes easier as the draw goes on. With a self-bow, the draw is stacked towards the end, so it begins easier to pull, and at the end it's far harder, especially if you're not using your shoulder muscles correctly.
They also have different draw lengths - for insance, with a compound you draw up to your chim, and with a longbow you draw up to your lip. With a warbow you draw at least as far as your ear.

So a heavy compound bow is far easier to draw than a heavy longbow. I've never tried warbow archery, but I can pull a fourty-five pound compound bow without problem, but a thirty-five pound longbow is a ***** to hold at the draw for more than a few seconds.

You probably already know this, but there's also the matter of not locking in your elbow. If you grip the bow normally, then the bottom of the inside of your elbow will stick in, where the string wants to fly. It'll get hit, but because of totally different reasons to the string hitting the inside of your fore-arm near the wrist. Because of this, in target archery you need to at least relax and rotate out your elbow. If you're using a heavy bow then you also might damage your elbow, especially if you have it 'locked', but then again you might get Little Leaguer's Elbow anyway if you're practising a lot when you go through your teens. 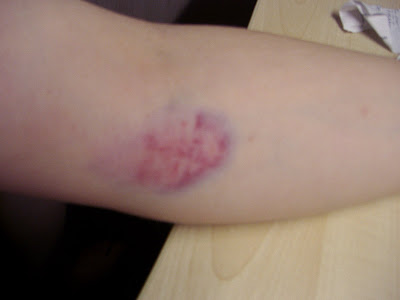 haha yeah i already knew that but still using the compound helped build the muscles to draw to longbow so it all worked out. but im gonna try to build up some muscles to see if i can shoot left and see how that works out. probably not very well haha but its woth a try at least i guess and i think i have a long way to go on either arm before i even thought of trying a warbow lol
You must log in or register to reply here.

Anyway to increase the limit on bow "nock to nock" length

What happened to "building a criminal empire"?
2 3