What changes this mod?
This mod increases of variations of game's features. Adds some variety of features.
Features:

Barracks:
1-If you are a king or lord of a city, you can recruit units and upgrade barracks in there.
2-There is 3 level to soldiers, as like barracks.
3-If we want to upgrade barracks, we can do this by affording cost and if  it's enough, by tactics and training level of our main party.
4-There is cost of units. For recruit them, need to afford some price.
5-Units and barracks has time to recruit/upgrade. As your level increases, time too.
6-The number of recruited units, decreasing by the unit level increases. Also archers and cavalries' number is lower than infantries.

Changes in faction troops:
1-Vaegirs are usually has axes.
2-Swadians are armored except militias, but their power strike is low.
3-Rhodoks are powerful, tough, and their archers are better.
4-There is no change about Sarranids.

Feature of recruiting companions:
1-Every each companion's, the money they demanded, increasing as you level up. Some of them are demanding too much money basicly, then levels above doesn't affects price, some of them are exactly opposite of them.


The speed of parties:
1-In each terrain, the parties' speed are changing. An example, in snowy lands, you move slower.

Military editsYour kingdom)
1-There is 3 branch to edit your military:

-Profession:
Profession can be selected according to your party's skill. If this level is low, the soldiers of your armies' gonna have less professional troops.

-Wages
As wages increases, your soldiers' morale increases too.

-Marching with high speed:
How much you choose to move fast, the kingdom armies will move faster. But their morale will decrease.

Gaining money by gaining victory:
-After battles, you will gain different amount money from lords, caravans and others.

The changing in center wealth:
1-Before, the centers was being rich as how much they make resources. Now, I increased this and lowered the base wealth.

Lords are recruiting better units as thier renown increases:
1-An example, a lord with 800 renown, can recruit better units with %20 extra chance.

The income of centers has been changed:
1-Wealth, is more effiecent in incomes.

Changes in trading system:
1-Now, the items' cost we buy, is according to center's production.(This feature was already in this game, but I rewrote the half of codes.)

Mercenaries which are wondering in map:
1-Around of cities, soldiers belong to city's faction, are spawning mercenaries.
2-When you talk to them, you can attack or hire them.
3-If you help them in a battle that your sides' advantage is low, they can join to you for a low price.

Ordering items:
1-When you are talking to a merchant, you can order items.
2-You must pay a bit higher price, but you can decrease with your trading skill.
3-Items you ordered, coming according to it's price.
4-There is feature of merchant to accept your item. If it's above a specified chance, he/she will accept to bring the item.
5-The chance decreases as item's price increases. Also the highness of your relation with him and the skill of merchant that chosen at start of game, increases the chance.
6-Given base chance as randomly to merchants at start for ordering item.

Now, the price of mercenaries in towns, is decreased.

The new feature about gaining renown:
1-Now, the renown of lord who defeated by you, increases your renown.

The new feature about diplomacy trading:
1-The income of your cities increases by cities belong to the faction that signatured trade pact with you.

Starting as lord to a kingdom:
-Currently, you can only join to Vaegirs. Initially, you have 225 renown, items related to Vaegir, 2 dried meats and 2 breads, and a village.

Events:
1-For now, there are two events.
2-If you are in bad relation with a faction, with a chance, a menu appears.
3-When you have your own stands up, with a random chance, a wealth comes upon your places.

Assigning companions as manager to cities, castles and villages:
1-Trading and recruiting in cities and villages, gains plus by your companion's intelligence and trading skills.

Features of new damage system:
1-The infantries whose are using polearms, delivers more damage to cavalries. The dealed damage increases according to attacker's polearm skill.
2-The ironflesh skill decreases the taken damage.
3-The infantries whose are using axes, delivering lower damage to cavalries. The skills lowers this reduction.

New management to kingdom troops:
1-When you have at least one companion and  your party's level of tactics and trainer skills' mathematical calculations hit to 85, a screen appears. Infantry, Archer and Cavalry. If you choose one of them, the units related to your chosen class, delivers more damage.

2-After this screen, you will choose one of the 4 options:
-Anti Cavalry Tactics
-Siege defenders
-Siege attacking masters
-Powerful Cavalries.

You can research these technologies if there is skilled someone and a city.

4-You can increase the power and toughness of infantry, archer and cavalries.

Cavalries are giving less damage when on foot.

-If increases the number of your battle's greatness, a menu opens and you will specialize in a branch.

-If your party's skill of  tactic reaches a specified level, a menu will open and then, your soldiers will be tougher and more powerful.

-When you are oath-bounded to a kingdom, the king gives you bodyguard for free. If you agree, you can get them.

-Now the kingdoms which are expands too much, includes pistolmen.

-If you research a new tech, your armies uses pistols.

-Added traits to your parties:
1-There is 6 kinds of traits.
2-Every traits has it's own progress and thresholds. If you have 5000 points, according to threshold about to 4000 points, you can level up that trait. But firstly, you must have trait points.
3-For example, as you damage someone, those are adds within, and returns you as "extra damage giving trait".

-New in-battle morale system:
1-Each unit has courage according to their unit level and faction.
2-Soldiers lose even more morale if they got hit in their back.
3-The soldiers whoes fight against cavalries got morale penalty if they are infantry, archer or a cavalry fell from his horse.
4-A soldier, if gets a hit from ranged weapon, his morale will decrease according to damage.

-Now Rhodoks has cavalries, despite it's amount is too low.

-Nordic and Vaegir soldiers gets %25 more damage from cavalries.

-Vaegirs are %25 tougher and more aggresive in siege attacks.

-Now, every city has mercenary limit, mercenary increase rate and mercenary amount:
1-When you go to cities, via menu, you can check that if you can hire mercenaries of not.
2-A city's increasing of mercenaries is direct proportional with growth rate of mercenaries.

-A hidden place is added to game. If you party's spotting skill is higher than a level, you can spot it.
1-If you accept, you get teleported to an island. A place becomes visible. You can return to Calradia, exit and re-enter, jump on scene or loot there if you want to.
2-If you choose to loot, gets items to his/her inventory, the companion who has best skill of inventory management, which are you chosen to loot.
3-If you jump on scene, a message appears as: "You can't leave until something happened."
4-When you enter, you can loot the dead enemy bodies by pressing 3 seconds on "k" key.

-Features to better battle experience:
1-If you hit to an armored soldier, a metal sound's plays.
2-If soldiers are about to attack and their target is in range of them, yells.

-Smarter spearmen:
1-A spearman, if an enemy horseman come to him and get closes according to his weapon length, hits to horse from bottom, if he hits, attacks to rider from up.

-New AI!
1-Troops can fake, can block related to his/her skills. As their skills changed from troop to troop, aggressivenes and blocking changes.
I will increase the features of this mod in 2. version. And will edit some dialogs.(An example, Rolf's dialogs, as you can see from images.)(An Example, the feasts, increasing barrack level to 5, etc)

Looks interesting, will definitely give this one a spin. Might be me, but the images are not appearing for me in the spoilers. Anyway, always like any of the 'native but better' mods, keep up the good work!

Some nice, interesting features. Looks great.
Please reupload the images. They're all 404.

@Adorno
Can you suggest me site for uploading images, except imgur?

Yes - TWim was designed by J specifically for this forum.

v2.0 is on the way. Currently, I'm testing the mod because of a bug or issue.

Interesting ideal .
I will try this mod but how do i set up this mod?

Are you going to publish MS of this mod? It looks very good for modders.

Sure. I've already planned to do that. But I will publish it when the mod is near to end.

Ok, dude. Will wait for this great stuff.

The following message appeared "Get_object_failed_for_mesh: order_frame" and I came by this visual bug, any idea how to fix it? 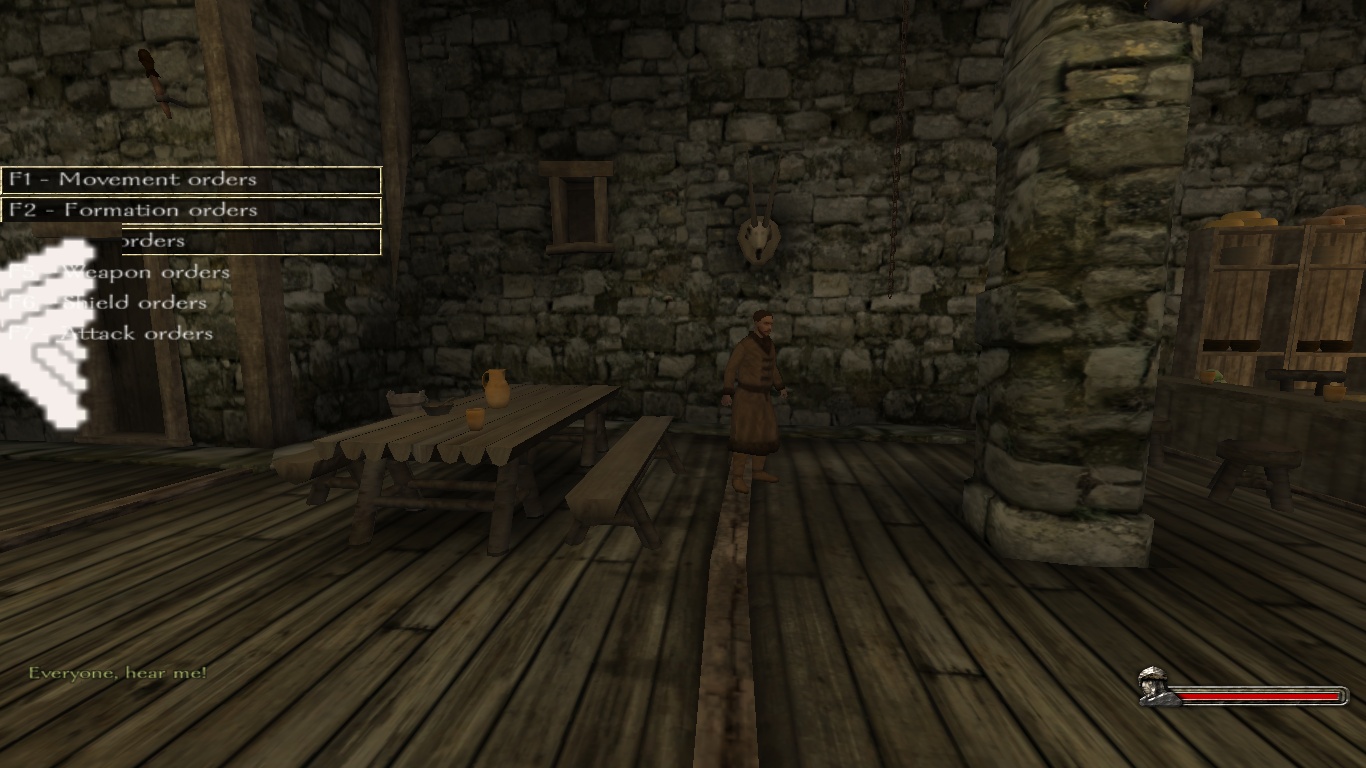 New version is out! New features:
Features of new damage system:
1-The infantries whose are using polearms, delivers more damage to cavalries. The dealed damage increases according to attacker's polearm skill.
2-The ironflesh skill decreases the taken damage.
3-The infantries whose are using axes, delivering lower damage to cavalries. The skills lowers this reduction.


cj3625 said:
The following message appeared "Get_object_failed_for_mesh: order_frame" and I came by this visual bug, any idea how to fix it?

I can't see the image. But there is no problem in my pc. May be you can download the last version.

Kortlcha said:
New version is out! New features:
Features of new damage system:
1-The infantries whose are using polearms, delivers more damage to cavalries. The dealed damage increases according to attacker's polearm skill.
2-The ironflesh skill decreases the taken damage.
3-The infantries whose are using axes, delivering lower damage to cavalries. The skills lowers this reduction.


cj3625 said:
The following message appeared "Get_object_failed_for_mesh: order_frame" and I came by this visual bug, any idea how to fix it?

I can't see the image. But there is no problem in my pc. May be you can download the last version.

I downloaded the new version but the message still appears and the bug too, tried uploading the img to another host

Edit:
I fixed it by copying the pbod_resources.brf from another mod and adding the load_mod_resource line on the module.ini, maybe you forgot to put some resources on the download or something

New version is incoming, the new features:
You can research these technologies if there is skilled someone and a city.

4-You can increase the power and toughness of infantry, archer and cavalries.
For now, there is no effect of technologies about rents, but it will be handled.

Still waiting for source
In which version we should wait MS? Damn I've not seen such a good Native Expansion since Tocans...

I think the time of sharing source is near. And my mod still needs to be known. Do you know what can I do to make known this mod?
You must log in or register to reply here.