So I am sure everyone is having the same issue with a faction taken over most of the map before your clan even gets to the second rank. I've ran a couple of test games and the map gets taken over by one or two factions way to easily and way too fast.

Main reasons for this I've found are

-1 Lord's defect with their whole towns way to easily
-2 No defending armies, maybe the AI needs to make armies for defense also?
-3 Garrisons are too weak currently.
-4 Sieges end too quickly, you can get into a siege in 3-10 days, id go back to the 30-60 day siege time.

I could honestly say the game is currently unplayable because of this unbalancing act before a player gets his stuff together he is facing a horde. Because the game ends by day 400 basically.

Batania was destroyed for first 2 hours of my gameplay.. they just was deleted by empire

Ayaka said:
Batania was destroyed for first 2 hours of my gameplay.. they just was deleted by empire
Click to expand...

in my game rn, the entirety of sturgia just defected to my faction within the first day of the war

North Empire destryoed Western Empire and Battania for 3-5 hours, destroyed Vlandia and Khergits for other 4 hours... Idk how to play late game if alwyas Empire or Khergits dominate all map

Why devs did not notice this problem on internal tests?
This problem is killing interest in the late game.
I really hope that in one of the next patches this will somehow be fixed. 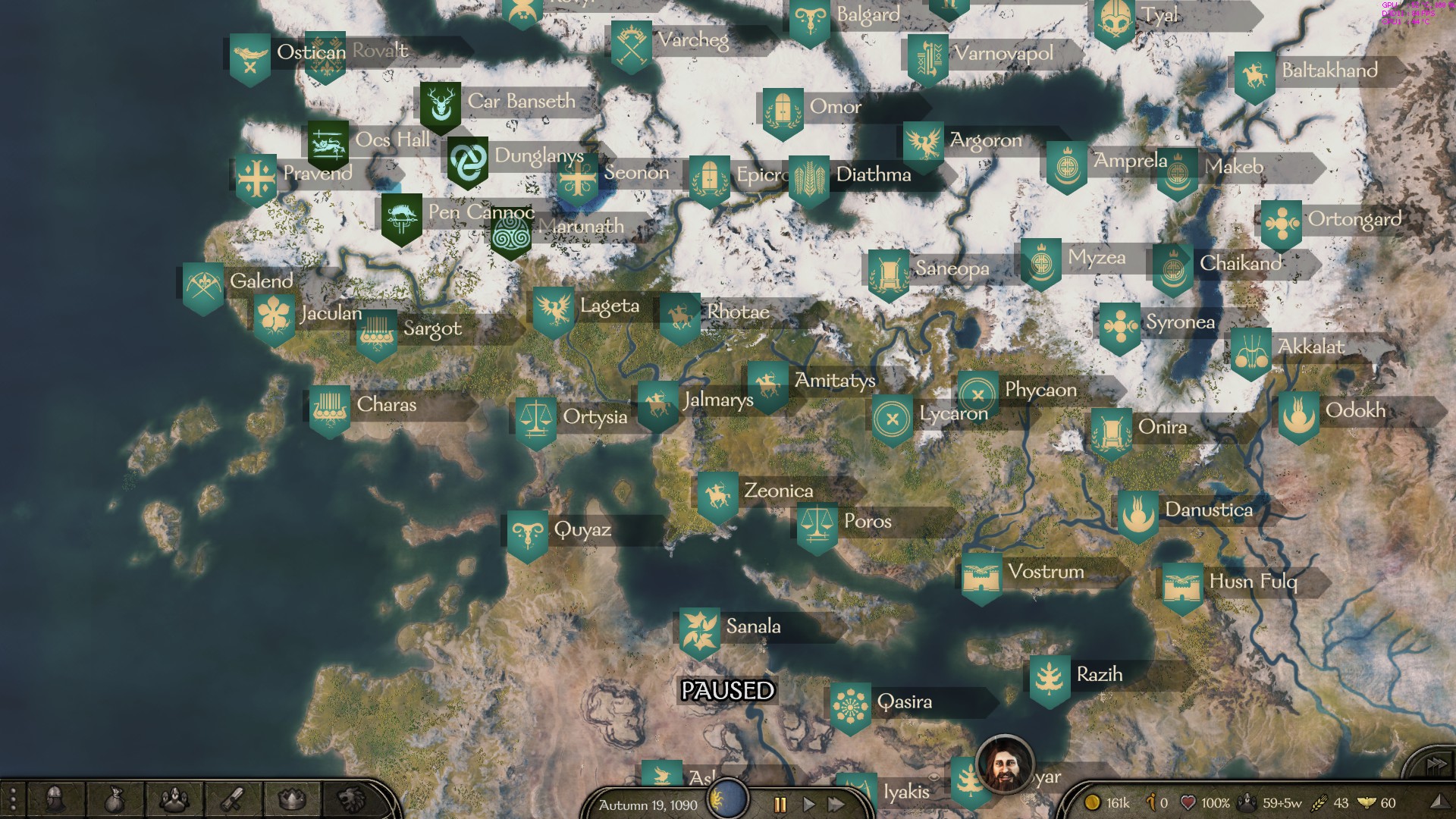 They need to address to this issue as soon as possible. It literally nullifies everything you'd done throughout the campaign makes it unplayable.

By the time you reach any notable status, half the map is dead.

With the already lacking / locked off late game features, there's just no reason to keep playing after like, day 70...
No one I've spoken to likes this.

Honestly just kills the mid-late game and even moreso the replayability. Sucks all interest out of the later game, its just, 'kill this one last faction remaining in a mindless war.'

Damn, yeah, not much to do at that point. Especially since we cannot start out own kingdoms yet. Has anyone tried playing through this to see if any factions attempt to reemerge? Is that even possible right now?

Triune Impurity Rites 999 said:
Damn, yeah, not much to do at that point. Especially since we cannot start out own kingdoms yet. Has anyone tried playing through this to see if any factions attempt to reemerge? Is that even possible right now?
Click to expand...

I stayed with Vlandia after it was destroyed and it was nigh impossible to get the Kingdom back on its feet. The problem is that all clans defect to the winners (which also accelerated the destruction of Vlandia) and the King is unable to rally a significant force. As a player if I had reached clan level 4 I might have been able to take a castle and defend it to see what happens next, but sadly my save game has become quite unplayable. Clan level 3 I could rally a 300 men army, take a castle, but I would be greeted with a 1k stack in one week every time and give up the castle.

In my save batannia is dominating. They took the whole western empire at the start, , part of sturgia, part of vlandia. Khuzaits took part of northern empire. And southern empire took more than half of aserai. So its gonna be Batannia vs Khuzaits by the looks of it, with South Empire as the last pinata.

The snowball effect is insane. 1 big loss and its over for the faction. Supporting armies that come to the aid outside of the sieged town/castle looking at the sieging enemy army and doing nothing is stupid and probably the biggest issue. They should either attack the sieging army if they can win or have a chance of winning. Or join the actual siege battle. Else whichever faction attacks 1st will win the war most likely because of all the reasons mentioned above.

I think the biggest catalyst for the snowballing right now is the army system. Most times my kingdom has 3 armies formed up, and they are all individually taking settlements.

I think this could be temporarily remedied by limiting armies to 1 active at a time, basically like Warband marshalls.

Gand said:
I think the biggest catalyst for the snowballing right now is the army system. Most times my kingdom has 3 armies formed up, and they are all individually taking settlements.

I think this could be temporarily remedied by limiting armies to 1 active at a time, basically like Warband marshalls.
Click to expand...

I do not think its the army system, I am fairly sure the major problem is the defection system. More than half or all the lords defecting to the other side auto destroys a faction.

When i was join to kingdom, they already have war with 4 other kingdoms, this is mby reason too why all just die too fast... in Warband is in War with 1 rare 2 kingdom in 1 time

The armies system is a 50/50 chance I think. Half the time armies of 500+ men strong form and are capable of fighting a long drawn out war with big battles. The issue comes in when there are no suitable marshals and the King himself is too stumped to gather an army.

No one comes to join the army, maybe like 2-3 vassals with 50 men each at most, this is called marshal gathering inefficiency, I think its one of the bigger reasons for a faction getting steamrolled. Without a cohesive, large army gathered the faction simply can't co-ordinate.

Additionally I've noticed that with some vassals, mostly the Battanian ones, upon winning and wanting to capture them, they don't become my prisoner, they're free anyway.

The real kicker though is, those same vassals turn up literally the next in-game day with an army as big as they had the previous day. Its as if the battle never even happened.

The northern empire is very unbalanced. 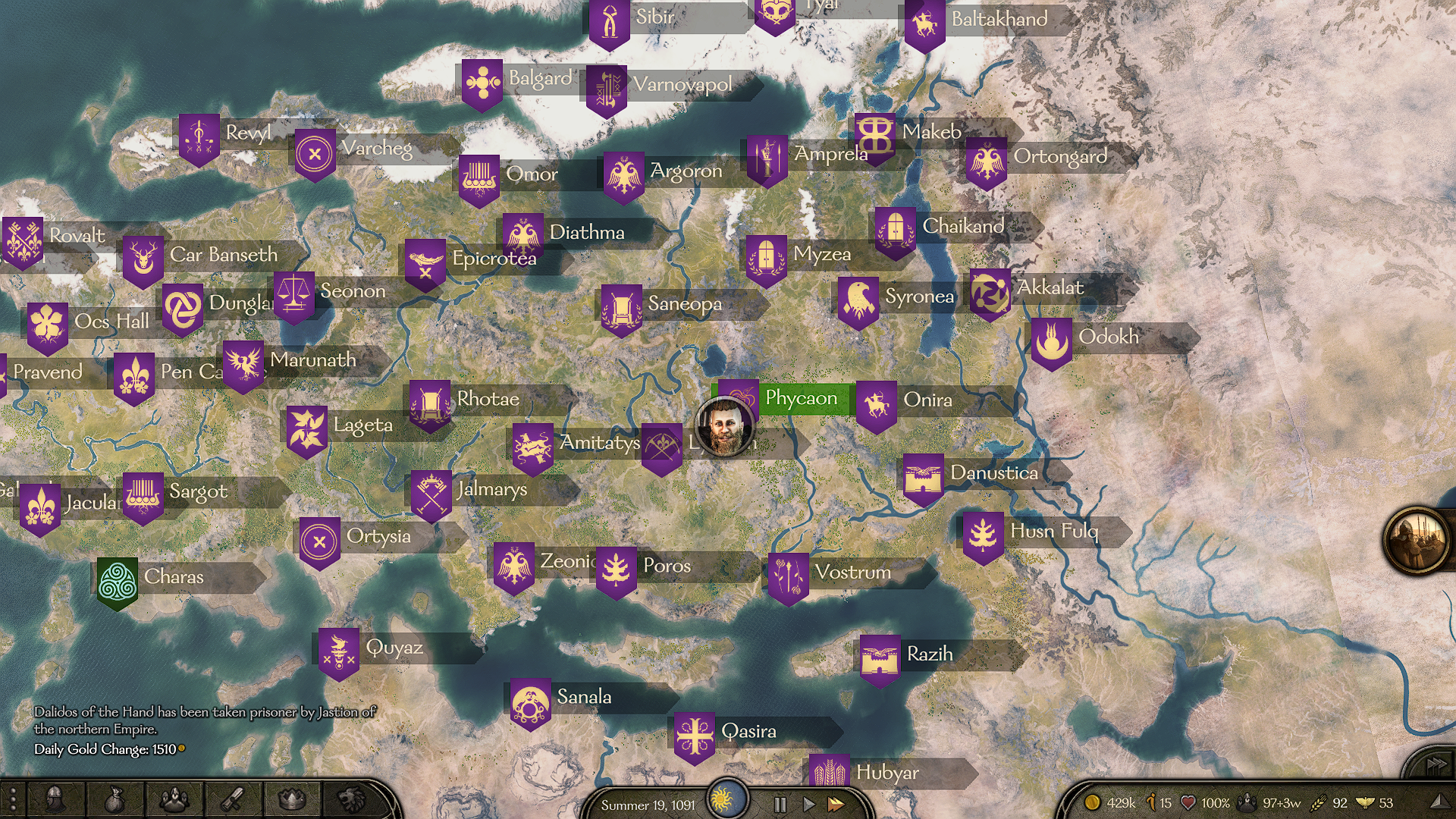 Yeah empires are unballanced, winner quickly eats everything else.. and by the time you can do anything it's over...

I just booted up my game for about 10-15 mins, we have 3 armies assembled, we have captured 5 settlements in that time. Its the armies.

This is a very real problem that happens every game.

I restarted once because the empire I wanted to join was eliminated, then I restarted to play as Khuzait and they were steamrolled... so I made a third campaign and just waited in a town.