I noticed WFAS had a rencent update.

If the devs are still working on WFAS, there are a few ideas I would like to share

1. Snow on Swedish territories -> Mount&Blade Warband had snow in it, WFAS has snow in the game engine but not in the game except for multiplayer maps, it would be nice to have some battles in snow in singleplayer. Or maybe Russia can have snow (those Russian winters), whichever region is usually colder, I'm not familiar with the real-life region.

3. Steppe territory in Crimea -> For the same reason as snow, it would be nice to have more diverse territory to fight on. The tattars are like the "Khergit Khanate" of warband with mounted archers and all.

4. Different color for main quests -> The storyline quests should have a different color than the normal ones, such as red or yellow.

5. New Faction: Moldavia -> Warband and Napoleonic Wars have 6 factions, it would be nice to add one more faction for WFAS as well. Moldavia is south of Ukraine, West of Crimea and East of the Carpathian mountains.

6. Borderlines -> For the sake of immersion, the map could have borderlines with the color of their respective nations. In case players would prefer otherwise, they could be turned on or off in game options. 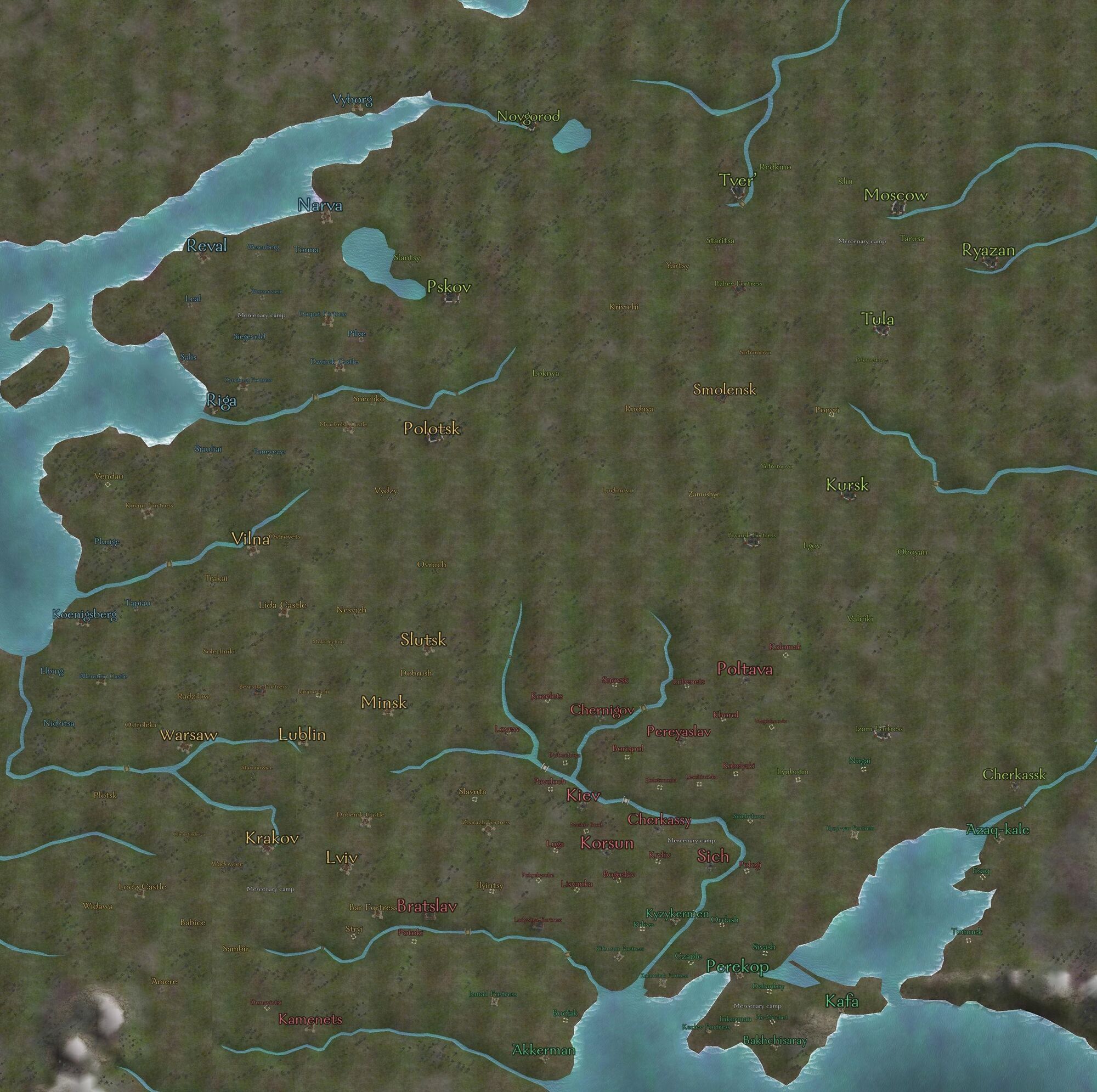 Short Story: The foundation of Moldavia is attributed to the Vlach (an old exonym for Romanian) noblemen Dragoş of Bedeu, from Maramureş, who had been ordered in 1343 (1285 after other sources) by the Hungarian king to establish a defense for the historic Kingdom of Hungary against the Tatars, and Bogdan I of Cuhea, another Vlach/Romanian from Maramureș, who became the first independent prince of Moldavia, when he rejected Hungarian authority in 1359. Bogdan I left his lands from Maramures with his army and part of the Vlach/Romanian population, by crossing the mountains to the east, after entering in conflict with the Hungarian rulers.

The greatest Moldavian personality was prince Stephen the Great, who ruled from 1457 to 1504. He fought the Hungarian Kingdom, the Polish Kingdom and the Ottoman Empire, with success, for the most part of his rule. Stephen III was succeeded by increasingly weaker princes, and in 1538 Moldavia became a vassal of the Ottoman Empire, to which it owed a percentage of the internal revenue, that in time rose to 10%. Moldavia was forbidden to have foreign relations to the detriment of the Ottoman Empire (although at times the country managed to circumvent this interdiction), but was allowed internal autonomy, including sole authority over foreign trade.

Prince Vasile Lupu had secured the Moldavian throne in 1634 after a series of complicated intrigues, and managed to hold it for twenty years. Lupu was a capable administrator and a brilliant financier, and soon was the richest man in the Christian East. Judiciously placed gifts kept him on good terms with the Ottoman authorities. Citing Vasile's reliance on his Greek and Levantine retinue, as well as an alleged dishonoring of his wife by the Prince, Gheorghe Ștefan managed to expel Vasile Lupu, but the latter was helped to regain his position by Bohdan Khmelnytsky's force, sent to Moldavia to depose him. Gheorghe Ştefan regained Iaşi and remained on the throne, making sure that the Ottoman power was appeased.

The Turks grew weary of Gheorghe Ştefan's natural alliance with Transylvania and Wallachia in which they saw the seeds of emancipation. The Sultan Mehmed Dördüncü was irritated further by the active part Moldavia played in Polish matters during The Deluge, in the same camp as Sweden, the Cossack Hetmanate, Brandenburg and Wallachia. Mehmed understood this to be a step towards the challenge of his own rule.
Click to expand...

I know this can be easily done with mods, I just wanted to share these ideas for the devs as well.

WFaS hadn't a recent update, they added the steam cards like 1 year ago, and after that, nothing.

Leonfav_il_piccione said:
WFaS hadn't a recent update, they added the steam cards like 1 year ago, and after that, nothing.
Click to expand...

Not even future plans for a new update...