History Dark Ages: know who they were and how they lived

I'm more surprised by the seemingly triangular shield almost in pieces.
Who had shields that shape back then?

Recently I found some interesting information in a book about anglo-saxon art:

There was no proper "clash of cultures" when the germanic tribes immigrated to/invaded Britain, as one might have imagined it due to the usual phrasing of the Anglo-Saxons driving the Britons to the peripheral regions of the Isles. Moreover the culture and art of the germanic tribes coming to Britain was not in total opposition to the celtic culture of its indigenous population nor to the culture of the retreating romans, nor was there a purely celtic culture among the population in southern post-roman Britain.

The Angles, Saxons and Jutes had been in contact with roman culture for centuries and had already in their homeland adopted certain elements of roman art and craftmanship into their specific styles. These were mainly designs for military equipment but also women's clothing and ornamentation of jewelry. For example the common motif of a bearded head supported by seabeasts is an adaption of the roman protective motif of Oceanus, accompanied by marine beasts, that was often found on the shields of roman soldiers. Furthermore high-status burials of germanic chieftains often display roman status symbols, not as spoils of war, but in a such a way that the dead person was put on one level with high roman military officials, which were the highest roman authority known to the germanic peoples in the regions adjacent to the limes.

The romanisation of the populace of modern England and Wales was even more intense and a certain romano-celtic style had developed, especially among the higher strata of society, influencing both the artistical ornamentation and decoration of military and day-to-day equipment as well as burial rites. The celtic craftsmen had also adopted techniques from the romans and continued to be prized for their skill after the germanic tribes had occupied parts of the land.

In the period after the main invasion, burials of mixed style appear, where either romano-celtic persons are buried in roman-celtic clothing but in a saxon-style burial, or germanic chieftains are found, dressed like roman officers, their graves stuffed with pieces of romano-celtic craftmanship. The decoration of sword hilts, brooches, buckles, etc also shows a remarkable mixing of romanoid geometric motifs, as well as specific celtic and anglo-saxon animal and cross patterns. Furthermore there is archaeological evidence that strongly suggests that there even was a belt of continued romano-celtic population north and north-west of Londinium/Lundenwic, i.e. it is highly likely that there was a considerable degree of intermingling of the different ethnic groups throughout the isles.

Thank you for the interesting read, iskar. A good example for the adoption of Roman status symbols by Germanic people is the tomb of the Merovingian King Childeric I. († 481/482), which has already been discovered in the year 1653. Sadly the vast majority of the golden items have been smelted down later, but fortunately the find has been documented rather detailed before.


Aside from that, I think, Kwal is referring to the last picture of the charging men and not to the first picture showing a training situation. 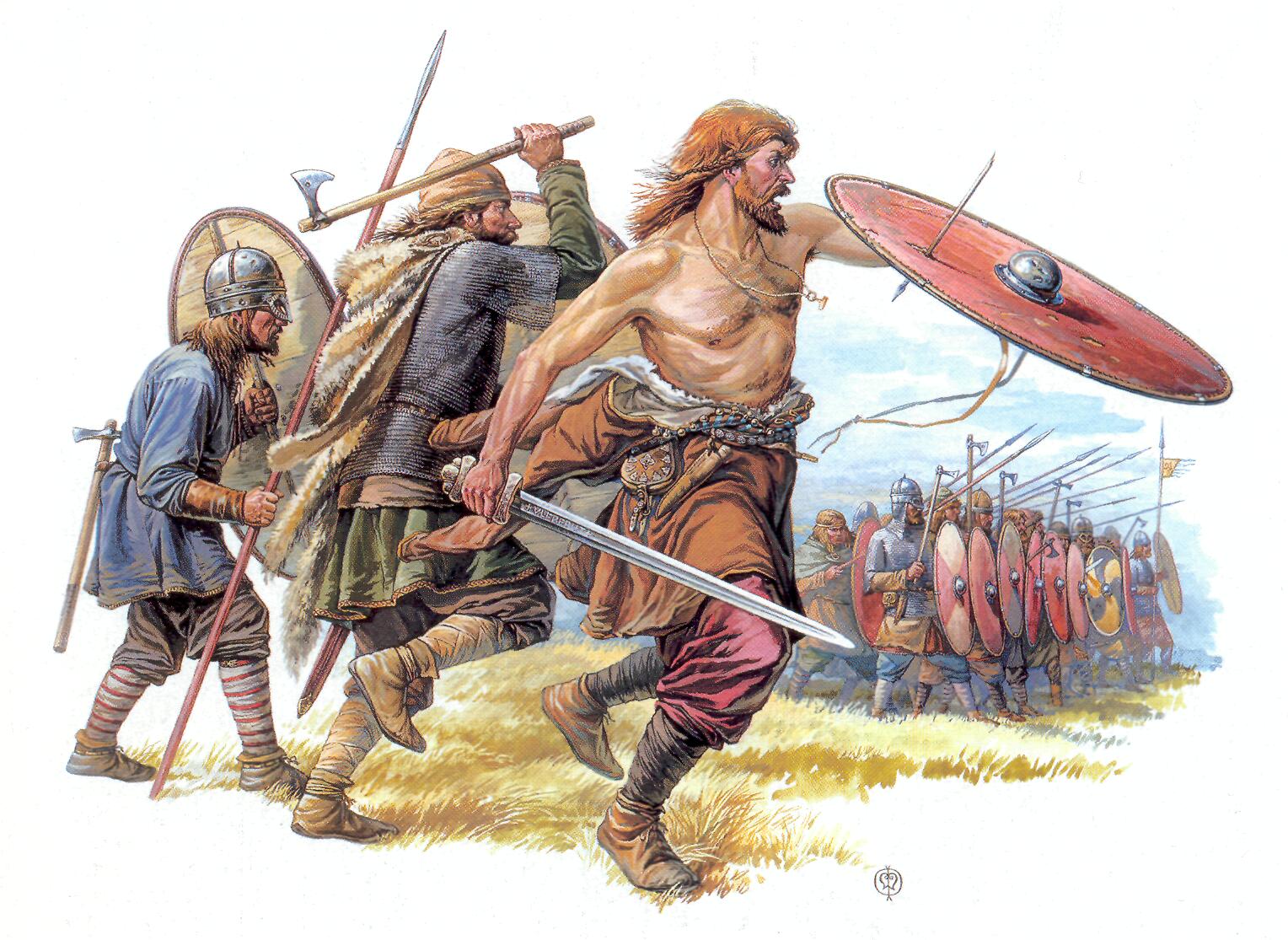 Interestingly enough the sword of the topless man is not only richly decorated, but it also displays the inscription +VLFBERHT+, which is said to be typical for Germanic, high quality swords of the Early Middle Ages.

Does anyone know what type of axe the warrior to the right is wielding? It looks like an oversized throwing axe. Besides the flag in the middle looks more like a high than an early medieval one.

Hospes fori said:
Does anyone know what type of axe the warrior to the right is wielding? It looks like an oversized throwing axe. Besides the flag in the middle looks more like a high than an early medieval one.
Click to expand...

could be a francisca axe I highly doubt it. The curved shape of the axe head indeed reminds of the Francisca, which is the reason, why I described its appearance as "oversized throwing axe", but obviously the whole axe depicted is much bigger than a Francisca and particularly the shaft is too long to allow a decent throw. Besides the axe appears to be socketed, which was absolutely unusual for this region and time period.

Maybe offtopic, but i found an article about german clothing in 0-600 A.D. in czech region. Language is czech so you might not understand (google translate will help  ), but pictures are pretty good and you can use them for textures in future versions.
http://www.archeologienadosah.cz/sites/default/files/haute_couture.pdf

odysseus1 said:
Maybe offtopic, but i found an article about german clothing in 0-600 A.D. in czech region. Language is czech so you might not understand (google translate will help  ), but pictures are pretty good and you can use them for textures in future versions.
http://www.archeologienadosah.cz/sites/default/files/haute_couture.pdf
Click to expand...

Interesting! thank you. It is a pity havent english version.

The leather boots on that Germanic/Viking warrior in the second picture look very fancy, with laces and all.

The 3rd picture is almost funny. 2 guys presenting their spoils of war as if their picture is taken.
Could they be Normans against the Byzantine?

Great image. Killing with one arm while carrying loot under the other.