I agree with the problem description.


bltzn said:
In warband, larger battles were broken up into smaller individual battles where you returned to the world map after each one, and had the option of continuing to fight or (depending on your relative power level, leave or attempt retreat/surrender). I think this should be introduced to Bannerlord as an option. When a battle exceeds the battle size you have set, either reinforcements spawn in as they do currently or you "win" the battle and exit to the campaign map, depending on the option you have selected.
Click to expand...

I don't think this was good feature in warband and would not like in Bannerlord. All troops and horses were refreched, the tactical positions were abandoned and even the map were reset!


bltzn said:
Have reinforcements appear outside of map borders if possible or at least at the very edge. Have a short but prominent message that gets displayed when reinforcements spawn (e.g. Friendly/enemy reinforcements have arrived)

This is nice. Add in a delay to allow re-supply- zones where arrows and throwing weapons is resupplied. And move the spawning away from the reinforcment point.

Frustrating in an understatement. Some larger scale (1000+ vs. 1000+) can just be straight up torture and basically devolve into what I call spawn chaos. Like where streams of individual soldiers all charge into the battle completely separated drawing out the battles needlessly. The issue is so bad I've made sure to keep a couple saves highlighting how awful these large battles can be due to the spawns.

This isn't even the worst, but it's like watching two opposing groups of ants fight over a cube of sugar: 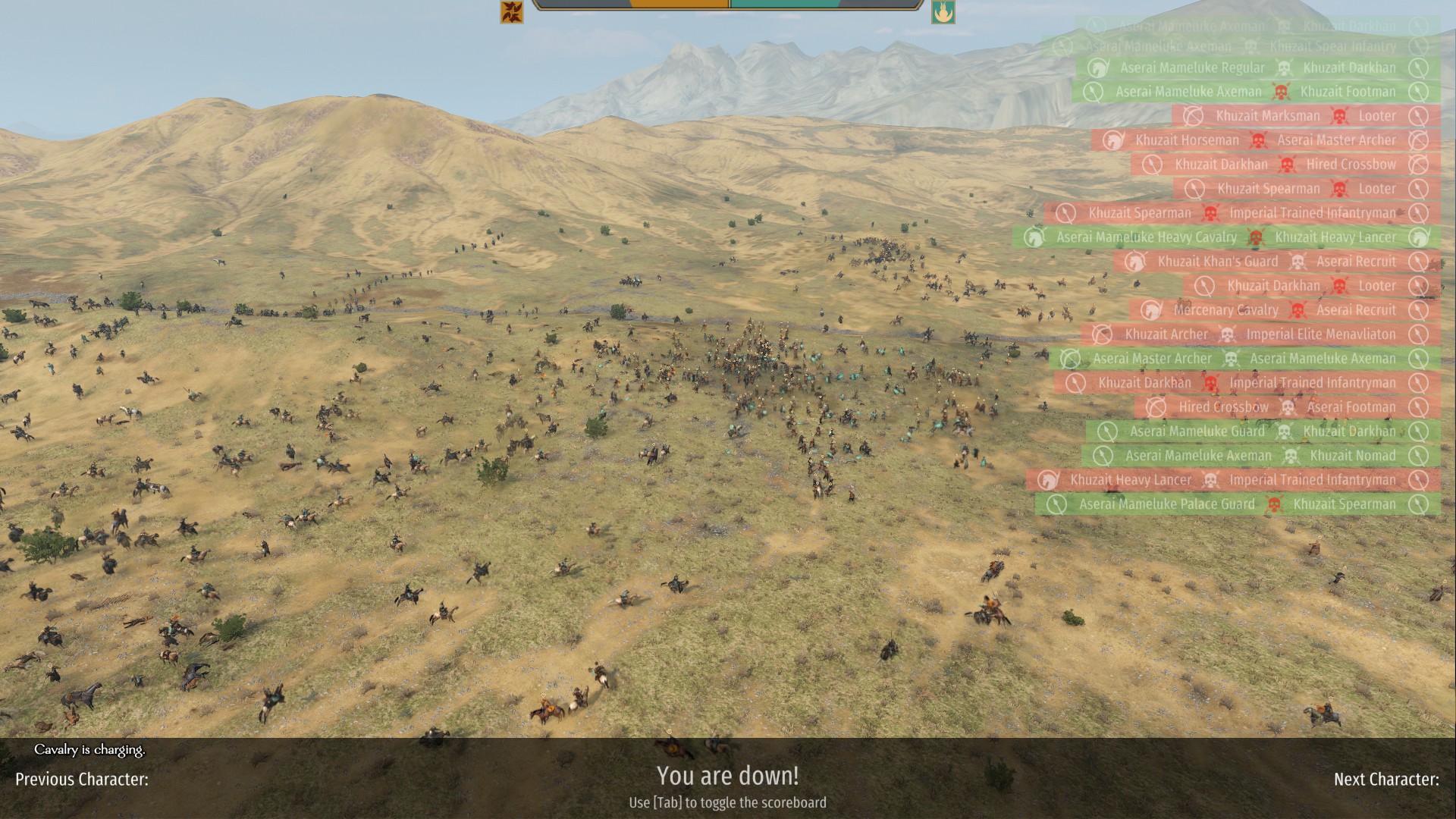 I thought a bit about the spawn mechanics and my best guess is that having units spawn from the "Boundaries" wouldn't really solve anything since the A.I. would just cluster at the boundary instead. So spawning troops would literally just run into a wall of enemies or the A.I. would dance back and forth even more then it currently does.

Really I think you're right OP we need to go back to "sequential battles" (I never played Warband much so I can't comment on larger battles) where if your limit is 500 then that's how many units spawn in. So if you have 300 Troops and your opponent has 300 Troops, your 1st battle both 250 fight each other, then you fight a 2nd battle with your remaining 50 Troops (assuming previous battle was fair 1 to 1 KD ratio).

Though this would be kind of lame for Siege battles in particular. Maybe battles could be separated into "rounds" where you don't leave the battlefield per say, but once there's a clear loser (0 Troops) you and your opponent can redeploy formations in your spawn areas. Suppose this could be tricky to implement, but it would be very worthwhile if you ask me.


All I know is large scale battles and the A.I.'s inability to use ladders properly have got to be the two biggest and most frustrating flaws in the game - making it borderline unplayable at times. If these issues can't be fixed I'm very dubious of Bannerlord's future even with mods. (Maybe removing spawn limit would help, but that will probably kill most people's computers sadly.) This gif more or less sums up my current experience:

What about a marked spawning point, add some camp-features depending on target. This is there already when attacking caravans - a few wagons and mules/horses.

And maybe an UI notification/countdown?

It's eerily familiar to Warband. I agree that it sucks.
You shouldn't be able to spawnkill NPCs in a video game like it's CoD.

It would be better if they spawned outsize the redzone and wandered in like in Medieval 2.

Also the chain of command problem needs looking at - large battles do devolve into an ant scatter for some reason.
You must log in or register to reply here.