So it's a Nidhogg ripoff? Cool, I guess. 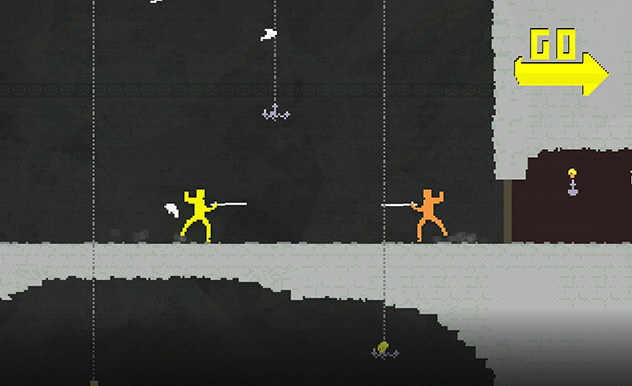 ...They plan a multiplayer version in the future, that should be great...

Seems like a very blatant ripoff to me. Perhaps the biggest I've ever seen in the videogame industry.

Didn't the original Prince of Persia beat Nidhogg  to it?

You need to find someone else to do PR,

You are right, thanks for the advice!
However, if you have any suggestions or want to follow the game upclose, here is the discord channel: https://discord.gg/H7HZnMs

Thank you all so much!

Not like you deserve anything but the bottiest, blandest PR after the warm welcome you provided.


Good luck on the project.

The only other ripoff more blatant than this one I've seen is jacobhinds' game. Literally a clone of aoe2. Shameful.

Guys I am actually pretty chill, I think you misinterpreted my tone in my previous posts. I was really just saying that I was inspired from Nidhogg, but I worked hard on making a completely different combat system.
Apologies for that. I really wanted to constructively talk about why this would be a ripoff, since it does kind of hurt when people call your work a ripoff if you don't see it that way.
Anyway, after I noticed that my post was seen as aggressive I immediately took a step back. Last thing I want to do is argue aggressively over the internet.
So I just thanked you for the feedback and left a discord link if you want to leave more constructive feedback.

Duh, before you ban me I have already sent a PM to JohnnyDale explaining ze ways of the ****posting and that I don't really mean it. Felt bad towards someone who is unusually not a **** in TW and so innocent.

Do you have a dev map going forward, Johnny?

yeah sort of, all I'm missing is maps, unlockables, and online play. I have other stuff in the list, but they are in the maybes and post release. Being a solo Dev I need to be careful in not being too ambitious featurewise.

Age of Empires II: The Densetsu, created by Westwood Studios is a known troll. Ignore his hateful posts.

Stronghold: Crusader is a known lier. Ignore his dishonest posts.

Thank you so much! I sure will!

Lolbash said:
stop calling anything related to swords "WB like" because this besides the theme has nothing remotely related to Mount and Blade
Click to expand...

The directional combat is similar to mount and blade's and that's it.
Might be closer to For Honor, but it doesn't have all the stamina and "fighter-like" features such as combos and whatnot.