B Tutorial Shader Ghosts and Shaders

https://forums.taleworlds.com/index.php?threads/minitutorial-adding-a-shader-in-game.215114/
https://forums.taleworlds.com/index.php?threads/shader-tutorial-by-scion.300499/
How to add custom shaders to the Warsword Conquest Module:
There are two files in the root mount and blade warband folder called mb_2a.fxo and mb_2b.fxo, these are the main compiled shader files. We must add our own mb_2a.fxo and mb_2b.fxo to the warsword conquest root folder in order to load our version of the shaders. Like this:

To do this you must first compile mb.fx. Extract the ghost pack to a suitable location. In the ghost pack in the shader folder you will find the precompiled shaders

Mb.fx is the precompiled main shader, it's in text so you can read and edit it. mb_2a.fxo and mb_2b.fxo are compiled as binary making them hard to edit.

Run compile_fx.bat. This will take a little while. If there are no errors it will create mb_2a.fxo and mb_2b.fxo in the shader folder.

(I included zombies.brf in the pack it has all the right settings for reference)

The rest of the setup is done in open brf:

Creating the shader in a brf (zombies.brf makes sense).
Settings for shader: 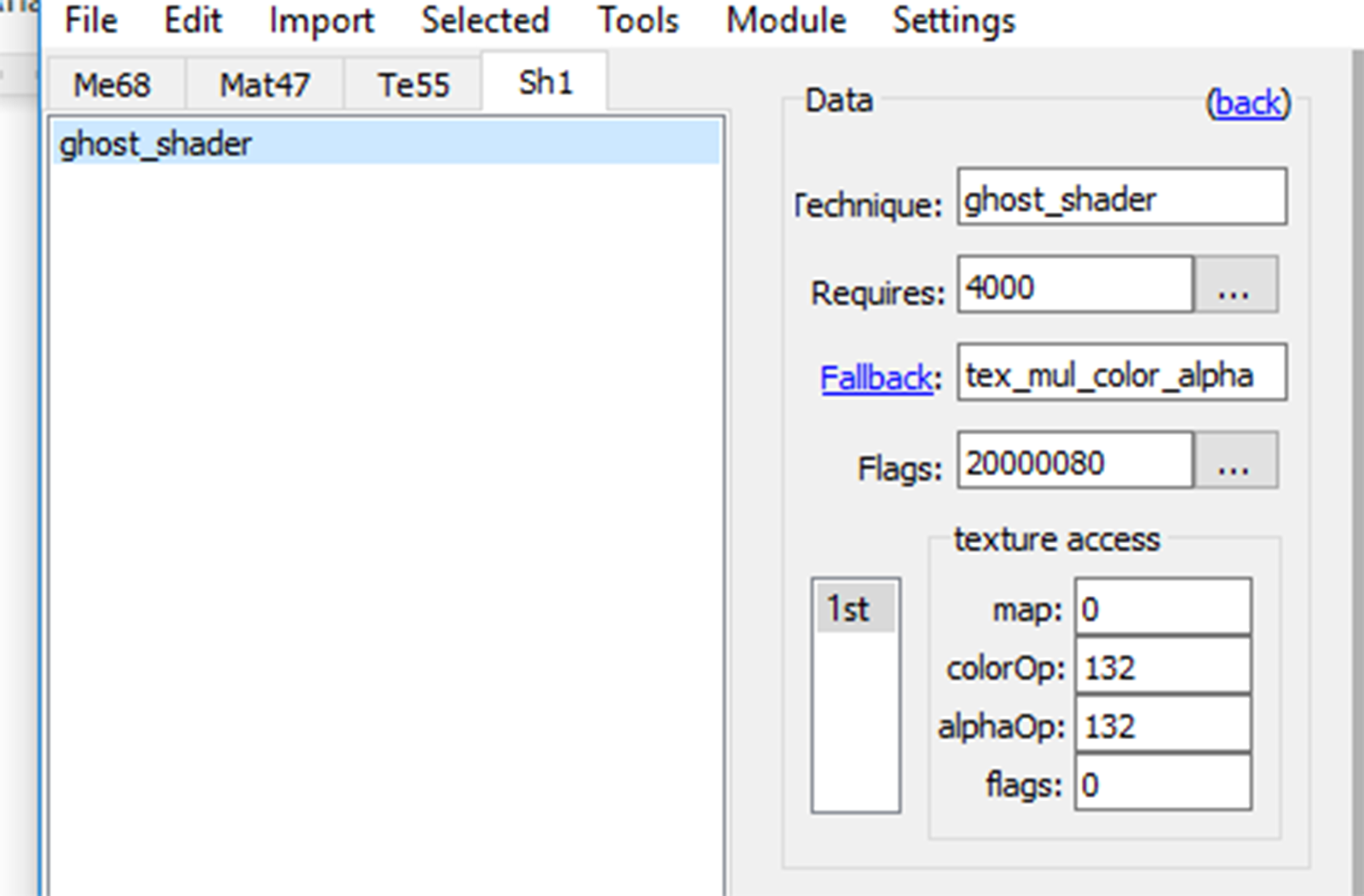 Requires 4000 makes the ghost shader work only for people running mount and blade on high settings.
Fallback tex_mul_color_alpha is a diffuse shader with alpha enabled.

Setting up the material correctly: 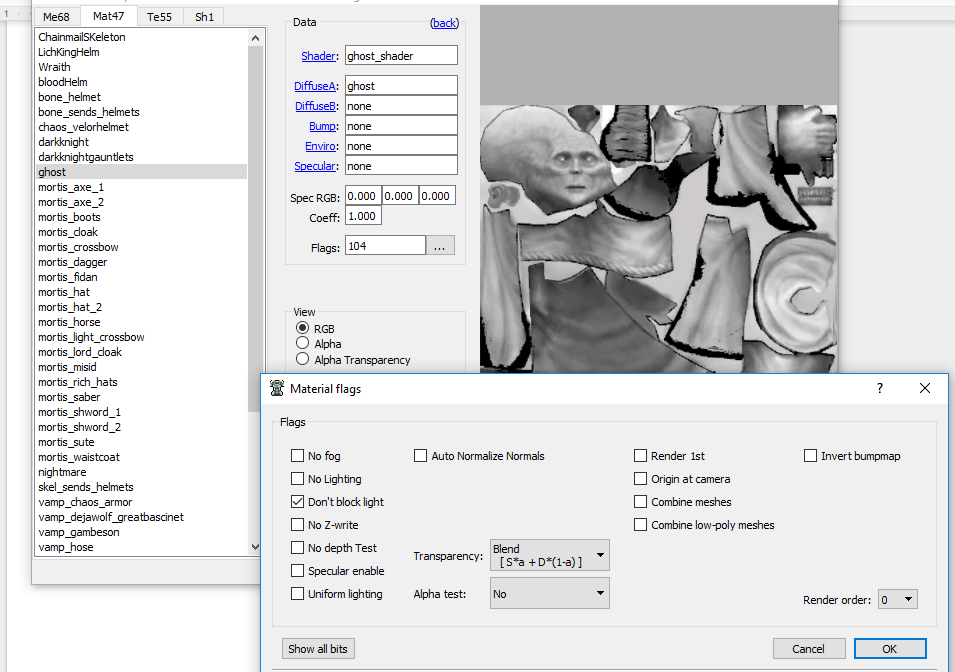 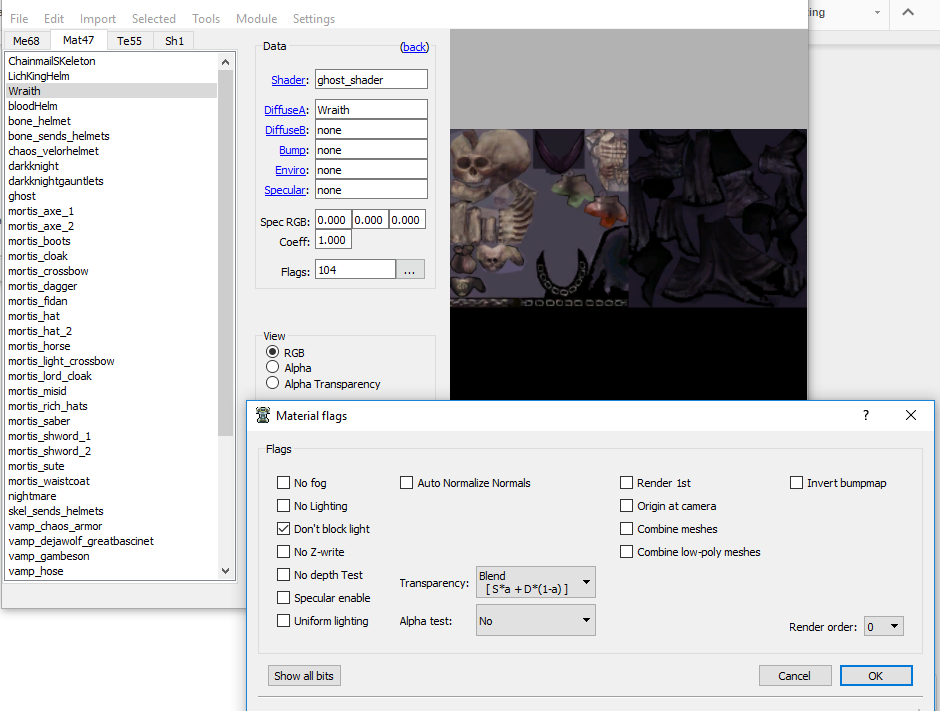 That's it! hopefully they work in-game!
Making changes to a hlsl shader:
The following is an quick guide on editing the ghost shader. It is additional information for anyone who’s interested.

Open mb.fx from the ghost pack with notepad or a text editor. This wall of text is the precompiled warband shaders. 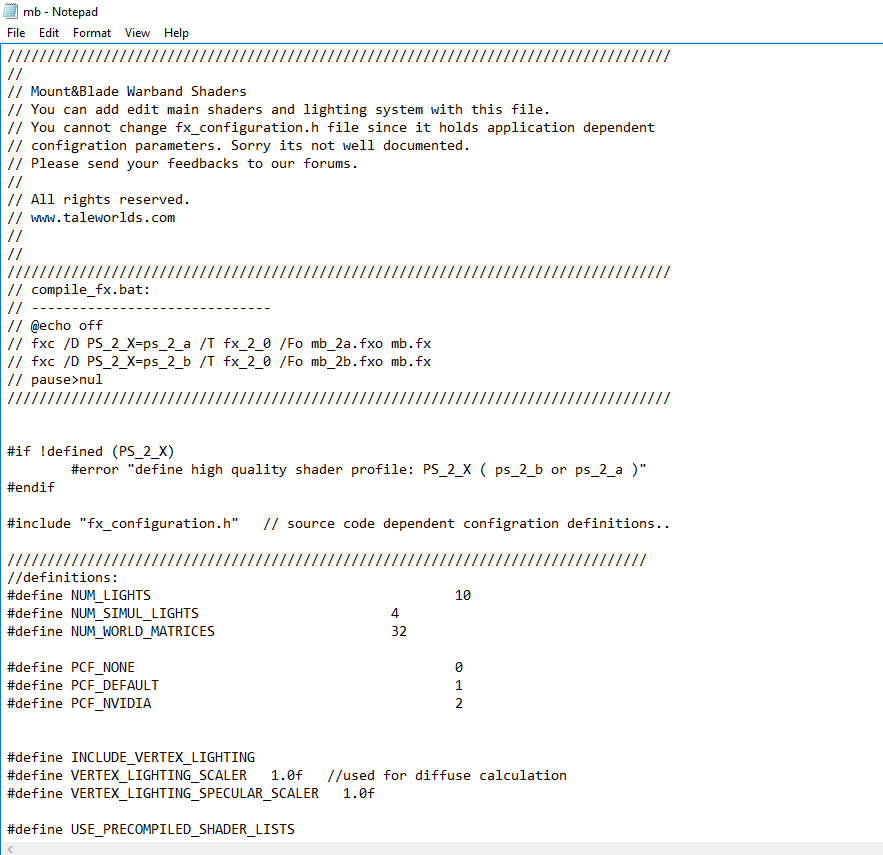 They are hlsl shaders written for shader model 2. Scroll to the very bottom of the document. 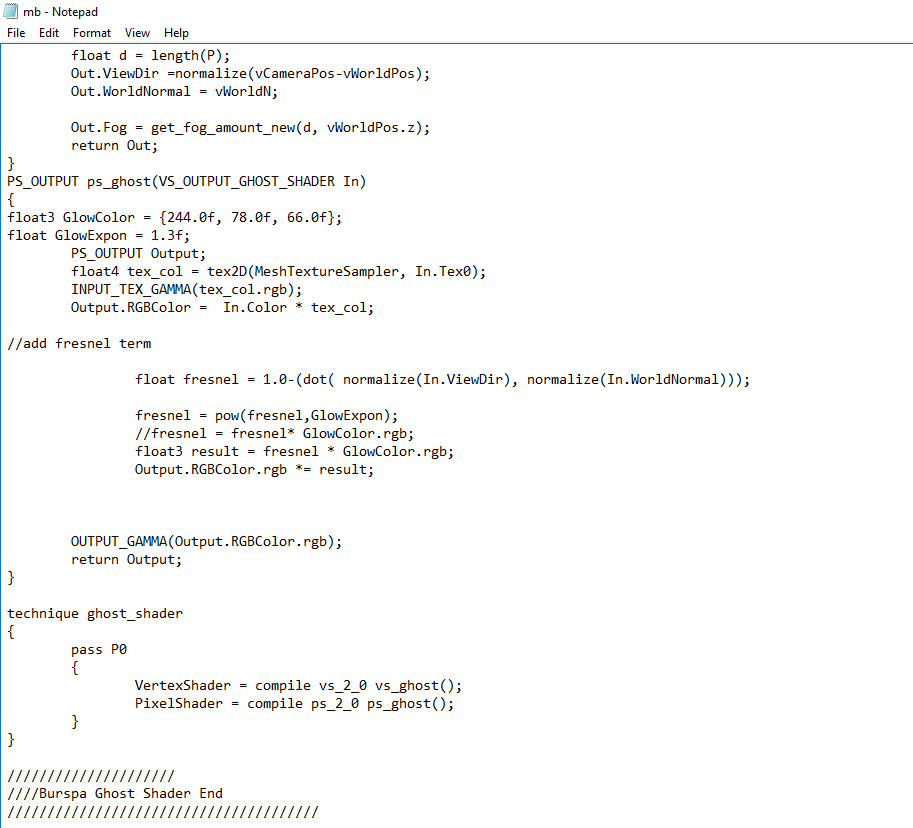 The ghost shader begins at

Code:
and ends at

Code:
The ghost shader is a modified diffuse shader with fresnel applied. A simplified explanation of fresnel is that it finds the edges of an object. A simplified explanation of the shader is that it finds the edges of the ghost mesh, the size of these edges is based on GlowExpon, and combines the color of these edges (based on the texture assigned), with GlowColor.

Rgb values must have .0f on the end because they are being stored as a float.

GlowExpon is the inverse size of the edges so:
GlowExpon = 0.3f would mean the edges would be huge and almost the entire ghost would be coloured in.
GlowExpon = 6.0f would create small edges and would create a nice rim lighting effect that fresnel is usually known for.

If you make any changes to mb.fx you will need to recompile as per instructions at the beginning.

Thats all there is to changing the ghost shader.

A tip for altering shaders for Mount & Blade:
Copy all the data from the ghost pack /shader folder to mount and warband root folder (make sure you make backups of the files you replace). Make sure the module you’re using does not contain custom shader files. Now make changes to mb.fx directly from the root warband folder. And when you compile now the compiled files will be in the correct location. Now open warband in edit mode. Find the unit you are changing in edit mode. With warband still open, make changes to the mb.fx file save and recompile. Now in warband edit mode, press ctrl + f, and the shaders will be updated in game. This allows you to quickly make alterations to shaders for testing ingame without having to restart warband.

Since the shader doesn't include skinning deformations inside the VS, if it's used on a skeletal mesh it will apply the deformations via CPU which is pretty inefficient.

C-like:
You must log in or register to reply here.

In Progress D3D11 File emptying with every restart