Jhessail said:
OKW and OKH had entirely workable, solid plans for taking Gibraltar and Egypt and the Middle-East...
Click to expand...

Okay, I'll give you Gibraltar, but Egypt? Even doing it in that order sounds like a daisy chain of best-case scenarios, if you don't want to lean too heavily on the Regia Marina.


Jhessail said:
...that Germany did not, economically and industrially, go to total war footing until mid-1942...
Click to expand...

Even then, they took somehwere between a year or two, getting into gear. Which, I think circles us back to Hinds' hyperbole again.

Jhessail said:
I'm not saying that Germany could have won the war - that's ridiculous and impossible.
Click to expand...

Aren't you contradicting the rest of your post? There is always so many variables, major decisions are made based on imperfect information distorted by lack of data, biases, impulsivity. There's also dumb luck. People stroke out, planes with important people randomly crash, kings fall in love with American women and abdicate.

Suppose, Germans manages to actually encircle and trap the entire BEF, a corruption scandal in FDR's administration erupts shortly before the 1940 elections and Republicans win it, rolling back Cash & Carry, Lend-Lease never happens, the German-Japanese "alliance" always fragile, dissipates over some petty personal antipathies or something, so anything Japan does or doesn't do to America, doesn't connect it to the European war. Curiously, Germany and America might even find themselves both supporting China against Japan. Churchill, an obese alcoholic in his mid 60s naturally and understandably dies and Britain peaces out as Hitler hoped. Or it's Hitler who gets a random aneurysm and is replaced by less edgy Hess, who maybe becomes some sort of Khrushchov to his Stalin and he works something out with the Brits, something that doesn't include annexing half of Western Europe, but would still count as victory for Germany in the West. The war in the East might start years later or even never and instead there's decades of a cold war between Germany-led continental Europe and the USSR.

The possibilities are endless.

The war in the East is a pretty crucial part of Nazi ideological policy. This leads to two things:
a) Your folks are lining up, eagerly waiting for a share of their promised Lebensraum.
b) Their folks know you're coming sooner or later. And are probably disinclined on getting Lebensraum'd.
Now, you can put the whole thing off for a while, but if you want to keep **** going, promises will have to be kept. And there's still a few IOUs needing repayment, so you'll be wanting to go through someone's couch for spare change.

I suspect 1940s Brits would still prefer to avoid a continental hegemony if they can help it, too. It's cheaper than cranking out new battleships.

The communists in Russia went from a zeal about a world revolution to "socialism in one country" in ~ 5 years and everybody just shrugged and went with it. The actual Cold War never escalated into a hot one. It easily could have, but it didn't. How did declaring war on the USSR help Germany to repay debts? Did they (hope to) capture a hoard of gold or get a leveled reward from the quest giver? The IOUs were (afaik) mostly held by German companes and individuals. A consolidated dictatorship can deal with this. Monetary reform, or just defaulting because **** you, we can. Soviets did it with Imperial Russia's debt after the civil war too and in the end got away with it.

Brits may prefer whatever they want. But as Jhessail said, Churchill's rhetoric was never really put to a test. The BEF was evacuated, cash&carry did continue, lend-lease was enacted. Sure the Navy could protect the islands and most colonies indefinitely. But why? What is there to gain by remaining at some sort of permanent sitzkrieg with Germany, when you can just admit it's what it is and get on with it, since Germany doesn't really want anything from you.

What if this bridge and road had been completed?

That's surprisingly cohesive despite how drunk I was!


kurczak said:
Aren't you contradicting the rest of your post? There is always so many variables, major decisions are made based on imperfect information distorted by lack of data, biases, impulsivity. There's also dumb luck. People stroke out, planes with important people randomly crash, kings fall in love with American women and abdicate.
Click to expand...

Yes, that's true. In this context, what I meant that there is no way for WW2 to proceed historically and then BANG there's some big point of change and the Nazis end up winning everything they want. That's impossible and for one good reason:

Because by late summer 1945 the Americans will have the bomb and the Germans will never have enough fighters to stop a single B-29 flying from the UK from dropping it on Berlin. And that's that. Maybe Hitler isn't in Berlin and the Germans keep fighting but that just means there are more radiative hot spots in Central Europe after the war. Sure, the details change and the cost of the war changes but the ultimate outcome is the same. Germany was nowhere near to developing the bomb and they didn't have the resources to finish their fledgling project in any reasonable timeframe. Japanese weren't even on the same page and the Soviets had no clue. It took the immense resources of the US, UK, and Canada joined together for several years to make it a reality. Soviets only caught up in the 1950s thanks to a massive espionage effort and knowing what to look for.

Now, if you take the US out of the war, things already change radically. Now it becomes possible for Germany to bleed the Soviets out. And it's probably possible to wear Britain out - they didn't give up with Napoleon though that took decades so who knows if they would make a deal with Hitler eventually. Or yeah, Adolf has a seizure, Göring overdoses and Hess takes over before Himmler has enough power to crown himself and he scales back things. Basically, any significant change to the outcome of WW2 requires significant changes to a lot of things, many of them taking place before the war, hence my earlier line that "Germany winning WW2 is impossible".

In my opinion (and I don't have anything in particular to back this up, so excuse me) but I think Nazi Germany could have dominated Europe, it's just that attempting it militarily and through occupation was always going to fail. Nazi Germany would have had to be less Nazi and more Germany, but this is a slight deviation from history to say the least.

RightQuandary said:
...but this is a slight deviation from history to say the least.
Click to expand...

Understatement of the Anno ****ing Domini.

Jhessail: fair enough. The alt-histories where This One Small Thing changes and then everything unfolds according to some supposed iron laws of history are dumb.

Hey, guys, does anyone have any sources of buckler (or a very small round shield, any way) used during the 13th century? Most of my online searches showed heavy use in late 14th and 15th centuries, but I've also seen some re-enactment actors using bucklers with ~1250 AD costumes. And those guys tend to take their hobby seriously.

I haven't read the text though. Maybe it is worth a read.
To me as an unprofessionell, the armor looks to fitting with 13th century. 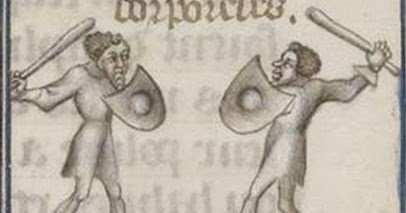 Episode 46: Strapped Shield Use vs Bucklers in Medieval Artwork

Renaissance Martial Arts are alive and well. My blog focuses on history, fencing, and the practice of arms in a modern context 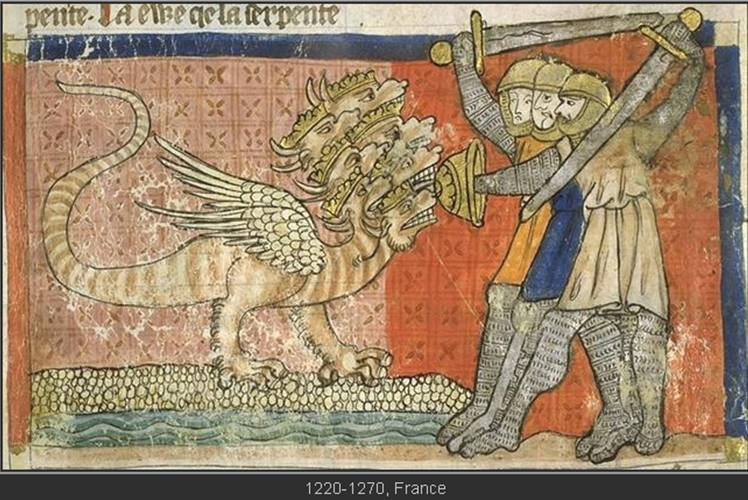 Well, as early as the 12th century there is evidence of the use of this versatile little shield. In the first known swordsmanship manual, the "Eskirmye de bokyler" (Buckler Fencing) already tells us that its use was quite widespread in the 12th century, and its illustrations show different throws between knights armed with swords and deflecting their opponent's blows with a small buckler. 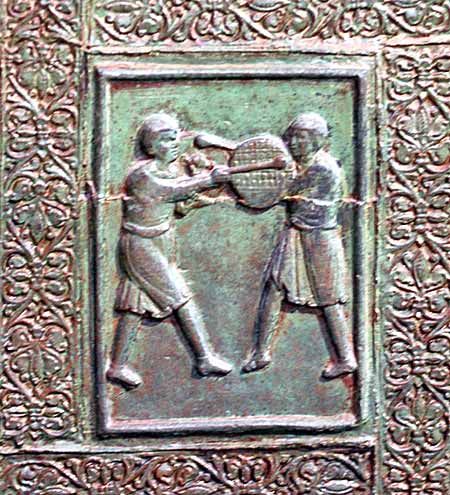