Hello, I decided to take vanilla Gekokujo 3.0 and polish it, removing all obsolete things, fixing bugs and, making a use out of not used content, improving scenes, etc.

I decided to not to follow the content lineage of Sogoroku nor Daimiyo submods (despite loving them and playing them for a long time), since fixing them until perfection is much harder, considering the amount of content.

Instead I want to bring vanilla Gekokujo to a state of perfection, and do that in as many aspects as possible. 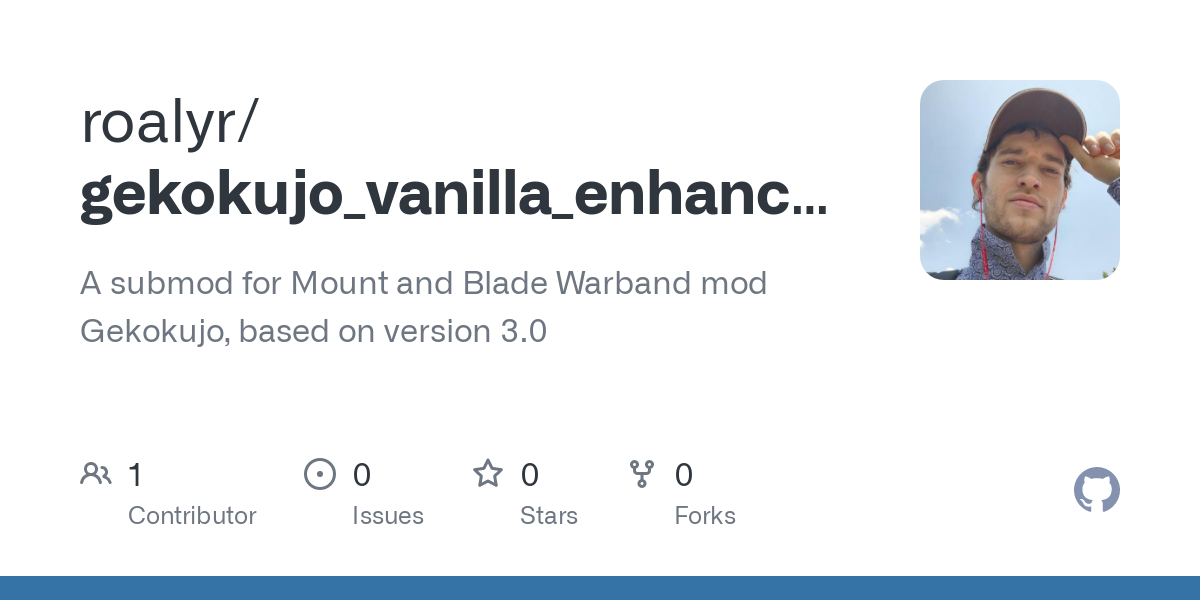 Also, I am not aiming at exactly depicting historical attributes here, but rather focus on gameplay and visuals (scenes are the biggest priority).
Thus I am not thinking to import things from non-vanilla gekokujo for now.
Also, what do you think about couching lances? I see it as making everything but pikes (the longest ones) couchable.

First Question: I dunno if I'm playing the game on direct 7 or not
Second Question: I don't mind the guns with their accuracy, the reload time could maybe be quicker imo and I'd like to be able to move whilst reloading plus maybe being able to use them on horseback (I don't know if some of those things are present in 3.0 as it has been a long time since I played it considering I've been doing 3.1 and Daimyo more often in recent days)
Third Question: I don't really care too much about that matter regarding clan colours.

I like the idea regarding the lances and making them couchable.

The most important thing is to improve the commander AI. They are too easy right now.

I have toyed with different shaders to finetune vegetation and fix shadeless textures in Dx7 mode. So far so good. But I messed CommonRes materisls and shaders in process, that is a minor issue.
I also fixed vegetation collision models not being linked properly.
Also I cleaned scene_props, by deleting 2/3 entities that were loading native models (castles, houses, interiors, etc) not used in Gekokujo. With that I also unlinked few dozen resource files from module.ini. It feels oddly satisfying to not to load all the unneeded content on each startup.

Next I want to finetune scenes to make them more interesting and beautiful, maybe add some more vegetation, fix misplaced "floating" rocks, trees, etc.
Most of the gameplay happens in fields after all.
Then I will look into terrain borders.

Also, the way I like to play it is by enlisting to lord army and setting the game to play on its own (when battle begins I hit Ctrl+F5 and character fights under AI control), while I watch and do something else meanwhile.

Me second question: how do you feel about gun accuracy and reload time?

Personally I think that the vanilla mod does it just fine. Guns should be bloody deadly and reasonably accurate, especially in the hands of Samurai troops. And the currently slowish reload times work fine as well. I would change nothing.

Also, firing on the move is absolutely essential. I know its not historically accurate but it's just such a quality of life thing that you just can't go without it.  In fact, one of the primary reasons why I prefer the regular mod to the submods is because I can reload on the move.

The reason is stupid warband AI. Basically, when your troops start firing their rifles they will do so out of any turn and as soon as they spot an enemy. And there is no way to tell them to stop reloading. So what inevitably happens is that I'll order my troops to move and perform some maneuver only to find half of my skirmishers ignoring that and just standing pretty reloading their rifles. And by the time they are done the enemy is upon me. Worse yet, if I don't order the rest of the formation to hold fire someone else will just fire by the time they are done thus resetting the wait. And if I do order that... well you don't need me to tell you why that's stupidly suicidal.

My third question is: faction colors. What should they be?
I would honestly just keep them as they are in the base mod. The point of faction colors is primarily to know who is who when you are on the battlefield or the world map. And for that any colors will do as long as they are sufficiently distinct from one another and not too garish. Like, no neon green and stuff.


Also, if you want my suggestion on a feature one thing I've always wanted to see in this mod is full historical names for all the lords and locations.

Reload on the move, or even on horse is a matter of 2-minute fixing.
I also usually set different weapons to different attachment points so that they could be all seen on character, without replacing each other in the same position.

Also, someone told me that ashigaru gunners were more common than elite samurai gunners. What about it?

As for names - I am not against it, but I never investigated this matter to know where to search. Maybe there even a list-like database? If you have any input on that I will consisder it.

Also I am looking forward for city and castle images and maps to re-create them accordingly, but last time I tried, finding them was not so easy.
Again, if you have input on this - I will appreciate it.

The blending of textures with alpha channels is imperfect, but whatever.
Tuned vegetation colors a bit more for a better picture, all in all I am satisfied. I have yet to do some more tweaks to the palette though, but already rendering with Directx7 looks very decent. Directx9 rendering looks good to, but final word will be after I take comparison screenahots. Next on the list will be generating LODs for vegetation where needed, but so far with no LODs the performance is decent. I suppose that is because LOD0s of the models are quite low-poly already.

After that I'll look into scenes and skyboxes. I noticed that there quite a lot of empty-space battlefields, and the vegetatiin is rather sparse.

So I looked into how Warband generates scenes for map encounters, and, well, I am not entirely satisfied with the fact I can't really influence it.
Anyways, I settled down with standard_nobump_nospec shader for trees and bushes, since color and shading looks much better than in case when flora_shader is used. A bit weird alpha channel drawing at some angles, but the pros outweight this.
Now I am looking through all vegetation models and fixing minor bugs, and misplaced UV maps, occasionally deleting bad looking models altogether.

So I discovered a nice tree generator for Blender, and I decided to recreate native Japanese flora with it.
What I think to do, is, basically, to make complete hi-poly hi-res texture trees and then render them from different angles to get good quality textures for trees or their parts and then slap them on primitive billboard-like tree models.

I am not too satisfied with native or gekokujo vanilla textures, to be honest, that is why I am venturing this way. And modeling each tree manually is quite a big task.

All in all I want good visuals for battlefields because, as I mentioned prior to this - that is what one sees the most in the game, and I believe they deserve good vibe.

How demanding is this going to be in the end? One of the major selling points of the original mod is that it can run on even low spec machines and do so better than regular M&B.

Don't worry, I run it on Intel Pentium 987 1.5GHz + Intel HD (Sandybridge, I think), that is why I am so meticulous at making Dx7 rendering appealing.
And, obviously, smooth on FPS.

I am yet to test new trees, because generating them correctly is a bit challanging. At this moment I am trying to render pine branch, and I carry on researching the way to do so for third day already. At least I had made some fir branch textures in process, but crooked pine is a bit more challenging. Leaf tree branches will be much easier, compared to needle trees. Then I will re-touch the renders with image editor and use them on flat billboard-like polygons Attached to trunk, which is basically how low-poly trees are made for vanilla. But I aim at having better, accurate and more diverse textures while reducing polygon number in about a half.

For instance, if you take the most simple branch billboard model, you will see that it is made from two rectangles, placed like sandwich bread pieces (with normals flipped outwards, so that you can see branch texture from both sides), and two more at 90 degrees to these, to provide visuals from sides too. In this simplest case you have a shrub that consists of (2 + 2) x 2 = 8 triangles or polygons. But the thing is that one doesn't need rectangular billboards and can use triangular ones, because it doesn't matter when it comes to making UV map, so all the same simple 4-side bush can be made with just 4 polygons.

Obviously, it is a matter of a balance between quality and performance, but I believe that this struggle is worth it since why not to have authentic flora with at least some uniqueness to it, instead of a lot of trees with all the same texture looking like clones.

Here is a quick test tree I came up with, just 56 triangles. Basically, in this fashion any "spherical"tree could be done.
https://p3d.in/K2bMQ
2 1024px textures.

Random question. Well two of them:
1. How similar is writing shader code for warband (I assume that's what you are talking about when you mention shaders) to just writing it for other stuff like OPENGL?

2. Where did you learn it and how do I learn it. I am doing some OPENGL work lately and writing shaders is a mystery I can't approach as I don't know where to start.

I don't know how to write shaders and that is not what I do.
Instead, I use openBRF, navigate from mesh to material and then to shaders, look at available options, then go back to material and assign different shader as well as mess with material flags (usually for blending) and alpha threshold.
OpenBRF does not export shaders, nor I don't know of a way to import/edit them.

So I tried this model in the game. The mesh looks so-so. Not too ugly, but neither too good. But texture resolution made me happy.

This model is more suitable for smaller shrubs.

Now I will try a bit more complex mesh.

I tries this one but is looks awful
https://p3d.in/veilr

I have succeeded a bit with tall pine trees, but they are 4k polygons and it influences performance when the grass is on. But i have ideas on how to improve this model. The best part is that I finally found the right branch texture.

According to this tutorial:
https://youtu.be/y8dckLFkIJU
I will be able to make good looking and performance-friendly flora.
I have tested it with an ugly maple and it indeed works like charm. No sharp shadows that are betraying the low-poly-ness of a mesh.

Now it is only a matter of making good looking models and optimizing them without any concern about going too low on polycount.
You must log in or register to reply here.