It was exactly the sort of cathartic bull**** we needed. I thoroughly enjoyed the episode.

Good episode but I am getting a bit tired of D&Ds lackluster ideas in regards to battles:

They had the possibility of Umber switching sides, they even built up to it with two lines by both Jon "Will his men fight for him if he is not willing to fight for them" and Davos "we will hit our own men". Once the Smalljon stepped forward and shouted "who owns the North" that would have been the perfect moment to switch sides. Damnit.

Apart from that good episode shock and tension wise, even though the surrounding of the infantry was an utter joke, no one in their right mind would just stand still and watch till your enemies surround you.

Funny how they made a mistake at the end. At how Sansa reminded Ramsay in the end that he said himself that his dogs didn't had anything to eat for 7 days. (Or something).
While at the moment Ramsay said that, Sansa wasn't even there. And it's not really something Jon and Sansa would chat about in their war-council.

onceknownastemujin said:
I remember praying to all that is holy that they'd never ever bring catelyn stark back, hated her in the books and the show
Click to expand...

Will you just sod off already? I was enjoying being able to read this thread without having the discussion continually bogged down by your attempts at trolling, or whatever it is.
Click to expand...

It's honestly a shame he came back at all.

Starks are so ****ing stupid they all deserve to die.

gokiller said:
it's not really something Jon and Sansa would chat about in their war-council.

Definitely not, given that Sansa didn't even let Jon know that she had already sent word for reinforcements in an earlier episode after he specifically mentioned that no one else was coming to help them.

Hi! My name is Skippy.

The stupidest decision certainly was to not count Wun Wun as an advantage at all. He wasn't even mentioned during the planning... you've got a literal giant that usually shrugs off arrows and bolts, but you don't arm him nor give him something sturdier to wear? It's like they wanted him to die.

gokiller said:
it's not really something Jon and Sansa would chat about in their war-council.

Definitely not, given that Sansa didn't even let Jon know that she had already sent word for reinforcements in an earlier episode after he specifically mentioned that no one else was coming to help them.

I wonder, did all of these soldiers decide to pile themselves on top of one another after being mortally wounded instead of trying to crawl away from the battle? Or, did the living soldiers think that it would be a good idea to climb and fight on top of the dead bodies to get a better vantage point before falling in turn?

Wun Wun should've had a weapon. He had more than enough time to whittle a tree trunk or something.

What's annoyed me about the episode was that they're setting up a very obvious sibling-divide. Sansa's ego killed most of the men on that battlefield, if she couldn't just get her head out of her ass and tell her brother there's a very large army, most of it mounted, that was heading up north to meet them. If I were him I might be a little pissed at that. That might've been sound advice to give you twat, "Dont do what he expects" get the **** out of here type of **** is that

Also, props to Rickon to dying like a right dumbass. Run in zigzags, would've made it much more difficult for a lone archer to hit him. The mountain of corpse-wall thing was **** stupid also. Would a regular phalanx not have sufficed? We get it, war **** sucks and it doesn't care who you are when the bodies hit the floor - you're just another individual fighting to stay alive

Who gets Winterfell now, the bastard or the girl? I mean good that Ramsay's dead and all, that was pretty satisfying to watch
The most "this feels right" scene was the unfurling of the Stark banners on the castle walls, imo
but they're likely going to argue over who gets the castle, and what exactly's next for them.

Wonder what's going to happen when Jaime hears of this, since he's effectively the next hurdle Jon and Sansa have to face - marching North to reclaim the North, House Stark would have to be reinstated or completely eradicated. Jon might become the Lord of Winterfell and be legitimized afterall, or Jaime will march up north (since it seems to be so **** easy nowadays) and then FINALLY Winter will come and it'll be Westerosi Avengers as Sansan, Jun Snu, Old Man of the Sea, Walking Beard, with its own convoluted romance between Brienne and Jamie, as they fight the undead menace together.

Also, Jon Snow is AA, whilst Dany would be Ptwp, Im guessing after that line Tormund said that Jon isn't a king

Arriguy said:
Also, props to Rickon to dying like a right dumbass. Run in zigzags, would've made it much more difficult for a lone archer to hit him.
Click to expand...

I absolutely loved the cinematography in this episode. This shot here was my favourite I think: 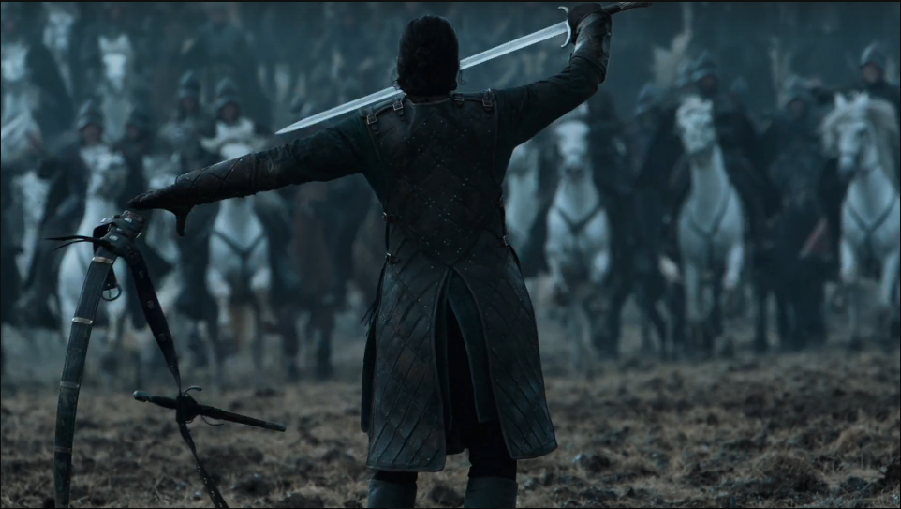 I was very satisfied with the battle scenes, they felt realistic and just as chaotic as you would expect a real battle to be. 9/10 GoT episode for me.

I also really liked it even though tactically it was really a bit of a mess. Also the Jon with a shield walking up on Ramsay scene just screamed Mount& Blade.


Surprise cavalry charges are the eagles of GoT.
Game of Thrones - only place where you win battles seemingly because of the fact you make idiotic decisions, since the mighty screenwriter's hand has to bail you out.

Good thing Ramsay didn't know the trick of shooting at the legs. They always do that in Warband.

Mr.Milker said:
Surprise cavalry charges are the eagles of GoT.
Game of Thrones - only place where you win battles seemingly because of the fact you make idiotic decisions, since the mighty screenwriter's hand has to bail you out.
Click to expand...

Except they weren't winning? They were absolutely getting destroyed because of the idiotic decision. Of course it's a ****ing disgrace that Sansa didn't mention a huge army of knights coming to their aid, but perhaps it's setting up for a sibling divide or somesuch? Maybe Sansa's ego got in the way there?

I don't know if it's just the whole incestuous relationship between Cersei and Jaime, but is there a bit of sexual tension between Sansa and Jon?

I don't know. I keep seeing sexual tension everywhere after the sexual crucible that was Jaime and Brienne's meeting. They literally looked like they were about to rip each others' clothes off.

Now, if certain theories are correct about Jon, it could even work between him and Sansa.  I don't think it'll go down that road, though. Then again... I don't see any other love interests... but then... it's not like the other female house leaders have those either.

Yeah, when Asha said that there's some big iron **** incoming for Dragon *****, and the way she looked at Tyrion after that, you just know.
You must log in or register to reply here.

B Medieval Fantasy A World of Ice and Fire: The Known World
2

SP Fantasy [WB] The Realms of Fire and Blood
2