I will ask, is there a prison door on Dragonstone, and if so where? Lol

Apologies if this has already been answered a million times, but now that bannerlord modding tools are out is this mod still going to be developed for warband or is all the focus on Bannerlord now?

Added around 50 new face codes created by Shark8.
Gave Westerlanders new helmets.
Added two new armour textures from Kraggrim.
Companions will now recruit armies of the players culture.
Added Blocs Northerner Horses.
You can now learn how to read at a citadel.
Added some new locations to find.
Removed Craster as a Wildling lord.
Made some small changes to the map.
All troops with throwing weapons should now correctly wield them.
Various adjustments to diplomacy. Essos wars are now unlocked but will not mingle with Westerosi factions.
Various adjustments to Sieges. Removed some of the ai triggers which caused a lot of issues with units getting stuck.
Slight adjustments to castle/village walkers. Code taken from VC.
Added female children.
Tweaked children code.
No Lords will defect in static wars mode.
Some Lords will only auto-defect if they have -100 relation with their liege.
Added new battle standards/banners to every faction.
Re-wrote code for Septry's plus added a few more. You can now attack all septry's and reap various consequences.
Added some new events for static wars mode.
Adjusted some starting relations to slightly adjust game balance.
Added new Longclaw model created by Lotnik.
Some events will only trigger if the player is King of the Seven Kingdoms.
Completely re-wrote the religions and all code related to this. Many changes and bugs have been fixed!!
Added a new sword for Braavos troops.
Added polished buildings.
Standardised most prop objects.
Optimised more collision objects.
Changed how merc companies work. This also fixes some bugs that occurred with them.
Reduced the size of the Arak.
Gave all northern footmen shields.
Tweaked flora code.
Added some new trees from CWE and removed some others.
Rechecked and changed all the companion reputation types.
Changed critical damage system to VC system.
Removed several conflicting triggers.
Tidied up the mission templates files.
Added AO to all items.
Added AO to any LOD's missing them. This fixes some of the 'popping' that occurred when changing LOD's.
Removed battle time and coop scripts etc.
Removed all instances of WSE as it was causing issues.
Added character menu presentations from VC.
Added camp menu presentations from VC.
Updated stamina code and presentations from VC.
Added build settlement feature, code and inspiration from VC.
Removed old options presentations and added new from VC.
Added ship travel from VC for player and AI.
Added sea battles and all features relating to this from VC.
Added new party icon scripts.
Re-added lords deal extra damage and take less damage from Custom Commander.
Added troop tree presentations from VC.
Added Companion presentations from VC.
Merged all menus etc.
Added the scenic view presentation from VC.
Removed loot wagon as it could be exploited too much.
Removed old menus and presentations.
Added new menu backgrounds.
Updated wound system to VC system.
You can now name your child.
Added 38 brand new tracks created by Milan Cizek (removed any native tracks left). Previews can be found here Added several new ships.
re-arranged/tidied up the loot screen.
Adjustments to the path finding on the campaign map. You should hopefully be less likely to be pulled towards the roads.
Adjusted all map icon sizes and re-positioned some.
Added new ship icons and animations for all parties.
Updated decapitation from VC.
Removed jacobhinds moral system and used the one from VC.
Unsullied soldiers will not rout.
Added new ships modified by Kraggrim to work with the new sea battles. These include all new textures too.
Added the Iron Bank of Braavos.
Removed banks and the buying of land from all other locations.
Changed Maidenpool to a coastal/port town.
Changed various scenes.
Made changes to every castle and town scene.
Removed old port menus and port blockades in assaults.
Replaced honour with reputation.
As requested I removed the animations from the player special traits as it could leave your troops vulnerable for a few seconds.
All castles now also belong to a religion.
Changed all menu backgrounds for new. Some are much higher resolution.
Updated thrust animations to make them quicker/better.
Added 1 handed overhead stabbing.
Added 2 handed overhead stabbing.
Adjusted stats of all spears, lances, javelins and staffs.
Made Unsullied spears shorter and gave them different shields.
Adjusted core diplomacy settings and fixed some bugs relating to this.
Updated the weapon break scripts and triggers.
Weapons can be repaired by weapon smiths.
Changed prices for all armours, hats and shoes.
Made adjustments to all Westerosi troop trees.
Made quite a few adjustments to all VC presentations to fit AWoIaF and GoT's.
Added shaders from VC.
Updated Bloodloss code to VC system.
Added Wights.
Added Whitewalkers.
Added feature that only allows Wights and Whitewalkers to be killed by certain weapons. More on this later.
Added 2x Whitewalker armours including boots and gloves.
Added 4 x Ice weapons.
Added harbours to various towns that needed them.
Added updated HD textures from Warband update where needed.
Changed a few locations names.
Correctly gave Lemonwood to Lord Deziel Dalt.
Added 5 more villages to Essos.
Added 3 more villages to the Free Folk.
Converted all music to WAV format for better performance.
Added Great Sept of Baelor interior.
Some Dothraki didn't have horses which they now do.
Finished Bolster the Black quest.
Added the Lands of Always Winter quest.
Adjusted simulated battles if attacking Wights or Whitewalkers.
Re-instated Old Valyria quest.
Added Troop Quarters from VC.
Added second outfit from VC.
Replaced all quick battle and multiplayer scenes for native.
Added formations AI plus other templates to quick battles. Now you can play your own versions of the Battle of the Bastards.

Fixed several meshes missing textures.
Fixed several trees with low level LOD's causing issues.
Fixed issue with several missing trees on the campaign map.
Several small tweaks and issues resolved.
Fixed an issue where some Lords would stay as part of an eliminated faction.
Fixed a tonne of string errors.
Fixed the forest random battle scenes that started you on the edge of the map.
Fixes to Pyke siege.
Various other siege scenes tweaked.
Tonnes of minor bugs fixed.
Fixed some bugs related to companions.
Fixed 24 random scenes that did not have spawn points allocated. (could cause you to sometimes start at the edge of the map).
Fixed pyke prison entry.
Fixes to lots of scenes regarding floating meshes etc.
Fixed transgender dothraki armourer.
Fixed various vertex animation that was causing issues with some models disappearing at various distances. The Westerlander shield being one of them.
Fixed an exploit regarding the last part of varys quests.
Fixed a bug that could stop your child from being born.
Fix Highgarden passages.
Fixed all instances where factions would sometimes declare wars on others irrationally - ie when speaking to religious dudes.
Fixed an exploit where you could steal enemy troops if working as a farmer in a village.
Fixed an exploit with sieges that allowed you to easily starve locations.
Fixed an exploit with ulfs dialogue.
Fixed exploit in brotherhood of banners dialogue.
Fixed a bug regarding troop factions.
Fixed an issue with the Free Folk Marshall.
Fixed some Essos villages not being raided by the correct bandit parties.
Various fixes made to the first scene.


Plus some new pics - http://www.moddb.com/mods/a-world-of-ice-and-fire

As you can see a lot of work has gone into this update but we still need scenes creating, if you want to lend a hand and help create any then please let me know!

1. Practically one can't become king of seven kingdoms, kingdoms can only be defeated. Players can't upsurp title of king.
2. Companions can't recruit armies
But you have texted companions can recruit armies, but there is no such option.

This is as per awoiaf v6.1
Can you solve this?

In GoT show grey worm, ser jorah etc,... were followers of Daenerys, anyone of them could be made as army generalor queen's men,.................... but in AWOIAF warband game they are being made as vassals, totally they are different, because vassals own armies, they can own Castle and armies are dependent on their income. But army general is leader of lords army, army payment flows from lord's treasury.

How this could be solved?

I love the mod! Thank you for all the work.

I have never wanted to join a hub or write notes on any computer game in the past. 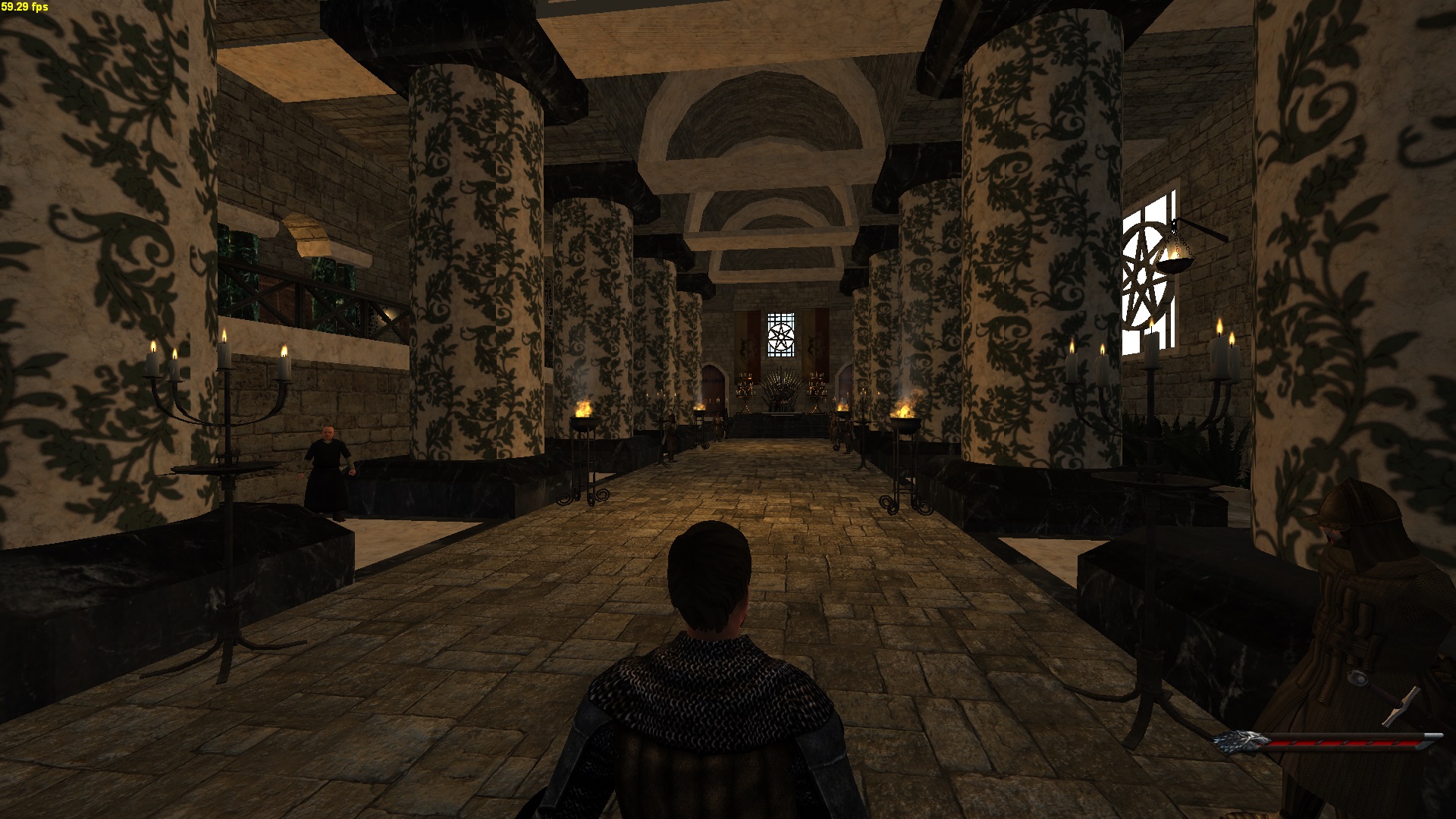 This design is fantastic thank you for the work, but I think there are some dead spaces in this room. When besieging the castle you cannot clear this room. Two of the five enemies spawn to some unseen spot.

I've been playing this a fair amount and have played up to around turn 1400. Through several playthroughs I have noticed a few things. I love this mod. These are not complaints.

-There is no chest in Dragonstone

-As noted above- Kings Landing Throne Room seems to have some dead spaces where enemies spawn but cannot be killed.

-Lords can be very bugged. I read about this in an older Reddit too.

-Lords from Factions that have been eliminated will frequently flock at players household castle. They will remain loyal to the dead faction.

-Lords names seem get into wrong order or are confused somehow by the program. On the city screen the wrong name may appear as the faction leader, but actual ownership is still correct. When sending an envoy the letter may end up going to the wrong lord. Or a lord from a random faction may ressurect a dead faction. It seems these troubles may be connected.

-Robb stark can be glitchy. He has appeared in one playthrough directly after the red wedding ( I did not attend) and remained at Winterfell as a lord of Roose Bolton. In another playthrough Robb reappeared much later in the game after the north had been ressurected by one of the Norvos Lords.

-The one time I managed to kill the Night King the War for Dawn Quest never came to any completion. I am quite sure all of the white walkers were killed.

Thank you for all of the work on this Mod and I hope this is helpful information. I hope this continues to be developed.
You must log in or register to reply here.