With the soon release of Bannerlord, it's likely that the support for Warband and With Fire and Sword will end, making this the last change for some suggestion to improve the now old games. And yes I know that there is a mod for everything, but it would be nice to see these features in the base game:s

1) Obtainable Full Samurai Set -> The samurai set is a nice as well as useful easter egg in the game, unfortunately, without using cheats only the short sword and armor can be found. I suggest making it possible to get the full set of armor without using cheats, regadless of game, it's amazing when you just wonder around the map and discover something unique as well as helpful.

This is my suggestion for where to place them:

Praven -> Short Sword (most players start in Praven, placing a powerful item there would give them too much of an advantage)
Rivacheg -> Greatsword (a good reward should be located in one of the least explored towns on the map)
Tihr -> Helmet (they are nords, best represented by a helmet, even if it's not their helmet)
Jekala -> Gauntlets (somehow this seems fitting, goes well with their infantry focused army)
Tulga -> Boots (like the nords, the khanate is best represented by boots, even if it's not their boots)
Yalen -> Sword (another rarely explored town in the corner of the map)
Bartyye -> Armor (probably the least explored town in the game, and the reward should be accordingly)

2) Tournament Mode for Multiplayer -> Just like the singleplayer tournaments, all players will have the same kinds of weapons, no buying equipment, the type of weapons used depend on the map and the colors depend on the nations: Swadia - Red, Rhodoks - Green, Sultanate - Yellow, Nords - Blue, Vaegirs - White and Khanate - Purple. I believe a lot of people will like this mod as Last Man Standing + Arena is already popular in multiplayer. I heard the Warband Native League 8 tournament is coming soon, imagine if you can play an actual medieval tournament in an esports tournament.

3) Somehow fix the feast maximum number of lords bug -> When you have more than 15 lords in a feast, the lord will be in that citadel but he won't be there at the feast, the same goes for ladies that can't be found when overcrowded. I imagine this can be fixed by adding more locations for lords even if it's in the middle of the corridor or by making the rooms larger, the latter is probably more difficult.

4) Add more snow on the map: Rivacheg and Wercheg -> I like battles on different terrain, which is why I it bothers me a little that there isn't enough snow on the map, and most importantly, there isn't snow in the Kingdom of Nords, they are supposed to be the sons of snow. I suggest adding snow up to the beach in Rivacheg, after all it's a northern sea, not a hot sea like the Mediterranean and the whole peninsula that Wercheg is part of.

5) Add more castles in areas rarely explored on the map -> There are some corner areas that could make a nice place for a castle so that they will see more action. While those castles won't have an offensive strategic importance there, their explainiation is that they are good places for a "last stand" or "last resort" in case most of the country is in ruin.

6) Native Multiplayer Maps as places in singleplayer -> Add the locations from multiplayer battles as ruins on the map to make it possible to visit those ruins just to see them, or possibly add some easter eggs or mission events there, and in case a battle is engaged next to those ruins the battle will be fought there similary to how battles are fought in towns. Of course in ruins there are no peasants to help or oppose you.

The locations are:
Ruins - the small peninsula between Sargoth and Fearieghen
Village - close to the mountains, north of Mawiti.
Ruined Fort - West of Jelbeli castle, on the same side of the mount as Gisim.
Field by the River - East of Vayejeg, on the other side of the river
Snowy Village - At the end of the river that passes over Khudan
Nord Town - Between Aldelen and Gisim, on the side of Aldelen
Port Assault - On the largest finger south of Jelkala
Battle on Ice - West of Wercheg, close to the beach
The Arena - In the open field between Saren and Halmar
Forest Hideout - North of Ilvia on the left side of the mountain
Canyon - South of Sarmish on the other side of the mountain
Desert Town - North of Qalyut

This is the location of the Warband suggestions on the map: 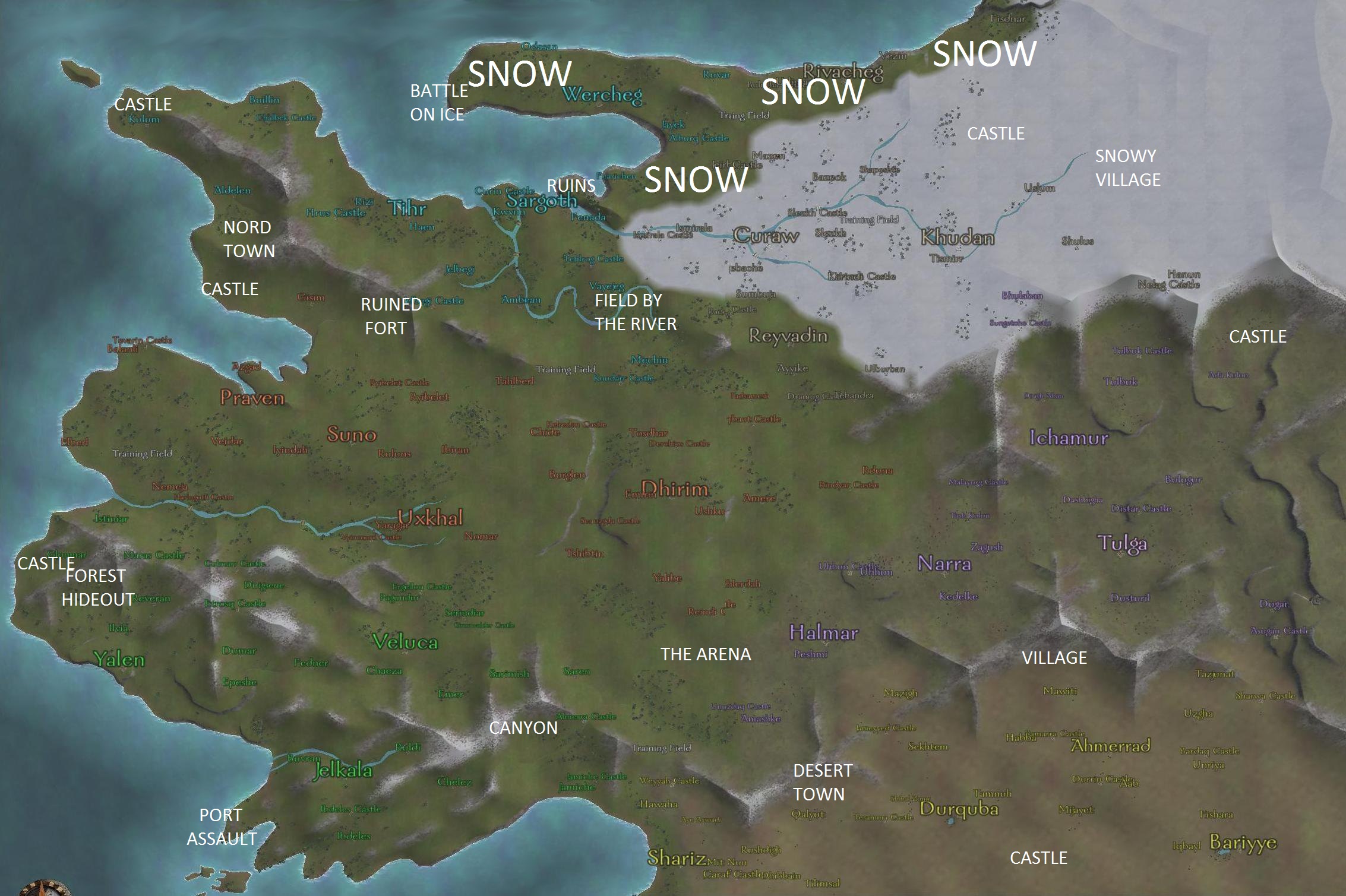 1) Add more snow on the map: Russia and North Sweden -> While only the scandiavian part of Sweden should have snow, Russia should be covered in snow. The snow files are in the engine I believe because there are multiplayer maps with snow and Warband who shares the same engine has snow.

2) Steppe region on the map: Crimean Khanate -> Similary to Warband, it would be nice if the Khanate will have a steppe region under them, this will allow you to fight singleplayer battles in steppe regions.

3) 4 Towns for Every city and 1 town for every castle -> While real-life had no such arbitrary rules, it would be nice to have some symmetry in With Fire and Sword. In some areas such as Ukraine are very concentrated while in other areas they are very scarce. Some cities like Vybrog, Novogorod or Cherkaask have no towns next to them.

4) Add more Castles -> There are some areas with just plain fields, while it was true to history that some areas had a higher concentration of towns and castles than others, this can increase balance and enjoyment in the game, to have more things to do and more places to visit, attack or defend. Some castles could be in Causas and north of Caucas, one can be north of Tver on the other side of the river, one can be between and Pskov and Tver, 2 castles can be south-east of Polotsk in the Polish plains and one castle can be north of Reval and west of Vyborg.

5) Green or Red color for the Main Quests -> The main quests can easily be confused with the rest of the quests because there is no way to differentiate between them, making the main quests a different color should solve this.

6) Native Multiplayer Maps as places in singleplayer -> Add the locations from multiplayer battles as ruins on the map to make it possible to visit those ruins just to see them, or possibly add some easter eggs or mission events there, and in case a battle is engaged next to those ruins the battle will be fought there similary to how battles are fought in towns. Of course in ruins there are no peasants to help or oppose you.

The locations are displayed on the map: Old Castle, Arena, Fields, Hill Road, Steppe Farmstead, Marketplace, Forest Skirt (sorry for the typo in the map), Road in the Forest, Tatar Town, Fortified Town, Trenches. Locations like Marketplace can take the form of an abbandoned city.

This is the location of the WFAS suggestions on the map: 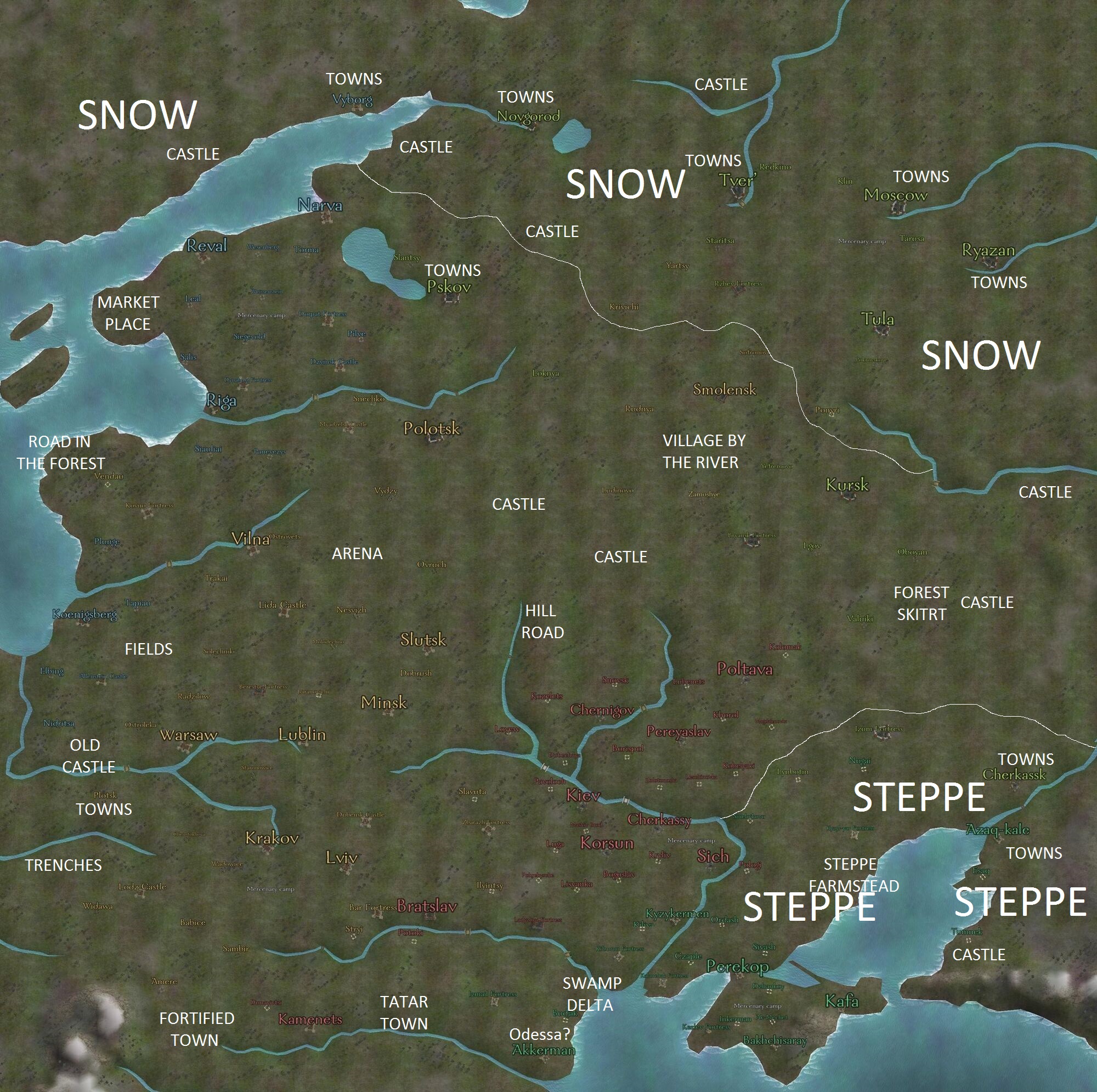 I don't have high hopes, considering the games are long out of development and Bannerlord is comming soon, but at least they are here for those who like them to see.
Last edited: Feb 3, 2020

I'm pretty sure they are done. Nothing stopping you from making mods, but who is even going to play this game after Bannerlord comes out? I haven't played Warband seriously for a long time because I lost interest years ago.
Last edited: Feb 18, 2020

Pretty ambitious but they should focus on Bannerlord, the Magnum Opus of Taleworlds. Intresting ideas nonetheless
You must log in or register to reply here.

How to mod a castle into a town

Tired of constant battles on the same maps!