Feedback and suggestions concerning Party and Army management in Bannerlord

Greetings, new member of the community here. Recently bought Bannerlord and played for roughly 80 hours on 1.7.2 and 1.8 beta. I'd like to share my thoughts with you and get a discussion going.

The party screen could definitely use filters.

The unordered list is just not pleasant to look at and has to be ordered manually. The individual entries in the list also seem rather big and take up much space which isn't a problem in and of itself, just when paired with no ability to filter and sort quickly. A party at size 250 with three dozen different units of various tiers and factions takes a while to scroll through and much longer to sort manually for a good overview. The ability to lock entries in place while sorting would make filtering and sorting easy and effective. Not just for your own party but for prisoners and garrisons too.

Currently, i can't be bothered to sort or manage after early game. It's just dump garrison, dump prisoners, grab whatever soldiers i can because it's just that much of a headache to scroll, read and handpick stuff out of piles of unsorted soldiers.
Onto formations.

I only played a couple hundred hours in Warband years ago but i remember the old party screen formation assignments with custom named formations and the ability to assign specific units to formations in the party screen. I understand this feature has been more or less recently removed from Bannerlord before i started playing it in favor of the pre-battle deployment phase aka OoB.
The Order of Battle system certainly has potential. It really needs some work though. Some rough spots i've observed while playing are:
- Placement and division of units is messed up in sieges

Issue: Archer units split up and take positions on the walls, as they arguably should do but it's outside of player control. Infantry groups placed at chokepoints like breaches in the wall and behind the gate house randomly shuffle to different chokepoints making the pre-battle planning pointless. Formations that are slightly too large to fit on walls pour over the sides of them too. In general formations seem to work much better on the open field and much less so during sieges / on walls.

Suggestion:Let us assign units to wall sections and siege engines directly, bypassing formations, and prevent overriding commands for melee-infantry formations during the start of sieges without additional player-input needed like "hold position" or "move to position" to override the override. Don't you too feel like the T4 infantry manning the Catapult would be of better use on the frontline replacing the recruits? More on a piece of UI, that already exists ingame, i feel is perfect for the task of assigning initial defenders and crews for walls and siege engines at the end of this post.
- Preferences don't offer enough options and have mixed results

Issue: Can't seperate cavalry by lance/spear, archers by bow/crossbow. Can't seperate units by tier to seperate elite from novice formations and anything in between. Can't group companions.

Splitting up infantry into throwing weapon skirmishers or two-handed linebreakers next to the main-line infantry is very hard with sliders and preferences. Oftentimes not all infantry with throwing weapons is moved into the skirmish line or not all two-handers are moved into the shocktrooper line before the game decides to add units with non-preferenced equipment. It's frustrating to fiddle around with it and zoom in to the lines to check if the sliders assigned units correctly. 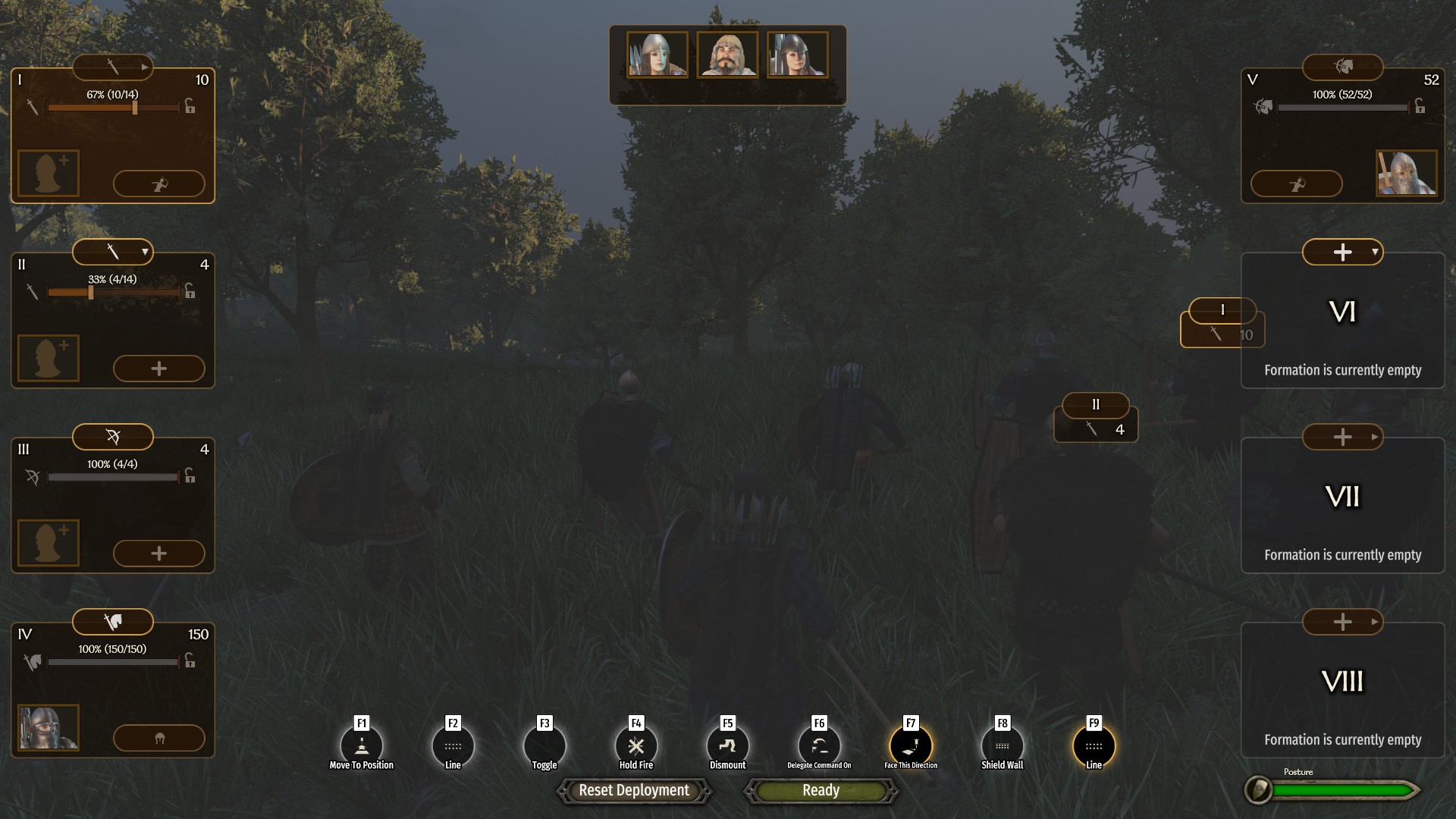 Suggestions: Add new preferences which are specific for cavalry and archer formations. Lance/ Spear and Bow/ Crossbow (more? add to it if you have ideas). Preferences should also take greater care to only select units with the specified equipment instead of allowing some leeway for mixed formations. Alternatively, an additional way to definitively fine tune / micro-manage formation composition would be much appreciated. Again, more on the piece of UI that could make that possible and already exists in the game at the end of the post.

- No fine control over what units are moved between formations

Issue: Let's say some of your knights or horse-archers are unhorsed, instead of having them run after your cavalry up and down the battlefield when they are set to "follow" you or ordered to "move to position" as it is right now, the option to move them to infantry or archer formations would be awesome. It's currently not possible or very unreliable with the "move units to formation" option and sliders as they seem to randomly assign your large portion of mounted troops long before assigning the smaller one of dismounted ones.

Suggestion: The ability to select a specific unit type (Infantry, Archer, Cavalry) from a mixed group and only move soldiers from this group from one formation to another. Instead of one slider for the entire formation and all types of units, up to three sliders for the different possible types of units in a formation (Infantry, Archer, Cavalry). This would perfectly work for dismounted knights and dismounted horse archers as they count as "infantry" and "archers" once dismounted. Additionally, the piece of UI that already exists ingame, which i keep bringing up, could make moving specific units from formation to formation easier albeit not ones like dismounted knights or horse archers.
Now finally, i hear you ask: "How would you assign units to walls and siege engines or assign specific units to formations in the pre-battle OoB? How would you additionally like to move specific units between formations mid-battle with absolute precision? 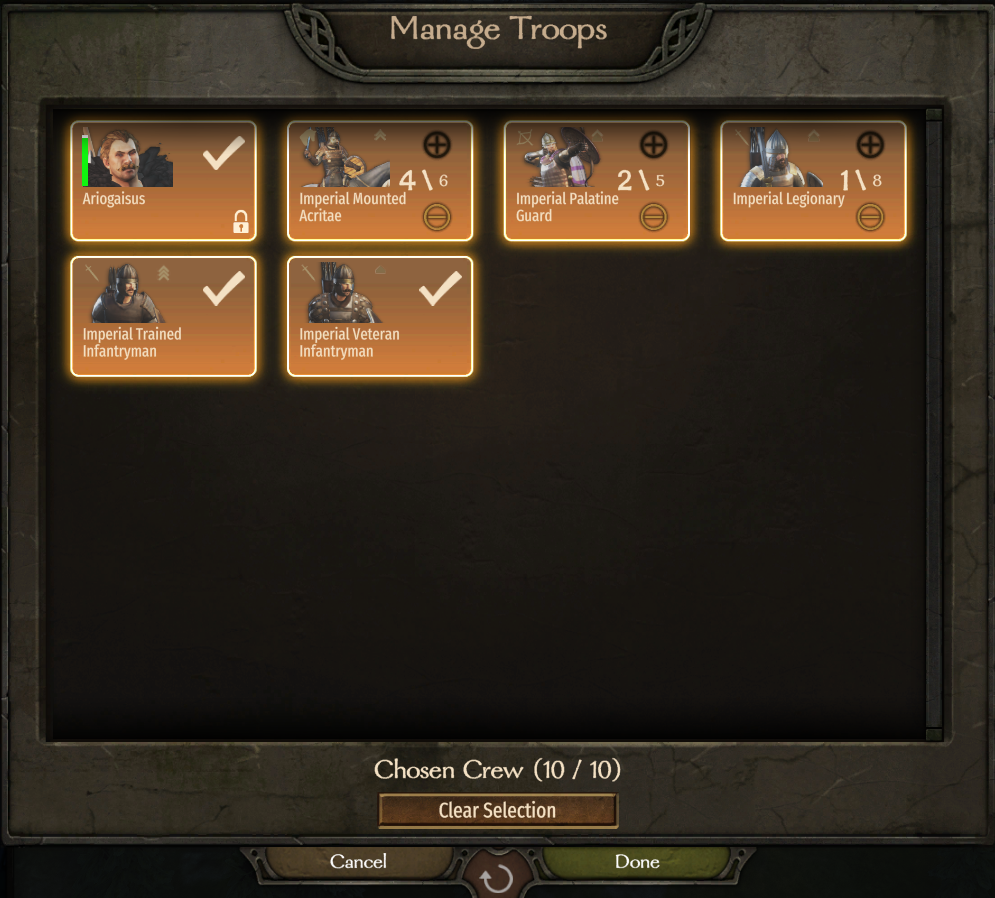 Yes, this is kind of a joke but this is seriously a good piece of UI, the best i could find ingame, that could be utilised / reshaped / adjusted to serve a purpose in OoB / pre-battle deployment to make it more micro-friendly and maybe help mid-battle formation changes too. It's certainly better than sliders only, easy to use and precise. Some tweaking like larger increments for selection would be ideal as this management window for missions does 1, 5 or all depending on lmb, ctrl+lmb or shift + lmb on the "plus" icons. Larger increments would serve larger parties / battles better. Filter options (because i love filtered lists obviously) and/or categories with seperator lines in this window would be very good too for overview and quick decision making. Even though this vanilla window isn't perfect and a little bulky and unsorted as of now, see it as an example of what a management window for various assignments in the OoB could look like.
I hope this post can be regarded as wholly constructive. Thanks for reading, looking forward to discussing with you and hearing your thoughts and feedback.

+1
While the new OoB is pretty and definitely needed (now nobody's complaining about the broken tactics perk haha), I don't see why they removed the previous assignment of formations in the party screen, seeing as most singleplayer players were pleased with its utility to seperate companions, create specialist/auxilliary units (for that Empire roleplay of sending in Varangians to do their dirty work lol), and train recruits without your veterans stealing looters from them.

The Order of Battle preference checks (throwing weapons, heavy armours, etc.) need to be far more strict to be useful and should only include troops who don't fit that criteria when there's no troops left who do, e.g. If I select a preference for heavy armour, it should add troops in descending order of total armour rating, or at least start with troops with the highest tier of body armour (to keep it more lightweight). Additional preference buttons would be great too, such as 'Hero', '2H weapon', 'crossbow', 'lance/Pike' (or maybe just a preference for longer polearms within the current polearms preference? Would make it easier to create a pike formation or a shock cavalry formation on the fly, and only needs to look for the weapon tags for 'can couch' and 'can brace' to distinguish them). Also, including Tier check boxes onto the OoB formation UI would make it a lot easier to split up veterans and recruits in a way which forgoes a lot of the previously mentioned tags, and would be a far better utility than the 'heavy armours' preference.

Also the scatter formation is currently redundant with loose formation... how about a wedge formation instead (inverse skein) for enveloping a narrower formation or concentrating archer fire without having to create two seperate groups? Edit - it'd probably do best categorised as a 'loose' formation rather than a 'tight' formation (like skein) and then reclassify line formation as 'tight', to balance the tactics lvl25 perks and reflect the common usage of each formation.
Last edited: Jul 7, 2022
You must log in or register to reply here.