Resolved Fatal error while loading save file from menu

Summary:
How to Reproduce: Start game, from menu either press continue campaign or Load save from saved games, game will crash with error on loading screen. I've tried 3 different saves. One was my save file and the other two were auto saves.
After the game crashes the BannerlordLauncher stays active but only visible in task manager and Steam lib marks Bannerlord as "Running"
Have you used cheats and if so which: No
Scene Name (if related):
Media (Screenshots & Video): 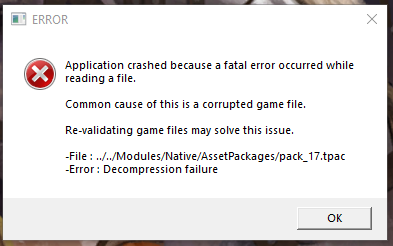 If you crash with a decompression failure problem, you can try the workaround below to fix it:

Thank you, worked like a charm, after deleting the file mentioned in the error, steam integrity check found 12 missing file to redownload and the game loaded the save nicely.

Thanks for the update, have fun playing!
You must log in or register to reply here.

Resolved Application crashed because a fatal error occurred while reading a file.