Face off Gaming is proud host the first FOGBP Tournament. We hope to provide an enjoyable experience for all players to bring together the Bannerlord community with this tournament. Each player will submit a picture of their most beautiful(or not) bannerlord face in this thread. The face will then be judged by three different judges whose names will not be disclosed.

Rules and Regulations
In order to create a fair and balanced playing experience these rules and regulations have been set to properly and quickly organize the FOGBPT.

General Rules
1. Only one face may be submitted. You can post pictures of different angles, but they must clearly be of the same face.
2. Along with your face, please submit your official name, and a short bio about your inspiration and/or lore behind the face. Feel free to go as in-depth as desired
3. You have two weeks to submit your face to the FOGBPT. The winner will officially be decided by May 7
4. The winner of the FOGBPT will be rewarded with a grand prize of $20.00
5. Submissions MUST be submitted on Tuesdays, Fridays, and Saturdays at 6pm EST
6. Rule 5 is not a real rule
7. Entries will be judged on a three category system as follows: Face Structure, Creativity, and Artistic Expression

If you do not like these rules, please do not make an entry. By entering into this event you accept the above rules

Here is an example of a submission

Name: Alejanbro
Lore: A seasoned hunter of troglodytes from a southern kingdom come to sell his skills as a mercenary to the highest bidder. A battle with a particularly nasty trog left him blind in one eye. 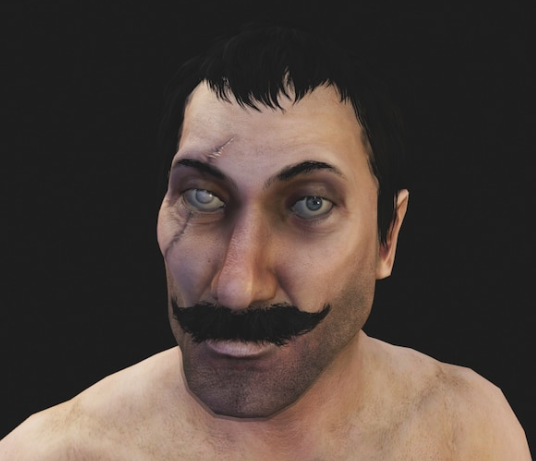 Good luck and have fun. May the best faces win!

Lore: LaFonda is a drifter who has much trouble finding a suitable kingdom to accept him for who he is. He moves from village to village, preparing shows for the village people. This picture was after one of his recent shows at Sargot, where he stunned the crowd with a special, spicy tribal dance. A man a few words, LaFonda drifts on, hoping to find his place in this harsh world.​ 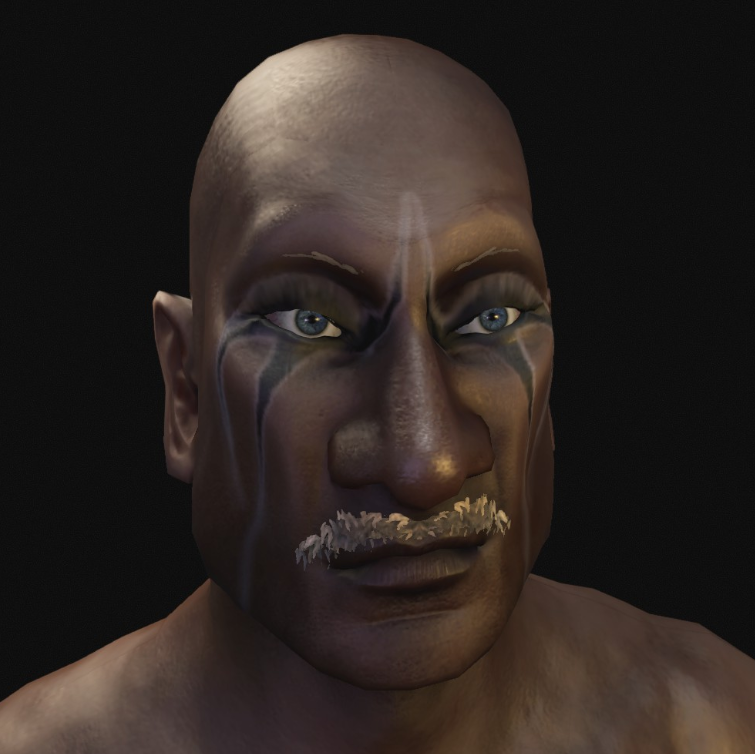 I submit to you my creation of Ron Jeremus. He is Slaying Wenches left and right with his very LARGE great lance, if you get my drift (winky face)
Everyone just wants to learn Ron Jeremus's ONE TRICK that makes all of the wenches fawn over him like a fine bar of Thamskene STEEL.
Even the royal kings have asked for his secret formulas and potions so they can take their puny short swords and FORGE them into the biggest thrusting lances in all of the land.

Ron Jeremus is also secretly one of the best piano players in the entire kingdom and a well known actor in popular plays, including "The Saints of the Boondocks", "Super Mario Brothers of the Round Table", "Excuse me fine sire, hast thou seen my lance?" and "Your Queen calls me King now." 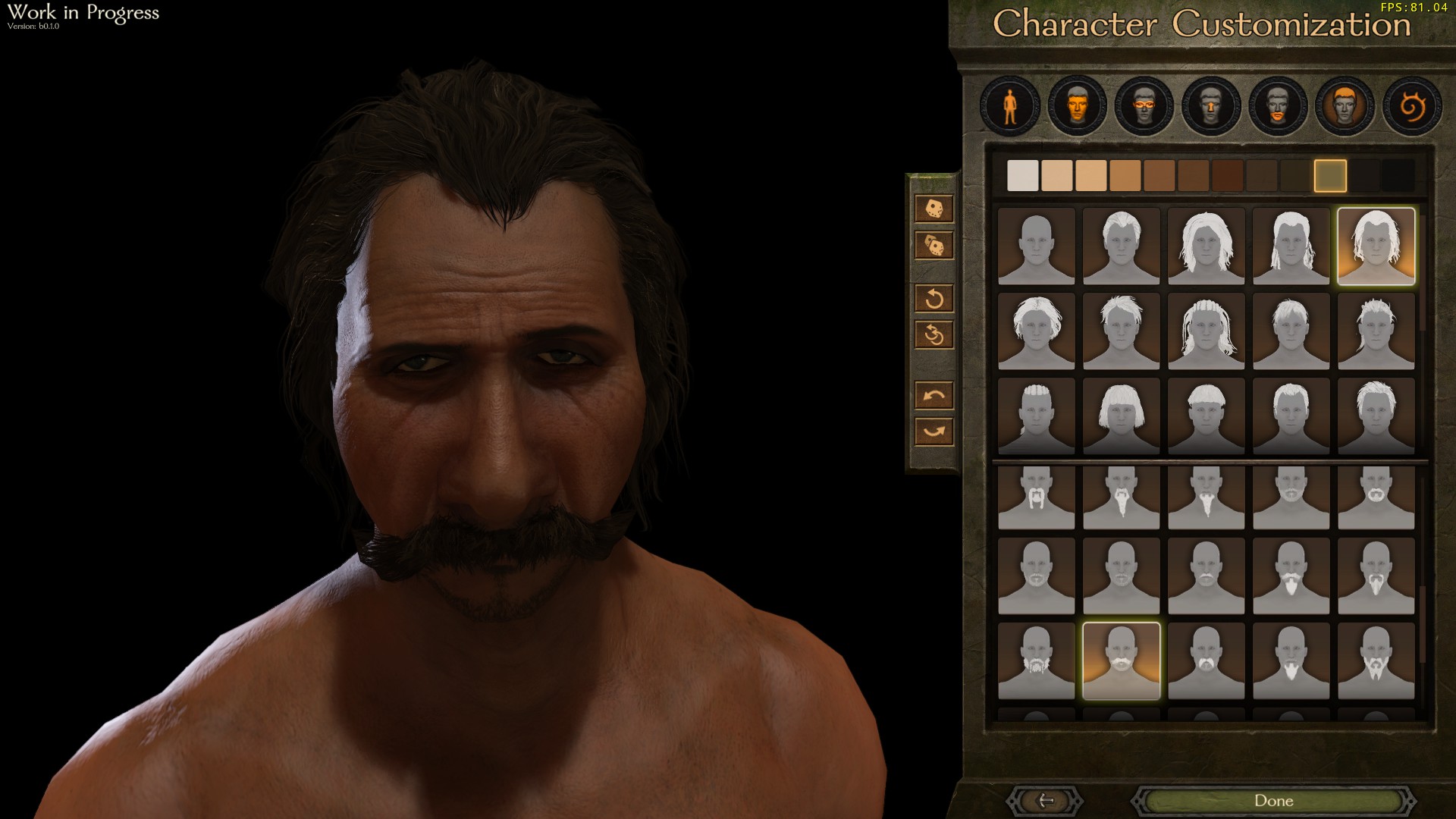 Juve is a small, sad man with a surprisingly high pitched voice and tiny little short legs. He has a habit of smoking from his pipe at least twoscore daily, which exasperates his difficulty with running any distances. His only skill is with a bow, as he is frail and prefers to attack from a distance. A distant cousin of famed theater troupe member Sean Pennington, he usually scrapes by unemployed on petty cash donated by his wealthy cousin, but sometimes accepts requests for assassination and hunting jobs.

He also drinks far too much grog. 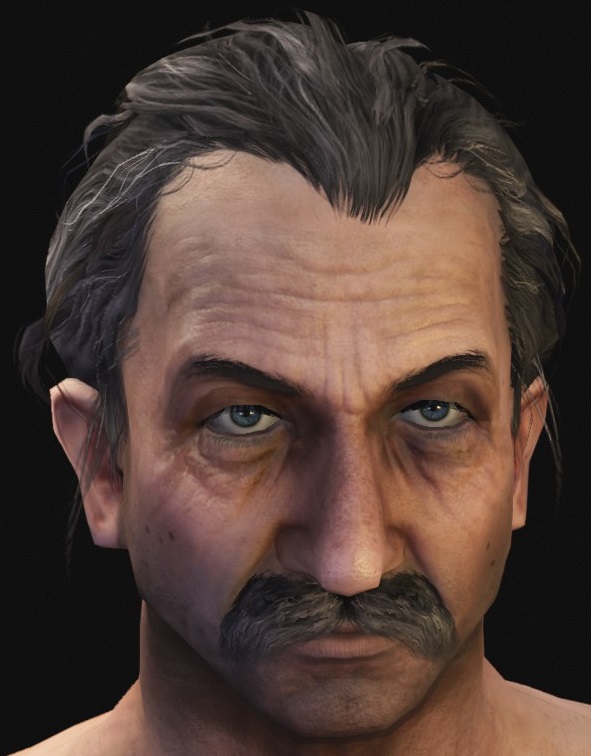 Maddleliah​
Maddleliah comes from a rich merchant family in Aserai. She was raised by her father, because her mother died bringing her into this world. As a little girl she was already making hearts of great warriors melt, for her charm and grace was too much to handle for every man. People say that when she walks, it seems as if she's dancing with angels. However, she the charming little creature only beasue her father wished her so, but she was a brawny little girl. Nevertheless she complied with her father's wishes and attented feasts with him and studied numers, beacuse her father wished her to not only marry well, but also for her to be able to turn a profit herself if a need would arise. At the age of 13 she started sneaking out every night to pracitce sword fighting with her friend, Firello, who was a son of a hunter, and his way with a sword was really impressive. So they practiced together, evey night. At day she was studying number, and during the nights she was fencing with her friend, untill her father died, she loved the poor soul dearly, and his death made her abondon her way of a sword and put more attention to studying and becoming a great engineer of her time, she still spent a lot of time with her friend, who was like a brother to her.
When she was almost 20 summers old, Firello decided to to join aserai army as an archer. Maddleliah wanted to stop him, but it was all in vain, he would never give up fighting for his country especially against the Kuzait filth. After few months she heard that Firello is now a prisoner of war, and that he is being held captive in a city of Odokh. She wanted to pay ransom and free her friend, but she received a reply that they would not ransom him, at that moment she realised she had to do something. So she decided to form an army of mercenaries from the fortune her father left her, and she would ride and siege Odokh and either free her friend or burn the whole city. She rode leading an army of 400 men, and when she reached Odokh she started laying siege to the city. She knew a lot of about engineering, so she ordered her men to start building siege camp, and in the meantime she demanded to speak with the man in charge of Odokh, he refused to even meet her, because he heard about her beauty and charm, and decided not to take any chances, for he was afraid that he would became her slave hoping that one day she would marry him.
And now she knew that she has to destroy the city before the Kuzait reinforcments arrive. She knew she had time, beacuse last she heard Kuzait main forces were leading offensive against Sturgians in the north. After the camp was ready, she ordered her men to start bulilding trebuchets and balistas, she had all the plans and overlooked every single construction. She gave the Kuzaits one more chance to free Firello, but they would not. She gave orders to put trebuchets in shooting distance, she double checked her calculations and when she was sure that everything is in the right place, she ordered the destruction of the city. And so the stone projectiles started flying. The walls were breached pretty fast, and so her army made for the garrison, a lot of blood was spilled that day, and the city surrendered when it was already on its knees. Her men searched for Firello, but found only parts of his body, Kuzaits dismembered him. She only took Firello's penis to keep as a souvenir, and gave orders to destroy every inch of the city, kill every person rape every woman, and take every child prisoner to sell them into slavery. She took only a hanful of guards and headed home. Now that she was friendless and without any family, she decided to spent the rest of her life inventing new machines of war, but truthfully she just wanted to await her death in peace.

Born in Garengolia, former legionary from the wars against Battania now retired, he lives as a jester taken to drink. His catchy laugh, his incomprehensible jokes made him popular around Ortysia with the nickname "the Chuckles". He nowadays tell jokes for money or drink in a well-known tavern in Zeonica during the summer season, and he also entertains parties and feasts in different imperial cities. People rumour that he has the blessing of Garios himself because the latter loves his jokes and that is why he has not yet turned up dead in the stream.

This is Mongo. Famous in Sturgia for his handsome looks, and sheer lack of wits.

We are now accepting entries regardless of nationality. Good luck!

This is Mongo. Famous in Sturgia for his handsome looks, and sheer lack of wits.
Click to expand...

vinny vinny pooh, where are you? 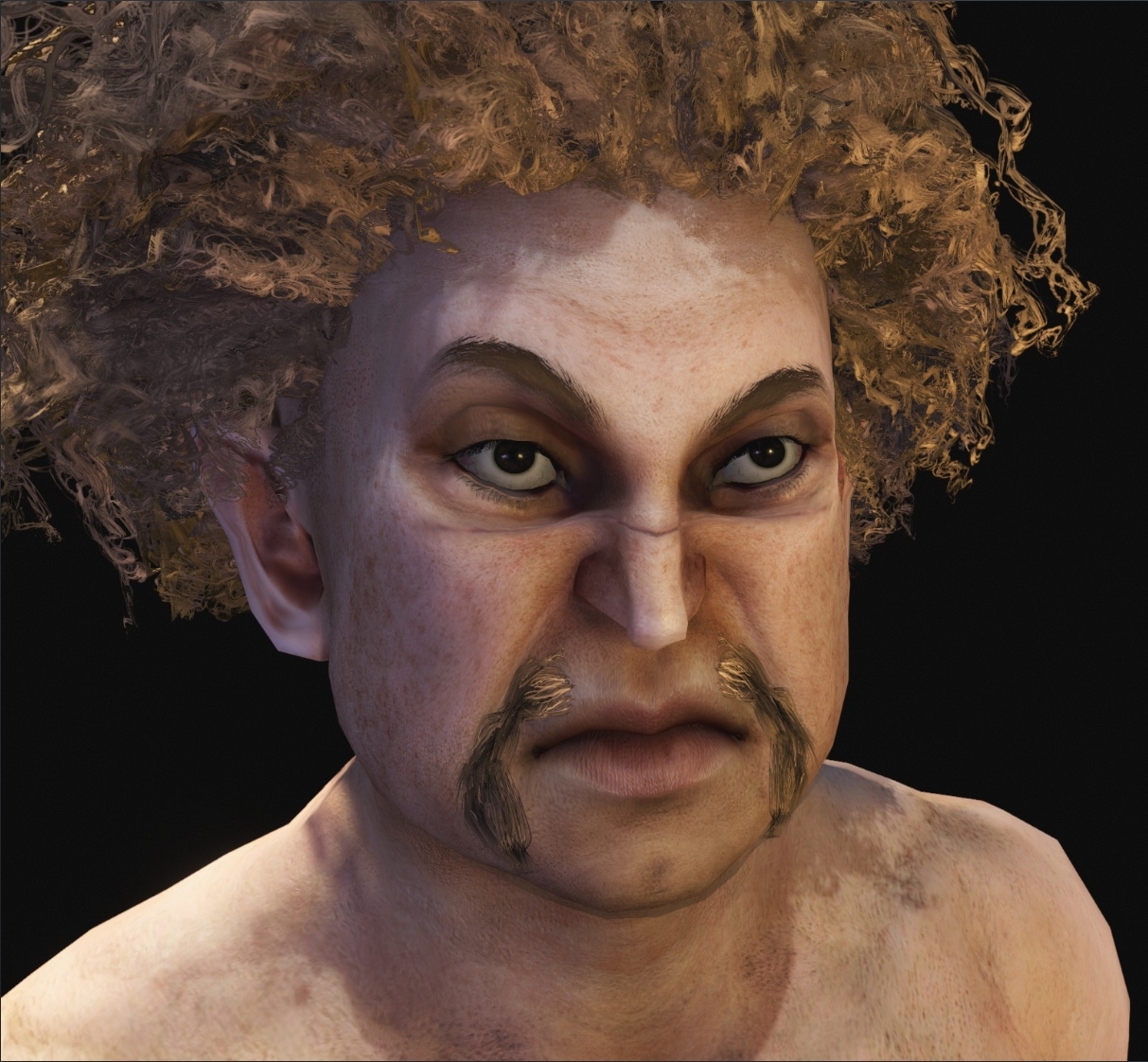 Born in Garengolia, former legionary from the wars against Battania now retired, he lives as a jester taken to drink. His catchy laugh, his incomprehensible jokes made him popular around Ortysia with the nickname "the Chuckles". He nowadays tell jokes for money or drink in a well-known tavern in Zeonica during the summer season, and he also entertains parties and feasts in different imperial cities. People rumour that he has the blessing of Garios himself because the latter loves his jokes and that is why he has not yet turned up dead in the stream.

I'd be his friend

The Mongchild.
A boy found in the woods by a roving warband, now grown up to be one of the most cruel manhunters. 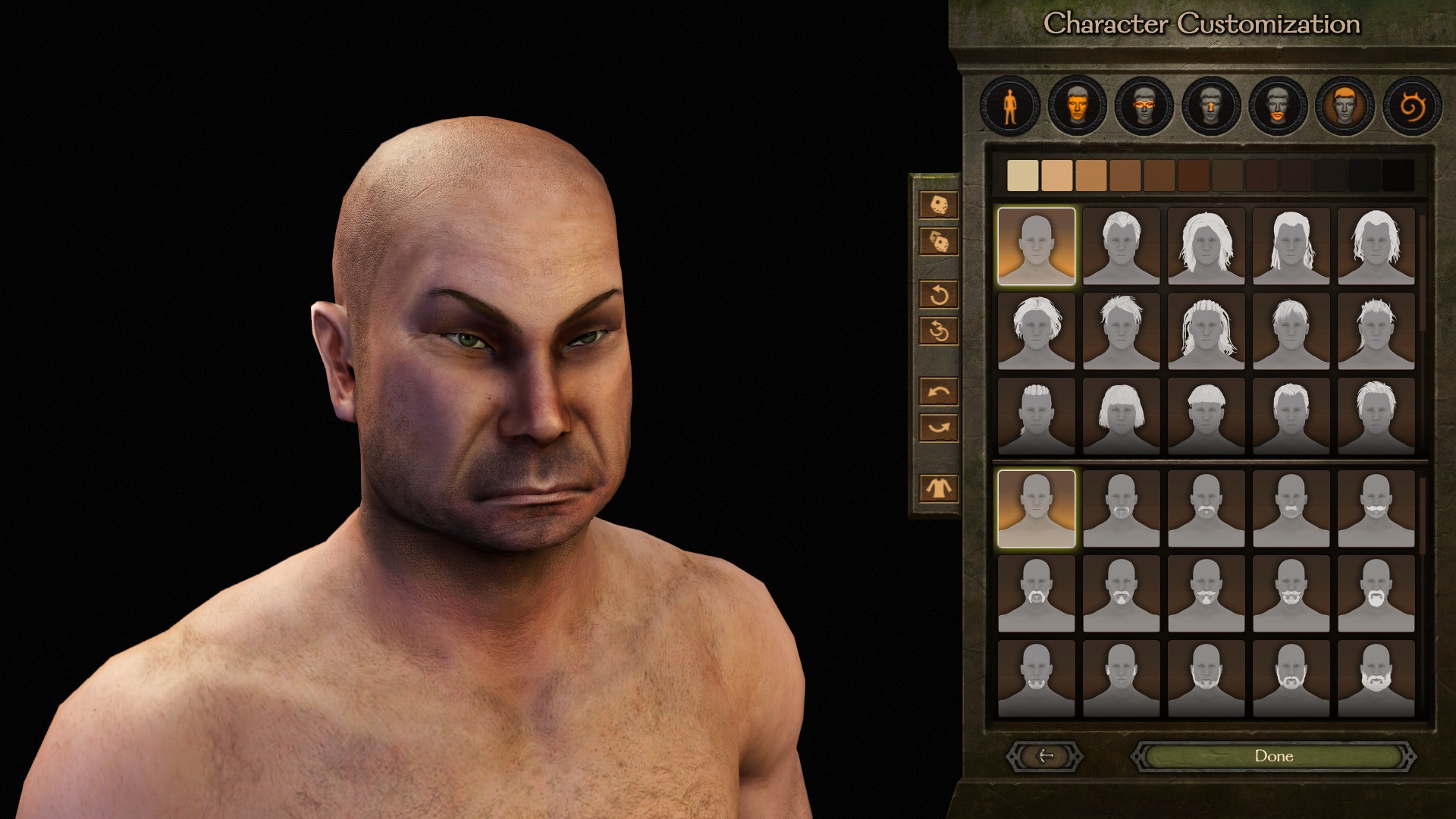 ****ing hell and I thought Warband faces were bad

Bopar the Challenged
Bopar was raised in the local village sewage waterway. Although his upbringing was difficult he found simple pleasures in life such as bird watching, and utilizing frozen fecal matter to throw at unsuspecting bystanders in the middle of mainstreet.
Bopar has been known to rummage through locally disposed garbage in search of the prized used female sanitary products, a delicacy some say has been to known to the great kings of the east for centuries.​ 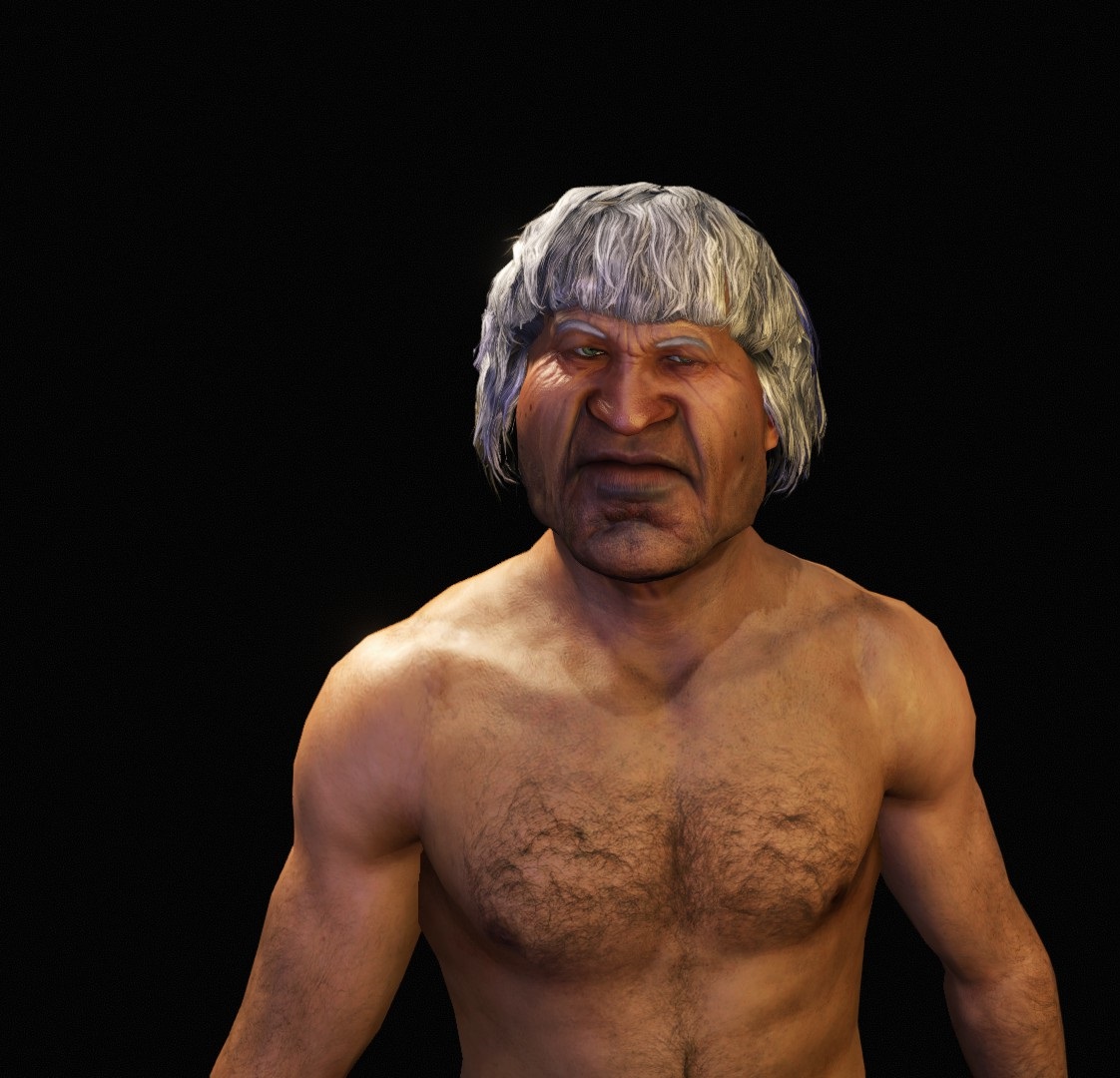 Born in the slums of South Bronx Upon Tyne, Jamalius started his life as a thief early in life. Jamalius often recollects of the first time he robbed the local swine farmer for all of the pig sludge for his daily hygienic bathing "i remember it like it was yesterday, and i'd do it again" jamal would often spout in humour.
Crime is his name of the game, and nobody can stand in his way.​ 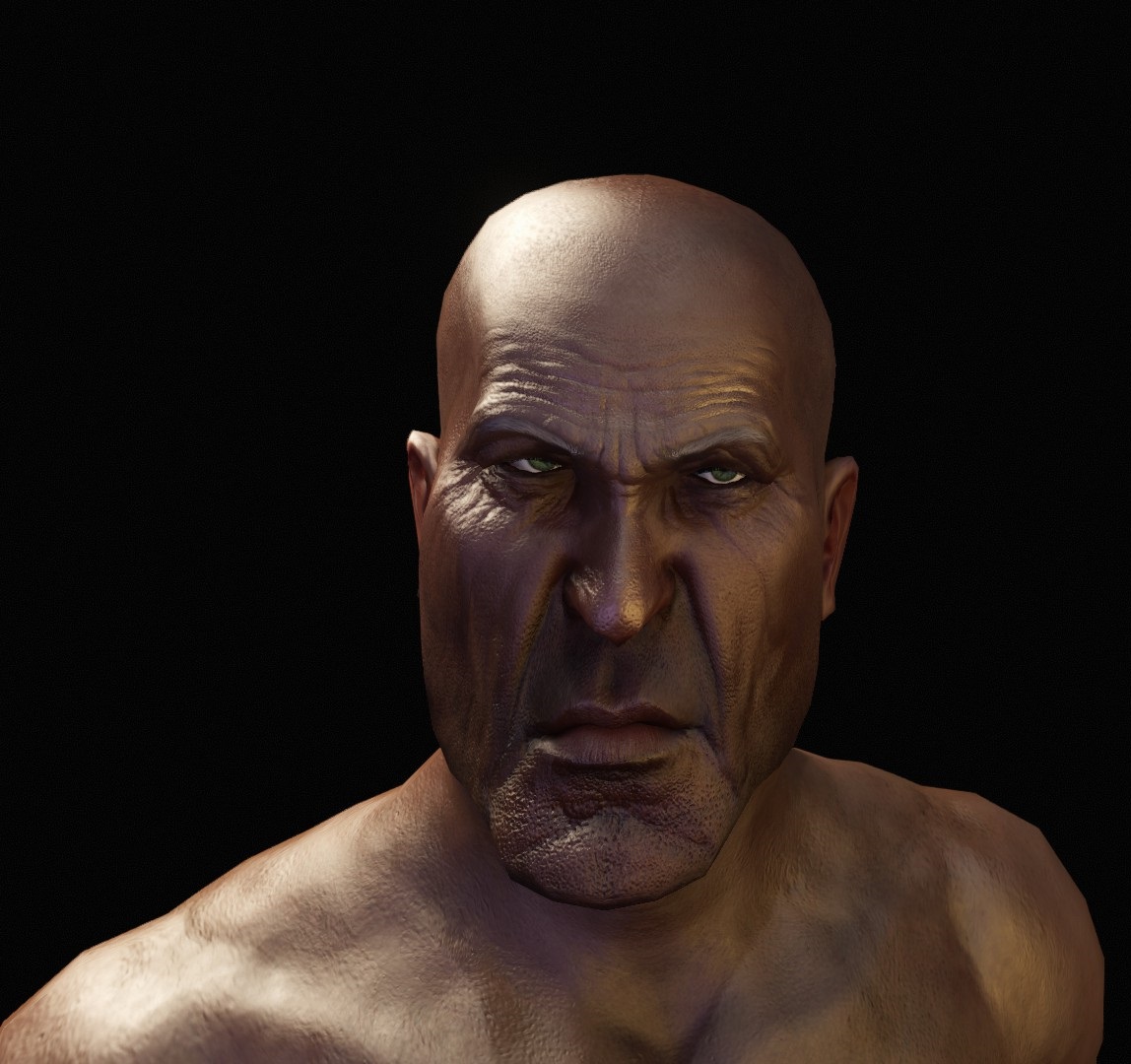