this is usefull for renown, but in my experience renown is not really a problem, it is making money untill you can afford the workshops and stuff like that. if you are alone you cannot really carry that much unless you have horses with you, and looters will escape very quickly so you cannot really ransom them very easy.
i think right now there are more important exploits to worry about in the game.

still, thanks for sharing.

why exploit? dont forget a good bow, thats not early game and clan tier 3 and above renown is no longer so important

My opinion on this matter is that if you want to put in the effort to do this than have fun.^^

Ghostwish said:
why exploit? dont forget a good bow, thats not early game and clan tier 3 and above renown is no longer so important

My opinion on this matter is that if you want to put in the effort to do this than have fun.^^
Click to expand...

Actually my formula was very generous, it is possible to just have low-mid bow. If you maintain the right distance the rocks hardly ever hit you. Just try to aim for the head/neck. 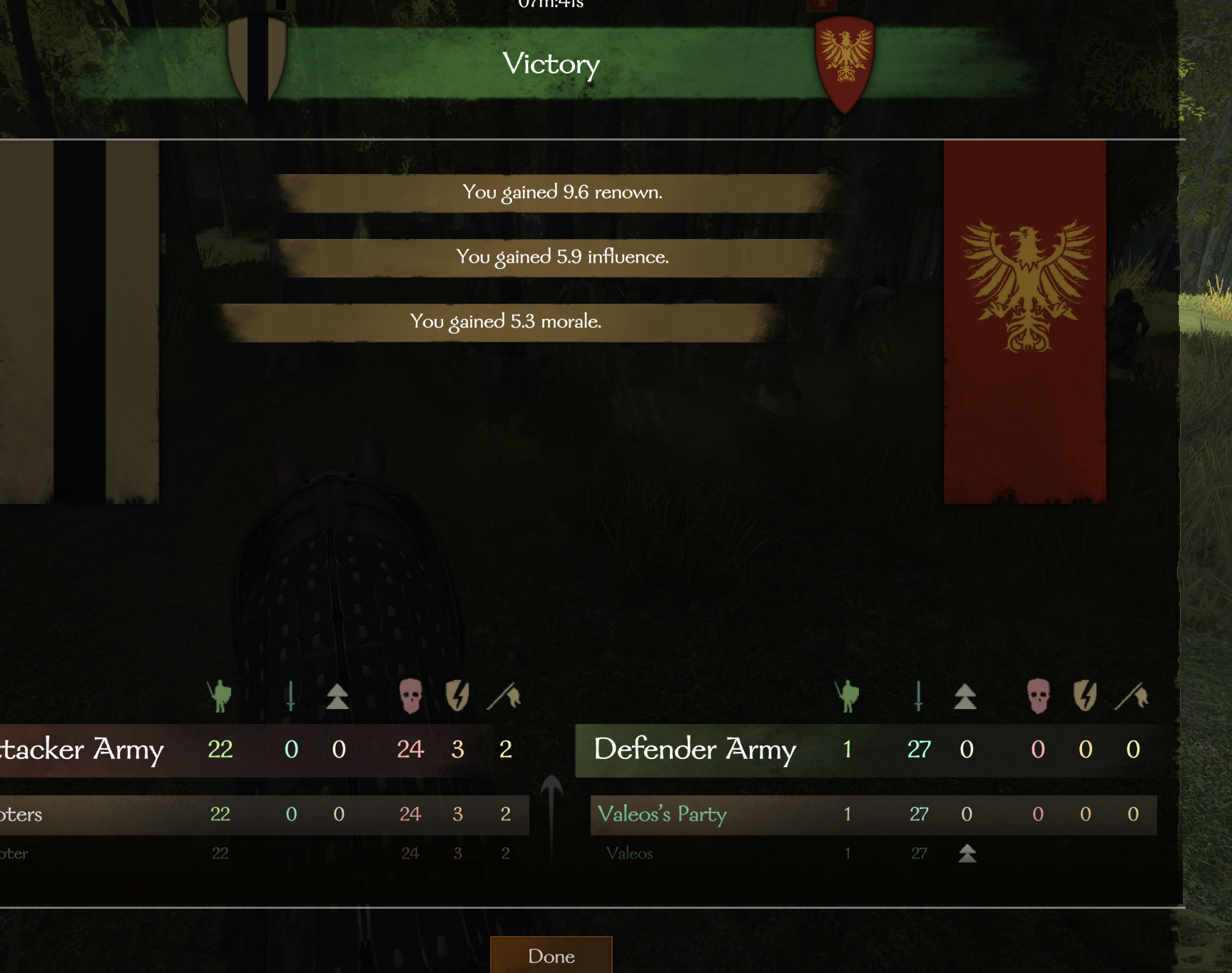 That's what I do in early game, it's more or less a tactics or strategy things given looter are the favorites punching bag of everyone. How's that's an exploit?

At least i need to buy better horse, bow and arrows for it compared to the naked guy.

I mean, this was my solution to killing them solo when the game first starts when they had sniper scopes for their rocks.
With out missing a shot, it would take me something like 5 minutes per battle to kill 10-15 looters. Because of the constant Ride out of distance. Shoot. Move. Stop. Aim. Repeat.

Until I had enough gold to get some basic gear, a companion and some horses.

If a player really wants to spend 15 minutes a battle solo sniping looters I don't really see the issue.

If you nerf looter renown then it will force players to fight harder bandits before they may be ready (Every one plays at different skill levels) and less experienced players will struggle to advance. Where as people who are going to exploit probably already have mods or cheats activated any way.

LEEKING2005 said:
That's what I do in early game, it's more or less a tactics or strategy things given looter are the favorites punching bag of everyone. How's that's an exploit?

At least i need to buy better horse, bow and arrows for it compared to the naked guy.
Click to expand...

I feel like it's too one dimensional that is the optimum way to "farm/grind" some renown and items early game. Maybe looter being the only tier 1 enemy, with the same old rocks is the problem. Just add some more tier 1 enemies, and varied equipment and troop types.

Actually see the screenshot above, only took 7 mins to farm a 1vs 51 looter

I did that for raising my archery and riding skill, it quickly get bored eventually (Especially southern empire snowballing to 8k while i bullying those lowly punching bag)

That's not true, because of the morale system they just routed. Less work, high renown.

Yes. I see the Screenshot. You killed 24, wounded 3, 2 escaped. It took 7 minutes with a bow and a lance. I took 5 minutes with ONLY a starter bow.

Thank you for exemplifying my point that players vary greatly in skill. (and gear choices) and less skilled players should not be punished because more skilled players, or players will to fight 51 looters at a time (I've personally never fought more than 20 solo because I don't save scum, so it's a risk for me at my skill level).

I am for more varied looter types. I think like the other bandits looters should also have some other unit types. Maybe a couple Looter Leaders on horses with slightly better gear, or one or two with a bow. But over all the looter is meant to the the MMO Giant Rat. We are supposed to murdered them until we can fight actual enemies.

Most players, in my experience, do not just exploit or grind the easiest fodder. They move on because looters are boring. They are definitely people like yourself, who will gladly circle looters to min/max but more common is the people eager to have bigger better battles, after the initial entry level traditional looter slaying.

TheWitchIzalith said:
Yes. I see the Screenshot. You killed 24, wounded 3, 2 escaped. It took 7 minutes with a bow and a lance. I took 5 minutes with ONLY a starter bow.
Click to expand...

Hang on a second, let's get the facts right first. That screenshot was a 1 vs 51.
24 kills, 3 escaped, 2 routed, and 22 still alive (green). They all routed due to low morale but the scoreboard just showed 2 for some reason, maybe a bug

Well, if you want to fix "they escape due to low morale issue" then people will complaint about the realistic. To be fair though they should not run away and need you to spend 15 minutes though (in the sense that you don't get free stuff), it must be a bug/bad design.

15 minutes hand played with "few" hit KO risk (assumed you had no equipment) to earn 9 renown should be reasonable, you don't see they nerf the naked two hand sword instead they cheers for it. It's 40 per hours and you need to take risk and manual played, then people will complaint progressing too slow. XD

PS: if you use two handed sword it probably will be much quicker, but I'm the brainy type so I want to balance the risk and reward balance so if you are muscle memory type it's much faster with two handed sword.
Last edited: Apr 11, 2020

Yes, but you did not kill all of the 51. So 1vs51 is slightly misleading, and you are also ignoring the main segment of my argument. If you killed all 51 the renown would certainly be higher, and would have taken 15 ish minutes based on the 7 it took to kill those 27.

A player who will min/max or "Exploit" as you call it. Will find ways to do it regardless. Since this is a single player aspect, it is literally up to the player. If they want to play that way, they will find a way.

There is no need to arbitrarily make the game harder for people who play "regular" and will just farm looters at the very start, to get some gear, companions and a starter army.

From watching youtubers, friends, and my own experience, most players will not sit there and charge groups of 50 looters. The game also spawns parties based on your party size (if it works the same in warband and appears to) thus finding those 50+ looter parts will take time.

When I play solo to start up (and I've restarted entirely with every patch) the looter packs sit on average from 5-18. With some jumping into the low 20s. I've yet to see a 50 looter pack solo, which means it's probably not frequent enough to warrant hunting down, and more RNG based, unless you kite 2 20 man packs (which again most players will not do unless they wish to min/max and kiting them together will also take time).

you know, this has always been a thing, this is how you win unwinnable battles in the beginning of the game, how else do you fight sea raiders xD

Dragoony said:
you know, this has always been a thing, this is how you win unwinnable battles in the beginning of the game, how else do you fight sea raiders xD
Click to expand...

Like a man, by riding circles around them, then gathering up their javalins and waiting until they go to attack to throw it point blank.

Game is early access, and no it's not an exploit it's a tactic. It's up to you if you want to put in the extra time to "farm" renown.
But renown is easy to get even with troops and just auto-resolve.

A good archer on a horse against throw rocking riff-raff? Why are you surprised the horse archer would win most of the time?

It's incredible how peole find so many ways to ruin their game)))
You must log in or register to reply here.

Beta Patch 1.5.6 Single Player Seige, archer behavior (is this a bug? Or "as designed"?)

In Progress Bug / exploit during a siege