A while back I noticed one of my children and a child of one of my brothers had the same name (Lulya). They were born consecutively. Amusing and a little confusing, although as they grew I could see hair colors were a bit different. However...

The first Lulya came to age. I provided the shoulder pads., bow, & arrows (possibly other stuff, not sure). She came of age with a Nahasawi horse. I also provided her with civilian outfit of hat & dress (short tunic), The first Lulya had her Battle outfit Nahasawi lamed a while back, but since she doesn't actually have the skill to ride it I couldn't move her civilian Nahasawi to the battle position & since she couldn't use war horses yet, I let her keep the lame one as her battle outfit horse. Just now I found her Nahasawi died (probably lucky she didn't), so I JUST replaced it with a Steppe horse. Then I noticed the 2nd Lulya just came of age, so I brought her to the party. I went to upgrade her equipment and found EVERYTHING of the equipment matches the first Lulya. Same shoulders (which family members usually don't start with), Same bow & arrow (which, again, family member generally don't start with. Same Steppe horse for battle outfit with Nahasawi civilian outfit. Same regular starter gear as the other one. Incidentally, I noticed I could upgrade the bow on the original to a cracked steppe recurve bow (level 30), which I think is a recent change. For the second Lulya, she shouldn't be eligible for the bow upgrade as her skill is only 6, but it says she can upgrade also.

While writing this I noticed the inventory screens show not only the same equipment for both, but also same hair & facial features. I don't know yet what may show in the battle screens.

I'll try to upload a save. Also, I want to note that I am leader of Aserai with character name Shalar. There is also another lord in the Aserai named Shalar (although a different clan and look). These kinds of things can be confusing, even without the equipment glitch. What if one of the Lulyas dies? How will I know which it was. I'll have to remove the equipment from both to avoid losing the stuff.

Additional note: I upgraded the bow for the 1st Lulya & it automatically shows upgraded for the 2nd (which she shouldn't be able to handle).

OK, checked in battle. Here's a picture of them side-by-side. http://prntscr.com/1q0dbyt Bottom line is the 2nd Lulya is wearing what she should be as starting equipment, but the game glitch won't let me change/upgrade it.

Do you have a save file before the children are born?

Earliest save of that game uploaded. I haven't checked it, but I'm sure that would have been before they were born.

Doofus said:
Earliest save of that game uploaded. I haven't checked it, but I'm sure that would have been before they were born.
Click to expand...

Got the file. Forwarded to QA. Thanks!

Wonder if renaming 1 would help?

I suspect just removing the first one from my party would allow me to properly outfit the 2nd one, considered doing it and probably would have gotten around to trying it, but the first one died not long after I posted the above. If it was the second one that died i wouldn't have been able to take her equipment. Wasn't aware you could change a family member name, although I prefer to let the game name them (other than main character, which I usually modify a bit during creation).

I mentioned about how another lord in my empire has the same name as me and it can potentially be confusing. Here's an example... 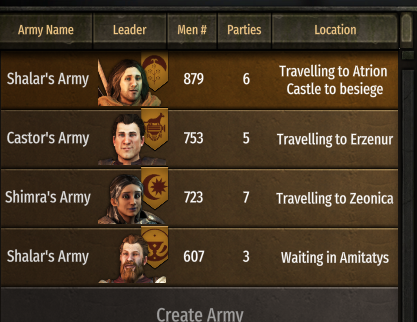 I have to make sure I'm looking at the right party to know what's going on & whether siege defenses, etc are being covered.

Hey guys, I'm currently checking this bug and it looks like there are two different child heroes with the same name.


Ananda_The_Destroyer said:
Wonder if renaming 1 would help?
Click to expand...

So, yes, you can rename one of them as a temporary solution but I'll fix this as soon as possible.

Doofus said:
I mentioned about how another lord in my empire has the same name as me and it can potentially be confusing. Here's an example...

I have to make sure I'm looking at the right party to know what's going on & whether siege defenses, etc are being covered.

Since we do not have an infinite name options, the duplicate names are inevitable. We use the same name options for the heroes that generated during the game and for the suggested names for the player. I'm assuming that you used a random name provided by the game, right?

I've been informed that this bug is fixed and the fix will be sent to the game with future patches. Thanks for reporting and sorry for any inconvenience!

Thanks!
You must log in or register to reply here.

Resolved Child education, 2 year old, notification to do next stage of education keeps popping up until crash.