Very true, 2 units is enough for them, they did not have the influence that the Patriot partisan bands had. I would agree with your choices.

These Queens Rangers Hussars are quite striking! We all know how we love Cavalry! 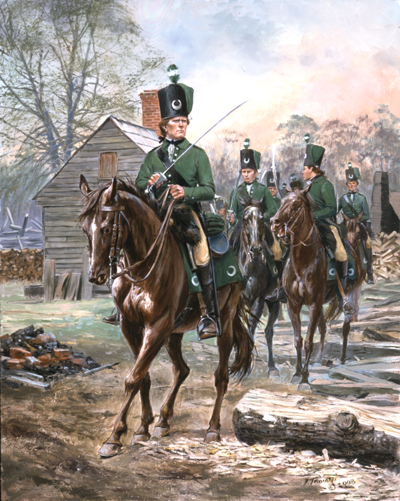 Since I'll more than likely play as Great Britain I'll enjoy playing with these and maybe with the uniform!

They are impressive, but the make up was not just of Ranger Hussars. There were 4 units of rifle, 1 of grenadier, and 1 hussar. They can literally use the same attire as Rogers Rangers, as he was partially responsible for their formation. Woooww...cool
the troop tree must be good...

I agree, loyalist troops would be a great and necessary bolster to the game. One way to do this is to take whatever "Continental Militia" or "Patriot Guerrilla" and make it into "Loyalist Militia" or "Loyalist Guerrilla." As to regular Units, there was a British Loyalist unit called The Queens Rangers, which were the successor of Rogers Rangers within the British army. There is also the Kings Royal Regiment out of New York, and Butlers Rangers that saw action in the North all the way out to Ohio. There is also the American Legion, created and commanded by the turncoat Benedict Arnold, which was another light raiding unit. There are several more battalions of Loyalists troops, most of which would be considered "Provincial Regiments" by the Crown, they would be dressed in a similar red coat, but the rangers were usually dressed in green, and the militia in blacks, browns and grays of their own choosing. Simcoe who commanded the Queens Rangers in America actually defied an order by the the king to make all his men wear red, Simcoe said that it was stupid, and kept the men green.

Thanks Bear! My suggestion would be to include two Loyalist options in the troop tree alongside Loyalist militia and that would be Tarleton's dragoons and infantry from the Queens Rangers and that should be sufficient to represent the Tory's in the game.
Click to expand...

waswar said:
Okay, updated the image by making it bigger, whiel still enough to fit another signature (Perhaps a 1755 old frontier one, which I could find ) heres URL REMOVE strike through

waswar said:
Okay, updated the image by making it bigger, whiel still enough to fit another signature (Perhaps a 1755 old frontier one, which I could find ) heres URL REMOVE strike through

This makes me very happy...Nice work sir.
Click to expand...

Thanks sir! I don't have too much time right now, but I can make some more later on request

Not very big, couldn't make it biggger, but here's another, didn't take too long though, can't find another like the first one...

Ah, those screenshots are from Empire: Total War!!

ETW is my favorite game! And I play it daily, so I easily recognized the pictures.

Heh, yes they are. I also noted alot of the signatures are from last of the mohicans, but theres this commentary, IF I can get a good pic of it...

I can post some screenshots from Empire Total War as a sample. Then if you want, I will give you some more to be used as loading screens and signatures.

Loving this mod and still playing it for two days now..

Here are some screenshots to express my thanks for the team!

Your character is nice. He reminded me of the Mongols, as he is wearing leather.

Mongol?? i want to become Mel Gibson at the Patriot! Notice i got 2 rifle?

i try to use 3 rifle.. but it appears that the battle become much longer because of the slow loading speed..

Btw, mongol history is one of my favorite.. i have 2 thick books about that..

Hey guys! I love the 1755 mod, and I wanted to try this one, but I couldn't find a download section, is it not out yet, or am I just bad at looking?