There are currently 15 formations to choose from (initially 7 at launch) : Goose, Peppa Pig, Big Wolf, Chicky You, Doraemon Tinkerbell Wave, Kakarot formation (in the latest version, there are new formations such as Kacarot Station, Map of China, hellokitty, Dika Ultraman, Eight Diagrams, Butterfly, KFC Crazy Thursday, etc.) - The interface that allows players to define their own formations is not available for now. If you need to realize the formation of your own pattern, you may as well go to my xxx.brf to see how zxpq-zxpq15 these 15 models are done. As long as you master the practice of doing these 15 models, the current version can make the formation system of your own pattern by replacing these several models.

mod operation method (In the latest version, there are two new modes: enemy attack formation and enemy attack formation. Enemy attack formation will be randomly used in the actual formation, while enemy attack formation applies to the content I wrote in the next paragraph, how to do so after 10 seconds) : Wait for 10 seconds to start the battle, and then follow the above prompt. Switch back and forth with left and right shift (note that there are two keys on the shift keyboard, which are divided into right and left keys and shift keys) to select different formations. Press enter to confirm the formation types. After prompted to change, press shift to switch back and forth to select the confirmed formation size, and press enter to confirm the size range of the formation. Then, after the prompt is changed, press shift left and right to switch back and forth to select the station spacing of each soldier in the confirmed formation, and press enter to confirm the soldier spacing. After the complete shape of the formation is generated, press the prompt until the data is completely generated. You can press V to switch whether the formation can be moved or not, and then switch to movable state. By default, the formation moves forward according to the direction of the lens. At this time, press M to switch the conversion between the free shot and the player's shot (a vertical overlooking arrow mode is added in the later and latest version, which allows the player to control the player by default attacking movement for the center of the screen from the top view), so that the camera can move freely in 3d space according to WASD and the Angle of view to match the directional movement of the formation. Then, when the formation is in the static state, i.e. pressing v to no motion state, press b to switch the movement mode of the formation, which can be cut three times to carry out the cycle. The first default mode is that each soldier moves freely, but this will make the formation pattern fall apart when moving, but by pressing V to issue the stop command, the formation soldiers will return to the proper position which can be formed into the pattern. Press b once to move to the second motion mode, the soldier will still fall apart in the movement process, but it will be corrected to the formation pattern position in seconds after stopping the movement. Press b once again to move to the third motion mode, which can ensure that the formation maintains its own formation pattern while moving, but cannot flexibly fine-tune its position to the approaching enemy when stationary. Therefore, it is recommended to press b to switch back to the first motion mode in the static state. When the soldier needs to move to maintain the formation, the third motion mode of b can be used. The second motion mode of b can be used for the formation position after the soldier slowly recovers the movement.

In short, M is free to switch shots, v and the up and down left and right arrow buttons cooperate with the camera to make the formation move as a whole, and b controls whether the formation pattern will not fall apart during the movement of soldiers in the formation.

Then note the number of options for formation generation. Formation type has an option to not generate formation, you can disable formation. The size of the formation refers to the size of the overall area of the pattern of the formation in the battlefield. If the size is adjusted to a large extent, the number of soldiers will be more in the case of a certain distance between soldiers' positions. The pattern may be described by soldiers more finely, but the engine may not be able to withstand jumping out. 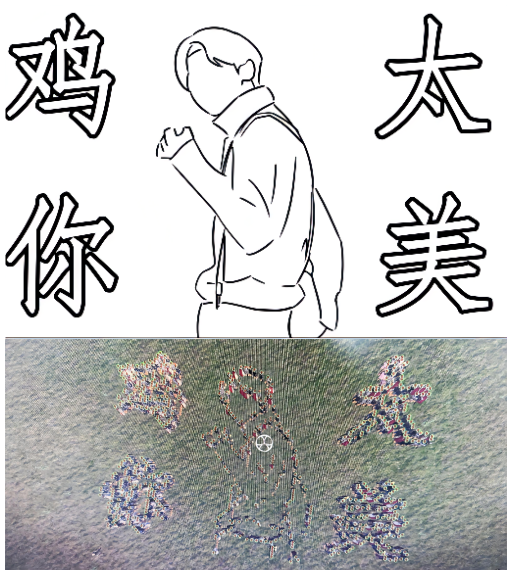 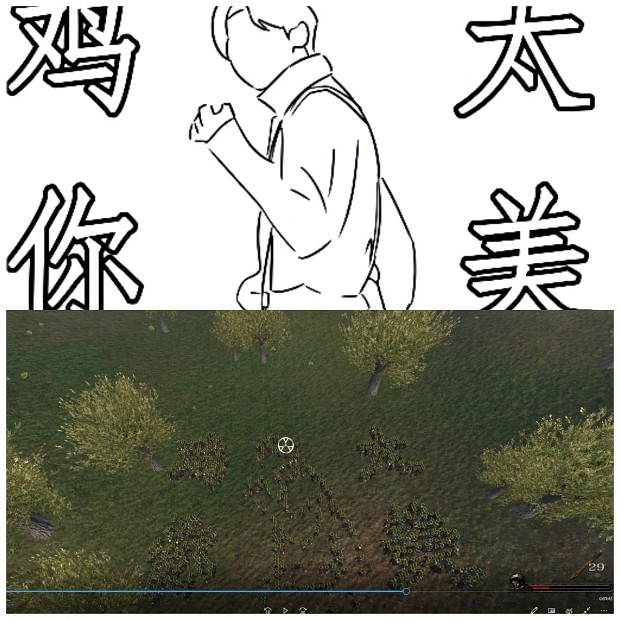 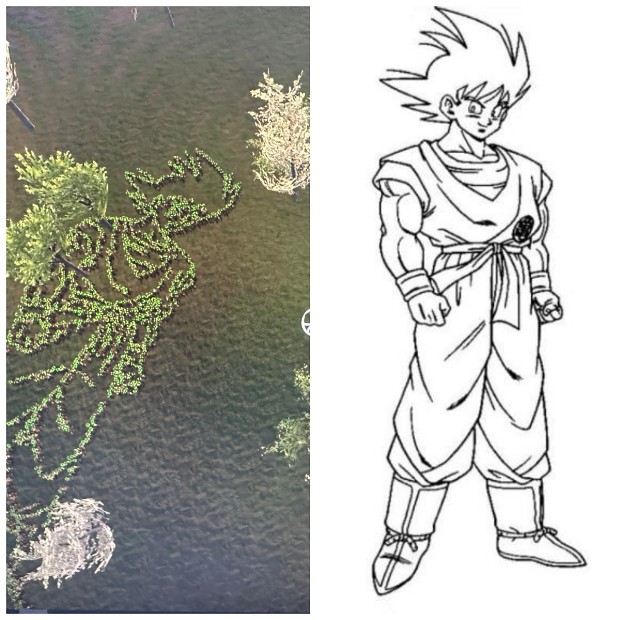 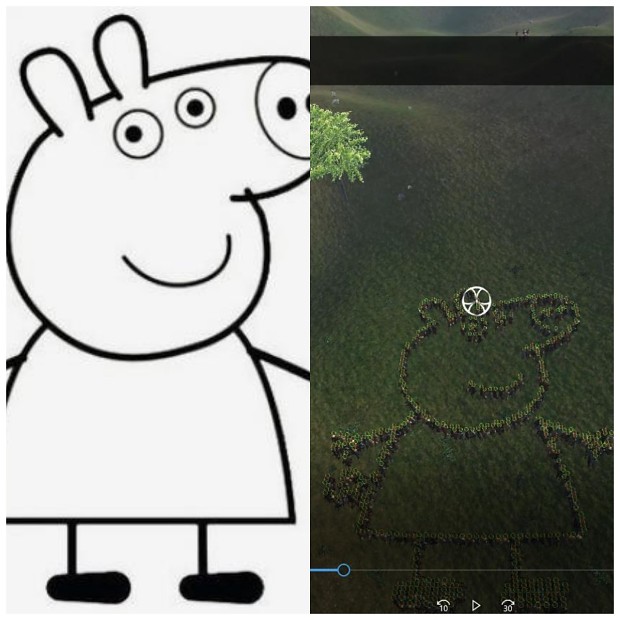 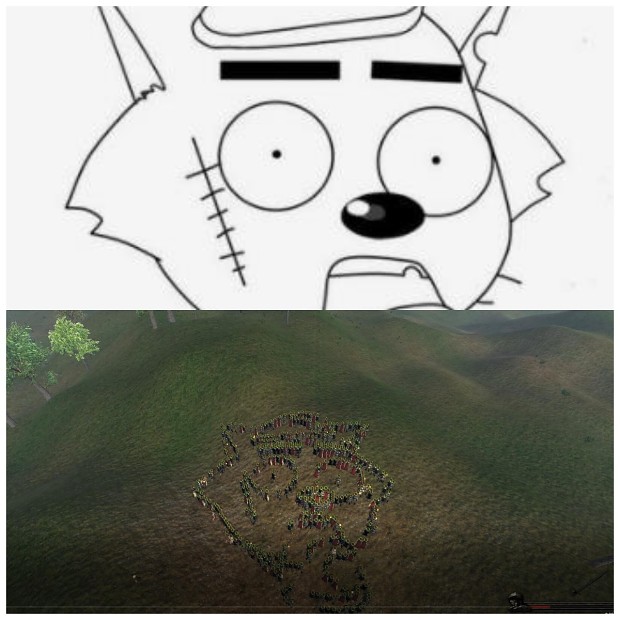 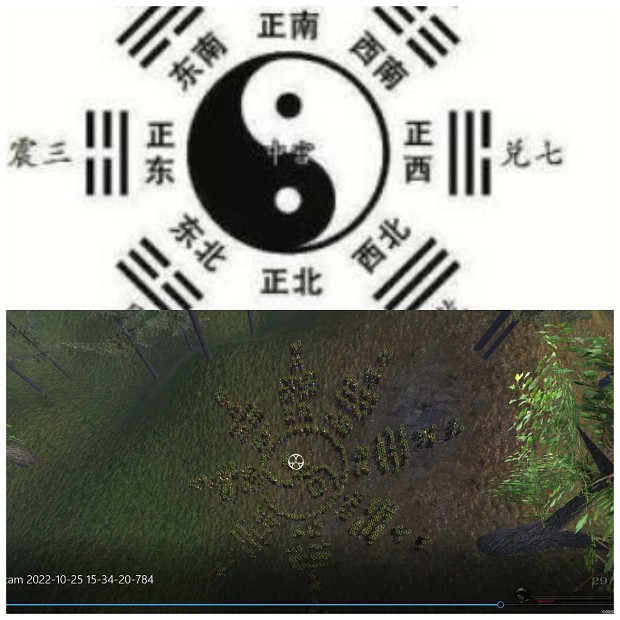 1. Removed the bug where useless field triggers increased speed, and the effect of field scripts on escape made formations break easily.

3. The player can use 10 formations, that is, 3 new formations, namely butterfly array, KFc Grandpa Array, and China map formation

When the war starts there's a choice between y and n. Determine if you are playing as a breaker or a lineman.

Added a lens mode, which is currently the default lens from Warband. There are three kinds of shots: player free shot and vertical overhead shot. When looking down vertically at the camera, it looks at the player vertically from the top down, with the player as the center of the screen. The player still moves and attacks in the same way. This is the main way for the player to see how the formation is arranged. Move at an overhead Angle.

There are still some things to be done the last time will be more finished. Is that the map will be updated later with the nominal army. That is, all in the form of divisions or columns, no longer showing specific troop composition. Because if the formation is going to come out of the big map army, you need too many troops. Therefore, we need to adjust the mapping relationship between large map troops and battlefield troops later

2. Add automatic combat mode, which is used for hanging up and recording videos. After switching mode by pressing J on the big map, players will lose control in the field battle with any troops. The formation template will also be switched to the next category, which is mainly used for automatic hang-up live broadcast when I do other things at night or sleep, and for the duration of live broadcast for gangbangers, you can leave it on. In Progress please, for the love of my sanity, fix square formation