In a real-life battle, clever commanders will look for as many advantages as possible: they will try to get the high ground, outnumber their enemies, flank and surround them, strike by surprise… If they could do so, they would only engage battle when odds are overwhelmingly in their favour, so the battle ends even before it begins. Video games, on the other hand, are supposed to be fun – and for that, they need to be fair, especially in multiplayer. If you see yourself in a disadvantaged position, you should be there because of taking the wrong decisions, not because the game failed to find a balance where it’s the one with the best skills who win. In a game with deep gameplay, such as Mount & Blade II: Bannerlord, with so many different factions, troop types, weaponry, terrain, etc., finding that delicate balance is particularly tricky.

Love the blogs! Would love a release date too

So soon? Thanks! (now have to wait, it's loading)

EDIT: Nvm, read it on Steam.

First time in a while someone from devTeam liked that faction. And cold sweat broke down my back at that gif.

Now, that was beautiful.

Taleworlds tell me that spears work well by applying reverse kinematics and offer me a 3-level AI that works.

It's sad that weight is class based rather than equipment based. The game seems VERY dumbed down (multiplayer).

Nice. Are those spears glued to the back of the pinks?

These look to be Spears rather than Lances. Interesting. Assuming these are Vlandian Knights makes me wonder if they have adopted the lance or not. Presumably Kuzait Lances and Cataphacts use them.

It's certainly a buttery slope if you change one thing you affect basically everything else.
Click to expand...

Cool, now that the game has proper physics cavalry seem more stronger than ever. You guys better remember to make sure spears behave like spears, you know, make the units stab the goddamn horses and not just stare at it like a bunch of braindead a-holes, if modders managed to do it you guys sure as hell can, it would be bloody stupid if that wasn't implemented

Can someone say that the trebuchet can break the outline of the walls?

I love that gif, but damn, so many spears and yet so few actually used

Lovely read and gif. Although, if I had to nitpick, I don't really like how they all perform the same animation when being hit by horses.

enesmio said:
Can someone say that the trebuchet can break the outline of the walls?
Click to expand...

That the trebuchet can break the outline of the walls.

Okay, so why did the spearmen not use their spears or am I blind?

Wow, that charge gif, beyond how pleasing it looks visually, it really fits with the blog’s context when considering the mention in the blog of a poor commanders decisions being the factor deciding battle outcomes, eg the purple’s troops decision to form up on a flat plane rather than on the hills nearby, against a charging mass of heavy cavalry. With the result being the infantry formation being bowled over and shattered.

Edit:
Also to the above comment, when considering that the infantry were on a flat plane where the cavalry could build up speed, Spears could only do so much to stop the weight of the Vlandian Knights bearings down on them, perhaps if the battle had taken place on a sloped hill, the outcome would’ve been different. Though I can agree that the ai seemed to have problems knowing who to thrust at, you can see a few of them turn to face bots to their sides that they couldnt reach anyways rather than the horses at their front.

I hope that gif isn't the sexiest thing I see all day and night.

HOW SEVERE COMPARED TO WARBAND; WILL MOVEMENT PENALTIES FOR USING HEAVY ARMOUR/WEAPONS BE?
“As mentioned above, in multiplayer, we tie movement speeds to the class rather than weapon weights or armour. This enables us to, for example, make a berserker very agile, even though his weapon may be very heavy. Also, an important factor is that, unlike in Warband, we have a combat speed and a normal speed. This means that once you raise your weapon or block, you will slow down to a combat pace, which greatly reduced the amount of face-hugging going on and prevents players from constantly holding up their shield and turtling in combat. These speeds, as well as, the acceleration can also be set for each individual multiplayer class, giving designers (and eventually modders) an easy way to create unique classes without having the hassle to cross balance the weights of the armours for every small change.”
Click to expand...

Thank you for answering my question. I cannot say how happy I am about this. Face hugging was always a huge problem in Warband multiplayer, evidently I learned to adjust to it and abuse it as a 1H + Shield main but it never felt like fighting. I was always, along with others, in a massive advantage abusing this tactic with high sensitivity to the point of being cheap. This is literally music to my ears. That's what the biggest request was from both players who play the game like me and people who did not like the game, that fighting does not really look like fighting but a number of mechanic abusing (face hugging, backpedal spam with 2H, feint spam etc) systems that caused a lot of visual dislike and unrealistic movement. While I am used to warband's broken systems, I can't wait to see how fresh this will be. Man, i'm excited now.

not a MP player, so I will comment on the gif

why did they break formation? The first line turns their back to the advacing cavalry to try to attack the nearby horseman, thus commiting suicide. That army needs a sergeant hehe.

Shame those infantrymen were plowed through. If only they had a sort of long, pole-like weapon with a pointy metal tip to use against the cavalry... 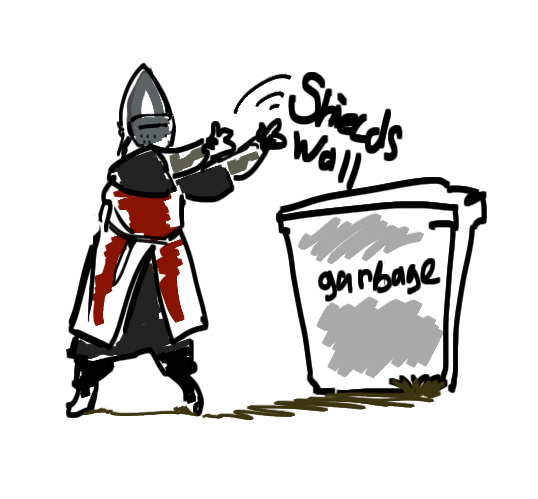 Actually managing villages is there any hope?
2

Base Bannerlord is better than base Warband
5 6 7