so I've been reading about random bans quite regularly here lately and actually just found out that I'm banned myself now.
This is not supposed be a unban thread or something - to be honest a break from the game will do me good - but just wanted to tell you that your current handling of ban request is neither really effective nor helfpful in regards to your player base.
Because at this point I don't even know what exactly I'm banned for. Apparently I'm banned for "Teamkilling/Friendly Fire", but I'm playing this game quite regularly and cannot retrace what moment you're referring to and therefore cannot do any better in the future (besides from trying not to hit teammates, but I've been doing that in the past already).
From what I've been reading here lately you're processing the requests manually and therefore bans come into effect much later after the incident happened. Like that there is no learning effect for the apparently guilty one whatsoever (+ no time to explain oneself) and you are just denying her/him access to the game at this point, which is kinda counterproductive at the current size of your player base .

Just wanted to throw that out there.

Have a good one!

@MArdA TaleWorlds there's been quite a lot of posts like this recently. Would you guys mind explaining the banning system / method in more detail? Cause as of right now people don't get enough information what they're actually being banned for. You mentioned in another thread that 9 teamhits in 30 seconds is considered intentional teamhitting. Now what if it was just a very unlucky situation? For example when you're in a 5v5 melee and you don't know how to handle your swings properly? It often happens to me as well that I hit my teammates in fights cause I swinged sideways. Maybe that player is new to the game and hits his teammates on accident quite a few times and they, angry about having a noob in their team, report him.
In general you guys should probably look at your current system and see what you can improve, as it seems to not work the way you intended it to work.
One thing you should definitely give people is the exact time and reason for the report. Just a few sentences like:
"You were reported for teamkilling on 10.12.2020 04:20 GMT. After reviewing the logs of the game we decided to ban you for x amount of hours / days. Further details can be obtained by contacting (insert the person they should DM) via direct message on the forum."
This would solve 90% of the issues people have with the current banning system. You got the exact reason, time, and contact you need to understand the ban.

An overwatch system you mean? Dunno if M&B has enough people to actually pull that off. It needs like 3-4 people judging every single case (at least if the CS system is still how I remember it from 4 years ago)

Thanks for your input, will forward this to the team. We have plans to improve the system in the future and we will try to address these issues.

All of the bans we handle are manual, for now. We have plans to improve the system more in the future. But I don't think i can disclose our plans regarding this at the moment.
Players are shown this screen when they are trying to login to the game if they are banned. 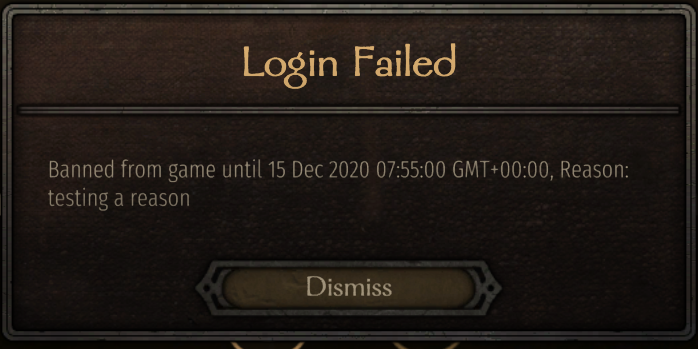 Of course, we don't just ban people for one or two team hits, we check the logs, we can see who they attacked when they attack or if that attack resulted in a kill. We know our game and team hits and teamkills is a natural part of the gameplay. Players attack their teammates even if they don't want to. But, If the player has attacked a player a lot of times in small time frame (we can see the game time when the hit happened. So we can see if it's happened in warmup or not) or killed their teammates more than 3 times we consider that against the rules. And not all of the team hits are automatically being logged in to our database. All of the punishments we gave are from in-game reports. If you got punished it means that you have been reported. And believe me, most of the reports we receive are not even worth considering.
Thanks for your input, appreciated!

Let's not spam or speculate regarding these matters. Thanks!

JakobvanBicke said:
An overwatch system you mean? Dunno if M&B has enough people to actually pull that off. It needs like 3-4 people judging every single case (at least if the CS system is still how I remember it from 4 years ago)
Click to expand...

Overwatch system is a colossal thing to do. And it is not acting faster. They issue bans in waves over time. And we don't have resources as Valve has and its simply nearly impossible to sustain.

I have been banned for two months