Alright, I think it's time to have a thread about this evil phenomenon.

I've already seen a bunch of messages from 0.9 players who report frequent ctds (even with "load textures on demand" enabled, which is a must), but I need to know for how many people it's the case.

Do you experience ctds in 0.9? If so, did you notice any tendencies (the reason can be as small as 1 particular item that somehow causes some engine exceptions despite visually being no different from other items)? Maybe troops of a particular faction are always involved, maybe the kind of terrain (e.g. you have ctds in snowy terrain but not in desert terrain), maybe something else. Please post your battlesize too.

2) Yet another possible solution:

3) Recommendations by Full Invasion 2 team (another demanding mod with too many items). 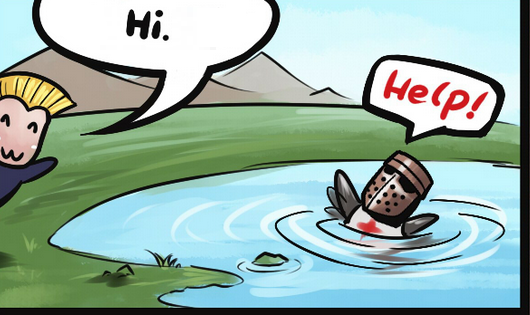 Here is a list of tips that you can use to find out how to stop crashing when playing Full Invasion 2. It might not work, so please don't blame us. Warband is not a very optmized game to be honest.

4) Possible solution for those who have crashes on NVidia cards:

5) In general, try using configs provided by players who don't have ctds:

I've had a single CTD without an error message. The game froze and after a few seconds closed back to desktop. I have included as much contextual information below as I can remember.

Scene: "Rally the militia to defend the village" scene that appears at the end of the "Train the peasants of X" quest in Lior.

Units Loaded: Attacking bandits appeared to be the "Wandering Criminals". My army, besides the villagers helping me, was a small amount of Aroulo infantry of various ranks (always on the line leading towards Proven Warrior), and Geldarin troops of every type (including a couple Honor Guards) except the new "Geldarin Swordmaster".

My character is a female human.
I also have the new Dwarf companion, Shi Jin, Zaira and Kara in my party, who all have their default starting gear currently.

I always use "Load Textures on Demand"

I'd be happy to provide more specific information if it helps you at all once I am back at my PC.

I get CTDs every now and then in various kinds of battles. For example: Getting rid of bandits in a village, joining a battle to help a lord, a lord joining my battle, fighting alone, etc.

So far it's happened with all sorts of factions as well, Volheere raiders, Snow Crawlers, Eagle Knights, though only once did it happen when fighting a proper faction (Valahir).

The one item I've been using the whole time is the balanced jousting lance, I've changed mounts, armours and shields pretty much all the time in the early game but I always stuck by that lance.

The crashes began before I got to the Mercenary Guild to get the customizable troops.

Hard mode is disabled, diplomatic and economic changes are set to high. Oddly enough, I disabled the sprint feature but my character can still sprint (though there is no stamina bar that I can see).

Edit: Crashes have happened both in forests and in snowy areas, but I haven't been to the desert too much so I can't tell if the crashes are also present in desert scenes.
My battle size is set to 300

Yes, as noted in the main thread, I get random CTDs in battles, no performance problems, no lags, stable framerate of 60, on a Nvidea GTX 970, updated drivers, no problem at all with any other game, neither with M&B mods or the previous version of Perisno.

Adding reduce_texture_loader_memory_usage = 1 to the module ini file as suggested in the main thread didn't help either, it hurt performance though.

I'm not sure but it may be that the crashes tend to happen in areas with lots of enviromental objects (trees, bushes and the like), but I'm not sure, I haven't played much because of the CTDs.

btw ... I was very early game, so I attacked only the peasant in the initial quest, robbers (guildmaster quest) and escaped prisoners. I got random CTDs in all cases. Those were all rather small battles, I had only one companion, no other units, enemies ranged between 6 and 30. Battle unit limit is set to 152.

OK, I try to be more specific.

As I wrote, I'm very early in game, I've started on Elintor territory, so I've visited only their three cities and the 3 Tolranian one, had no problems there though only accessed the town menus to enter each tavern, get to the merchants and talk to the guildmaster.
My first CTD happened in my very first battle against the peasants (initial quest). Upon reloading i was able to play it thorugh. From then on I had a CTD every 3 to 5 battle. The crash happened always mid battle, when engaging enemies, facing one or more of them. It was not in any forest or mountain area as I always try to avoid combat in them, but I think the maps involved may have had a lot of enviromental objects (vegetation), though I may be wrong.

Mine just crashed (again). In my estimates it's maybe once every hour of gameplay.
Specs - Ryzen 2600x and RX580 8gb. No perfromance issue playing on 2560x1440. Windows 10 home version (original).
Experienced maybe 10 CTD's during 300+ hours on earlier Perisno versions. Battle size is ~800 through the "Battle Sizer" (changed from 378 after the second CTD).

I'm a male dwarf in day 14. Zaira, Thrak, Slyter and Tylen as companions. My character has the same gear i had exciting the mine (used that start) except weilding Nisayian's Legacy and have a pony.
I have a very diverse party with a few of each: bounty hunters, mercenary stalkers, kaikoth footmen, a few bakhal soldiers, Drahara wind archers, drahara elite spearmen, perisno novice and just got 3 elintor recruits. A total of 34 in the party.

Setting: Just attacked a Anakars party of 14. They hade 14+40 So thought I could get some money from prisoners and maybe recruit a few. Everything went well, they hade 2 riding archers left went the crashed. Froze for 3sec then went back to desktop.

I checked "Load textures on demand" and it's on.

______________
Update: CTD again
This time I was in a village to track down a murderer for a lord.
Just when I land the killing blow I went back to desktop.
Never had a CTD outside of a battle as far as I know.

Code:
Here is mine.

I also don't seem to have crashes. I don't have time now to play 0.9 normally but I did some testing (participated in like 15-20 battles between lords of different factions) and had no ctds during these tests.
I also only had like 1 or 2 ctds when I played PNB (II) the last time (from beginning to the end, about ~300 days), and assets in Perisno 0.9 and PNB II are 98-99% the same.

So those who have frequent crashes - try my and/or arduus's configs.

Change of vote - the game crashed while I was engaging 50-strong demon worshippers party. It's been the only crash in my 75 days in game though.

where do you find it?

Kharille said:
where do you find it?
Click to expand...

Leonion said:
Code:
Here is mine.

I also don't seem to have crashes. I don't have time now to play 0.9 normally but I did some testing (participated in like 15-20 battles between lords of different factions) and had no ctds during these tests.
I also only had like 1 or 2 ctds when I played PNB (II) the last time (from beginning to the end, about ~300 days), and assets in Perisno 0.9 and PNB II are 98-99% the same.

So those who have frequent crashes - try my and/or arduus's configs.

I've been getting consistent crashes in larger battles of ~200 people even though I didn't get them in 0.8. Not an ideal solution, but for now changing Render Method to DX7 seems to have fixed the issue.

Marcus_SFAC said:
With this rgl_config.txt file ,CTD still happens after I push CAPS LOCK button after a battle .
Click to expand...

Why do you push this button?

No CTDs for 94 days (but have ~2-4 sec freezes every 5-6 ingame days, usually when several factions making some diplomatic agreements at the same time), here's RGL

Marcus_SFAC said:
With this rgl_config.txt file ,CTD still happens after I push CAPS LOCK button after a battle .
Click to expand...

Why do you push this button?
Click to expand...

My mistake , the button I pushed is tab

well, I modified the rgl_config file according to the one you posted and it did not help, unfortunately I got a CTD the second battle I played after applying the changes. I wonder if it's a driver issue, I have a gtx 970 with up-to-date driver. Anyone else having CTDs using a nvidea card with the current driver? In any case, I'm giving up playing the mod for now, it's just too frustrating those frequent CTDs in the middle of combat.

I had a lot of freezes a couple of months back when playing Mount and Blade, I read on a forum that the graphics driver might be the problem. They recommended to uninstall the previous driver before applying the new one, I had no freezing during the battles after I did that. I always uninstall old drivers before installing the new one ever since. I doubt it is the cause for the CTDs, but I would like to share it, if anyone has freezing issues with Nvidia.

it may indeed be a driver problem, I'm giving the mod a try on my older PC with a GTX 660 and no up-to-date driver and so far had no CTDs, though I've only had 3 battles now. I'll update later.
You must log in or register to reply here.