Need More Info "...crashed because it could not get new memory from the operating system."

Summary: The game consistently crashes most particularly after the major battlefields (1k+) while receiving the prisoners, generally on the third or fourth prisoner in row. And it request an unaffordable amount of memory size that is about 32gb of RAM. The error I receive is not specific to version 1.6.2 but I am having problems with it, probably since the 1.5. versions, maybe even more older versions.
How to Reproduce: The crash rarely occured DURING battlefields (two or three times out of numerous same errors), and erupted for one time while entering a certain castle which I can't remember the name of it at the moment. But it is nearly certain that the game would be crash after major battles. I don't know what it exactly triggered by. Less often but it is also appear after the mid-scale battles as well. End of sieges usaully leave off smoothless no matter what the army size is.
Have you used cheats and if so which: No.
Scene Name (if related): Post-battle prisoner scene.
Media (Screenshots & Video): 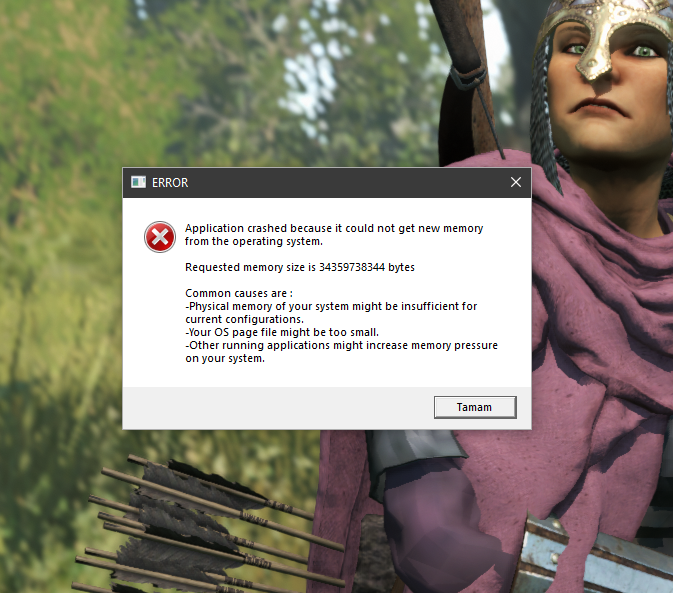 Sometimes it happened to me as well, but not while taking prisoners or in/after battle. Always when I loaded campaign map and almost instantly try to scroll back so I could see more cities to travel to.

Hmm. Maybe, the prisoner I receive is the last prisoner and the game actually crashing while loading the campaign map. That is to say, it is maybe the map loading process is behind the crash but nothing about the prisoner receiving. Never thought of that, much thanks!

Something about removing the defeated parties on the map, perhaps?

Edit: But the sequential scene should be the inventory/loot scene, not the campaign map, isn't it?

I think it should, never had a problem with that. I just always have to wait a few secs, before I zoom out the map after campaign map is loaded and it's fine.Or at least just don't do it too quickly when you start on a map.

Hello, can you please have a look at our crash checklist and common workarounds to see if any of the steps in there helps with the crashes? Please let me know if the issue is persisting after completing all of the steps.
You must log in or register to reply here.

In Progress Crash Shortly After Updating to 1.6.4.