I just hired another companion to my party and I noticed his perks, attributes and focus points need allocating. I did not notice it being this way when I first hired him although he has not been in my party long. Is this a new feature or a weird glitch? Maybe I accidentally implemented a feature I'm unaware of. If so can someone share with me how to reset companions'/family members' perks?
thanks 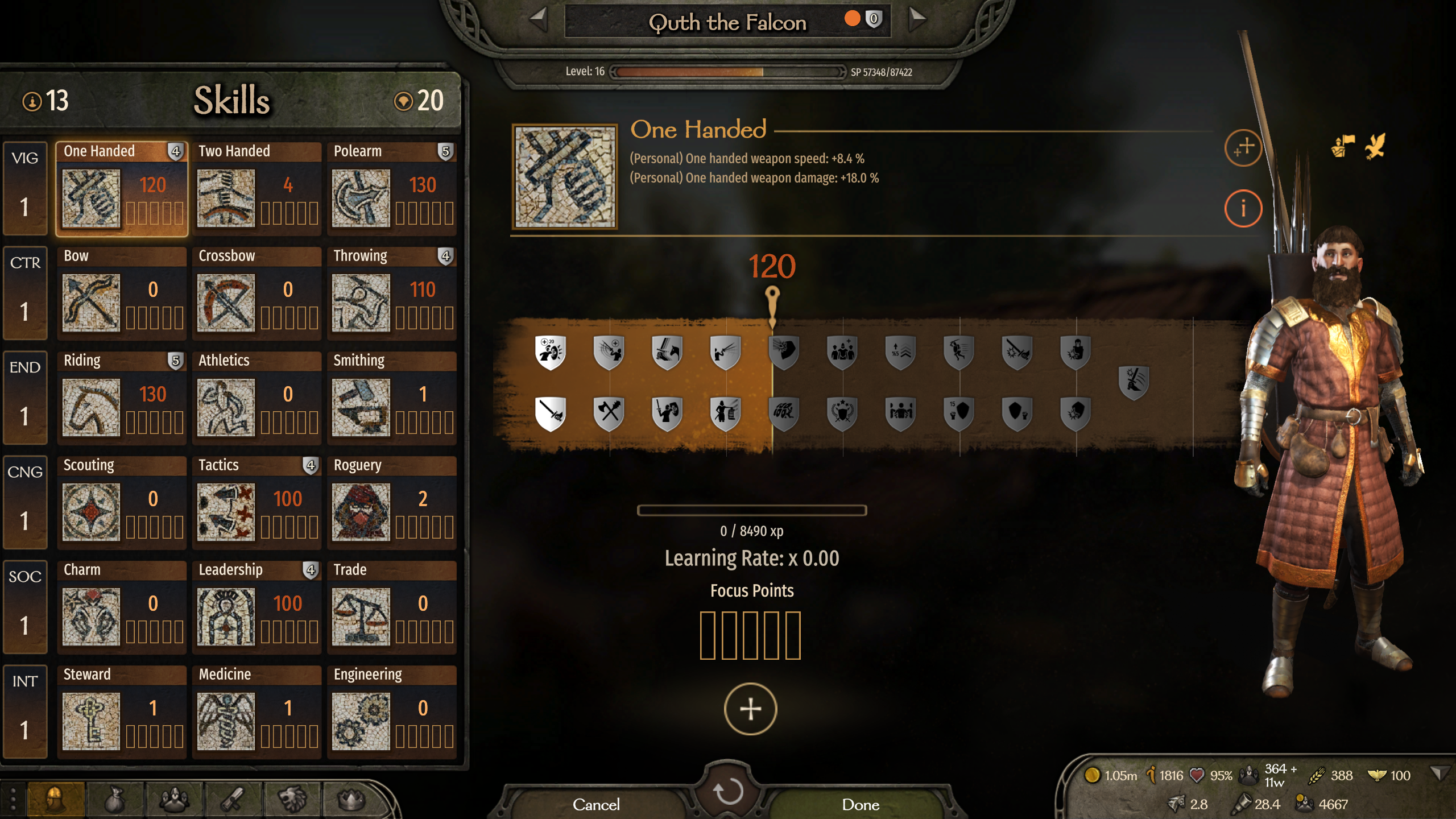 Only Mod or Cheat, I think, but normal without mod, can't be done, I do wish there is option to fix, I try to hired companions with very few and low skill, so that way I had more control, but downside, it's low level, thought.

CptMuppet said:
It's a glitch and it's not new. I think AI heroes allocate perks, attributes and focus points once an in-game day and also I think these points are not allocated right after new companion spawns. This seems to cause small time window - from spawning new companion to the in-game daily update - in which you can hire a companion with all these points and perks not allocated yet.
Click to expand...

CptMuppet said:
It's a glitch and it's not new. I think AI heroes allocate perks, attributes and focus points once an in-game day and also I think these points are not allocated right after new companion spawns. This seems to cause small time window - from spawning new companion to the in-game daily update - in which you can hire a companion with all these points and perks not allocated yet.
Click to expand...

Thanks for the info. I always knew the bug exist but I thought it was random.

I just tested it and it does indeed appear that if you catch a newly spawned companion before the daily update, then they have not been allocated.

Weird. Thanks for the replies. I was super confused. I guess I get to spec him out how I see fit ?

humility925 said:
Wait, I do not understand how it work, so how it work?
Click to expand...

Every companion spawn on the map without allocated perks and points, they get allocated roughly on in-game day later (AI spends those points and picks perks for heroes once a day). Because of that you can hire a companion with all the points ready to spend if you are lucky enough to find one right after he/she spawn.

Edit: At least it seems like it from my experience. I didn't check the source code of the game.

Hmm, that's not good, only last one day before it's spent point on it? I had no chance to get all hero before day is up, I would like companion do not spent point and perk without I am plan it, because it's lot of misplaced all over on companion.

I prefer control over companion fully, warband is more bearable to deal companion, this game is less bearable due too much random.

humility925 said:
Hmm, that's not good, only last one day before it's spent point on it? I had no chance to get all hero before day is up, I would like companion do not spent point and perk without I am plan it, because it's lot of misplaced all over on companion.
Click to expand...

New companions are spawning from time to time, so technically there is a possibily to fill your clan with such companions over time. However, to do this in practice, you would need to regularly check the encyclopedia for new companions and save scam to be able to get to them in time.

In my playthroughs I usually get 2-3 such companions by just pure luck.

It's hard to get them, but after all it's not an inteded design, it's just a bug/an exploit.

Forwarding the issue to QA team for further investigation. Thank you for the detailed information!

MArdA TaleWorlds said:
Forwarding the issue to QA team for further investigation. Thank you for the detailed information!
Click to expand...

I have tested it more using cheats on new campaign in beta e1.7.1.

Once an in-game day - somewhere in the middle of every morning - the update allocating perks and points hits. If you hire a companion before the first such update in their life, they will have unspent points and perks ready to pick.

I think this bug/exploit was poorly/partially fixed some time ago - it has been fixed only for starting companions to be specific.

It seems like in beta e1.7.1 (and probably also in few last versions of the game), new campaign starts right before the first perks/points allocation update hits, so even if you use cheats and teleport as close as possible to a town, you won't be able to enter it and hire companions before the first update and this bug/exploit won't occur. I remeber it was possible few game versions ago, but not anymore. However, this exploit is still possible for companions who spawn later in the campaign.


Besides fixing this issue, companions need some rebalance in my opinion. It is hard to create some useful character build for any companion available in game. They should have much lower starting levels or they should have points partially spent and partially waiting ready to be spent by the player.

Fixing this exploit without a rebalance would bring more bad than good to the game, because this exploit makes possible to have decent companions. If someone doesn't like it, they can easly "fix" it by hiring companion one in-game later, or by hiring them right away and enabling "Auto Allocate Clan Member Points" option for one in-game day.

I prefer they fixed this bug, but same time add option like buy from npc to teach or training companion to reset perk and skill forced so player can choice right set for their companion, instead.

Same thing rename and look, even culture as some player won't choice due culture, because some culture had very few to none while other had many but not in same cluture, so go on, and sometime NPC look out of place even in culture.

humility925 said:
I prefer they fixed this bug, but same time add option like buy from npc to teach or training companion to reset perk and skill forced so player can choice right set for their companion, instead.
Click to expand...

It might not be enough in my opinion. In current game version, If you want to increase one non-combat attribute to 10 for a companion, you need to level them up to level 28-32 in the best case scenario. Without smithing grind it's almost impossible to do before they die of old age, let alone in more reasonable time. They also don't have many focus points at this level, so you can't make more interesting builds than just maxing out focus points for 2-3 different skills that are interesting to you.

For a comparison, your child at level 32 would have 10 points in two picked by you, non-combat attributes and 5-9 in the third one, and they would have maxed out focus points for picked by you 9 different skills. They also start their adulthood at something like 21-27 character level and you can start leveling them at age 18, so they are easier to level up to the high levels.

Melee combat companions aren't that bad in a way, because you can get ones with really high Vigor attribute and a lot of focus points in melee skills, but they also have most of their perks already picked, so it is much harder to make nice build for them.


To be clear, I don't think they shoud have as many points as main hero's children, but they clearly need either (or even both) more focus/attribute points than they have now, or to have more customization options of existing points they have.

Edit: Hiring an engineer or a scout as a companion and not being able to max out their main skill (not enough attribute points) is just sad.
Last edited: Jan 27, 2022

Do you have a save file of session that you experienced this issue? With your save file, we can reproduce the issue much easier and faster. You can find your save file here:C:\Users\username\Documents\Mount and Blade II Bannerlord\Game Saves
You can send your save files to us via the ticketing system on the website. To send us a ticket, please visit the www.taleworlds.com site and login to your forum account from the top right. Click to "My Account" and then click to "My Open Tickets". You can create a ticket there and include the save file and as well as the forum link of this thread. You can find more info about how to upload files to us with the new ticketing system here. Thanks for reporting and sorry for any inconvenience!

MArdA TaleWorlds said:
Do you have a save file of session that you experienced this issue?
Click to expand...

I have a save file named "companions points bug.sav" in which you can easly spawn bugged companion. I have uploaded it via ticket system. Save file is from the newest unmodded beta e1.7.1.

This save file is from fresh sandbox campaign in which I have done only one thing - I met all starting companions by teleporting from town to town and talking to them. I also added them all to bookmarks in the in-game encyclopedia, because it makes it easier to spot a new companion spawning.

To reproduce the bug in my save file, wait outside the town till midnight - a new companion should spawn at the evening. After that go to Husn Fulq and visit the tavern - the new companion should be there - if you hire them, they will have their points unspent yet.
If you wait longer before hiring them, for exapmle till noon instead of midnight, they will have their points spent already, because points/perks update happens in the middle of the morning.

Got the file, forwarded. Thanks!

We were not able to reproduce this issue on our end. Therefore we consider this issue as fixed. If you experience this issue again please let us know.
You must log in or register to reply here.

Wednesday at 4:19 AM
VVL99
In Progress Number of parties full but I can create one or more again when releasing a prisonner companion