Please leave all map-related feedback for Castle of fen Altai in this thread.

Right on time Callum, I just needed this

Here's a glitch I encountered yesterday.


The position on the map is this: 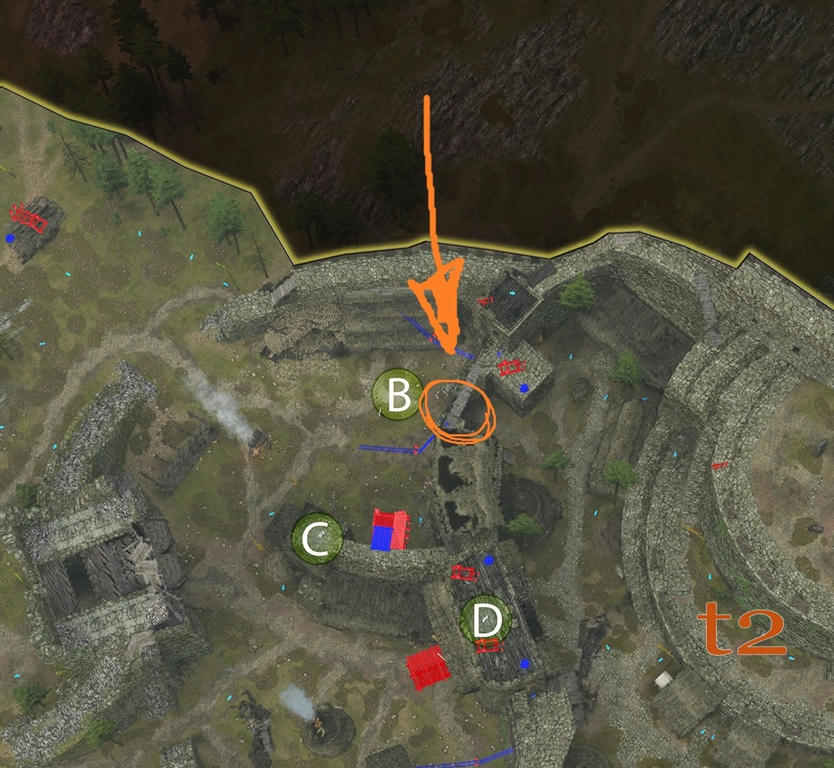 As attacker is the left sieg tower useless. The archers can shot you in the back, if you climb it up. You have to redesign the siege tower or let him docking on a wall, where archers can't shoot you in the back. I have possibilities come into the castle, after B and A is taken. I just miss one more on the right side. There is just one ladder to climb, which archers can easy defend. I think a tunnel or double doors would be to much, but some other solution would be nice.
Like the idea with tower in the middle for the archers. Is something different to other maps which I know in other games.

As defender I see a lot possibilties to defend the castle. Just on B sometimes it's hard to defend, if attackers are already there. They can easy kill you, if you jump down and falter. It would better to have a little bit more faster and easier way to come down.
After F is taken by defenders, I have never seen a game, there the defenders could held G. 100% of all match up this point attackers won here. The way from the respawn point of the attackers to G is to easy. Also the attackers can come from different sides, where the defenders can build up a tactic againts this. It's ends up that defenders run to G and try to kill some many attackers as possible, before they die. I would prefere to put the flag more to the back walls and just let some ways to reach here, so that defenders have the chance to defend it.

The attacking teams archers are actually in a superior position at the start.

No castle would ever be built in a location where attackers can swarm up the nearby hills and easily fire into it....The fact that the ruined gatehouse is the largest and tallest bit of the castle is madness.

A defending archer should never be in a position where they are getting shot from the sides and above or from in front and above by the enemy archers prior to the enemy capturing the walls. Thats the entire point of walls, they were designed to protect defenders from this. If someone did build a fort by a hill they would have built a wall high enough to prevent archers on the hill shooting in so easily. Instead this map encourages this to happen.

A few invisible walls would be an extremely quick fix for the devs without actually altering the appearance of the map. Prevent the attackers from climbing the ruined gatehouse or flanking up the sides on the hills. This would stop them firing along the walls and down into them so easily.

Gragnok said:
No castle would ever be built in a location where attackers can swarm up the nearby hills and easily fire into it....The fact that the ruined gatehouse is the largest and tallest bit of the castle is madness.
Click to expand...

You are not wrong in your post but I can imagine that the ruined gatehouse is part of a bigger wall that was destroyed in a previous siege and the defenders just havent had time to replace it yet. The larger wall would likely prevent people from actually using the hills to fire into the castle.

+1 for the siege tower not getting to the wall. I've probably played this map a few dozen times and I only ever remember seeing that siege tower make it to the wall maybe twice.

There is a bug near the breakable bridge where items dropped near it appear oversized, giant items.
here's a video: 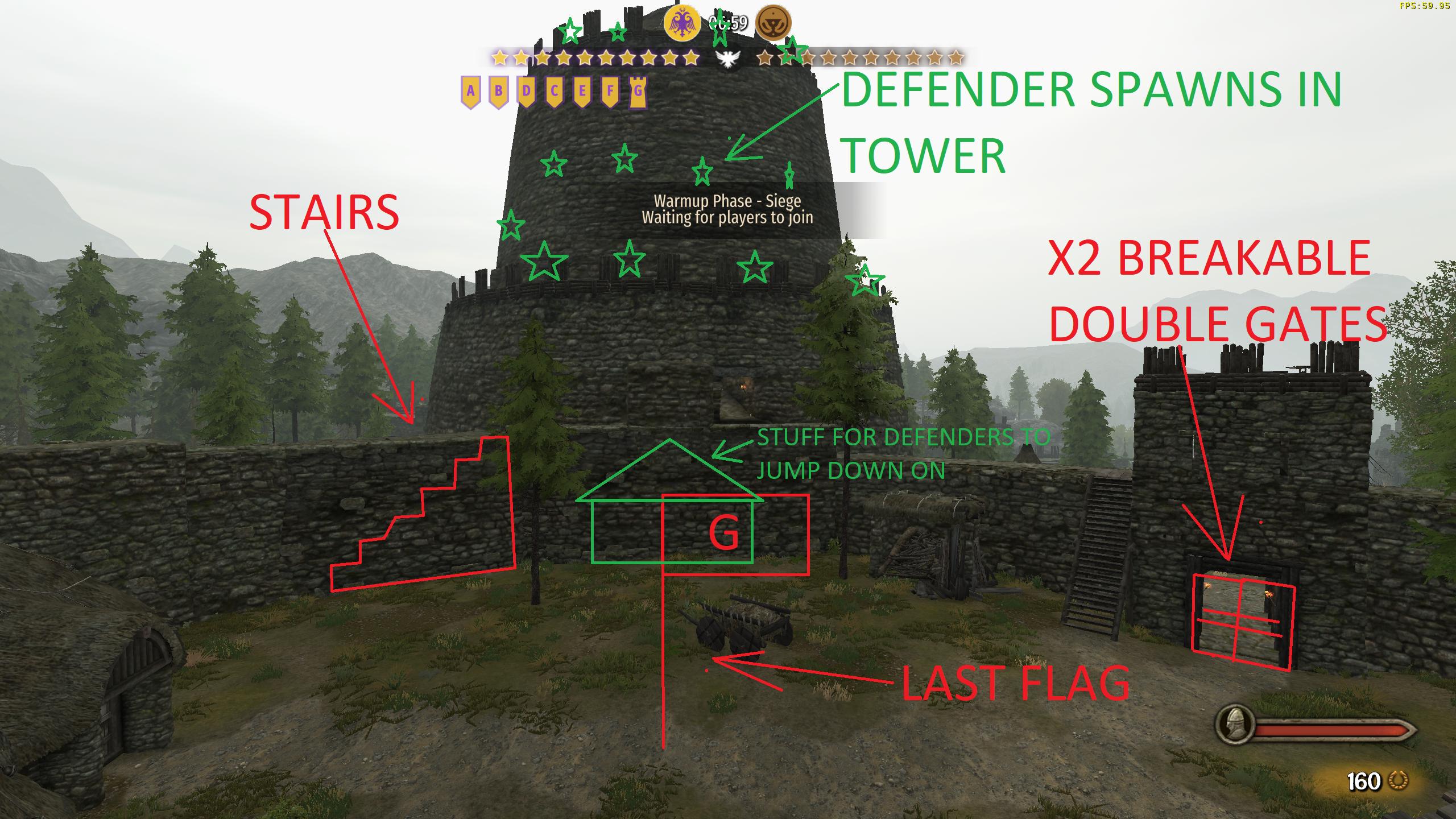 Move G and Defender Spawns, It gets captured too easily

Archers can shoot through wall,without being seen.

I think a big issue with this map is how accessible G is to cavalry. Once the weakened wall is broken (which usually happens pretty fast unless the defenders actively try to stop the artillery) cavalry just needs to break 2 barricades that go down in a few hits and then they can contest G the entire game, meaning you'll constantly need people sitting on the last flag. Often you'll reach this state even before A and B are taken.

Davic said:
I think a big issue with this map is how accessible G is to cavalry. Once the weakened wall is broken (which usually happens pretty fast unless the defenders actively try to stop the artillery) cavalry just needs to break 2 barricades that go down in a few hits and then they can contest G the entire game, meaning you'll constantly need people sitting on the last flag. Often you'll reach this state even before A and B are taken.
Click to expand...

And at that point, it becomes a coin toss basically, who has the biggest cluster**** wins.

Is this intentional? Horses can completely bypass the two wooden barricades by jumping over this thing. The strategy on this map is to quickly break the B wall, then storm that side with horses, jump over this part and quickly cap F (by quickly making your way up the long stairs with a horse) and then G (unless a troll defender destroyed the G barricade for no reason, you probably would go straight to G first). If you thought one person doing it was annoying, imagine multiple. Easy way to help the attackers capture A and B quickly and move on because the defenders are probably sending 7-10 people to recapture those points constantly (or at least try to recapture and stay there) if just a few attackers are doing it.

Siege maps are pretty equally balanced if it's a full 60v60 from the beginning, but because the game is dead and the game never really gets a full 60v60 until late game (ie. F and G fights). So, siege maps tend to be harder for attackers in general because of this and so you might reason that this gives the attackers an edge to balance it out. But still, because of the two wooden barricades there, I don't really think this was intentional

A small suggestion to aid attackers on this map, once they get onto the wall it would be nice to have an option to slide a ramp or something to allow easier access from A. Although that might be overkill with how easy it is for this castle to be breached.

Hey Mabons, thanks for suggestion. But as you mentioned, I believe it would be really hard for defenders to handle first attack wave.

Thank you for feedback everyone.

Remove G flag form open fields. You will lose to every single faction that goes for cav spam. 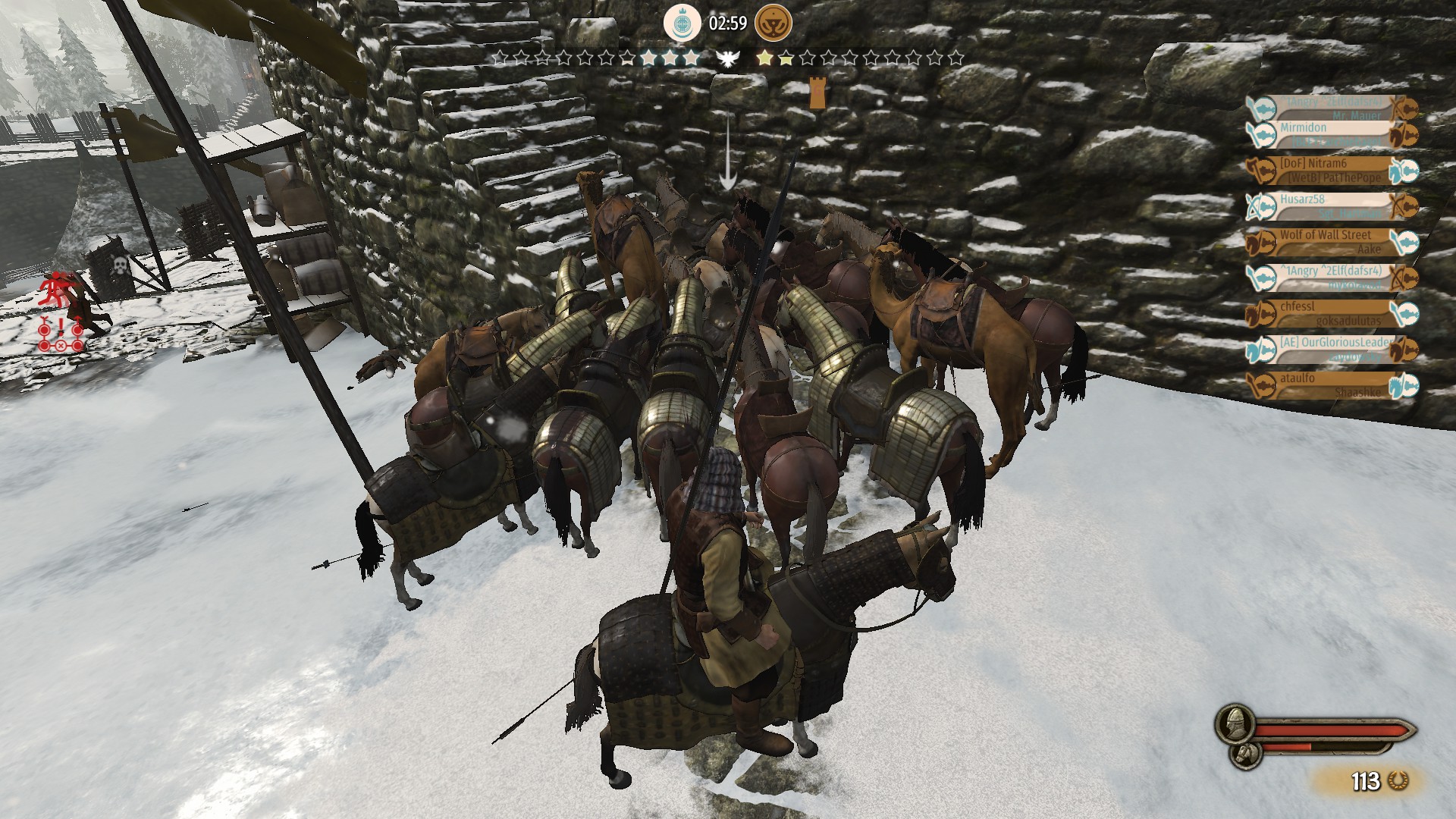 horses are trying to get up the stairs to escape, but they can't

this is near G flag, the stairs leading up to F flag

XDaron said:
horses are trying to get up the stairs to escape, but they can't
Click to expand...

I have mixed feelings about this map. Cosmetically it is definitely the greatest looking castle of the siege maps, just like its the case with all battanian castles in SP as well.

The gameplay in this map can be split into 3 different phases, 2 of which are somewhat enjoyable, and 1 of which is the most cancerous experience imaginable in Bannerlord MP.

Phase 1 : Destroying the main gate and the side entrance

This part is somewhat enjoyable. The biggest issue i have with this phase is the fact that defenders have a pathway in the mountains to allow cavalry riders to instantly join the battlefield and go annoy the attackers. The general idea of intentionally favor the cavalry, wether its attackers or defenders, have no business in siege. This mountain pathway is in my opinion the biggest offender imaginable. Defending Cavs should have to use the main gate to get out, taking the risk of opening it.

Phase 2 : Infantry battle inside the castle

This is by far the best part of this siege battle. The part where we fight on the walls getting the C-D-E flags. This part is very infantry oriented, which is the very nature of the siege mode itself. Cavalry are non-existant during this phase, fights are often happening inside which prevents archers from shooting in the inf (there are still some instances where archers are very useful in this phase). Overall, phase 2 of this castle is what siege mode is all about.

Phase 3 : The most cancerous experience imaginable in Bannerlord

F and G point start getting swarmed on simultaneously, but its really at the G point that the siege aspect of this mode gets flushed down the drain and replaced with a massive cavalry battle that is just so toxic, annoying, cancerous and overall ridiculous that most of the time i personnally stop playing at that point and wait for the game to end to join the next one. Everything in this last part favors Cavalry in a mode in which, arguably, there should be NONE to be seen. A big ramp to allow cav, plain and easy to maneuver zone allowing the cavalry to do whatever they want. We get charged from every directions while being shot from archers, there is no skill require for this part, its just pure randomness, you keep swinging left and right because you cant see ****, all you see are horses sticking to your camera, and every time you try a swing, your swing collides with a horse. The game becomes literally unplayable by that time.

This map needs to be made ANTI-cavalry. Remove the ramp, remove the hole in the mountain, make the cavalry unable to maneuver inside the castle. Playing cavalry in siege modes needs to be FILLED with so many disadvantages that only people with great courage try it.
You must log in or register to reply here.