I've never lost a battle with them, but somehow the progress shows `-100/100` and their kingdom shows 2,359,885 power. They do not have any armies, and their only noble left alive is the emperor who is sitting in a Battainian-owned city but doesn't show as a party in the city. 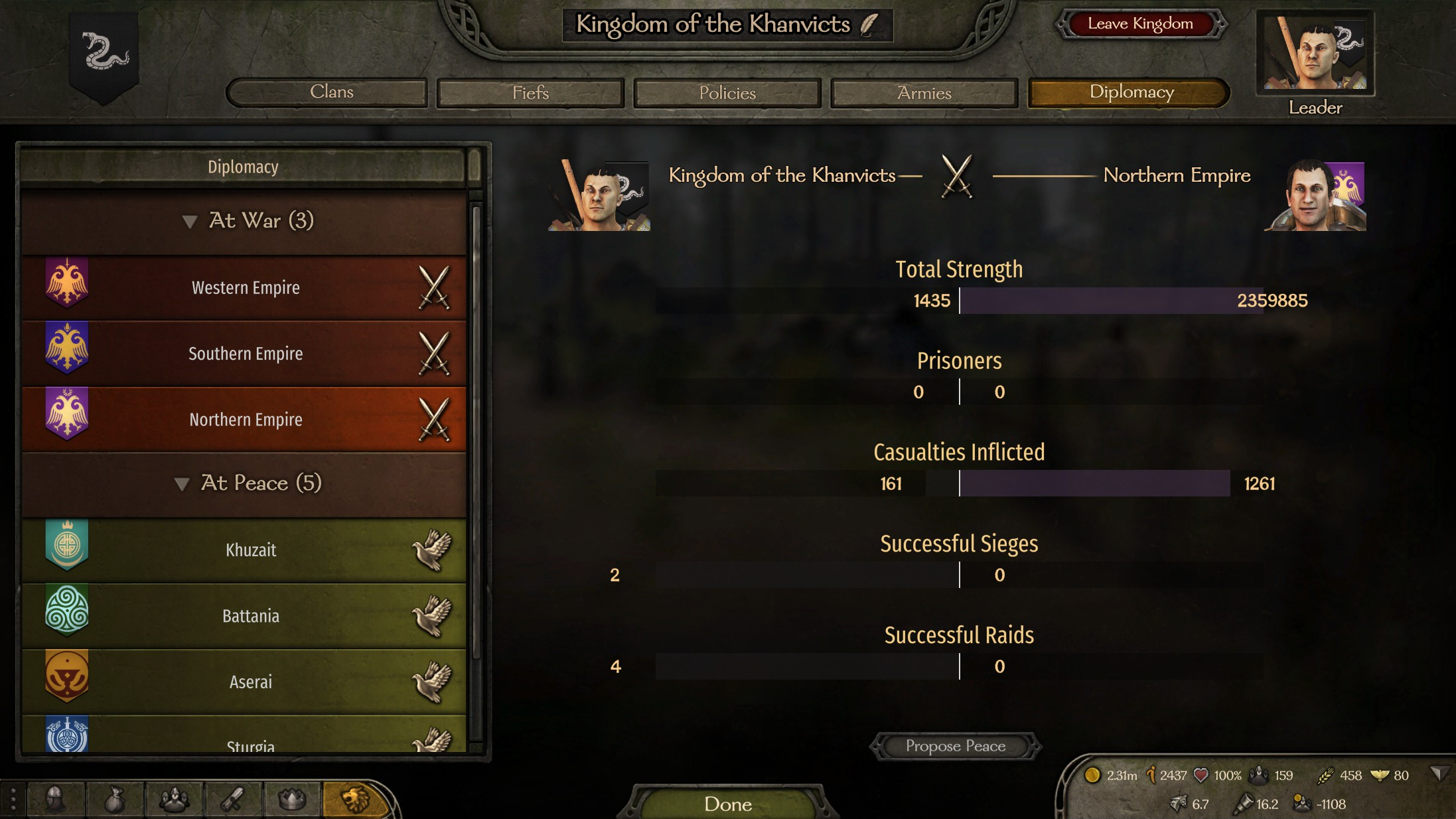 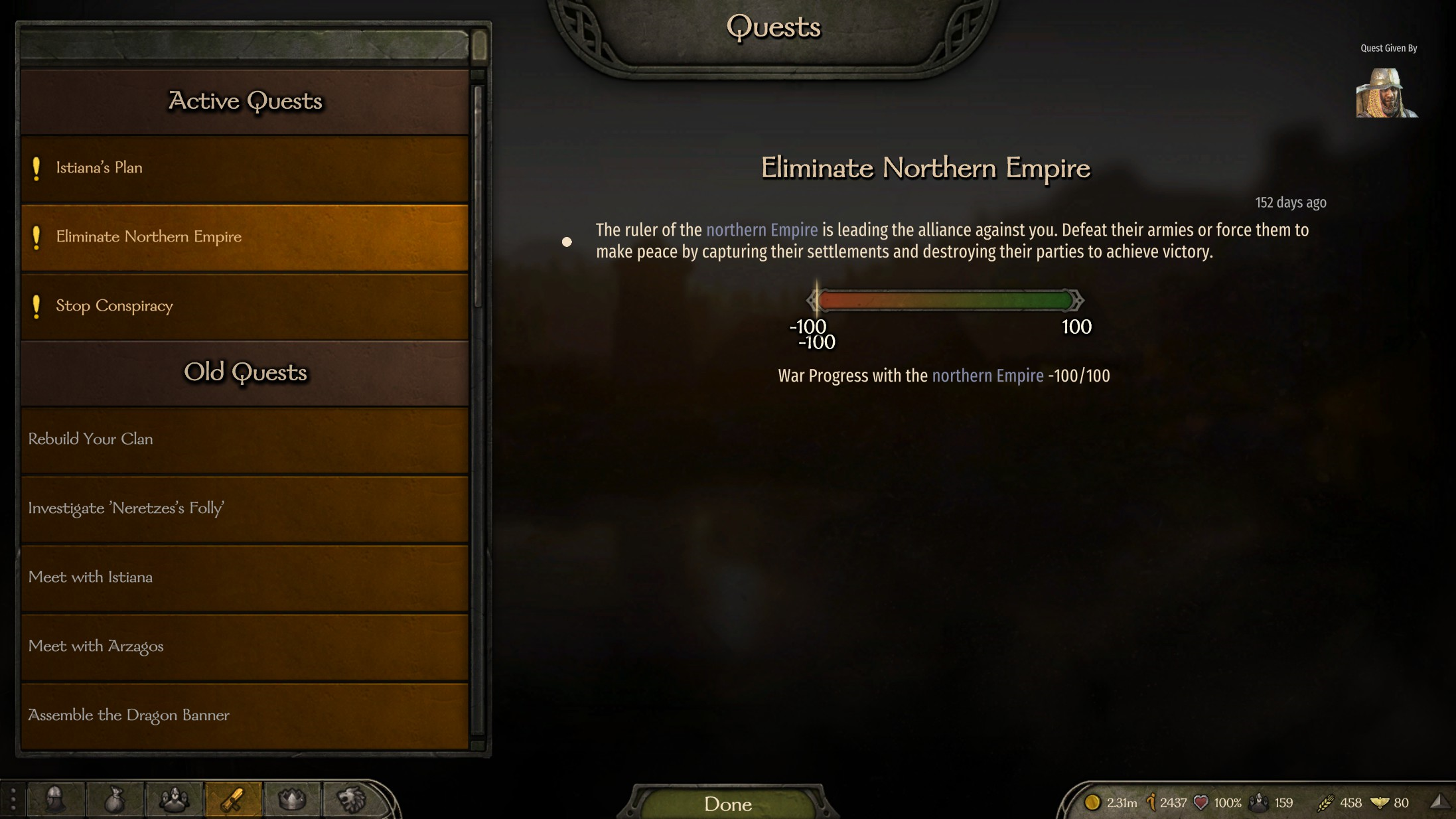 I noticed that this occurs when another AI Kingdm has wiped them out.
Basically;
This results in a 3/4 possibility that fief alternations result in lost progress. The only counteraction to that is that each successful attack against that faction results in a larger positive progress gain, and a smaller negative progress loss when further alterations are made.

In this case, you simply need to await the faction to leave the Battanian town, and kill them when they do.

Hi iimstevo. They don't actually have a party that's present in the town. I only know he's there because it says "last seen in Epicrotea today" on his hero encyclopedia page. He'll never leave since he's not "real" according to the game. Waited several in-game weeks just to see, but no dice. Good suggestion though.

I have a similar thing with western empire. They are the only remaining empire faction in my game, they have no fiefs remaining, just a bunch of destitute lords milling about getting captured from time to time. Strength is not bugged like in your screenshot, it's low like it should be. But they won't give up for some reason no matter how many times I defeat their tiny parties. Same thing with Sturgia, they have been completely wiped off the map but refuse to give up.

Similar issue here: https://forums.taleworlds.com/index...ire-factions-quest-issue.414532/#post-9401300
I wonder if the cause is the same for both issues.

Hello, i have informed the devs about the issue. Thank you for reporting it in.

Are you still having the same problem on our current build?

Just checked - I stopped to play that campaign on 11. Nov because of the bug and kept a save file in case someone needs it. Versions are still 1.5.3..

1.5.4. seems to run smooth, I managed to destroy the empire once, but in that campaign no realm was wept out such early than in previous versions - i think the bug was caused by realms being destroyed before player even started the quest.

I have the same issue.

I started the Campaign and stopped after rescuing my family. I was tired from previous games running around trying to find 10 Leaders to fill me in on the last big war deal. Then going to the two others to put the flag together (which never showed up anyway).

So I hopped right in and started taking Empire castles and Towns.. I wiped out the Southern Kingdom but their Lords are still running around. Every so often I'll find one.. try to run them down and wipe them out and capture them. I even see Bandit parties capture one of them. I'll be at war with them forever. A Lord will escape the prison.. and rinse and repeat.

It must be about skipping the main Quest.

EDIT: I haven't tried executing the Lords as it seems dirty.. plus I want to recruit them into my Kingdom. (which it seems I can't).

Yeah if they have nothing left the only way to get rid of them I think at the moment is to either wait for them to die, or to execute their remaining lords.

Ganeic said:
Yeah if they have nothing left the only way to get rid of them I think at the moment is to either wait for them to die, or to execute their remaining lords.
Click to expand...

Good idea, but: In my case (link quoted above) the fraction leader sat in another fractions town, with an army of 1+277w that never healed, therefore he never left the town and couldn't be captured for execution. And as he was the son of the beginning NE leader, he wouldn't die that fast, besides the fact he had an army of children...

The 1+277w army seems to be caused by a different bug, in my 1.5.4 game yesterday I encountered a hostile marked minor clan army of 1 - the leader. I attacked it, easy win. Afterwards I had 40+ liberated soldiers and 200+ prisoners. It seems that under some circumstances NPC armies don't heal

AI Parties completely starve when I call them to join army

Limit on how many mercenaries a kingdom can have.