1. Tournament format is 1v1, first to seven (ft7)
1.1 Any Polearms, two-handed or one-handed weapons are allowed as long as a shield is not used
1.2 Any weapon with the "crush through block" feature is not allowed
1.3 You can only play as infantry; playing as archer or cavalry is not allowed
1.4 Gold should be at 10000 so that you can use your weapon of choice
1.5 The default armour must be used
1.6 You are allowed to pick up your opponent's weapon
1.7 You are allowed to swap faction (to get a different weapon) during your ft7, but abusing this to delay the duel will result in a default win for the other player
1.8 This is a group-stage tournament; each player will be put into a group of 4 people at the end of the signup period. From each group the top two players will advance into a single-elimination bracket
1.9 Deadlines will be posted in the thread and must be followed
2.0 You are expected to complete your duel by the end of the deadline
2.1 You are to either present a screenshot or confirmation from both sides as proof of your victory
2.2 Leaving in the middle of a duel is strictly forbidden unless there is a valid, demonstrable reason for doing so
2.3 If there is a need for an extension you must contact one of the admins first

- Tournament rules and Sign up rules are borrowed from Gibby's Champions Cup; all credit goes to him. Rules are very well written with a good format and the same rules will apply for this tournament.

Sign Up Rules:
1. As with the Champions Cup, you have to provide your steam contact when applying, so your opponent can get in contact with you
1.1 You cannot let someone else play as you when you have to fight (If we get a complaint, there will be ID checks)
1.2 If you fail to contact your opponent, you should contact one of the admins for them to look into the case. And if they fail to contact/find an agreement with this person as well, a default win will be given to you
1.3 There is no limit to the amount of players that can sign up, but each person may only sign up once
1.4 There are no server restrictions, so you can play your duels on any server you want. If one of your opponent is not able to get a low ping on any duel server, contact an admin and we will sort out a server. The default servers for duels are The_Ludus


Code:
Administrators of the tournament:

Important matches from quarterfinals moving forward will be stream on Shin's twitch channel: shin_warband - we will try and create a good streaming environment for any player interested in watching great players duelling. Streaming ideas may be discussed. Any suprise showing from Mr. Kamby or Busby himself could potentially happen, pitching in as an elite and exclusive group of duel casting experts.
Furthermore, The_Ludus has suffered from several DDoS attacks while hosting special Duelling events by Shin. If DDoS attacks occurs while the tournament is on-going, contact me or Shin, and we will investigate. I have been in contact with other server hosts. If The_Ludus goes down, I will open another private server which will not be disclosed for anyone besides the admins to prevent any further DDoS attacks ruining the tournament.

This tournament is created in the hopes of making a fun and competitive environment from an old game we all love. The tournament is to be taken very seriously. With that said, ANY toxic behaviour will not be tolerated and you will be disqualified from the tournament immediatly. All prize money comes from my own job as a Paramedic, and i will not accept any player attempting to taint or ruin a fun duelling event.
I hope this tournament will bring back old players who are lacking competition or fun in Bannerlord.

Tournament limit will start at 64 players; which will fill up 16 brackets. Any sign-ups past deadline will be put on the reserve list. From here you will be contacted if any dropouts occur.

Thanks to Gibby for creating an awesome and comprehensive list of rules. 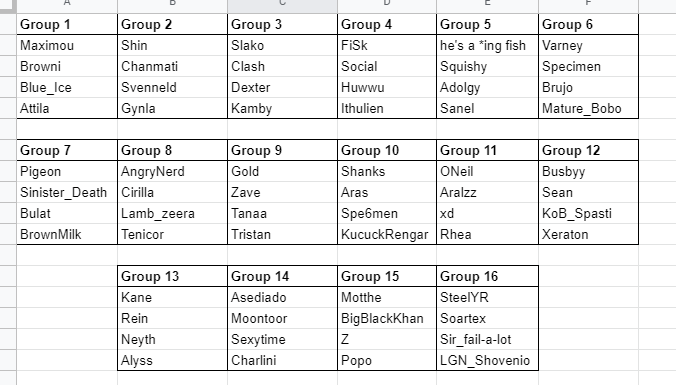 A full list of participants with links i will post tommorow. I have been swarmed with personal stuff today, so i didnt have the time.
Check the latest posts under this thread for first deadline and first matches. If you wish to fight tonight, find the players post and add him from there. Good fights to all of you.
Last edited: Mar 23, 2021

that is very epic title mr kamby. but I assure you that the photo was photoshopped

I hope the signups/tourney doesnt take that long otherwise i have to drop out :C

2nd
You must log in or register to reply here.