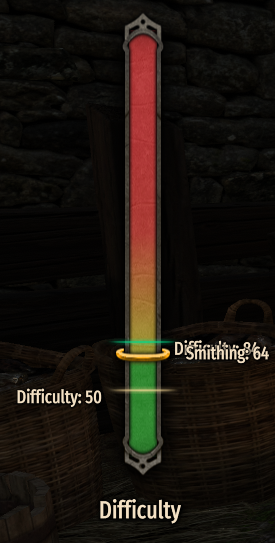 2) Make it default to show only unlocked pieces as the locked parts don't really matter. This may confuse new players though so it could be better to save the state of the crafting piece filter.

3) Similar to the civilian icon for the blades; add a bastard usage, spear bracing, couching, and a throwable icon for the appropriate handles and a dismounting icon for appropriate guards. I would understand if the handles get rejected as they are different usages and not an attribute like CanDismount.

4) For the hooked guards that can dismount, have an icon next to the civilian icon as it's not a usage unlike the others but an attribute. (It also makes sense to have it on inventory item tooltips as well.)

5) Category name "Two-Handed Polearm" is a bit misleading as it also covers one-handed ones as well. Maybe that can be changed.

6) There is a "bonus against shields" icon for this single javelin blade. This icon doesn't appear on axes even though it's an attribute for every single one of them. Is this intended?

7) Hide inferior refining formulas as they only provide clutter.

I'm sure you are aware of most of this but I wanted to list them anyways.

2) Maybe, maybe not. On the one hand, I'd personally want players to click on those locked items to see the possibilities in the system. See what kind of cool weapons they can make if they unlock those pieces. Hiding those by default would hinder that. But I also see your point, for normal users, locked items don't really mean much. I'll bring it up internally for discussion.

3) "bastard usage, spear bracing, couching, and a throwable" I'm not sure about those since they also show up in the usages. But It would also help, before selecting an item to see if it has multiple uses or not. I'll bring it up.

4) I think they're on the inventory tooltip but not on crafting. Makes sense, I'll take a note.

5) I think a change on that front is already planned but I'll double check.

6) I'll check it out, if it has a bonus It should have the icon.