[BUGS] - A place to report bugs to prevent duplicate posts

Bug: wrong stats?
tier 4 khuzait archer has one handed skill of 90 but for some reason tier 5 khuzait marksman one handed is only 80. Shouldnt it go up with upgrade?

Crash on dialogue
Opening a dialogue with anyone
So far it's had an approximate 90% chance of happening
So far I've only managed to reach radagos hidout in the tutorial stage and I've had consistent crashes when character creation is done and you first get to talk with the brother (literally, finished creating character, loads into game, sees brother and crash), then again trying to talk to random villagers in the tutorial village (can't talk to them since I'm in tutorial mode, but if I attempt to there's a high chance of crashing) and then also when talking to the village chief, and then again when I've killed all enemies at radagos hideout and are met with whom I assume to be radagos (don't really know since as soon as he tries talking to me I crash instantly)

And when I say "crash" I mean HARD crash. It completely restarts my computer, and I can't find any performance issues on my computers part, but what do I know, maybe I'm missing something. This is the only game I've ever had a problem with, running anything from total war: warhammer II, terraria, crysis 3, rainbow 6: siege or dota 2

Hi all, just wanted to know if troops are supposed to level up much better through auto-resolve than through battles fought manually. Is this a bug? Thanks

Bug Description:
NPC 3D Character Model Bug, at first i thought my save file got corrupted so i made a new campaign savefile and the bug persist.
I already tried to verify gamefiles but the bug is still there.

How To Reproduce The Bug:
Noticed it after 1.0.2 patch

NPC Name:
Most of them are from battania including their faction leader "Caladog"

I got a freeze today when a siege weapon was about to get destroyed. In the middle of the animation it just froze.

Edit: maybe its just the battle in Sargoth that keeps freezing. Cant determine the exact cause.
Last edited: Apr 2, 2020

Bug Description: Joined Battania, cheats active. Captured a City and a Castle with kings retinue - now the voting starts. With cheats ACTIVE, game crashes with the notification, with cheats DEACTIVATED, game crashes after the vote is decided. Either way, game is not playable afterwards.
How To Reproduce The Bug: Cheats on, join kingdom, get to the point of voting for a fief. Maybe also without cheats?
How Often The Bug Occurs: With and without cheats
Quest Name:
NPC Name: Caladog
Save Playtime(How long you've played that save/What day you're on): About 8 hours

Bug Description: Cheat Menu on - Inventory. After about 3 hours, whenever opening the inventory and getting the "take whatever you want" menu provided by the cheat menu, game crashes after closing the inventory. Also, heavy lag. Save is broken (because of this?) and every time I open the inventory (even to trade, so without cheat menu) the game crashes - save unplayable. Started happening the first time after pressing C while walking through town and trying to change clothes.
How To Reproduce The Bug: Cheats on, use inventory when not trading - lag. Cheats on, use inventory while walking through town = crash and unplayable save
How Often The Bug Occurs: After triggered once, the save is broken.
Quest Name:
NPC Name:
Save Playtime(How long you've played that save/What day you're on): 3 hours
Screenshot(s):
Video(s):

Bug Description: During Army of Poachers quest, all the Poachers are small children, making them very difficult to see or hit (especially since they can see and shoot through an orchard where I can't see them). This bug also occurs if you choose to talk to the Poachers, they're also children in that case too.
How To Reproduce The Bug: investigate the village at midnight while on army of Poachers quest
How Often The Bug Occurs: both times I attempted it
Quest Name: Army of Poachers
NPC Name: forgot
Save Playtime(How long you've played that save/What day you're on): day 25 or so

Yet another typo (paid), this time on the "Crown Duty" Kingdom Decision.

Bug Description: Everytime I try exiting the tavern of any city the loading screen is never ending.
How To Reproduce The Bug: Exiting the tavern
How Often The Bug Occurs: Every time I leave the tavern
Quest Name: n/a
NPC Name: n/a
Save Playtime(How long you've played that save/What day you're on): 98
Screenshot(s):
Video(s):

Some perks don't stay chosen after loading the game. Bow and Smithing don't stay, but others do.

Bug Description: When intercepting an enemy siege of a castle or town, nothing can happen in the battle. You are stuck inside the castle with all troops and the enemies cannot get inside as they will have no siege weapons or ladders.
How To Reproduce The Bug: When an enemy is besieging a town or castle, attack their siege camp.
How Often The Bug Occurs:
Every time without fail
Quest Name: N/A
NPC Name: N/A
Save Playtime(How long you've played that save/What day you're on): Happens any time

A few bugs i found in my first few days of playing:

Talking to your brother from the party menu before you enter Radagos's hideout, lets you choose a banner and family name. then, after you will finish the mission he will repeat the dialog and make you choose again.

In the Battanian sheep and wolfs game you can reach a draw, when the white cant move and its his turn, in this case the only thing you can do is forfeit the game.

If you ask a villager to lead you to someone and you reach him before the villager and engage in conversation, the village will open another conversation to tell you you have arrived and crash the game.

while taking the Spy in the city quest from a lady, talking to one of my companions in the town center seemed to crash my game, it happened twice so im preety sure you can recreate this consistently.

The "Escort Merchant Caravan" quest is fairly easy to break, I explain below how and what the devs can do to fix it:


So, to begin, how is the Quest structured?
The player is supposed to escort the Caravan to two towns, at which point he receives a gold reward. Sounds simple enough. But what happens when the player doesn't stick to the caravan?

The moment the player loses sight of the caravan, he receives this message:

This is followed by a garanteed attack on the caravan within a day. I tested this a lot of times and this attack happened every time, about a day afterwards. I assume this is a scripted encounter, because the group attacking the caravan isn't "looters" or "mountain bandits", just "bandits". The player is specifically informed about this attack on the world map too:

If the caravan is wiped, the player loses standing with the questgiver, nothing special yet.
I don't particularely care that this seems scripted either, I'm not expecting every aspect of Bannerlord to be a perfectly emergent sandbox. This is where the issues I have with the Quest start though:
The caravan is not garanteed to be wiped. There is a good chance that the caravan survives and just keeps wandering around the world map independent of the player.
At this point, the quest runs endlessly until the player finds the caravan again, which is hilariously tedious. Not only that, but since the player can't accept any other mission of the same type he is literally LOCKED OUT from other caravan quests, until completing this one. It doesn't seem like any of the normal roaming bandit groups stand a chance at killing the caravan on their own either. Issues such as this are made even worse without the ability to cancel quests.

To sum up the issues with the Quest up to this point:

Things don't get better here though.
In the case that the player loses the caravan and it survives the scripted attack (which happens very often in my experience so far. This happening the very first time to me is why I playtested this further) the best course of action is to just camp the origin town. The mission scripting seems to only check whether the player is in proximity to the caravan when entering any town. just staying at the origin town is the best course of action to work around this, but a new player might not think of this when it happens to them. Besides, just resting at the origin town obviously has little to do with escorting the caravan 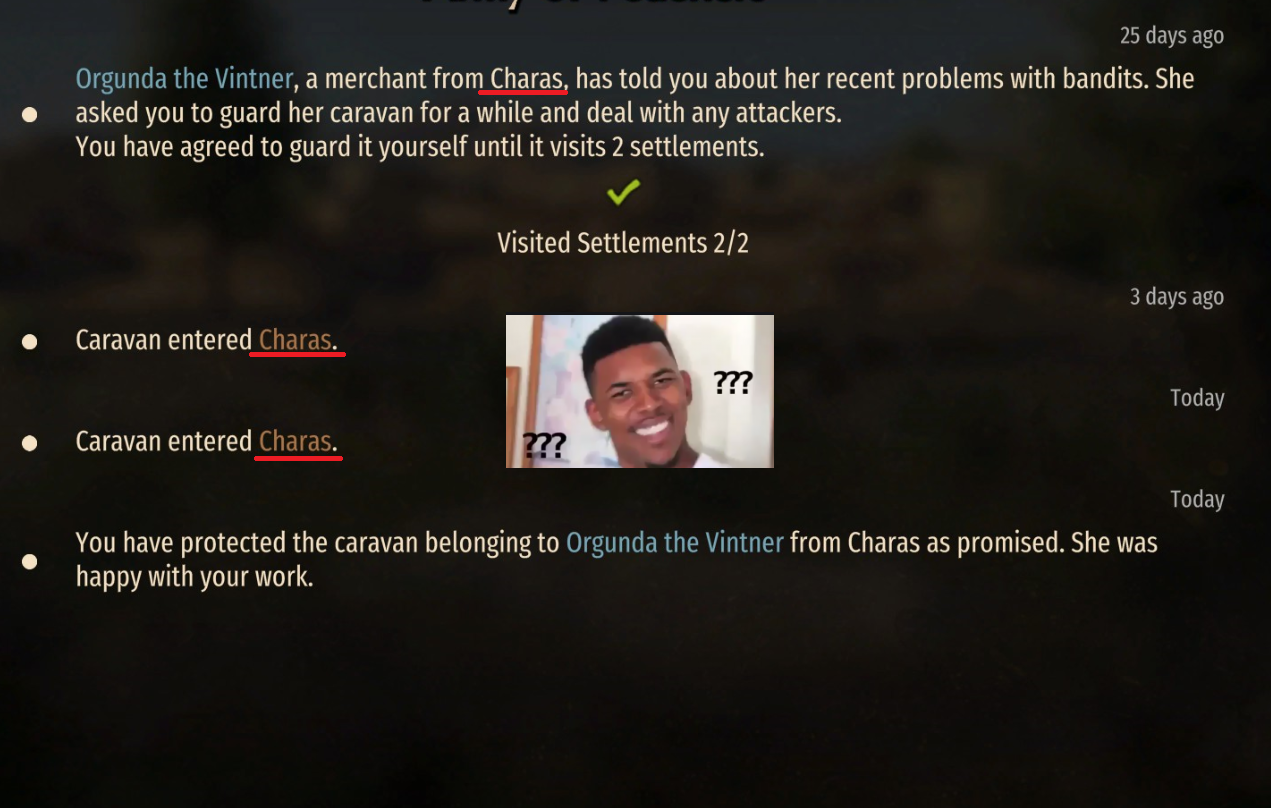 My impression is that the design intention here is that the scripted first attack isn't survived, and thus these problems with the quest design wouldn't happen or show themselves in the first place.

On an unrelated note: it seems like quests cancel when a town is captured by a different faction: BUT THIS ALSO LOCKS YOU OUT of taking the same mission type again, pretty gamebreaking aswell 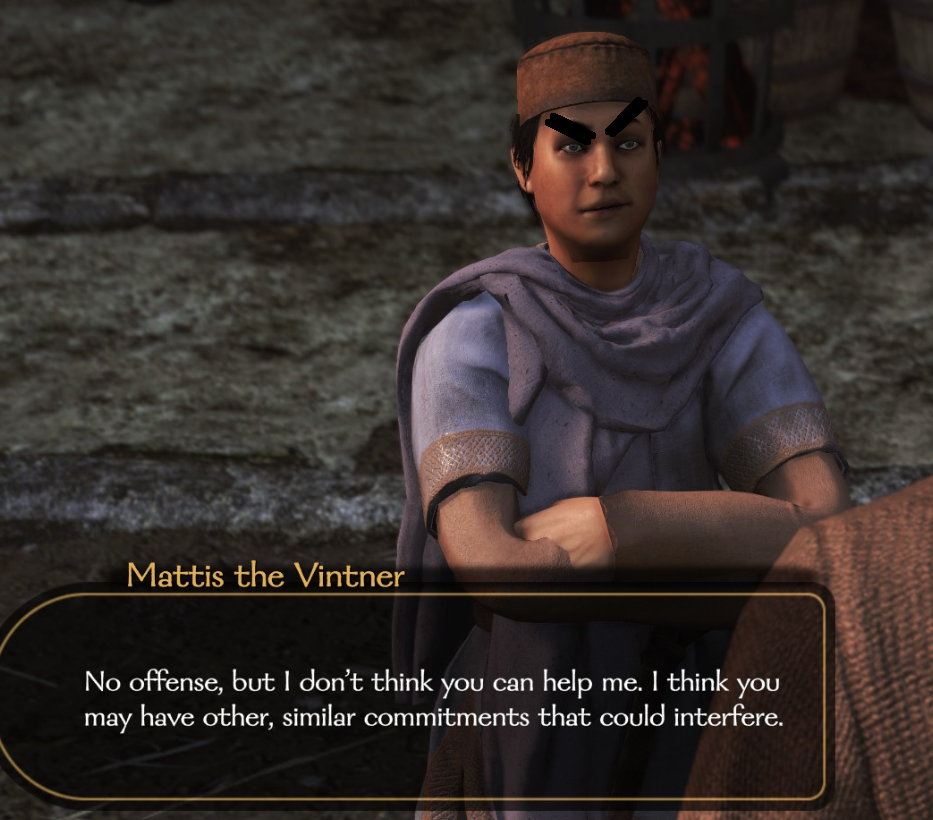 World map: Player can walk through big rock and waterfall near Swenryn village.

Currently i have almost 30 million Denars, i am however only making about 4k a day, and i have made this in a short span of time. I am unaware of what i did to start making this, so i don't know how to duplicate it.

Spawning into an area in first person has me see the inside of my own face. It doesnt do this if i switch to third then back to first person however, only if I was in first-person in the previous loaded area.

EDIT: also occurs when doing the practice fights ie: going from in the pit to back to the pitmaster.

there's a bug with the "Escort Caravan Quest", you cannot help or interfere when the caravan you're supposed to guard got raided/battle by a noble from a minor faction which have a neutral relation with you

A horse was climbing a ladder! Nuff said.