Yeah, I agree, and I've always wondered about the name myself.

It's certainly not the last age of knights, in fact, the era of evolved knights had barely begun in 1460.

Anyway, seems they abandoned the work on the mod, because War of the Roses is coming out, a game of questionable modability. Nonsense I say.

Still, the mod has loads of content and is in a pretty playable state. I suggest downloading if you already didn't.

Well my opinion is, as there are more than few slavic speakers involved in majority of work on this mod, maybe the name came from distorted translation in translator or something similar.  But theres nothing to back this up.

The name itself is appropriate and not at the same, it depends from which angle you see  it.  As was already mentioned time since lets say 1445 (institution of french lances fournies) actually saw knightly cavalry at its best, fighting in disciplined formation (at least in France), but in general history the dogma is that infantry became dominant since 14th century, while knightly heavy cavalry dominated since battle of Adrianople untill few battles in 14th century in which well placed infantry was able to cripple knights several times. In this mod the its maybe mostly the topic of glorified swiss.

Yet in reality it was much more complex, well ordered cavalry charge was able to defeat infantry in any era, on the other hand well placed infantry was able to withstand most cavalry in any era as well. Swiss specifically rather got lucky against burgundians (in context of army of Charles the Bold, which was combined arms force very advanced on its age) than anything else and with the exception of Grandson, where they were almost defeated, they were allways just one part of an army at both Morat and Nancy supported by substantial number of cavalry themselves supported by their allies.

Hynek z Děčína said:
Version 2.3 is constantly showing me the error of missing textures and the game crashes
Click to expand...

When I upgraded the game to version 1.153, the mode works without problems.

Only minor issue: What about some good flat large plains map for one of custom battle maps. I really like to fight some quick battle from time to time, but maps there are quite small and too messy. Campaign is one huge siege mostly, with few precious battles, Id say its good to have some map that allows for nice pitched battle in custom.

I absolutely. I wonder why the devs of the vanilla did not add that.

Anyway you are right, the campaign maps are often small and full of vegetation, in contrast to open. I don't know why, but it happens only in this mod. It needs fixing, though I doubt that will happen.

You mean your game crashes? What does the error log say?

Also, you may as well update to the latest version, it doesn't affect Knights the last battle in any way.

Seems a bit like there's no decent/playable late middle ages mod out there, with this here and HYW both on hiatus...?!

This one is very playable and has a lot of content.

HYW is also in a very playable state.

This mod barely ever crashes. It is negligable.(at least from my experiences.)

YourStepDad said:
You mean your game crashes? What does the error log say?

Also, you may as well update to the latest version, it doesn't affect Knights the last battle in any way.
Click to expand...

Sometimes, just game crashes, and error log don't appeard. Sometimes game just stop.
And can someone give me newest version?

Go to the main page of taleworlds and click Warband<Downloads

I would link it here but it's impossible.

YourStepDad said:
Go to the main page of taleworlds and click Warband<Downloads

I would link it here but it's impossible.
Click to expand...

Where exactly is it?

YourStepDad said:
Go to the main page of taleworlds and click Warband<Downloads

I would link it here but it's impossible.
Click to expand... 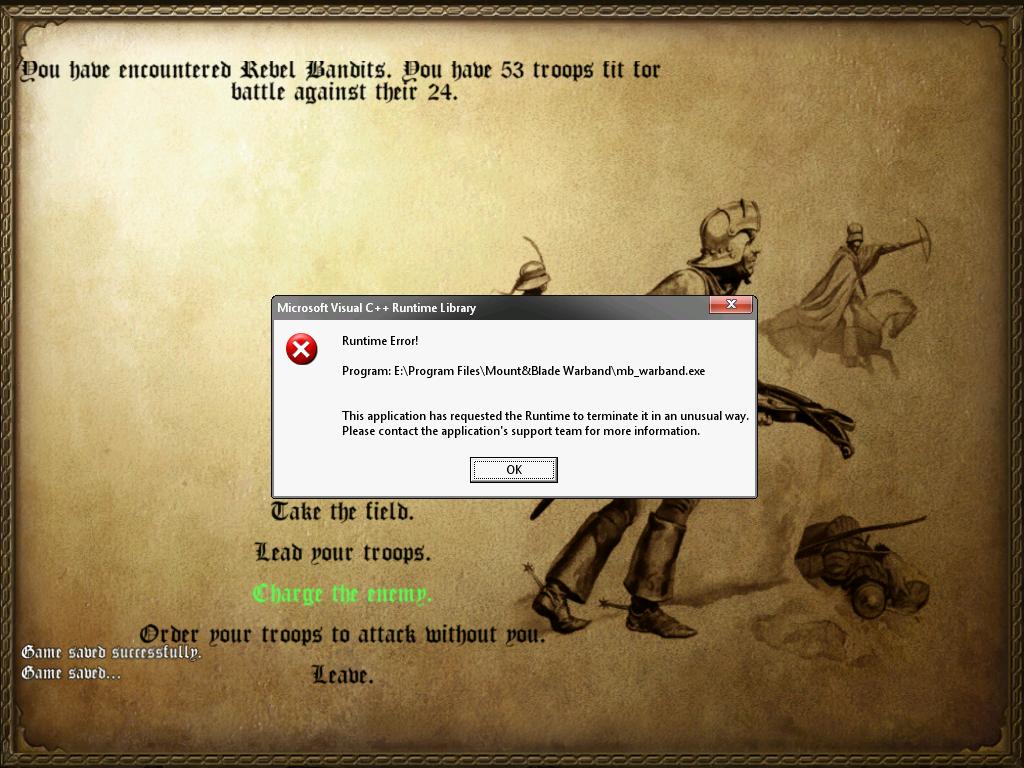 Have this bug. Look for newest version of mod, if don't have bug enymore I edit my post.

Glad to see you here, but why are you thanking me?

Great mod, but has two irritating bug groups:
Arrows, bolts and legwear just gone from all shops in all towns. They where there initialy, but then gone and I can't buy any more
Mistakes in weapon and armor names. One-handed sword called thwo-handed, red armor called green and more...