I don't know who you're supposed to give it to, so you can probably just give it to yourself.

*EDIT* Guys I think I broke Pixel. In delegating my difficult primary and secondary choice I think I also transferred my indecisiveness and now I think I can see him start to emit smoke and sparks. Please keep your distance.

Who knew picking Baby Aztecs w/ Bits Of Maya vs. Lots Of Trade But Little Info was such a tough choice?

Previous BoP Experience: Lots, mostly from other forums. Never played in taleworlds, because I saw most of the rp's dead and quite slow to my taste. I have been playing Nation Roleplays for quite a while now and I am quite interested in this game. Interested enough to make an account to play :v

Previous Mesoamerican Experience: Well little being honest, I am more acquainted with the Andean cultures given that I am Peruvian.

If you catch this before the forum goes down for the transfer, cards are out.

Well welcome to the new forum I guess.
I'd like to welcome Murtox as Zacatollan and Ivelios (who signed up through discord) as Yopitzinco. Here is an updated player map: 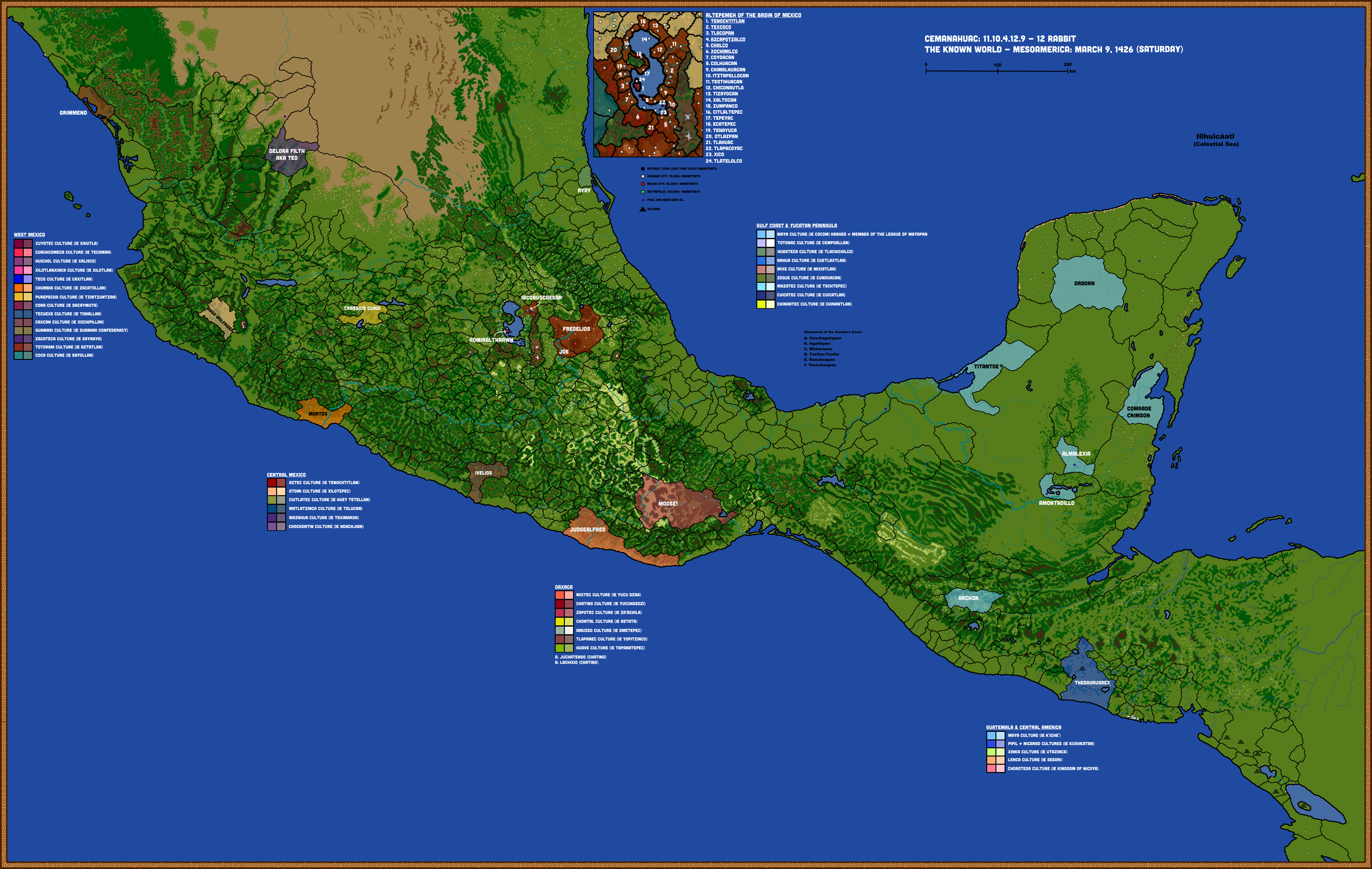 As mentioned, all cards are out. Have been for a week actually but ykno, forum down.
One silver lining of all this is I have decided that a whole post dedicated to mechanics in the OP can be made obsolete by this google doc: https://docs.google.com/document/d/1oVkn-DSA6GNZteZt3iOvnwCkA_wb2SKNaejlH8H_5N4/edit?usp=sharing
this is easier for me to keep up-to-date and I encourage you to look around here before asking me too many questions.

Pixel said:
I encourage you to look around here before asking me too many questions.
Click to expand...

Ok here is what i proposed, everything mechanic-wise is just my proposal and obviously subject to change by the host.
Each turn there will be the mesoamerican ballgame championship habbening. The first championship will be hosted by Tzintzuntzan, afterwards the champion of last turn will have the honor of being the new host.
For the host, this will provide a bit of money from travellers (maybe offset a bit by the cost of hosting the guest teams, so you gotta invest a bit first but get profit out of it after the turn), and happiness for the people for all the exciting games being played. The bonuses scale with the size of your ballcourt.
For the participating players, the results depend on their performance. Performing bad means losing some authority and maybe happiness, Performing well means gaining some. The winner ofc gains most, and gets to host the next championship and the related passive benefits.

Performance in the championship would depend on a few factors (ultimately up to pixel ofc): Size of your own ballcourt + maybe noble happiness divided by 10 (happy nobles play more ballgame instead of plotting against the ruler ) or army professionalism as skill? or both or smth else? + random d6. Maybe also a malus for your team's performance if you have a military campaign ongoing because players are busy, some have to be replaced by non-combatant players of lesser skill etc.

Yes, there'll be a ballgame championship every month. Evidently Curio here had posted without seeing that I had basically approved the idea in the google doc thusly:

You know how some BoPs set in modern times have the Olympics? Why not do that, but in Mesoamerica! And only one sport: the ballgame. Sometimes called pokatok, tlachtli, or ulama, the game had a lot of spiritual and ritual significance - but it was also just played for fun, by commoners and nobles alike. It involves a bouncing rubber ball - a technology which exists nowhere else in the world - but the exact rules of play are thought to have varied and are perhaps different from modern variants of the game. It is known that players wore protective padding and could use any part of their body but their hands to manipulate the ball.

Anyway it happens that there will be a ballgame championship every turn, first hosted by Tzintzuntzan (Curio) and from then on to be hosted by the winner of the last tournament.

Hosting the tournament begets a cash boost from travelers and pilgrims, as well as a happiness boost for all lineages. These bonuses scale with the level of your Ballcourts.

For the players, the results depend on your performance. Doing badly means maybe losing authority*, happiness, and prestige, performing well however means gaining some. The winner of course gets the most of these and goes on to host the next tournament with all the aforementioned benefits.

Performance in the tournament may depend on these factors (and possibly others): your own ballcourt level, your noble happiness, army professionalism, and some randomness.
Click to expand...

Also! I am announcing the deadline. It will be set for >>> FEBRUARY 8th <<<
Please be aware that I have no intentions of extending deadlines this BoP, as I believe that has contributed to BoP death in the past. A BoP host sets a deadline for a reason and has to strike while the iron is hot (aka while the hype and motivation is still there). This will be a hard lock. No exceptions.
Last edited: Jan 26, 2020

I know you did, fucker, but I wanted to do a public diplo announcement as the host and creator of the tournament, shitlord.

Also i wanted to brag about my cool idea dickweasel

I can see a rainbow, is it a good omen?

Yet, will everyone be allowed to participate in this event, even those who don't even know where Curio's city is? Will NPC nation send their squads too?

Don't be silly, everyone knows where glorious Tzintzuntzan is

(dunno about you guys but this rofl emoji looks more like screaming in pain)
And NPC stuff is up to pixel i guess, but i'd imagine it would be mostly if not only players.

Well there are pilgrims from NPC places coming to my holy sites, so I guess NPCs will show up for some ball game too.

(dunno about you guys but this rofl emoji looks more like screaming in pain)
Click to expand...

NPCs will not participate in the ballgames.

this is a callout. fukken tenochtitlan has never done anything for anyone. smh loooser. worst lake. even agaltepec is better.

I think at this point I missed out, but unfortunately I’ll have to drop. Work got a lot busier than I was expecting, and I just won’t have time to put as much effort as you all deserve. Look forward to following this though, have fun all!
You must log in or register to reply here.