This is a cross-post from the Flying Squirrel Entertainment forums. The original thread can be found here: https://www.fsegames.eu/forum/index.php?topic=39945.0

This is a reskin mini-mod that fixes some visible problems with the uniforms, banners etc. of the Russian faction that have been bothering me for years. I was originally only going to replace the weird peasant surgeon class that came with the recent content patch, but then decided to address other issues "while I'm here." Apart from the cossacks, uhlans and Marshal Kutuzov, which are fine, every Russian unit has been altered in some way to be more accurate to the uniforms worn in the 1812-1814 period.

-Almost all coats are given two parallel columns of six buttons in the centre, instead of seven that flare out for lapels at the shoulders.
-Regular army units are given open collars with cravats visible, the Guard units retain the closed collars.
-Specularity is applied to officer sashes and NCO galloon-tape on the collars and cuffs. NCO pompons are given two quadrants of orange and black and their plumes have an orange stripe instead of red.
-Simbirsk Infantry Regiment given green shoulder straps piped with red, and the drummer has some tape removed to coincide with being a regular company drummer. The wings have only four stripes.
-21st Jäger Regiment given dark green coats piped with red, instead of light green which they stopped wearing after 1807. The private Jäger wears a yellow pompon for the marksmen platoon of the 1st battalion. Their light blue straps are darkened slightly.
-Since the Jäger drummer must share his coat with the hornist, he has NCO distinctions: an extra chevron on the sleeve and bands of tape along all the coat seams.
-The St. Petersburg Militia has typos on its banner and cap badge fixed (mistaking Ъ for Ѣ). The officer is given a dark green frock (сюртук) with red facings instead of grey and light blue. The enlisted men continue to wear brown and grey.
-The Preobrazhenskiy Regiment of the Guard is given its 1800 banners, as the Georgian banners awarded for Kulm weren't received until after Paris.
-Since all the cavalry share the same standard, I changed the regiments so that they wouldn't conflict. The Kiev Dragoons are now the St. Petersburg; the Sumy Hussars are now the Pavlograd; and the Chevalier-Guard are now the Horse Regiment of the Guard. All three of these regiments carried green Georgian standards with white corners of the 1803 model awarded for various feats and with different inscriptions, but I've left off the inscriptions due to the low resolution of the texture anyway. The dragoons are virtually unchanged except that their buttons are brass and their collars and cuffs are less of a blindingly fluorescent pink. The Pavlograd Hussars have a dark green dolman and a turquoise pelisse with yellow buttons and red trim and cords for the enlisted ranks, yellow and gold for the officers. The Horse Guards differ only in having yellow metal and blue saddle clothes with red trim. As it stands, the Lithuanian Uhlans still have the wrong standard.
-The dragoons have cavalry cuffs with two superfluous buttons along the edge and a slit on the outside seam. Trumpeter has 8 chevrons on the sleeve and 5 stripes on the wings and the officer has his gorget removed. The Fahnenjunker has a stripe of galloon along the centre of the shoulder straps.
-The old reskin of the Pavlograd Hussars I made years ago has its officer skin updated for better accuracy - gold cords and a silver barrel-sash, and the Imperial coat of arms on the sabretache instead of the monogram. Weird specularity on the saddle is cleaned up.
-Cuirassier enlisted ranks have red piping along the seam between the shoulder and sleeve. The trumpeter's livery (yellow with red trim) is basically redrawn from scratch. The Junker has gallon on the shoulder like his dragoon counterpart.
-The surgeon now wears the uniform of a regimental "staff-doctor": a single breasted dark green coat, red piping and white buttons, with wavy silver button loops on the collar and cuff, a simple black bicorne with cockade, and riding trousers.
-The victory music for Russia (previously a rendition of Chanson de l'Oignon?) is replaced with an excerpt from an instrumental arrangement of The Thunder of Victory.

Things I would have liked to change but can't without ruining compatibility with vanilla NW servers:
-Creating separate shakos and coats for fifers so they can be grenadiers; there was no such thing as a musketeer or fusilier company fifer.
-Giving the Jäger hornists a "Waldhorn" (natural French horn) instead of the French postal horn and an NCO's pompon.
-Giving shakos to the officers of the Pavlovsk Grenadiers.
-Giving proper shoulder straps to the Pavlovsk Grenadier drummer and fifer (they share coats with the Simbirsk).
-Giving separate coats to the cossack NCO so he can have galloon on his collar and cuffs.
-Giving unique standards to all the cavalry regiments and adding white leib-standards akin to the infantry's.
-Giving the 1803 Cavalry Stutzer better accuracy, since it is supposed to be a rifle.
-Giving the surgeon a small sword/spadroon instead of the pioneer's saw-sword and a unique headgear so he doesn't share with the partisans (as it stands now, partisans will occasionally spawn with an officer's bicorne instead of an 1811 forage cap).
-Giving the artillery a separate horse with unique saddle cloth. 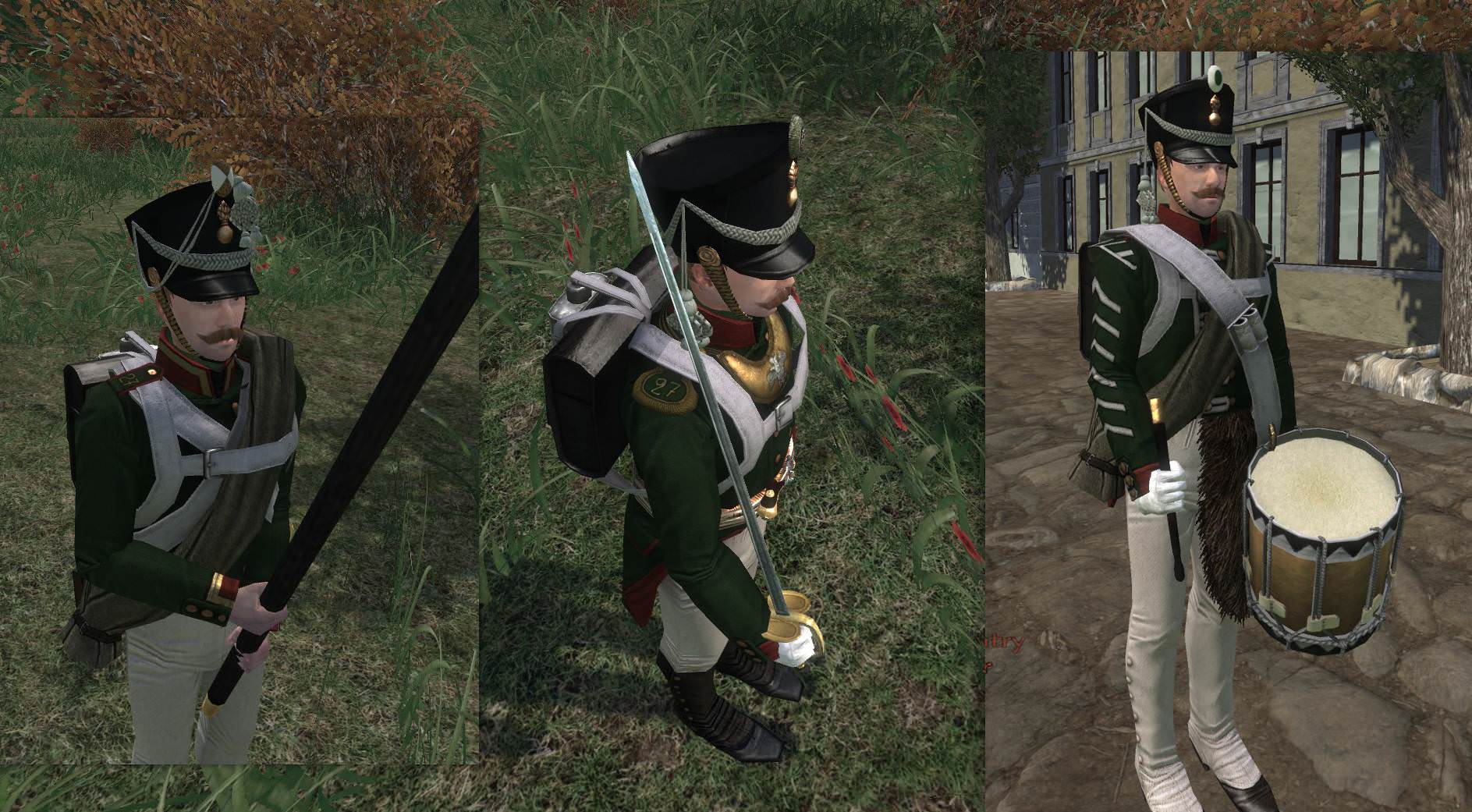 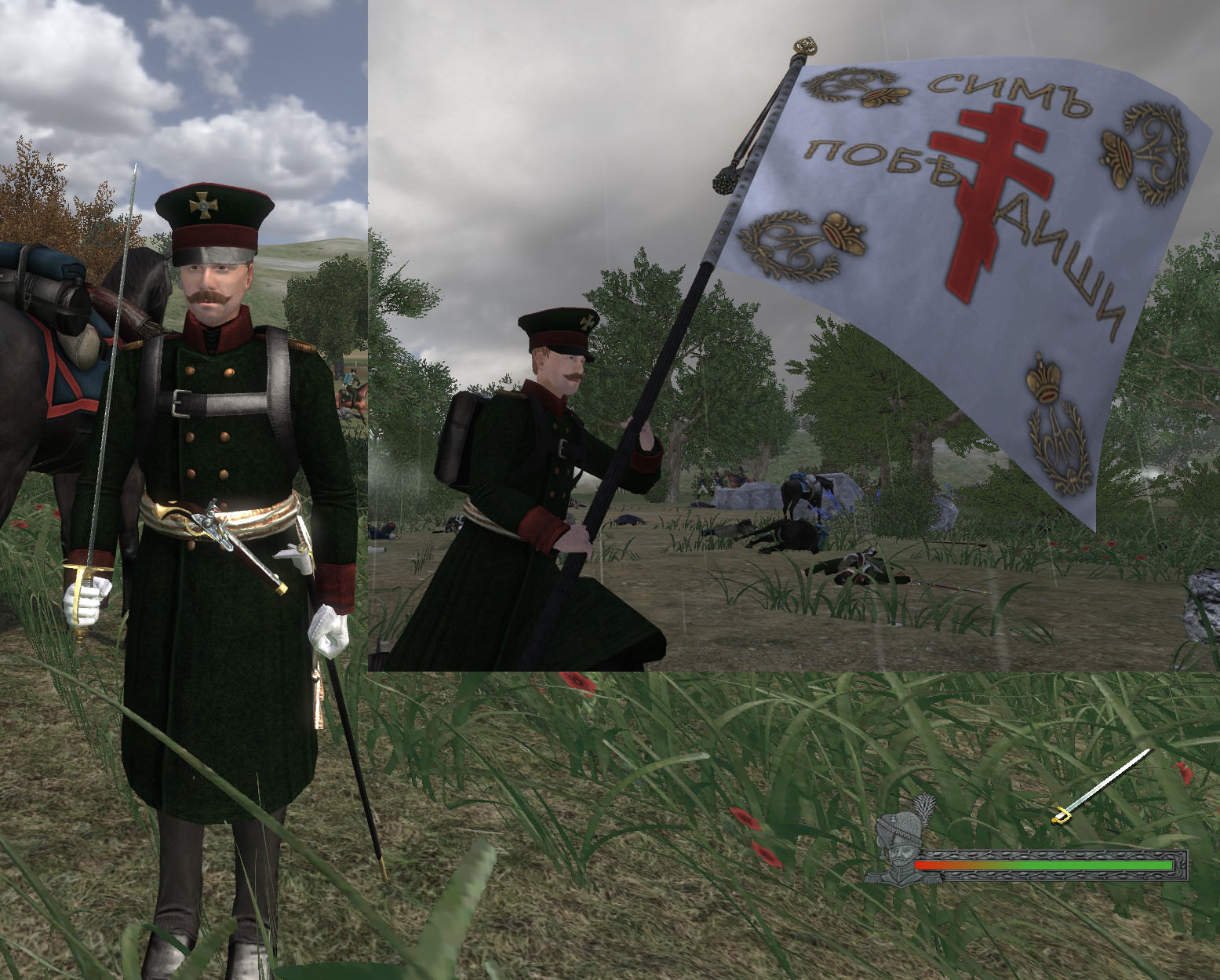 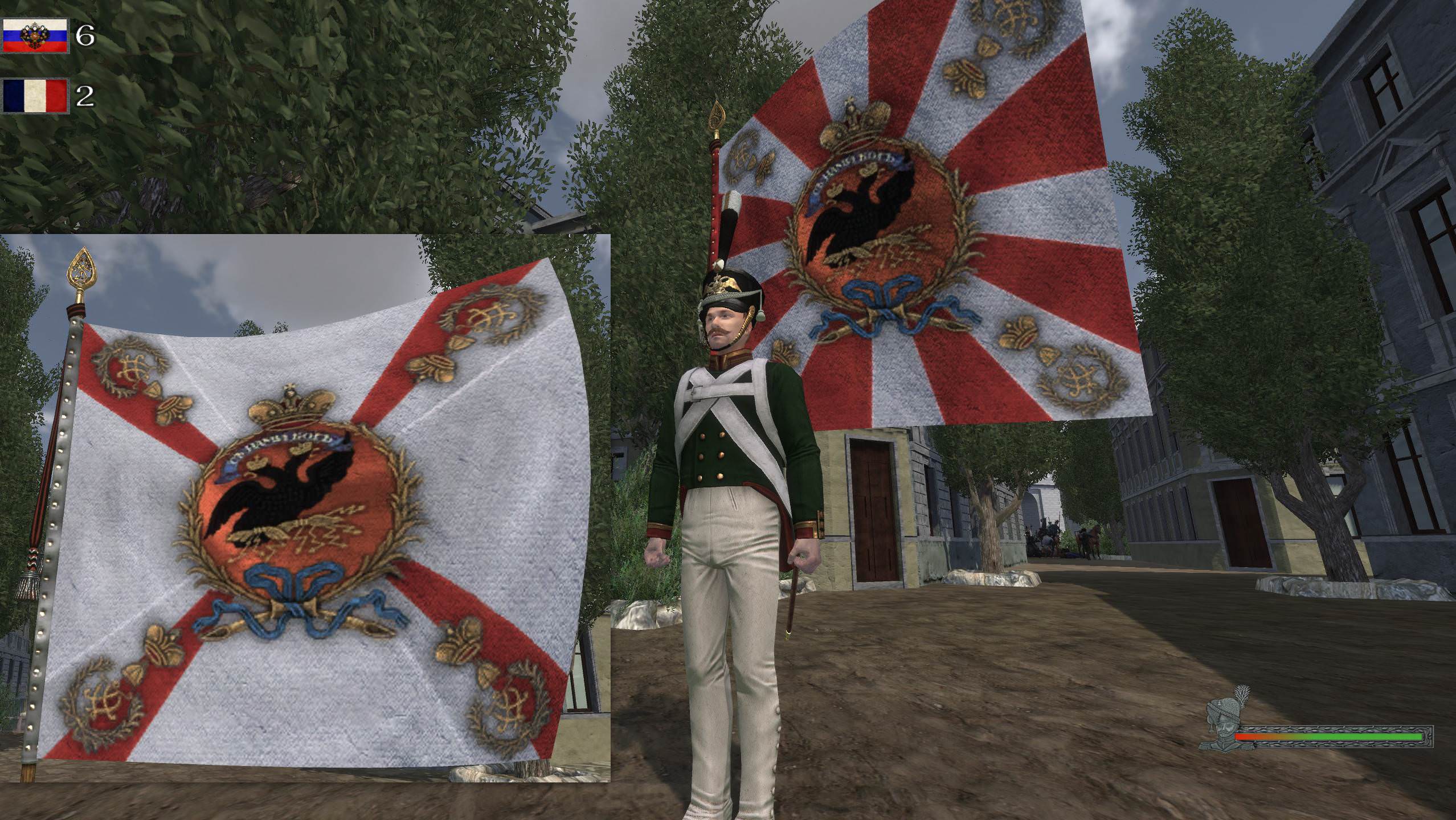 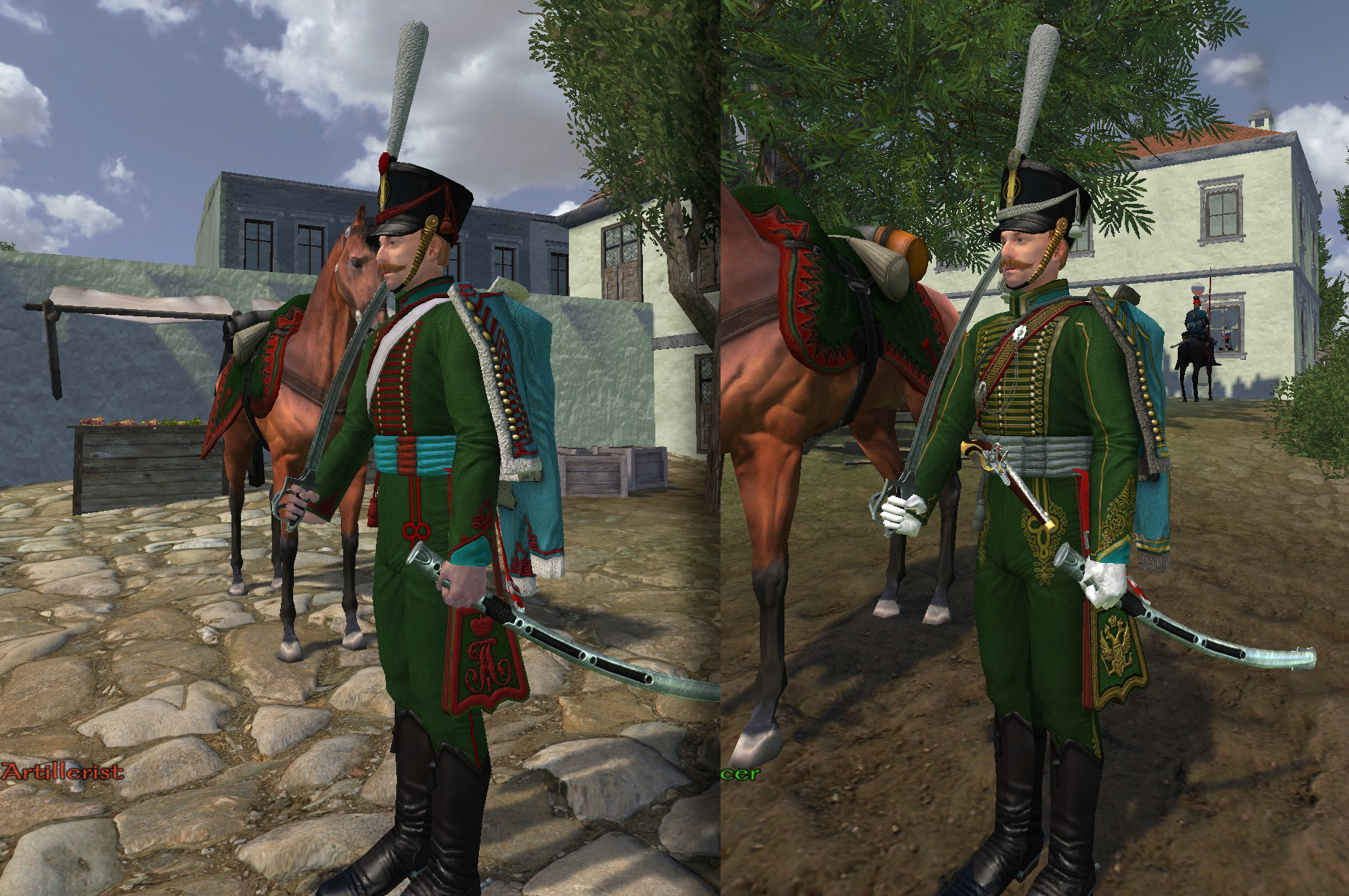 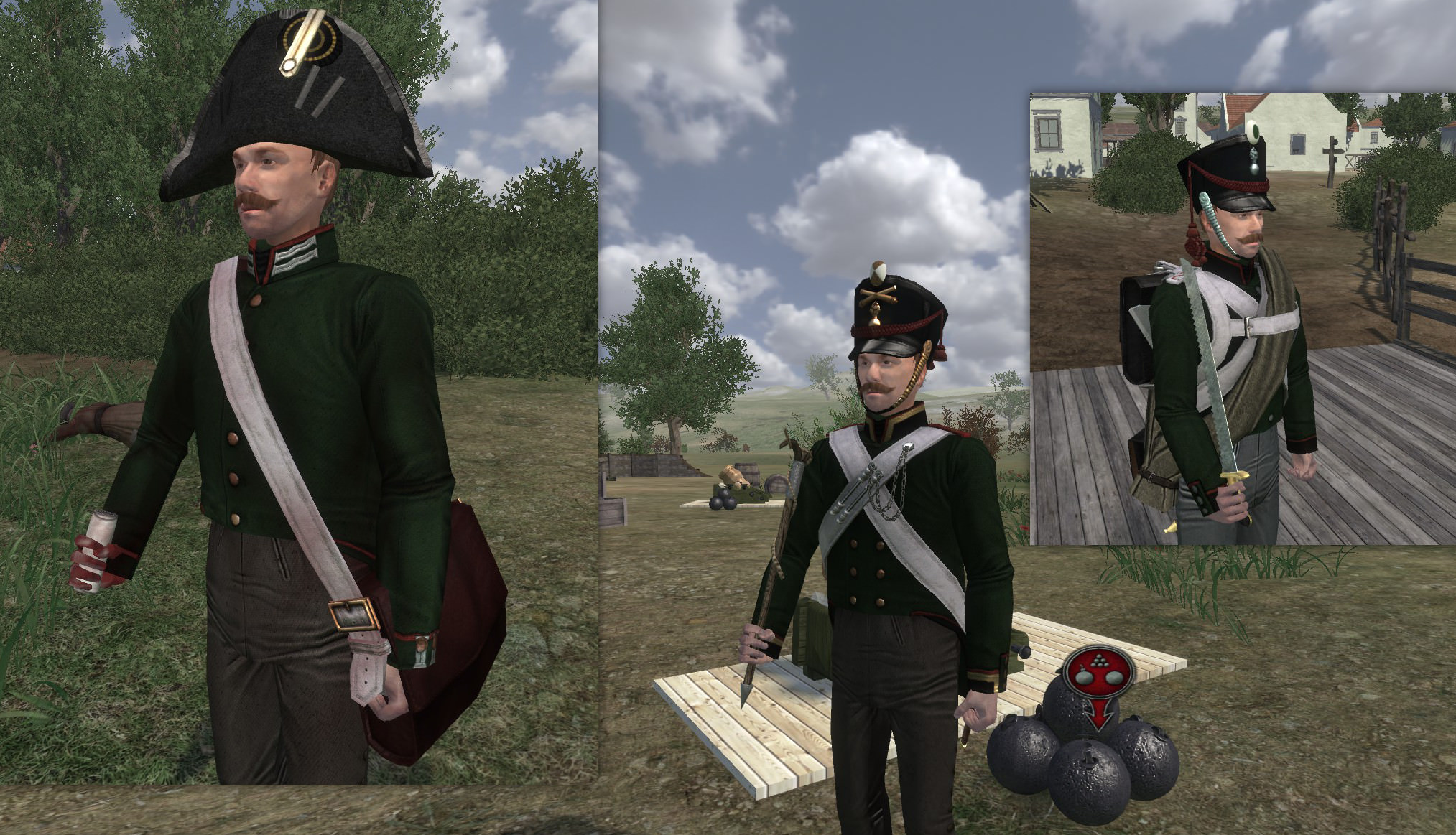 MediaFire is a simple to use free service that lets you put all your photos, documents, music, and video in a single place so you can access them anywhere and share them everywhere.
www.mediafire.com

Install all DDS files into your NW's texture folder, all BRF files into the resources folder, the OGG file in the sounds folder, and the TXT file into the base NW folder. This mod is not compatible with any other Russian reskin or reskins that modify mmmaterials.brf, mm_colours.brf, or mm_confederate_uniforms or _materials.brf.
Last edited: Feb 7, 2021

Tiny update, Version 4:
-Replaces the regular flaming grenade on the artillery shakos with their own unique flaming bomb with carrying handles.
-Adds a grenadier-style three-flame grenade to the Jägers, since I earlier made them represent a sharpshooter platoon (which belonged to the grenadier company in each battalion).
-Removes metal chinscales for regular infantry, pioneers and artillery; only guardsmen and cavalry have them now.
-Adds a chin-strap to the Pavlovsk Grenadiers' mitre.

The 2016 Demo was better than the current game
2