Dejan said:
Nothing changed in regards to player death with this update. The player can't die in battles.
Click to expand...

wish we had an option to enable this

They said they will implement it, and then continue to develop it. So thats probably what he means by first parts.

I would be absolutely content with delaying the terrain system indefinitely if that meant we would get full dialogues, or civil wars, or any diplomacy options except war....

Just installed 1.6.3, and there is still no music or instruments in the tavern....

Expect to see these features in the near future:

Wooooot thx Taleworlds!
-Installing now and ill give feedback and bug/crash reports
-People complaining they want the patch this week but it's not stable should be pepeclapped for crying about crashes.
go back to 1.6.2 if it's not working for you.

Dejan said:
The base value is indeed 2% but this is then modified with hero level, medicine level and specific perks
Click to expand...

Hmm, as far as I know, the perks, as they are presented now in the game, only have pros and no contras.

By medicine, I suggest, you mean the "Medicine" skill level, right? Not sure how does hero level affects the death probability (does it make the death chance higher or lower?), but considering that the perks are only give something good without any negative size, can we, in theory, get an immortal AI lord which will only die from old age just because he had high medicine skill + some perks? What makes the death probability higher?

*sigh*
look one thing if i fight on a scene and take a risk. yes in this case I put my companions in harm's way. Their life and death depend on how I manage my troops. I have control over the situation.I have specific weapons, armor, and shields to minimize the chance of them being killed.
In simulated battles now I have no control. My companions may die just because of a bad number.

vonbalt said:
seconding this, would be a lovely addition to the game and make the dynastic system more important
Click to expand...

Yes, death is important feature for the dynasty system and the world changes and add fear on the player of losing his "perfect soldier"

Better than nothing I guess.

it will be implemented and brought in .... but in phases. Not all at once.

Interested to see how the death rate affects the game.

Dejan said:
We aimed for 5 - 10 hero deaths per year in total (simulation + mission). The base value is indeed 2% but this is then modified with hero level, medicine level and specific perks.

There's a chance that they will die in all battles, not just the ones where the player is involved.

We're working on various localizations in the background but they're not available to players at the moment.


Nothing changed in regards to player death with this update. The player can't die in battles.

Yep it seems to me that severals ago, I could learn the death of a heroe in a battle I was totally not involved in, but no longer. Still, there are sometimes a lot of deads ! And since I start to know a bit all of the heroes, I'm a bit sad each time lol, except for a small bunch lol


vonbalt said:
this already happens if you enable the death settings starting a new campaign, they just expanded it to AI x AI fights aswell (previously death only occurred in battles the player was active in) and rebalanced the death rate from 10% to around 2%.

You can just disable this setting starting a new campaign to not have deaths in battle, personally i love this feature
Click to expand...

Provided the number of deaths I noticed in the battles I'm involved in, if - like it seems to be - heroes can die in any battle happening in the word, I guess 2% is enough to remove a lot of people - + death in childbirth for females !
Just please fix that defective AI and high tendance from it to turtle even when overwhelming us... that's a pain


Althix said:
that's not a good thing. so what that means is, my companions have a chance to die due to rng. which means my time and efforts would be wasted because of bad roll.
Click to expand...

That's part of the game if you choose to allow death. Avoid battles where you're outnumberered, those ones are often nasty...
I remember one companion getting a couched lance next to me..
I understand for the efforts to make a companion grow... sometimes I think "if he could be ok before he dies from natural death !"

Madeloc said:
That's part of the game if you choose to allow death. Avoid battles where you're outnumberered, those ones are often nasty...
I remember one companion getting a couched lance next to me..
I understand for the efforts to make a companion grow... sometimes I think "if he could be ok before he dies from natural death !"
Click to expand...

He is not talking about player battles. A companion running his own party is going to simulate the battle, hence the rng!

@Dejan clan member chance set to 0% stops them from dying in their own simulated battles? I presume yes

Khada still got the long glaive and noble bow....and now they're mine!

Have been playing the 1.6.3 for a few hours and I think heroes death (in AI x Ai battles) had disappeared in 1.6.2. (hadn't seen the messages in purple for a moment).
At the moment, with 1.6.3 , in about one hour I've seen at least 3 heroes dying in battles I'm not involved at all. Almost scaring !
Must not be easy to balance the "dying rate"...

Ananda_The_Destroyer said:
Khada still got the long glaive and noble bow....and now they're mine!

Dejan said:
We aimed for 5 - 10 hero deaths per year in total (simulation + mission). The base value is indeed 2% but this is then modified with hero level, medicine level and specific perks.
Click to expand...

I think that 2% is still way too high.

If you imagine between 5 and 10 deaths per year, let's say 7 on average.

I'm not even sure if there are that many in all factions, it's going to be very quiet on the map...

Moreover, no player will get attached to the characters since they will all die one after the other very quickly, each companion/lord will be just a vulgar "bots" without any flavor, a name vaguely heard once during a battle and replaced by another bots which will itself die very quickly.

Yes, the dynastic aspect and death is a really nice feature, bringing another dimension to the games. But it must be customizable by the player (with much more precision than now) and must be RARE to be memorable and have a real emotional impact.

Why not implement some kind of injury system as suggested in another post? Falling in battle would require some sort of recovery/rest to heal without which future battles would increase the risk of dying.
Fallen and defeated lords would have to rest in a fiefdom or could take up arms again, but with great additional risk.

This would make combat victories impactful, with real consequences, rather than having defeated lords reappear on the map 3 minutes later with a small, fresh troop after fighting to defeat them.

That's my opinion anyway, sorry for my English. 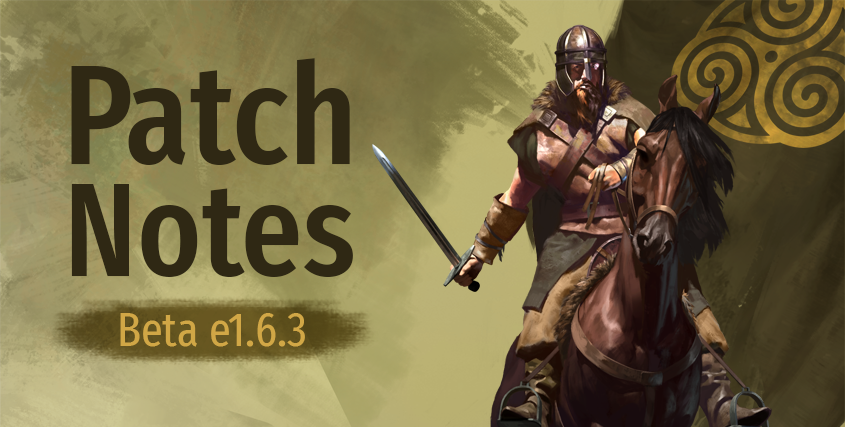 I report two bugs
1. In the player's army, if the soldiers in the front row hold a shield, the spear or spear used by the soldiers in the back row will pass directly through the shield in front.
2. The experience of "Hall war" is too poor. I mean, when players capture the enemy's wall, players can lead their troops to attack the enemy's hall, but what we see is a large number of people crowded in the hall, which is not tactical at all. I suggest that this function be redone. My suggestion is:
Add the fortification construction function to the "city defense war". Players can transform the castle or city they occupy, such as changing the stacking angle of city walls, building arrow towers, traps, stacking sandbags on the street, etc. When the enemy breaks through the player's wall, the player deploys his troops to the fortifications in the street and continues to fight with the enemy. When the enemy breaks through the street, the enemy will surround the player's hall. The player can choose to break out of the hall, or ask to duel with the commander of the enemy force (the enemy commander can agree or refuse). If the enemy commander refuses, the player can only lead the guards of the Hall (the guards of the hall can be selected by the player) Break out of the castle. Similarly, players should go through these three steps to attack the enemy's Castle:
City wall battle - Street Battle - surround the hall

Penn said:
Just installed 1.6.3, and there is still no music or instruments in the tavern....

fixed, I have music in the tavern, and npcs with musical instruments
You must log in or register to reply here.