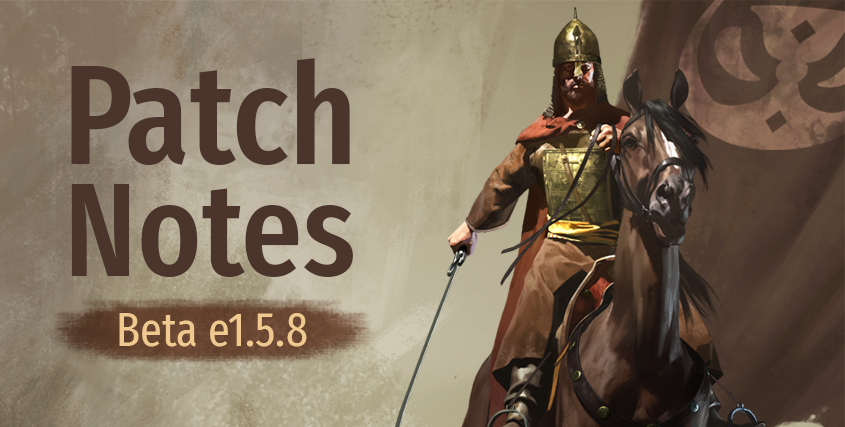 Good job in SP, but I hoped for some real multiplayer content.

9 Battanian helmets? Very curious to see what they made.

Goddamn though, loving the options for what you can do to conquered settlements. Makes me want to try 1.5.8

Finally some fixes to how the armor values work. Seems good.

this is for 2% mp community. Add battle and better mods tools.

I'm so glad that

I see many cool features. I really like it. And, i also have a question.. Important one that related with the thing below:

Improved the battle formations spawn system. Formations will now spawn within one of the four flanks during open field battles (from front to back order):

Considering a random spawn system that will automatically activate after the number of enemy soldiers and our soldiers are proportionally compared? This active random spawn system should provide a one-time or multiple deployment of troops. This should be completely random and continuously variable.

I strongly think that we need this next step after path's "battle formations spawn system" improvement.

Thanks you guys for you continuous work on this game. Patch seems cool and sooner than expected. Keep up the good work.

Added Pillaging: Players and AI can now choose to 'Devastate', 'Pillage' or 'Show Mercy' to settlements that have been successfully sieged.

That one is awesome. Alot of other really cool stuff also but this feels like a feature that is well in place with the game. Same with the battle formations.

Is this savegame compatible?

Are keep battles and prison break scrapped or still being worked on?

Thank you! Quite a few interesting additions! Am going to focus on my studies for the next two days, but I will start a playthrough SOON. First short feedback on the things that caught my eye:

1) The Pillaging Feature is looking really fun. It makes me wish even more-so that bandits could pillage villages at least, and even more if possible, like pillage castles/towns at one point (still really wishing for true bandit heroes that can amass big bandit armies, that would just be my favorite thing. Imagine joining/or fighting a big party of 100-200 looters just because a madman is leading them, that's epic).

2) Finally a fix to troop spawns? I hope the formation spawns fixes means that my heavy infantry won't spawn lots of meters ahead if I do a village battle. That would be really, really good if that is what it means, but it might just be for open field battles so no village fix yet? Hopefully it includes village spawn fixes as well. And being able to change deployment sounds really good if it means we can choose where our troops deploy (archers in front and infantry in the back as an example opposed to the default deployment, if that is the case then it's 100% awesome).

3) Some fixes to siege, better weapon selection for troops, and the last throwing weapon will be used as a melee weapon instead? (so can I give my companions a full inventory of thrown weapons and they'll use the last one as a melee weapon? Sounds cool if so. Also "take enemy armour into account when selecting a weapon", I wonder if this means there will be better effectiveness of certain weapons vs certain armors in the future. Like cut/pierce/blunt damage vs different properties of armor, and one is clearly more effective than the other.

4) 200+ notables giving elite troops + Pillaging reducing power of notables. This sounds like good tactical decisions to weaken a faction. I wonder if the AI will pillage oftentimes as well, or will they be merciful? Do they take into consideration their traits for these decisions? And will they ever actually pillage their own culture, or is that a definite no-no? Definitely a system that can potentially get very in-depth.

5) And for multiplayer: "Changed the defender morale effect when the attacker has the Keep flag from '6 / sec' to '[number of flags captured] / sec'."
Does this mean that no more instant G capture for easy win at the start of the game? Would it take 6 times as much time to do so? Oh my god I'm going to miss this actually, it was so much trolling and fun. I know some will prefer it this way (with the change), but that was so much fun I can't lie xD Time to go for other flags before G I guess, but can still go for flags like F instead ?. Good change nonetheless, it makes total sense that you should capture the other flags first before you are allowed to maximize the efficiency with which you capture the G flag. It was pretty unfair for the defenders, truly, but hell it was fun as an attacker. Some maps were exceptionally fun for the attacker because of being able to do this, so hopefully this won't make them less fun. We will see how this will affect balance, and which maps are now too difficult to conquer... this seems like a true buff for the defenders, which will receive a bonus even if they manage to hold at least 2 flags at the end of the game. It is a good change though, so must agree with it.

6) barbers no longer carry weapons. Finally, I was really getting worried when approaching the all-mighty barbers of Calradia. They were really intimidating for some reason. Maybe I've read one too many barber creepy pastas in my lifetime, but thank you truly.

menuisier100 said:
Are keep battles and prison break scrapped or still being worked on?
Click to expand...

They're being developed, not scrapped.
You must log in or register to reply here.