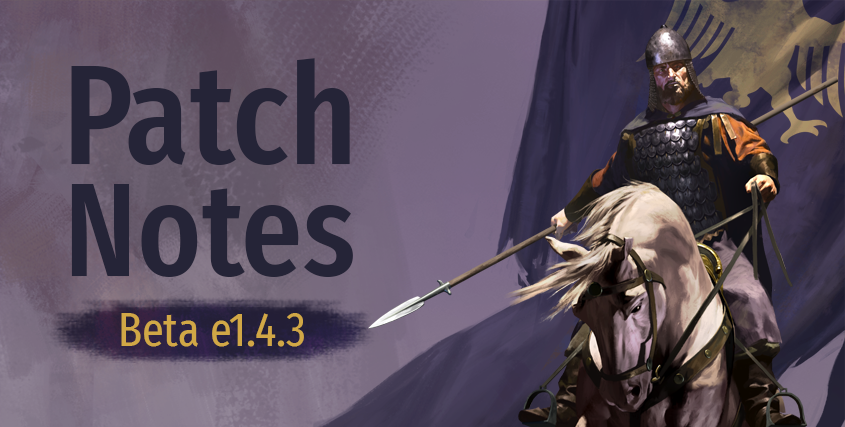 "Matchmaker now balances teams after arranging a match." - Can we get more info on how this works?

Phew, I was checking 1.4.2. and being horrified of so few changes but now I see I was looking at the wrong patch lol

Is this the Code refactor Update?

Adjustments to the hideout encounter.

This forum has long yearned for these!

So nothing really for mp.. and all two handed weps crush through on overhead or just maces? If its all i have lost all hope.

billz4money said:
Is this the Code refactor Update?
Click to expand...

Thank you for the rest!

Fixed a bug that caused troop formations to reset after saving and loading the game.
Added 7 new riding perks for the campaign side
Adjustments to the War and Peace evaluations.
fixed a bug that caused the wrong encyclopedia page to open upon clicking the name of the conversed character in conversation
Added a new system for XP sharing, where after a battle a portion of upgrade XP earned by troops will be distributed to the rest of the party.
This will allow players to open conversations on the campaign map with other parties much faster and without a loading screen.

An auto-blocking option was added for single player.
Lol causals

Fixed a crash that happened when the main hero was executed because of crime rating.
Bring it!

I hope that Kings do not get every single captured settlement anymore in this patch.

Thanks for the work and info!

Noschkov said:
They refactored some code so you will have to redownload all the refactored pieces again
Click to expand...

Look at the file sizes. The files containing code do NOT account for 15 GB. Most of the bigger files will be for textures, models and such, not code.

Callumen optimized for better performance during crafting. said:
Save & Load

oh please!! tell me that it means that we won't need any longer to reassign the troops to the wished group each time you load the game!!!

oh please!! tell me that it means that we won't need any longer to reassign the troops to the wished group each time you load the game!!!
[/QUOTE]
Oh I hope so, I mean what else could it mean? This a big QOL upgrade though. Having dependably sorted troops will make things way smoother for me. Look out AI I have big ideas!

Noschkov said:
They refactored some code so you will have to redownload all the refactored pieces again
Click to expand...

Since when refactored code takes 15 GB?

I'm wondering what takes 15 GB as well? Are we going to see some new scenes or lots of models etc?
You must log in or register to reply here.